GARY NUMAN: Asperger’s is my superpower – It was behind his hit singles

When Gary Numan says something’s weird, you know it’s very weird. This is a man whose idea of a ‘quite normal’ family life is living in Los Angeles in a house that looks like a castle with trapdoors and secret passages, complete with a 20ft bronze dragon in the garden where others might have a garden gnome.

The pop icon is talking about how his second facelift involved having his skin hoiked skyward to such a degree that he has to shave behind his ear.

‘I have to kind of pull my ear forward,’ he says, demonstrating. So he has stubble in places it shouldn’t be? ‘Yeah. I haven’t shaved today so I can feel it. Isn’t that weird?’

Weirder still is that he says he’s ‘not that bothered’ about cosmetic surgery, having only had two facelifts (and five hair transplants). It’s his wife Gemma who’s the true addict. She’s had, well, everything, up to and including full body lifts.

‘Gemma’s well into it. She’s had everything done from her earlobe to her little toe. I had this lift done about a year and a half ago.

Does it make him feel younger though? ‘Nah,’ he says. ‘You still grunt when you stand up.’

There always was something not-quite-of-this-world about Gary Numan. That was part of the appeal.

When he first appeared on the British pop scene in the late 70s, the ‘godfather of synth’ seemed to have stepped out of an alien spaceship (although in fact he’d worked in a WH Smith near Heathrow before fame came calling). He had bleached hair, heavy eyeliner (applied by his mum, but he didn’t shout about that), and his voice was once famously described as ‘pitched between Gene Pitney and a Dalek’.

He had his first UK number one with Are ‘Friends’ Electric?, and by the age of 21 he was worth an estimated £6m.

His army of fans called themselves Numanoids. He even married one. Gemma decided at school that she was going to be Mrs Gary Numan when she grew up. 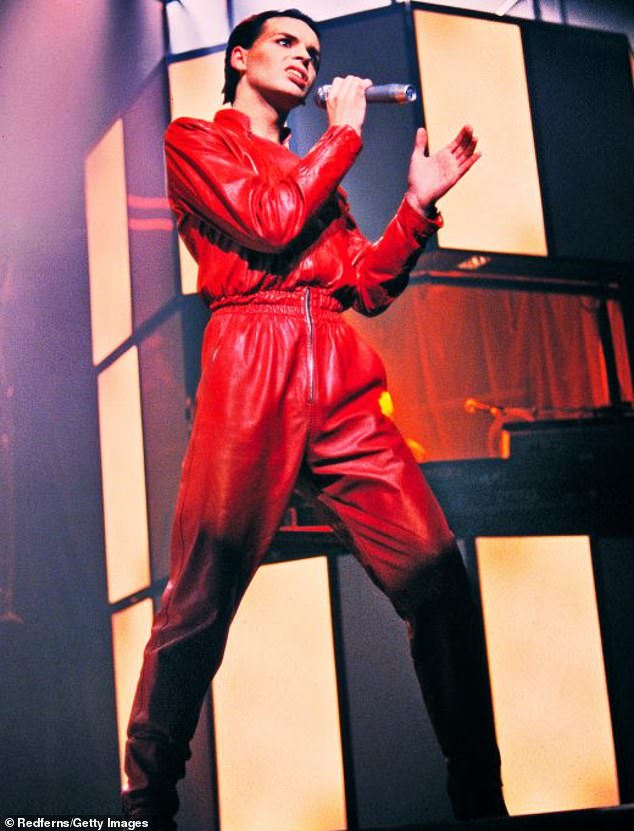 Gary in his heyday, performing at the Warfield Theater in San Francisco in 1980

They didn’t get together until she was 24, but they’ve been inseparable ever since.

‘This is going to sound corny, given that it’s 30 years and four days since our first date, but I miss her even when she’s in a different part of the house,’ he says. ‘She’s everything I am not – which is most things, really.’

Then, in April 1981 at the height of his popularity, he announced his retirement. It was, he says today, ‘a terrible mistake – and one I’ve spent 40 years trying to correct’.

Within two years he’d started a comeback. Who knew it would be a 40-year comeback though?

This year he achieved an ambition he says required near superhuman obsession: a symbolic return to Wembley Arena (now renamed the OVO Arena Wembley), four decades after he last played there. In May he strode onto that stage once more, but not before his wife had coaxed him into it.

Now a new documentary that follows his progress captures footage of Gemma comforting him as he shakes backstage, almost paralysed with fear. ‘I was overwhelmed,’ he admits today.

‘I was losing it. She calmed me down, as she’s always done. I wouldn’t have been able to do it without her – any of it.’

Gary Numan Resurrection on Sky Arts is an extraordinary insight into an extraordinary man, acknowledged as an influence on stars such as Prince and Lady Gaga. The film gives the most moving account yet of what it means to live on Planet Numan.

Much of it tells the story of his lifelong relationship with Asperger’s syndrome (a form of autism), a condition that contributed towards his expulsion from school, was a major factor in his retirement and, to this day, puts him at odds with the rest of the world.

How has he conquered it, or perhaps embraced would be a more accurate description? It’s easy, he says: he married Gemma.

Born Gary Webb in Hammersmith in 1958, the son of a British Airways bus driver based at Heathrow, he was clearly a bright kid. He won a grammar school place but by his teens had been identified as a troublemaker. His headteacher described him as the most disruptive pupil he’d ever dealt with.

At the age of 14 he was referred to Dr Eva Frommer, a psychiatrist who controversially used drugs to treat depression in children.

She put Gary on Valium and Nardil, which he says left him in a ‘zombified’ state. She also mentioned something called Asperger’s, but no formal diagnosis was made.

‘I don’t know that I was ever officially diagnosed. I’ve read since that the diagnostic criteria wasn’t finally established until the 80s.

‘I think it was seen as a new thing then. To be honest, I didn’t care. I just saw it as a nice day out in London with my mum.’

His parents freaked though and stopped him seeing Dr Frommer. ‘My mum took exception to the Asperger’s because she saw it as a reflection of their parenting.

‘There was no mention of it again. Funnily enough I never joined the dots until I met Gemma, who knew a bit about it because her brother had it.

‘I went through young adulthood thinking I didn’t have friends because I was unlikeable.’

He was always obsessive about things he was interested in – aeroplanes, sound, that point when sound crossed into music. He would go on to excel in all this, famously becoming a pilot and forming an aerobatic display team.

But it was his experimental electronic music that would make him famous. He did try the traditional band route, but his band mates clearly found his behaviour odd.

‘I was thrown out. They didn’t tell me. I just turned up and they had another singer. I started following them round like a puppy, but they didn’t want to know.

‘Things like that were traumatic, but I just came to the conclusion I was quite unlikeable.’.

He started to channel his feelings into his music. But he was not a poppy sort of pop star, and as success beckoned he struggled with the industry.

He’d get overwhelmed at functions, and had no clue how to talk to record company executives. He still doesn’t.

‘I go to functions now only rarely, but I’m baffled by them. Gemma’s brilliant though.

‘She can sit at any table and talk to anyone about anything, all day. I’ve learnt the mechanics of communication from her.’

He’d seen Gemma at gigs ‘for years’ before asking her on a date, but the chances of them becoming a couple must have been low? He nods.

‘Having a relationship with a fan is difficult because all the things fans see are carefully chosen. They have the poster where you look incredibly handsome, but that’s the 300th picture that was taken and in the other 299 you look a bit s***.’

What of his ‘issues’? He says they were obvious. ‘I have problems with communication, talking to strangers, eating out.

‘We’d be going to a restaurant and I’d pick a fight on the way so we ended up going home. Eventually she said, “Why do you do this? Why are you so unhappy when we leave the house?”’

It sounds as if she was the first girlfriend to question his behaviour rather than walking out. ‘She was the first one who didn’t put it down to me being a moody s***. She gave me coping mechanisms.

‘She didn’t change my personality, she gave me the tools to express it. When I get Aspergersey, she tells me.’

By the time they hooked up Gary’s career was all but gone and he was £600,000 in debt. He’s been back earning for many decades now, but he still feels their relationship is unbalanced.

‘She gives me much more than I give her,’ he says.

Their lifestyle sounds a bit ‘woowoo’ Los Angeles (they moved there in 2012) and she clearly has a complicated relationship with her body. Theirs has not been the easiest of marital paths either.

They have three daughters – Raven, 18, Persia, 16, and Echo, 15 – but had several rounds of IVF and lost a daughter pre-term. Gary wrote a song about that.

‘I don’t ever write when I’m happy,’ he says. So Gary Numan needs to be miserable? ‘No, but I need to have worries.’

His Asperger’s is not one of those worries any more. It’s taken him his whole adult life, but he’s finally come to terms with his condition, and even sounds quite attached to it.

‘The positives far outweigh the negatives,’ he says, arguing that he sees it as a ‘neuro diverse superpower’, as long as he has Gemma by his side. ‘Otherwise,’ he admits. ‘I’d be lost.’