An award-winning chef who hired a homeless man who he met outside his restaurant has admitted that he only lasted a few weeks in the job.

Gary Usher, 37, who trained at Michelin-starred Chez Bruce in London, offered the man, only known as Derick, a job as a kitchen porter at his Manchester bistro, Kala, in May.

He now admits he was ‘naive and stupid’ to take the homeless man on and says he should’ve asked for professional help.

Gary Usher, 37, hired a homeless man who he met outside his restaurant, but has now admitted that he only lasted a few weeks in the job

Speaking on Radio 5 live, Mr Usher said: ‘He stayed with us for a few weeks. He has got some stuff that he needs to sort out.

‘But for the moment he needs to focus a little bit on himself first. When he does, if he does, he has got a job with us again.’

Mr Usher, who worked with Manchester charity Barnabus, said he paid for a hotel room for Derick for a week, before acting as a guarantor so he could get a flat.

He added: ‘I was naïve and stupid and I should have stood back and put the situation into perspective.

‘I should have got more professional help with it. 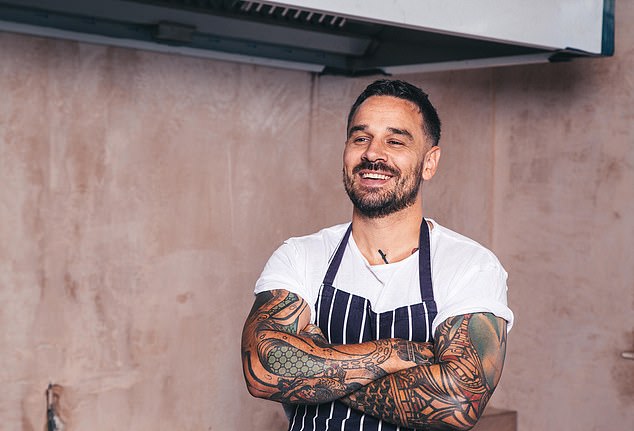 ‘I should have worked much more closely with a lot of the help that was offered to me.

‘I just acted on instinct and I wanted to help. In hindsight I shouldn’t have jumped in in the way I did but I just wanted to take control of the situation because that’s what I am like.’

At the time, Mr Usher explained his decision to his Twitter followers, recalling his meeting with Derick.

He said: ‘Leaving Kala last night about midnight in my chef jacket and got talking to a homeless guy.

‘He asked me for cash and I didn’t have any and there wasn’t a cash point anywhere. As I walked off he shouted, “Mate got any jobs?”.

‘I walked backed to him and said “f****** right I do”. He said he’d do anything. I replied, “mate, you don’t need to do anything, I have a kitchen porter position available and you could do some food prep too”.’

The chef said the pair of them were ‘made up’ following the exchange and met the day after to discuss the start date.

‘I’m buzzing,’ he wrote. ‘I’ve been offering jobs to people on the streets for ten years. Derick is the first person in that time to turn up.’