A protester in New York City threatened on live TV to burn down the city’s Diamond District if Gov. Andrew Cuomo and Mayor Bill de Blasio don’t ‘come out’ to meet demonstrators.

A man who identified himself as ‘Ace Burns’ made the shocking claim on Saturday during an interview with Fox News.

A peaceful protester made a threat on live TV to go down to the predominantly Jewish Diamond District in New York City with gasoline.
pic.twitter.com/bQrf5C4qYn

Burns explained he was leading a demonstration from the Barclays Center in Brooklyn at 6pm to New York City Hall.

‘We hope De Blasio and Cuomo come out and talk to us and give the youth some direction. But if they don’t the next stop is the Diamond District.

‘And gasoline, thanks to Trump, is awfully cheap. So we’re giving them a chance right now to do the right thing.’

During the interview, Burns also mentioned fighting for new policy changes regarding police brutality in the United States. 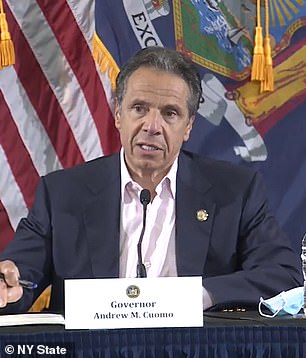 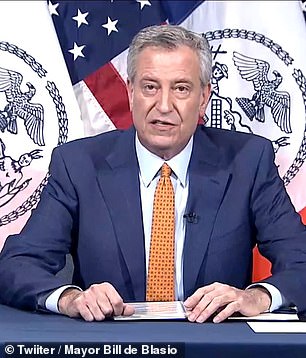 Burns said he was hoping to speak with Gov. Andrew Cuomo (left) and Mayor Bill de Blasio (right) on Saturday during the demonstration

‘The question should be what policies are we going to enact to make people feel safe in their own communities,’ said Burns.

After the incident, the New York Police Department identified the man and brought him in for questioning.

‘Earlier tonight, a man wearing this mask threatened, in a live [Fox News] interview, to burn Manhattan’s diamond district down. Within hours, we identified the man & took him in to be interviewed,’ they wrote.

Fox New host Eric Shawn condemned the claim and insisted such actions were not condoned at the media company.

‘That person was basically suggesting that they plan to go to the diamond district which is run basically by Orthodox Jews here in New York City — certainly hope that is not the case and we do not endorse — in fact, we condemn that type of language here on the Fox News channel,’ said Shawn, 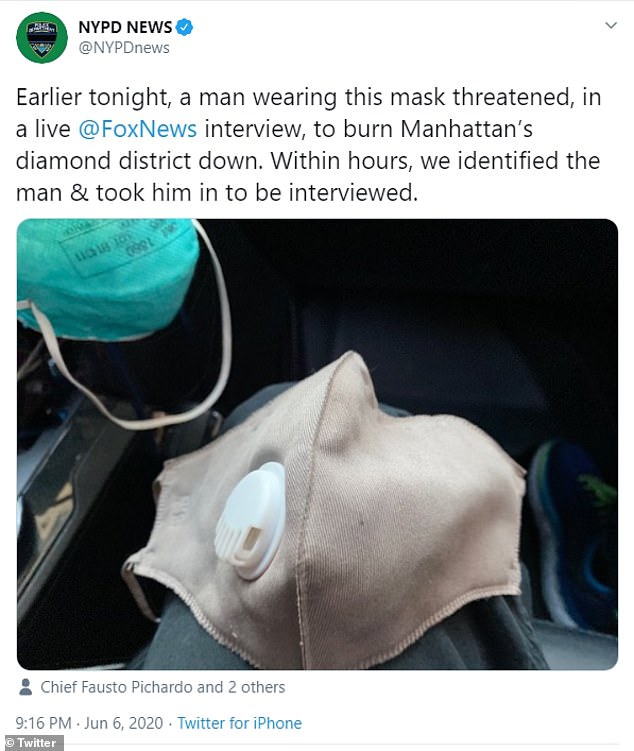 A Twitter accounted linked to Burns showed him in a video reportedly outside the Barclays Center. He says he’s starting a ‘revolution.’

On his LinkedIn account, Burns included a status about a black man who said he was racially profiled while at a Best Buy.

‘This has to end!!! Racism in our society has to become unacceptable, period!,’ the status reads.

He is also reportedly the founder of Koinda Records, according to his LinkedIn. 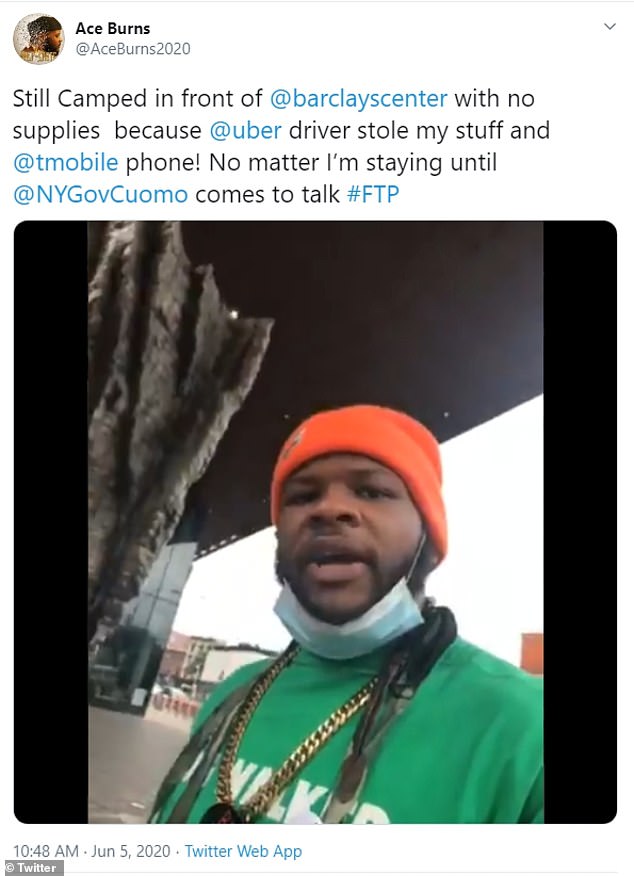 A Twitter account linked to Ace Burns showed him outside the Barclays Center in Brooklyn while waiting for Gov. Andrew Cuomo  to come speak to protesters 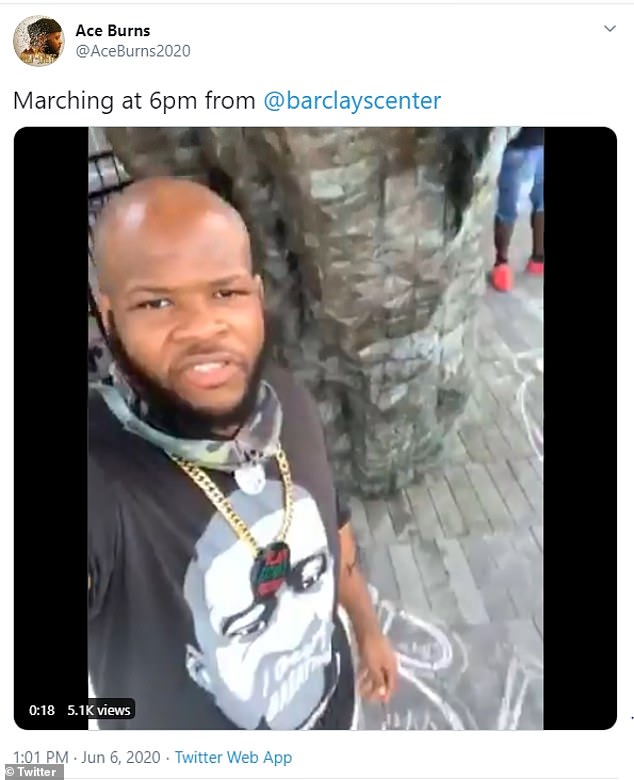 Burns told Fox News that he organized a protests at starting at Barclays Center on Saturday, but its unclear it continued as planned

New York City has become one of many US cities that have become cites for protests over the death of George Floyd, 46, and police brutality.

Floyd, an African-American father living in Minneapolis, pleaded ‘I can’t breathe’ while Derek Chauvin, a white police officer, knelt on his neck for nearly nine minutes on May 25.

Last week, more than 200 people were arrested during a peaceful protest that turned volatile at the Barclays Center.

Multiple people, including police officers, were injured as protesters set fire to vehicles and violence broke out between cops and demonstrators.

Both Gov. Cuomo and Mayor Bill de Blasio said they reviewed the incident, which resulted in a week-long curfew for New York City residents. 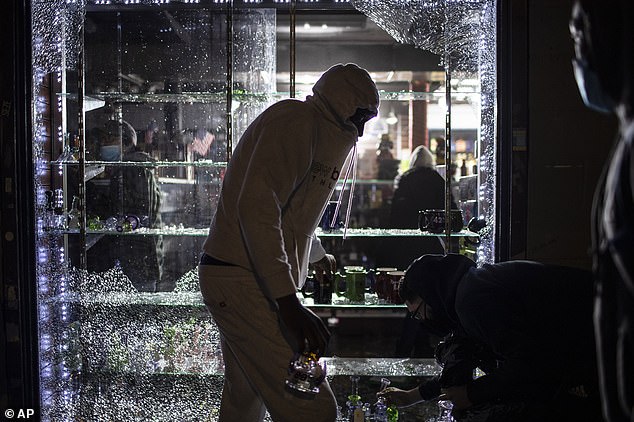 On Monday, luxury store in SoHo and along Fifth Avenue were damaged after looters hit up the pricey shopping districts.

Cuomo said Attorney General James will review the NYPD’s response and the actions from the crowds within 30 days and see ‘what we can learn’.

‘Last night we saw disturbing violent clashes amidst protests right here in New York City, and I’m asking Attorney General James to review the actions and the procedures that were used last night because the public deserves answers and they deserve accountability,’ Governor Cuomo said.

In a separate press conference on Saturday, Mayor de Blasio said he was upset by videos of confrontations ‘where protesters were handled very violently’ by cops and by reports that at least two elected officials were among the people sprayed with irritating chemicals by officers at the scene.

In a video that has been widely circulated on social media, one NYPD officer was seen aggressively shoving a 20-year-old female protester to the ground. 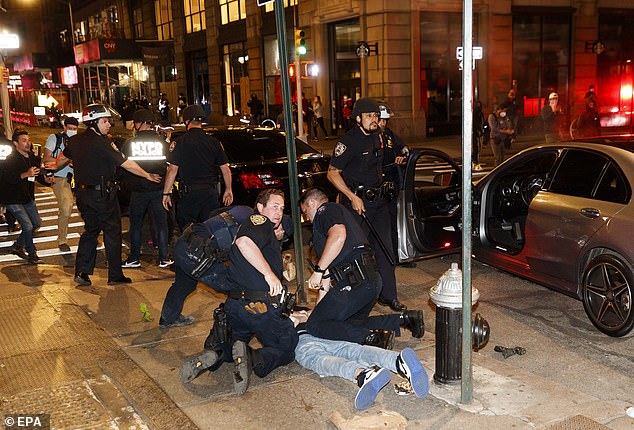 Dozens of people were arrested in Soho on Sunday night, including the driver of the car. Cops knelt on his back to subdue him

‘Anytime you see a protester just arbitrarily thrown to the ground by a police officer, that does not reflect our values, that’s unacceptable and there need to consequences,’ he said.

De Blasio has since announced the NYPD would undergo major reform, including suspensions and disciplinary actions against officers who used rough tactics to ensure curfew.

‘This will be the work for the next year and a half of this administration: To make more change, to make it urgently, to make it powerfully, to make it clear,’ he continued. 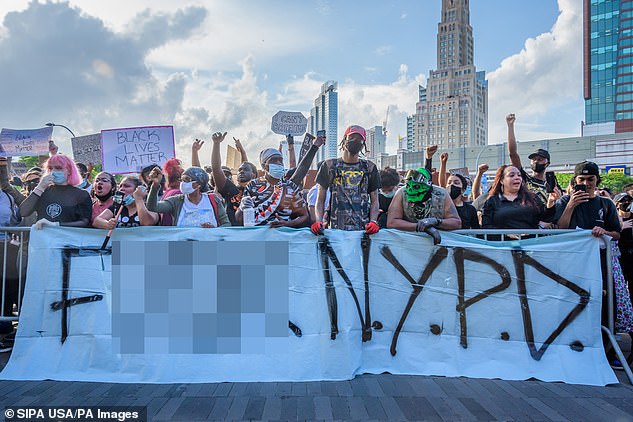 Protesters gathered in the early evening outside the Barclays Center in downtown Brooklyn. The 3,000 strong continued their demonstrations into the night

‘And that work will proceed immediately. And you will see those results and you will judge for yourself, as all New Yorkers do.’

De Blasio said there are adjustments that continue to need to be made to the NYPD response to peaceful protests, but praised the department’s ‘overall restraint levels.’

The mayor there have been occasional instances of police behavior that needs to be reviewed by NYPD Commissioner Dermot Shea.

‘Each night we see – certainly several – situations that raise real questions. Individual instances where our officers have taken action that raises a valid concern,’ he said.

‘In each and every case, there must be a full investigation, and where discipline is warranted, it needs to be speedy,’ the mayor said.

‘The vast, vast majority of officers do their job, do it right. But when someone does something wrong, as in all of our society, there must be consequences. Commissioner Shea made it clear yesterday, disciplinary action is about to be announced, some will include suspensions of officers. There’s a lot going on.’

The curfew will end Monday morning at 5am, the same day that New York City is set to enter Phase 1 reopening from pandemic lockdown.