The majestic gates which guard the entrance to Blenheim Palace, Sir Winston Churchill’s birthplace, have been given a golden makeover.

The imposing 20ft tall iron gates which were installed at the palace in 1852 have been painstakingly restored using over 6,000 leaves of pure gold.

The £35,000 restoration was undertaken by gilder John Naysmith, of the Oxford Iron Company, who used high-pressure water jets to blast the old paint off the 17 tonne gates. 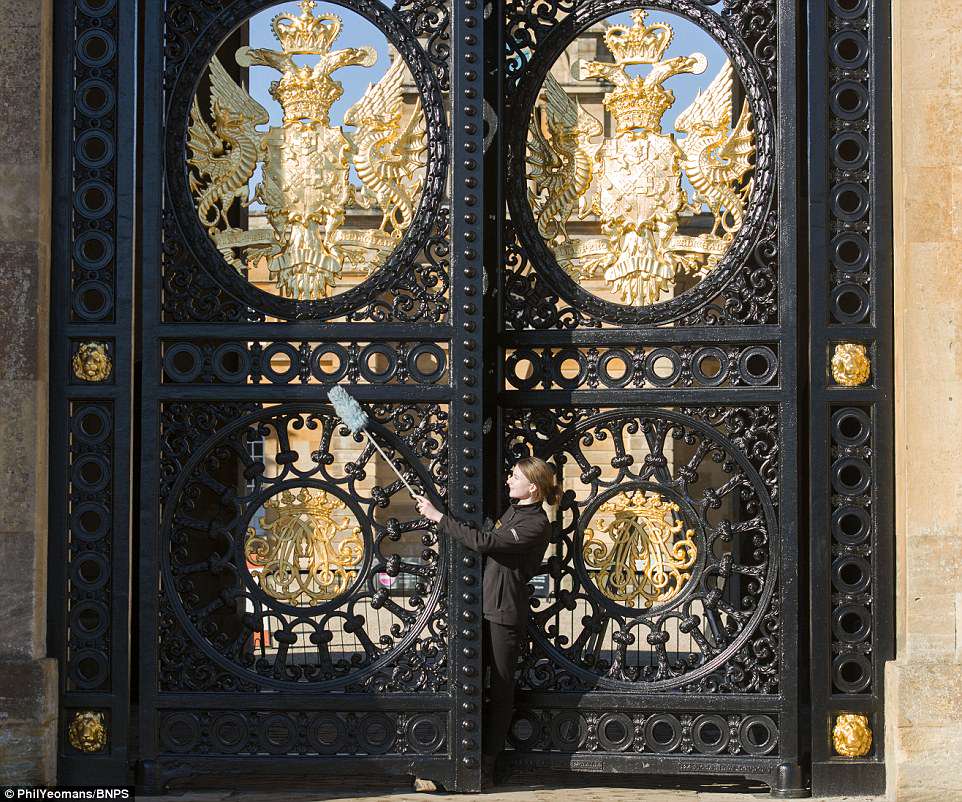 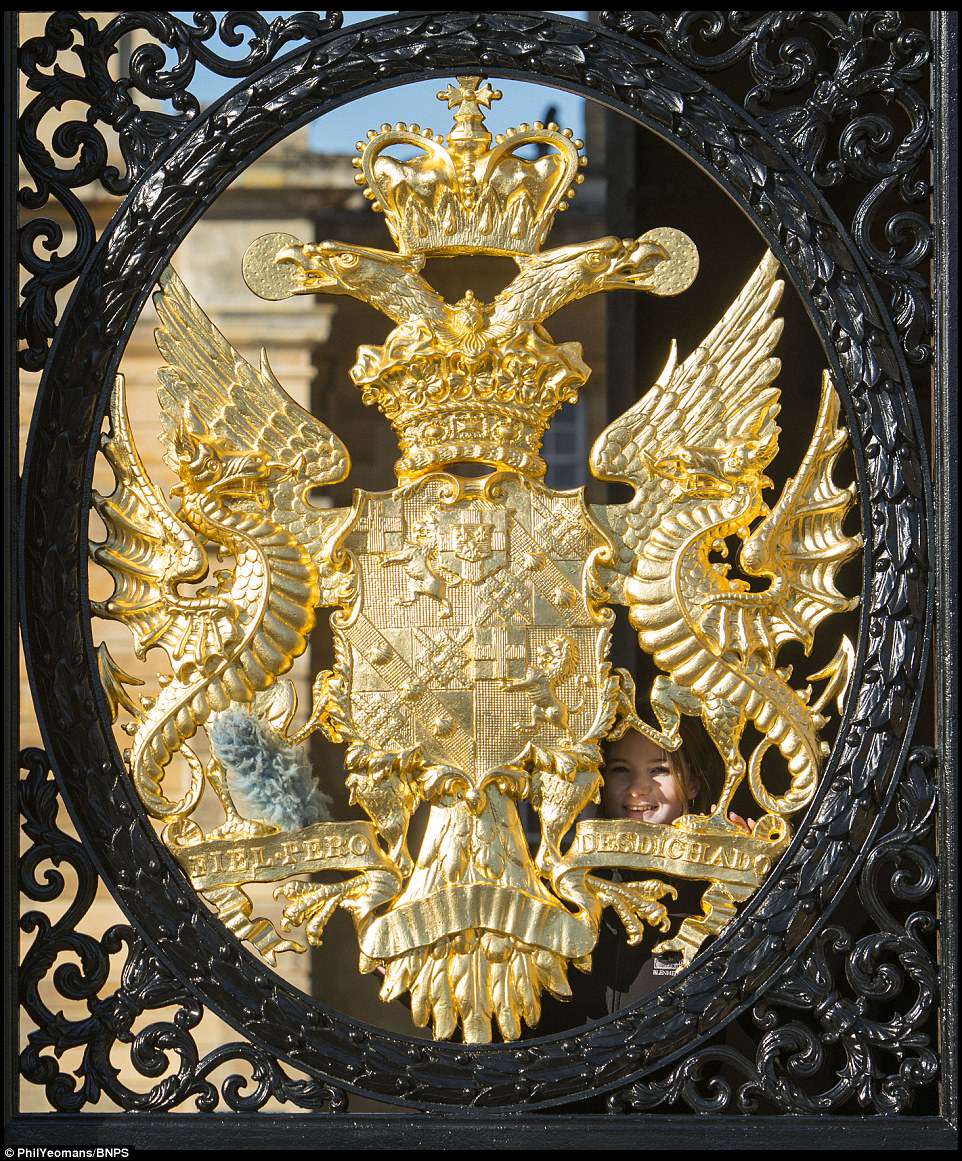 The gates have been fully redecorated, including regilding with 23¾ gold leaf and are now on show to the public

He then painstakingly re-painted the gates, which are the tallest on a private palace in Britain, and applied 240 books of gold leaf to the Marlborough coat of arms and crest designs by hand.

Mr Naysmith said: ‘Restoring gates of this size is quite a challenge, we used the water jets to take the paint back to the original metal and then began to re-apply coats of paint before starting work on the gilding.

‘We had to build a workshop around them to maintain some heat for painting and gilding as it was -5C outside on some days.

The palace, park, and gardens are open to the public on payment of an entry fee and it also plays host to a mini railway 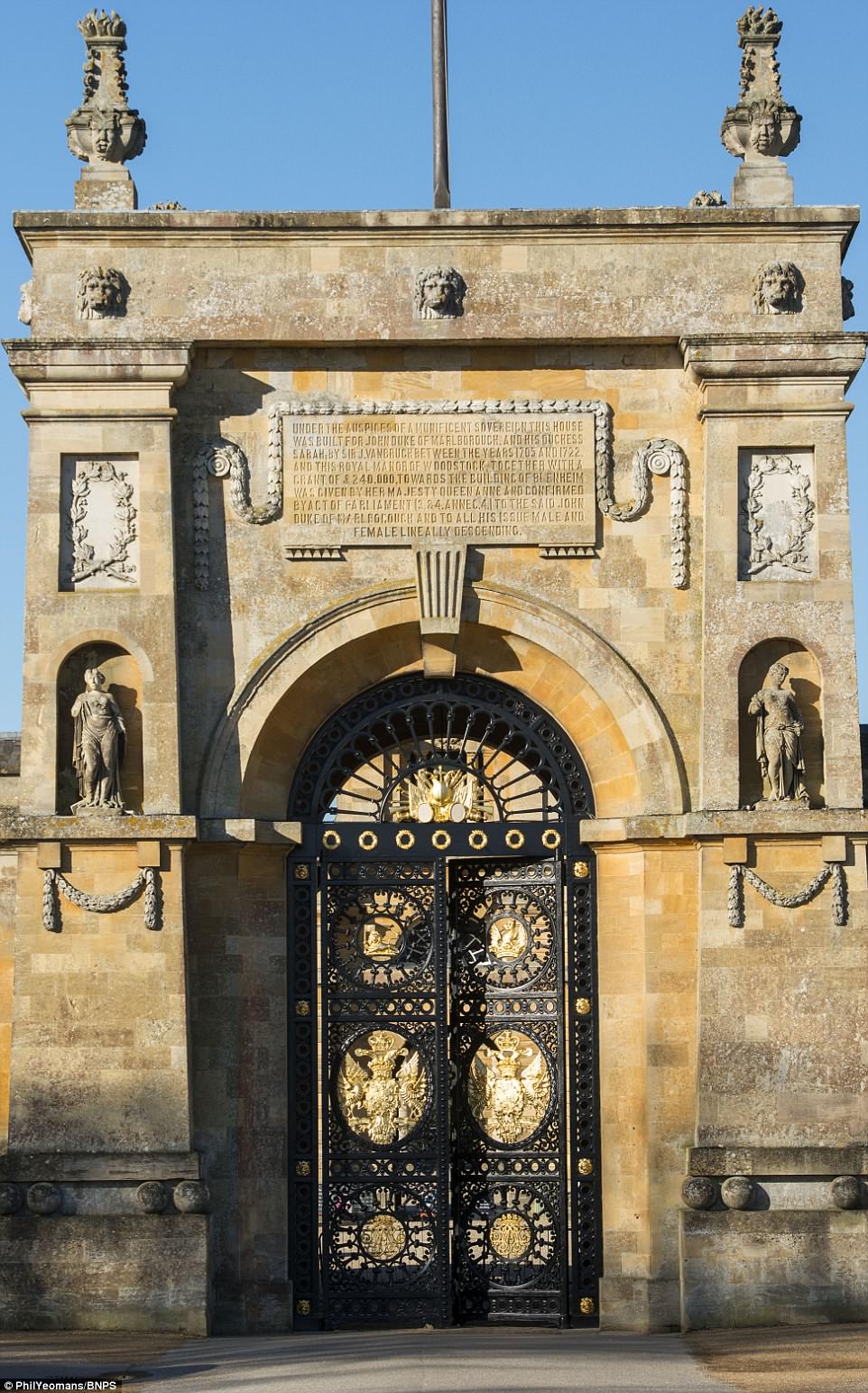 Charles, 9th Duke of Marlborough saved both the palace and his bloodline after he inherited the near-bankrupt dukedom in 1892. He was forced to find a quick and drastic solution to the problems plaguing the family. His solution to the crippling financial rules of the era was to marry money. In November 1896 he was  married to the American railroad heiress Consuelo Vanderbilt whose mother ordered her to marry the English nobleman despite neither being in love with each other. 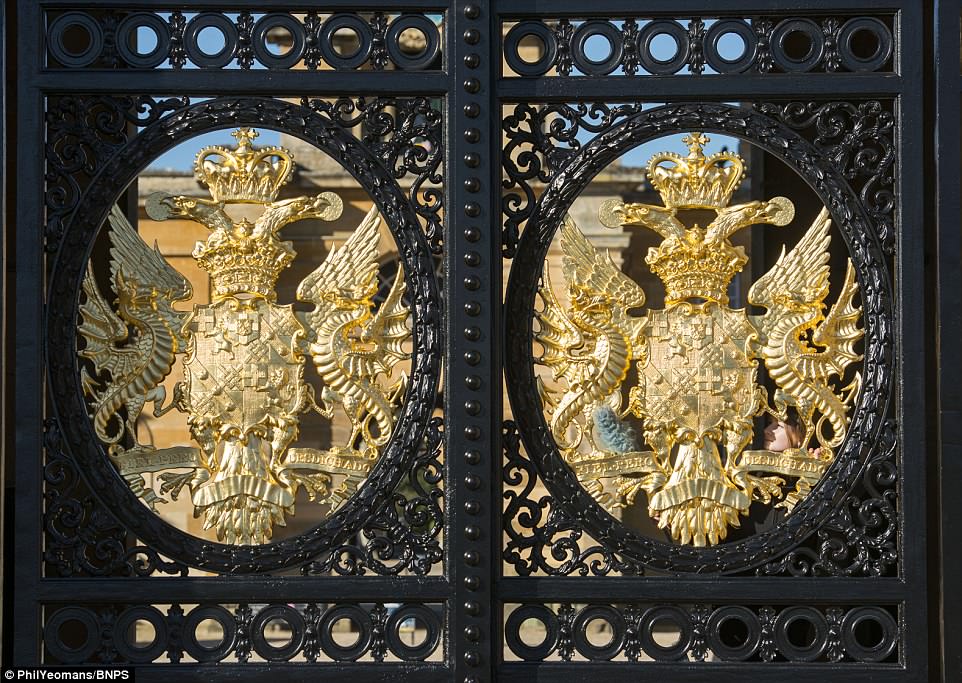 The palace, park, and gardens are open to the public on payment of an entry fee and it also plays host to a mini railway

‘Gilding is a long and steady process which can’t be hurried.

‘It’s also a privilege to get the opportunity to help restore such historic gates for future generations to admire and enjoy.’

The 6th Duke of Marlborough paid £1,000 for the gates which were made by Bramah, Prestage and Ball of Piccadilly and displayed at the Great Exhibition of 1851.

The renovation of the gates – the largest monumental entrance to a private palace in Britain – is part of an ongoing £40m, 10-year restoration programme taking place at the Blenheim Palace estate in Woodstock, Oxon. 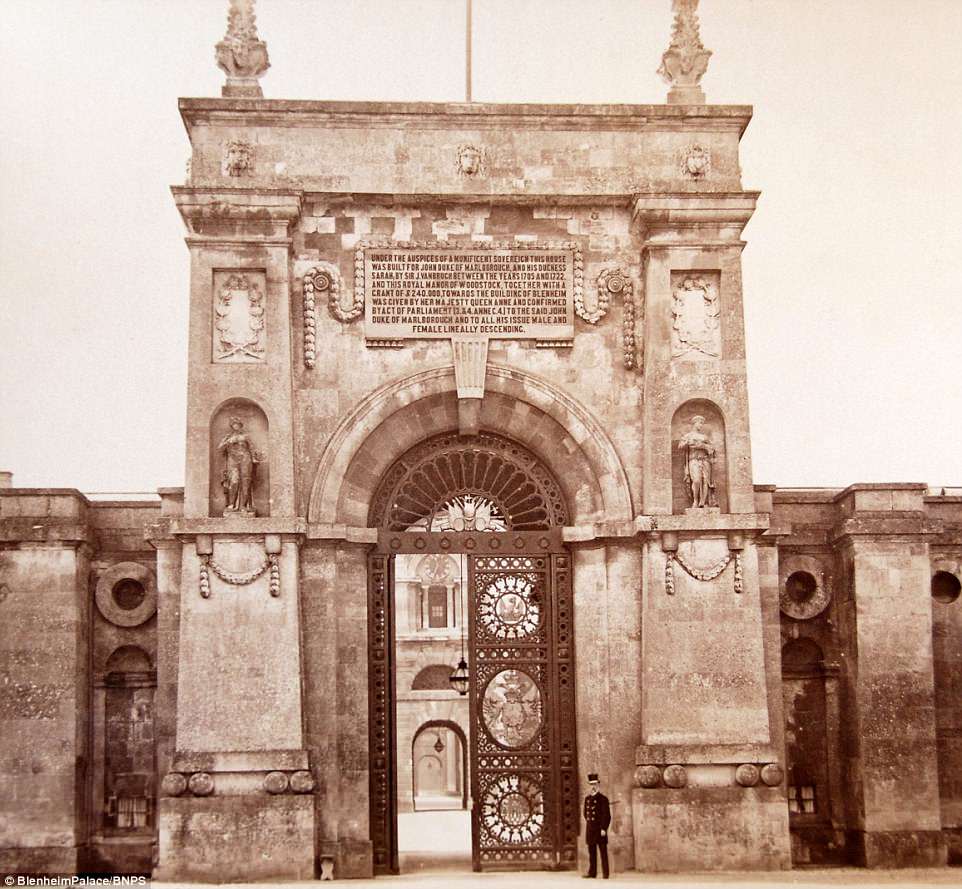 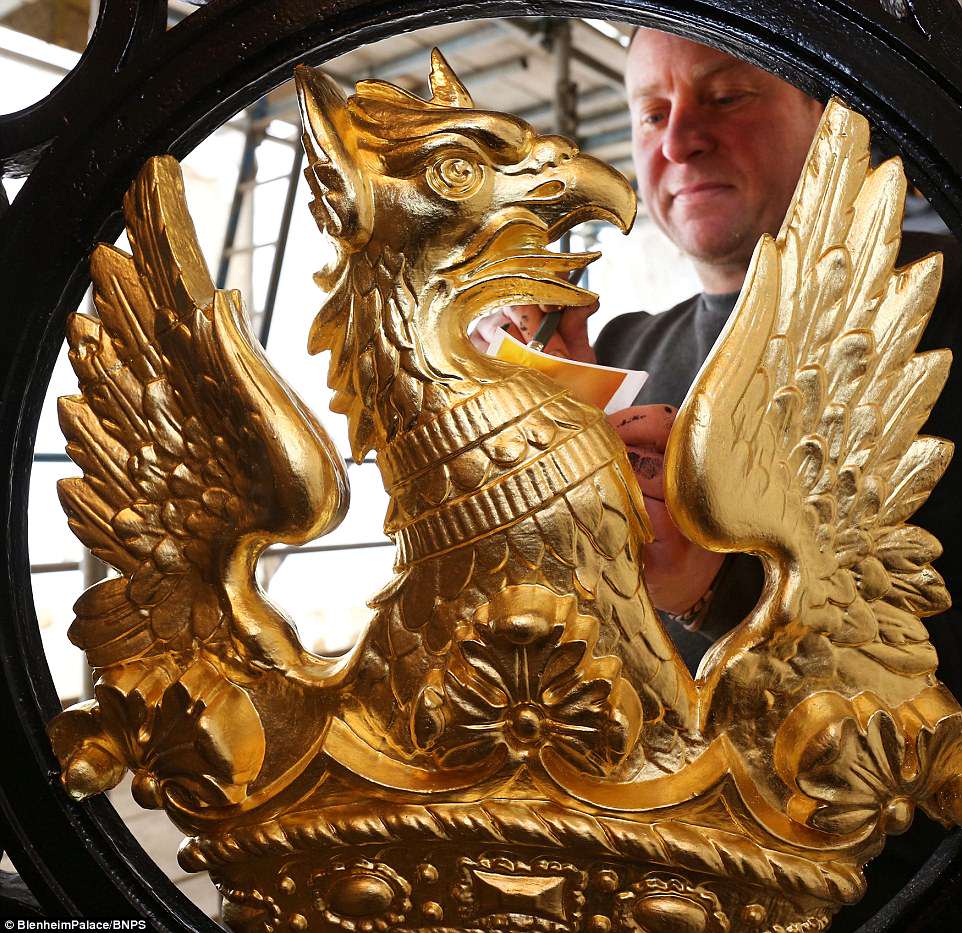 ‘Sitting for hours and hours in one spot does take it out of you, but it’s worth it when the sheeting is removed and the sunlight hits the new gold for the first time and makes it gleam.

In addition to being a visitor attraction, Blenheim is also a venue for weddings and private or corporate events.

The estate is rich in forestry and farming practices, a producer and supplier of Natural Mineral Water, it has a building and contracting business, and a charitable foundation.

The £35,000 restoration of the gates was undertaken by gilder John Naysmith, of the Oxford Iron Company, who used high-pressure water jets to blast the old paint off the 17 tonne gates.

‘The crests and coats of arms are particularly intricate and took a total of eight days to complete on their own. 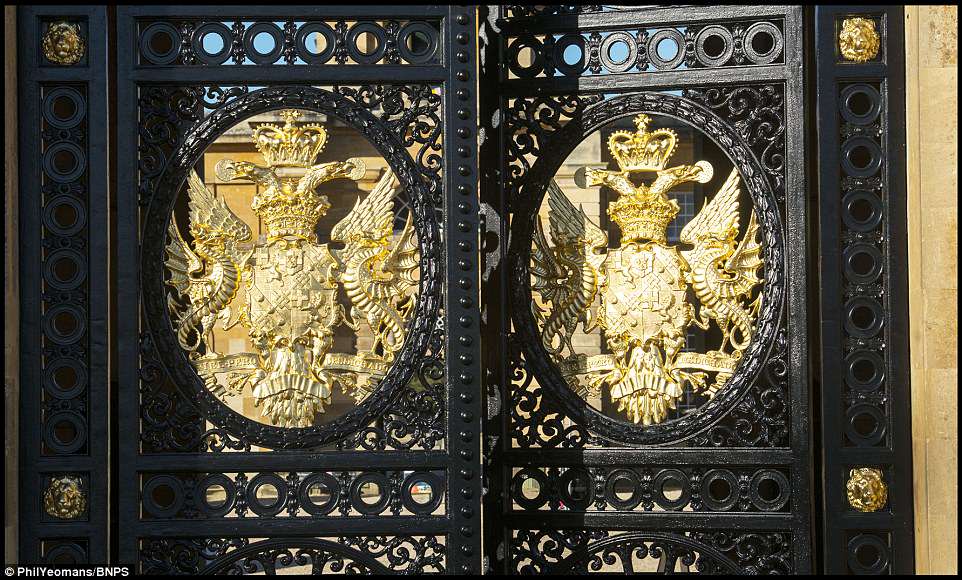 The palace has been a location for many films including Kenneth Branagh’s 1996 adaptation of William Shakespeare’s Hamlet, the James Bond film Spectre and many television shows 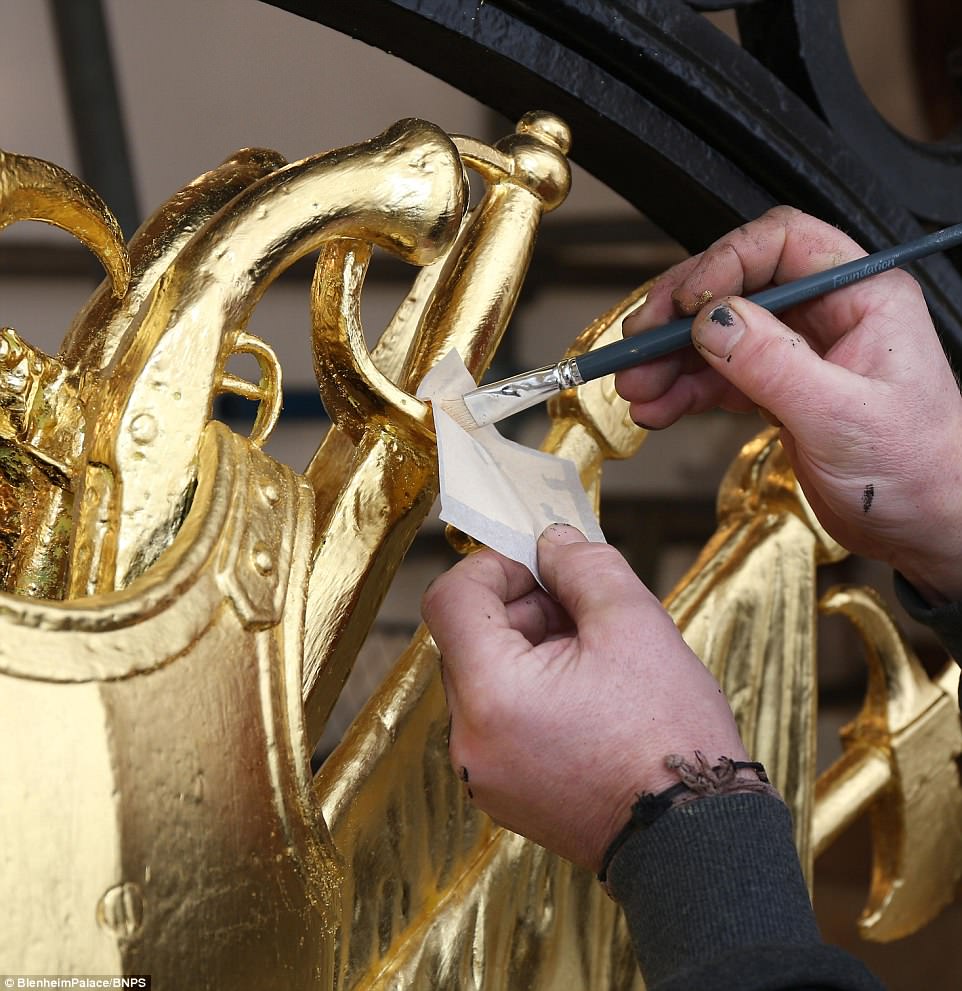 The 17 tonne, 20ft tall gates were restored by hand over the summer after being originally installed in 1852