Gatwick Airport today told beleaguered passengers looking to get away for Christmas that the runway is open with a full schedule running.

There are some 769 flights operating today, with a total of 131, 228 passengers passing through Gatwick.

More than 140,000 people suffered as a drone brought the airport to a standstill last week, forcing the cancellation and delay of over 1,000 flights.

Passengers at Gatwick airport waiting for their flights on Friday 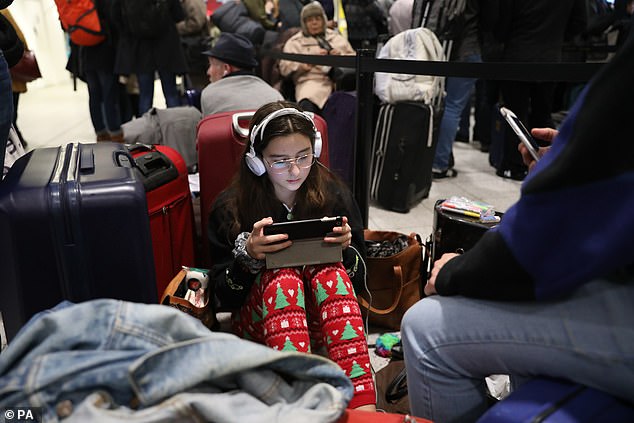 More than 140,000 people suffered as a drone brought the airport to a standstill last week, forcing the cancellation and delay of over 1,000 flights. Pictured, passengers still waiting on Friday

Paul Gait, a double-glazing fitter, and his wife Elaine, from Crawley in West Sussex, were questioned by police over the drone but released this morning without charge.

A spokesman told MailOnline services are ‘stable and normal’ today.

Only one flight this evening has been cancelled – a domestic flight to Stansted Airport which should not affect passengers.

Today there will be some 73,726 holidaymakers departing on outbound flights and 57,502 passengers coming through arrivals.

However passengers are being warned they should expect some delays as the airport continues to ‘recover our operations’ following three days of disruption.

Holidaymakers are advised to check with their airline before travelling to the airport.

A family of seven had their ‘once in a lifetime’ Christmas trip to Lapland ruined by the Gatwick drone chaos. 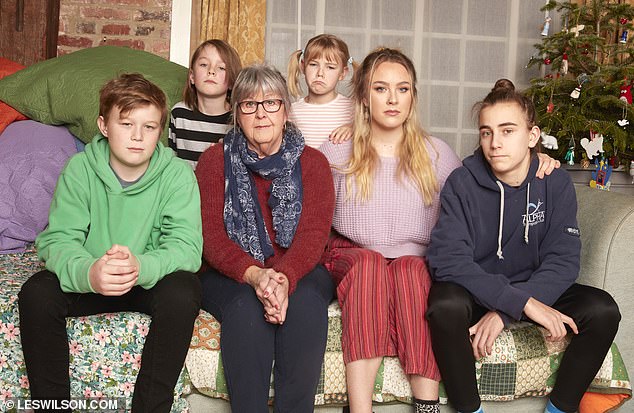 Grandmother Jan Johnson, 70, paid more than £4,000 to take her daughter and five grandchildren to visit Santa.

She and her late husband John, who died of cancer in 2010, aged 60, had long planned such a trip.

They were thrilled by the prospect of petting reindeer, riding with huskies, and meeting Father Christmas, but their hopes were dashed when their flight to Finland was cancelled on Friday.

Mrs Johnson said: ‘When the children were little, John and I said we’d take them on a holiday they won’t forget. It took quite a lot for me to go and sort it out, and then it all went terribly wrong.

‘The children were so desperately upset about it, especially the smaller ones.’

Eldest sibling Tivka said: ‘This was a once-in-a-lifetime opportunity for us. We are a big family, with a single mum struggling to bring up five children, and then we learned we couldn’t go.’

The teenager, from Petersfield in Hampshire, added: ‘I want the culprits to know that they have had a really detrimental effect on my family and our Christmas.’

Her mother, Kristi Johnson, 43, a former midwife, recalled: ‘One of the children said, ‘I knew something this good could never happen to us.’ ‘ 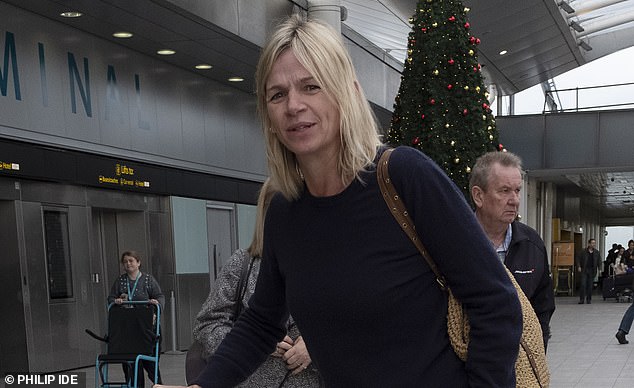 Sympathy: Zoe Ball escaped delays as she flew into Gatwick

The family have travel insurance and hope to rebook next Christmas. Their story emerged as thousands of passengers faced continued uncertainty at Gatwick. The rogue drone activity led to about 1,000 flights being cancelled, delaying 140,000 passengers. Long queues continued to snake around the check-in desks yesterday. In total, 757 flights carrying 124,484 were scheduled in and out of the airport.

Among those affected was Sebastian Jones, 20, from Miami, who missed a connecting flight to Madrid due to the delays. He spent Friday night on the airport floor. Yacht deckhand Nate Nekrep, 32, from Slovenia, missed a connection to Majorca when his flight from Antigua was delayed.

But newly appointed Radio 2 breakfast show DJ Zoe Ball escaped the chaos. After returning to Gatwick from a Caribbean break, she said: ‘I feel so sorry for everyone affected and hope it doesn’t spoil their Christmas.’

However, more long queues are likely today when 785 flights are scheduled to carry about 130,000 passengers.

A Gatwick spokesman said: ‘We are grateful for passengers’ continued patience as we work to get them to their final destination in time for Christmas.’