Passengers were stranded on planes at London Gatwick this morning for over an hour after an aircraft developed a steering issue as it came in to land.

Runways were closed to arrivals and departures after the Virgin Atlantic flight from Antigua in the Caribbean developed a problem in mid air.

The aircraft landed safely, but scores of travellers took to Twitter to complain about being stranded for over an hour as they waited to take off.

They told how they were not informed of the emergency, which happened around 5.30am, and were stuck on planes.

London Gatwick, (file picture) has suspended arrivals and departures after reports of a fault with a Virgin Atlantic jet 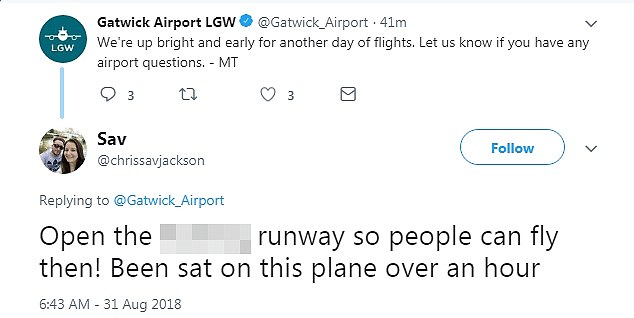 One wrote: ‘Urgh. Sitting on plane at supposedly heading to Milan for work. All flights grounded apparently because of a ‘mayday’ incident on another flight.

Another wrote: @Gatwick_Airport is a f*****g joke, closing the runway for over an hour for no apparent reason… move the virgin plane out of the way and stop ruining everyone’s holiday.’

At just after 7am the airport’s runway fully reopened, and arrivals and departures returned to normal.

Gatwick said in a tweet: ‘Our main runway was unavailable for a short period this morning while a safety inspection took place.