In nine Grand Slam singles matches, and at the tender age of 15, Coco Gauff can claim the unusual distinction of never having been off one of the show courts at a Grand Slam.

Even arriving at Wimbledon as a qualifier last summer, she went straight on to Court One, and by virtue of beating Venus Williams on that occasion stayed there or on Centre thereafter as a singles player.

This sequence, while arguably not entirely healthy, will not change when she faces defending champion Naomi Osaka in the third round of the Australian Open.

On Wednesday she was on the secondary Melbourne Arena when she displayed the fighting spirit that is becoming her signature in recovering to beat Romania’s Sorana Cirstea 7-5 in a deciding set.

Gauff will be front and centre against Osaka, who thumped her in a much hyped match at the US Open that was more memorable for what happened afterwards. Seeing that the youngster was upset after taking only three games, the Japanese went over to comfort her.

Osaka then invited Gauff to share the post-match interview, thus providing some of the most memorable images of the season. Gauff remembers the gesture fondly. ‘It was definitely a good moment for both of us, especially me,’ she said. 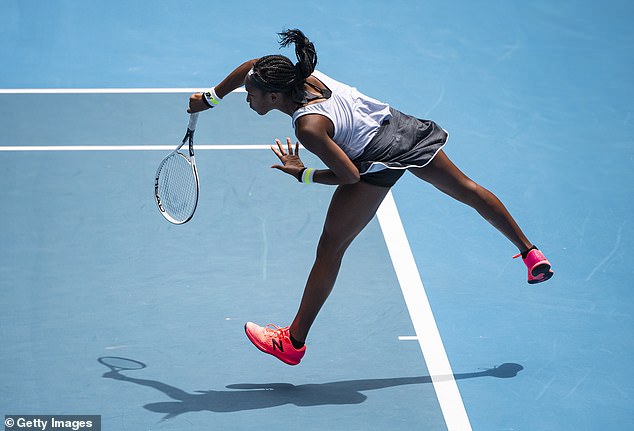 ‘But I think more just for the people watching, the little girls watching and little boys who can see what sportsmanship really is.’

There were mixed fortunes for British competitors, with one getting to play the reigning Wimbledon champion on Rod Laver Arena on Thursday, an experience that another was denied.

Harriet Dart is in the unfamiliar position of filling the primetime slot in the early evening by tackling Simona Halep, but a defeat for Dan Evans meant that hopes of him doing a similar thing against Novak Djokovic were left swirling in the wind.

Evans became the last GB man to exit the singles when he went down to Yoshihito Nishioka in blustery conditions, leaving it to Dart to try to banish the demons of what happened to her at the same venue a year ago when she suffered a 6-0, 6-0 drubbing by Maria Sharapova. 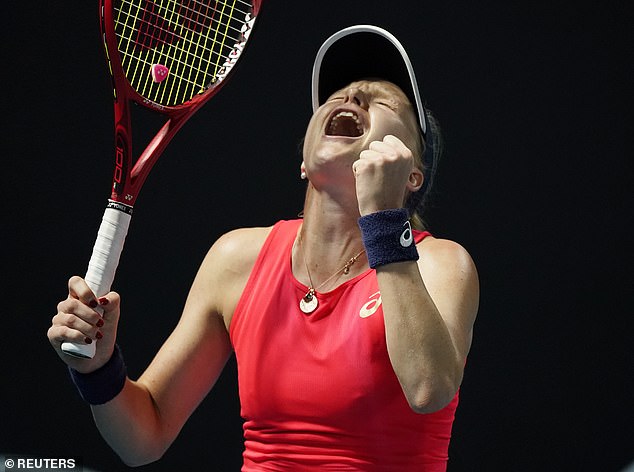 She will need to apply the same kind of ruthlessness that saw her take the relatively unusual step of working with a female coach, Serbian Biljana Veselinovic, for this tournament. Dart arrived in Australia with a different coach in tow, former British player David Brewer, but dispatched him home when she quickly felt it was not working out.

Now with Veselinovic — whose former clients include one-time world No 5 Lucie Safarova — in her corner, she will play Halep confident there will be no repeat of 2019. ‘Physically I am in a much better place,’ she said. ‘Thanks to my trainer for helping me. He beats me in the gym all off-season. I am recovering better and able to deal with the weight of shots, the back-to-back matches. I am happy with that.’

Evans went down 6-4, 6-3, 6-4 to the metronomic Japanese baseliner Nishioka, whose speed and agility mean he gets a demoralising number of balls back. Heather Watson was due to play Belgian No 1 Elise Mertens this morning in the second round after a delayed 4-6, 6-3, 6-1 win over Kristyna Pliskova in yesterday’s fierce gusts.