He said around 2,800 robotic accounts have been churning out messages to foster doubt over official accounts that the Kremlin is to blame for the poison attack.

The Defence Secretary said these trolls are trying to exploit the debate allowed in free and democratic societies to sew division and discord in Britain.

And he said the tactic was straight out of the Nazi playbook when Hitler enlisted Lord Haw Haw – the nickname of William Joyce – to read out propaganda during the war. 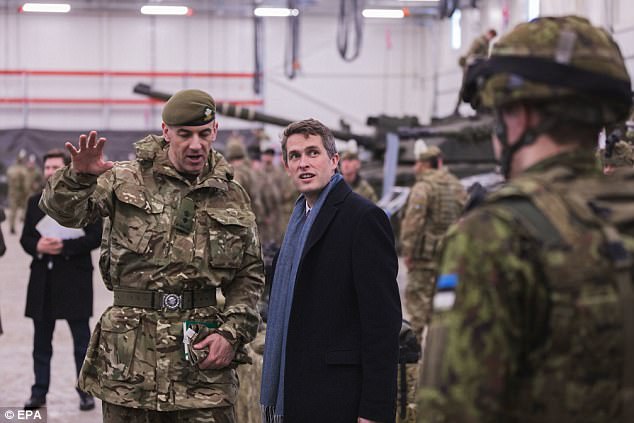 Defence Secretary said around 2,800 robotic accounts have been churning out messages to foster doubt over official accounts that the Kremlin is to blame for the poison attack.

Joyce would take to the radio airwaves to broadcast propaganda in his affected upper class English accent, beginning each with the words ‘Germany calling, Germany calling’.

His broadcasts from Berlin were prized by Hitler’s notorious propaganda chief Goebbels.

Speaking on a visit to Nato troops in Estonia, Mr Williamson said  the disinformation war was being backed by the Kremlin through channels like Sputnik and RT.

‘What actually happens is it completely distorts the narrative of what people think about things’, he told The Times.

‘We have to make sure that that narrative is countered … It is effectively the Lord Haw-Haws of the modern era.

He said Britain’s investigation of the disinformation campaign being waged in the wake of the nerve agent attack had exposed ‘shocking’ levels of Russian meddling.

Russian former spy Sergei Skripal and his daughter Yulia are both fighting for their lives in hospital after being poisoned by Novichok.

The US has announced the expulsion of 60 Russians, including including 12 intelligence officers from Russia’s mission to UN headquarters in New York.

Mr Williamson said that Vladimir Putin may seek to attack the UK and its allies again if given the chance.

He said the West’s patience is wearing  ‘very, very, very thin’ and stressed the need for Nato to stand united to see off the threat posed by the Kremlin.

The Government may try to work with social media giants like Twitter and Facebook to tackle the state-backed disinformation in the same way they are being pressed to take down terror content, he said.

He told the newspaper: ‘You maybe do need to look at … if you have to deal with this in a slightly different way and that is maybe working with some of those providers.’

The  warning comes just days after  news broke that Britain’s anti-doping agency was the target of a cyber attack. 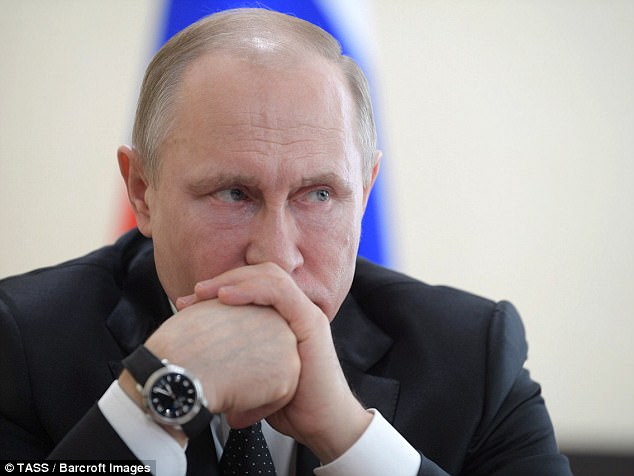 The Kremlin-linked hacking group Fancy Bears has been linked to the attempted hack.

Speaking in the House of Commons yesterday, Theresa May said  the united response showed Mr Putin’s attempt to use the Salisbury attack to split the West had ‘spectacularly backfired’.

She told MPs: ‘This is the largest collective expulsion of Russian intelligence officers in history.

‘If the Kremlin’s goal is to intimidate and divide the Western alliance then their efforts have spectacularly backfired.

‘Today’s actions by our allies clearly demonstrate that we all stand shoulder to shoulder in sending the strongest signal to the Kremlin that Russia cannot continue to flout international law and threaten our security.’