Defence Secretary Gavin Williamson is ‘out of his mind’ for proposing a series of ‘bizarre’ and outlandish ideas to bolster the UK’s military, sources have claimed.

Among some of the concepts touted by Mr Williamson include fitting guns to tractors and disguising defence systems as Coca-Cola lorries, the Sun says.

Williamson is rumoured to have suggested that old commercial ferries should also be turned into beach assault crafts, just part of a string of unusual requests which have riled military chiefs.

His alleged proposals come in the midst of huge cuts, including a £20billion shortfall in its £179billion equipment budget.

A source said: ‘The man is out of his mind. No one knows what to do.’

‘We need billions and serious ideas to tackle serious problems.

‘Yet Williamson is mucking about with his spider and coming up with crazy suggestions. The man is out of his mind.

‘His behaviour is totally bizarre and no one knows what to do.’

The proposals have sparked anger within the ranks of the military, as they now fear his strange demands could hamper their chances of securing additional funds from Philip Hammond’s Treasury.

The Defence Secretary reportedly proposed the idea of Coca-Cola missile trucks during a meeting on the threat from Russia.

A source told the Sun: ‘Gavin just came out with it. He said, “Can’t we buy tractors and put really expensive guns on them?”‘

In June, Williamson threatened to topple Theresa May after a bitter row over military cuts. 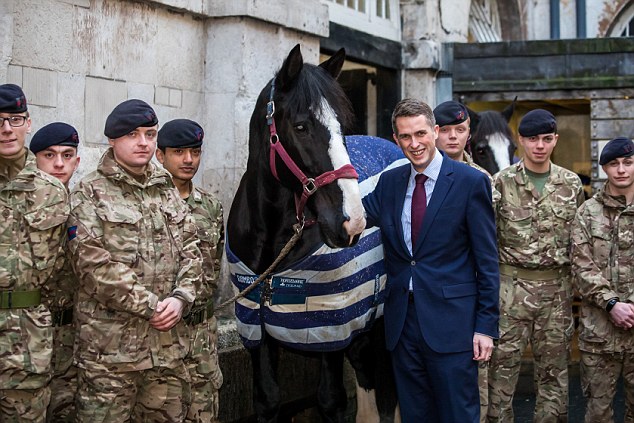 But after he suggested old commercial ferries should be turned into beach assault craft, one source lamented their expectations had been ‘misplaced’

He is said to have warned the Prime Minister that if she did not commit an extra £20billion to Defence then Tory MPs would vote down her next Budget, effectively passing a motion of no confidence in her.

‘I made her – and I can break her,’ Mr Williamson is said to have boasted to service chiefs.

When Mr Williamson said he needed his own £20 billion – a minimum of £2 billion a year extra for the next decade – to avoid damaging defence cuts, Mrs May questioned whether the UK had to be a ‘tier one’ military power.

Mr Williamson hit back that after Brexit it would be even more important for the UK to ‘sit at the top table’ internationally.