A man who recently admitted murdering an American mathematician found at the bottom of a Sydney cliff 34 years ago in a gay hate crime has come out as gay himself, a court has heard.

Scott Phillip White, 51, was jailed for a maximum of 12 years and seven months on Tuesday over the murder of Scott Johnson, 27, whose naked body was found at the bottom of a cliff on Sydney’s northern beaches in December 1988.

White will be eligible for parole in eight years in August 2030.

For more than three decades, Mr Johnson’s death was dismissed by police as suicide before White was charged with murder in 2020 after a lengthy campaign by his loved ones and the media.

White had previously indicated he would plead not guilty before changing his plea at a pre-trial hearing in January. He showed no emotion in the court dock as Justice Helen Wilson handed down his sentence on Tuesday.

Justice Wilson found that he had punched Mr Johnson at North Head in a hostile act, causing the doctor to fall to his death. 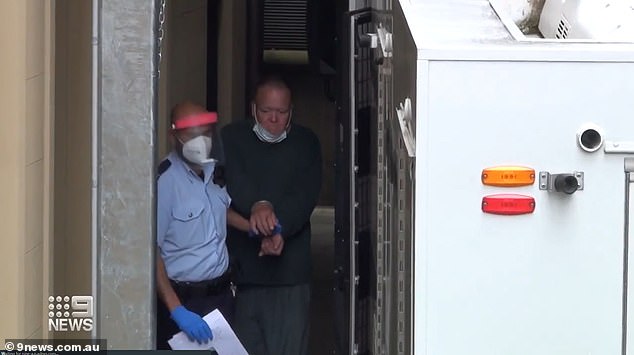 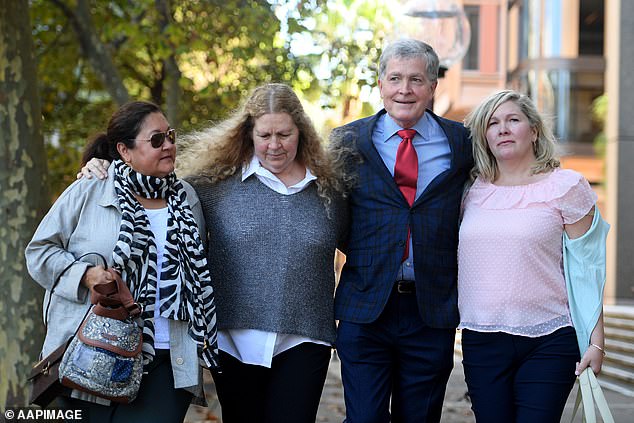 ‘[White] did a violent act and that act is the direct cause of Dr Johnson leaving the clifftop in terror,’ the judge said.

The fatal assault was done with reckless indifference to human life, with White throwing the punch near the unguarded edge of a high coastal cliff and then fleeing the scene without notifying the police after Dr Johnson disappeared over the edge.

Justice Wilson found there was not enough evidence ‘beyond reasonable doubt’ to show the murder was a gay hate crime, however, because White had met Dr Johnson at the Brighton Hotel and the pair had willingly gone to the gay beat together.

Justice Wilson acknowledged the outcome would ‘unlikely to end the grief … it may bring some peace’ for Dr Johnson’s grieving family, who have spent the last 34 years fighting for justice.

‘It was a terrible death … Mr Johnson must have been terrified, aware he would strike the rocks below and conscious of his fate,’ she said.

Justice Wilson found the attack was not planned and could have been driven by ‘self-loathing’.

White was raised in a homophobic family before he came out as gay years later, the sentencing process revealed this week.

White, was facing life behind bars but received a reduced sentence based on his recent guilty plea, cognitive impairment and a dysfunctional upbringing.

Originally from Los Angeles, Dr Johnson had been a doctoral student at the Australian National University in Canberra when he met White at a Manly hotel before the pair went to North Head. 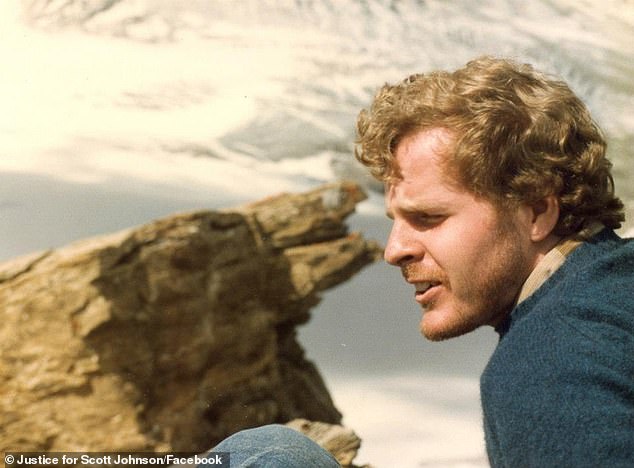 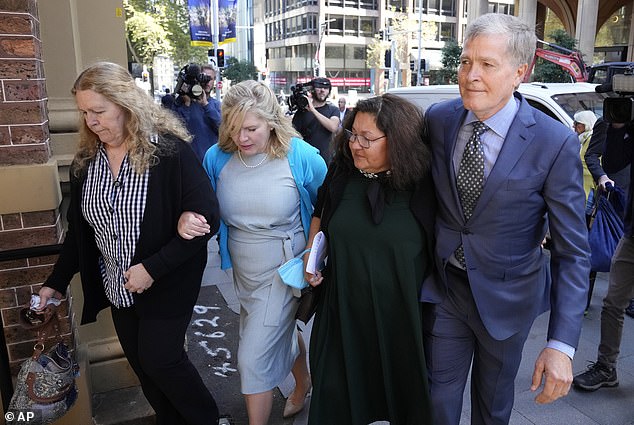 Scott Johnson’s brother Steve, (right) arrived at the NSW Supreme Court on Monday with his sisters, Terry, left, and Rebecca and his wife Rosemarie (second right), where the family gave harrowing statements

At a hearing on Monday, White barrister’s Belinda Rigg SC argued her client should receive a lesser sentence because he had only turned 18 at the time, saying that sentences for murder were significantly lower in the late 1980s and early 1990s.

White’s intellectual impairments meant he had suffered stress, anxiety and panic attacks while in custody.

During the 1980s, White was a gay man who had lived with his homophobic brother and alcoholic parents, Ms Rigg said.

She also told the court White now identified as gay and had told police he went, at Mr Johnson’s suggestion, to North Head on the night of his death.

It comes as Mr Johnson’s shattered family spoke of the horror, terror, tragedy and heartbreak that the past 34 years have brought.

‘The hateful person who killed Scott has been walking free on this earth for the past 33 years. Thirty-three years that he took away from my baby brother. I believe [White] deserves life in prison.’

Another sister Rebecca Johnson talked about how society in the 1980s had also let down teenagers who thought violence against gay men was acceptable as White watched on from dock,

‘Parents, brothers and sisters, teachers and classmates, authority, culture, somehow Mr White’s world reinforced that violence and even killing was OK and maybe that gay men weren’t human. That is a profound tragedy,’ she said on Monday. 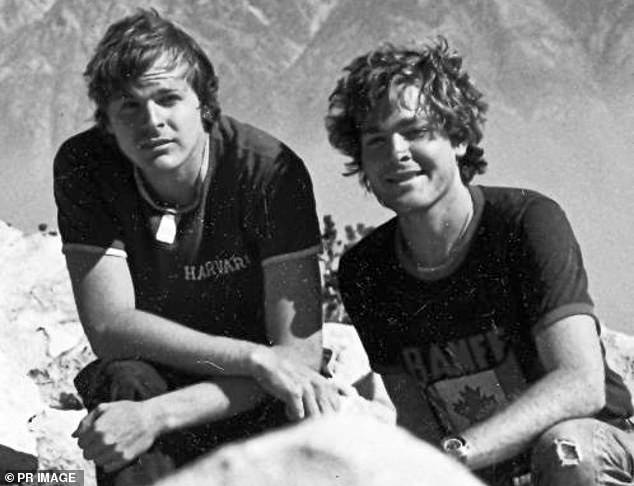 ‘The wailing is a reliving, it’s a howl of death and despair and loss and grief that signifies that a piece of us has departed. It never goes away,’ Steve Johnson (pictured right with Scott) told the court about his brother’s death 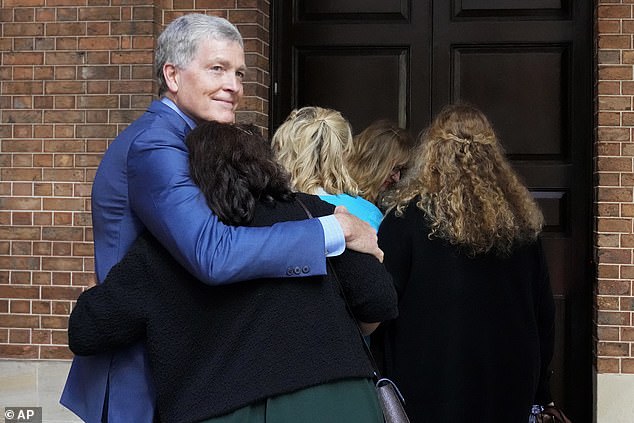 Scott Johnson’s family have spent the last 34 years fighting for justice. Pictured is his brother Steve hugging his wife outside the NSW Supreme Court on Monday

Ms Johnson questioned why her brother was placed in the crosshairs of deadly violence and murder simply for who he chose to love.

Brother Steve Johnson described the death as too awful to be true, saying his mother had reacted with a wailing cry at the news.

‘The wailing is a reliving, it’s a howl of death and despair and loss and grief that signifies that a piece of us has departed. It never goes away.’

Dr Johnson’s partner Michael Noone also gave a statement describing the sheer horror of receiving a call from the police about the death of a loved one.

The victim statements were heard after White’s former partner Helen White took the stand and described a conversation with him in December 1998 about his ‘poofter bashing’ of the 1980s.

‘He said the only good poofter is a dead poofter, to which I said, ‘So you threw him off the cliff’. And he said, ‘It’s not my fault the dumb c*** ran off the cliff’,’ she said.

Ms White denied suggestions by White’s barrister that she had only gone to police because of a $1 million reward offered in 2018 for information about Mr Johnson’s death, and rejected claims she had made up the conversations with her then husband.

The prosecution pointed to the seriousness of the offence, saying it was targeted towards the victim’s sexuality.

‘This was a grave and serious murder which entailed a high degree of criminality,’ crown prosecutor Brett Hatfield said. 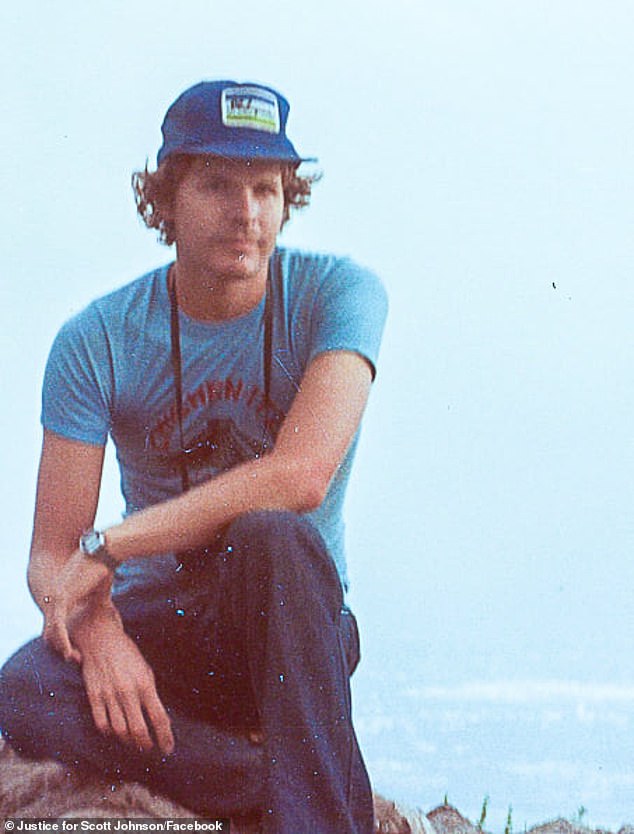 Scott Johnson, a Los Angeles native, was a doctoral student at the Australian National University in Canberra before being killed

Speaking after Monday’s hearing, Steve Johnson said that while giving their statements in court was emotional for the family, it was a chance to look White right in the eyes.

‘I got to tell [White] what my brother was like. I got to tell him how it felt to hear that he was dead … I have to think it sunk in. He watched and listened.’

White’s defence team unsuccessfully tried to reverse the guilty plea the day it was made.

An appeal of White’s conviction was filed last month and could be heard Court of Criminal Appeal ‘towards the end of this year’, Justice Wilson said.

While the initial police inquest in 1989 found Mr Johnson’s death was a suicide, the case was reopened in 2012.

Another inquest returned an open finding in June 2012, but a third in 2017 found Mr Johnson fell from the clifftops as a result of violence by an unidentified attacker who perceived him to be gay. 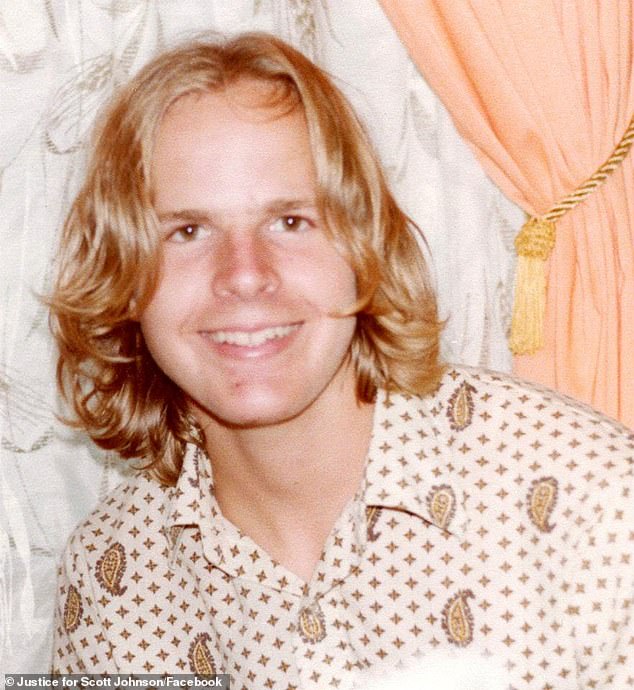 White had met Johnson in a nearby bar in a Sydney suburb and Johnson had stripped naked at the clifftop before he died, according to prosecutors