The nephew of a Missouri congresswoman who sobbed while pleading with her colleagues to vote against gay marriage has condemned his aunt for bigotry, saying: ‘I don’t want my last name to be associated with hate.’

Vicky Hartzler, a Republican, cried in the Capitol on Thursday while speaking in opposition to the gay marriage bill which the House ultimately passed.

The 62-year-old was in tears, her voice quavering, as she told the House: ‘I hope and pray that my colleagues will find the courage to join me in opposing this misguided, and this dangerous bill.’

On Friday, Hartzler’s nephew Andrew Hartzler said she was misguided, and would have to learn tolerance and acceptance.

He came out to her in February, despite her long history of rejecting LGBTQ rights, and her decision in 2019 to sponsor an event arranged by proponents of conversion therapy.

Andrew Hartzler, 23, filmed a TikTok on Friday which went viral with 154,000 views as of Friday evening, noting: ‘So, despite my coming out to my aunt this past February, I guess she’s still as much of a homophobe.’

GOP Rep. Vicky Hartzler broke down and cried on the House floor Thursday in opposition to the gay marriage bill the House passed 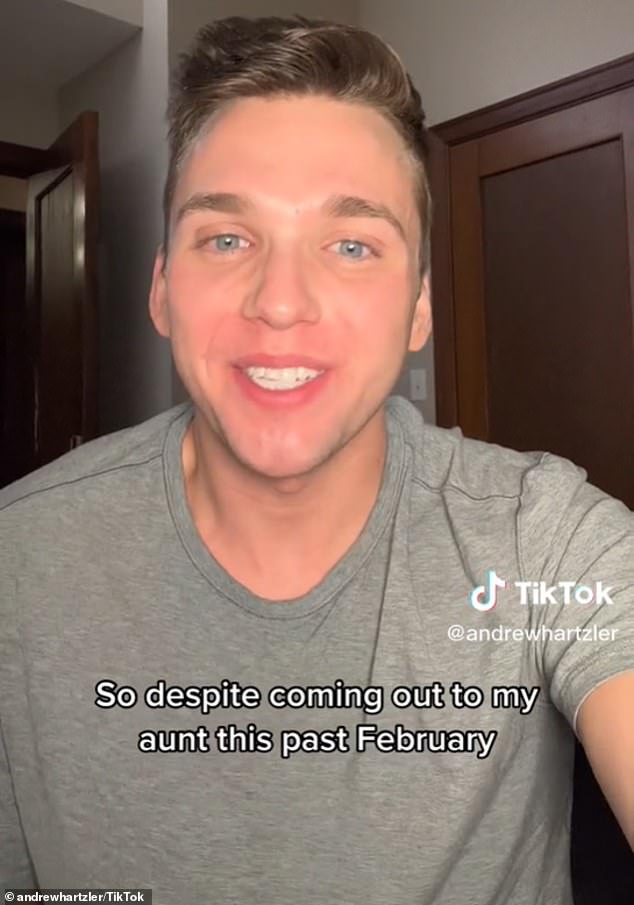 Andrew Hartzler published a TikTok criticizing his aunt on Friday which has gone viral, with 154,000 views

He told BuzzFeed News he wasn’t surprised by her performance on Thursday.

‘At first I just thought that it was an old video because that kind of rhetoric is quite common from my aunt,’ he said.

‘But I realized that it was from today and what she was talking about, and, yeah, I wasn’t really surprised.’

He said he thought it was ‘weird’ that she was crying, but was sure her emotion was real.

‘I don’t think that was a performance. Knowing my aunt, I think those were genuine tears.’

He said he is not close to his aunt, who invited him to Thanksgiving at her house, but whose invitation he declined, not feeling welcome.

He also has a difficult relationship with his deeply conservative parents, but felt that he needed to respond to his aunt’s rhetoric.

‘I do feel compelled to speak out when I see this just to counter these messages,’ he said. 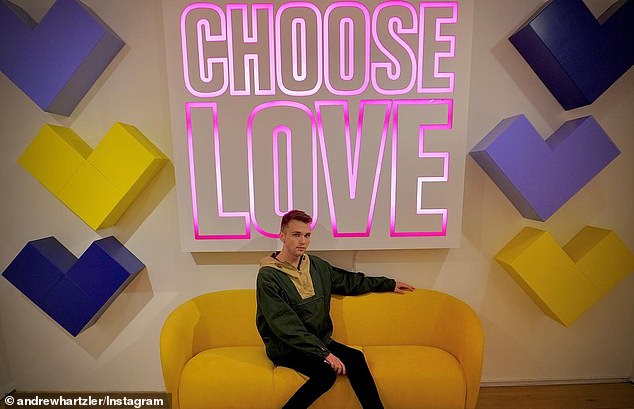 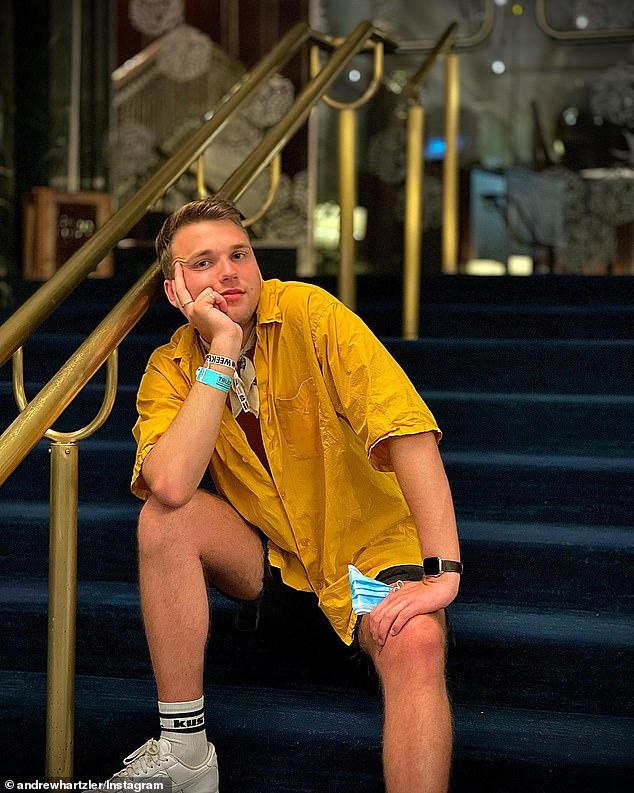 He also has a difficult relationship with his deeply conservative parents, but felt that he needed to respond to his aunt’s rhetoric

Andrew has been in the spotlight before, after he sued the evangelical Oral Roberts University in Tulsa, Oklahoma – a university he did not choose, but the only one his father said he would pay tuition fees.

Like all students, Hartzler had signed a pledge on arrival stating: ‘I will not engage in or attempt to engage in any illicit, unscriptural sexual acts, which include any homosexual activity and sexual intercourse with one who is not my spouse. I will not be united in marriage other than the marriage between one man and one woman.’

The president of the university, William Wilson, preached during one of the mandatory twice-weekly sermons that ‘if a man has sexual relations with a man as one does with a woman, both of them have done what is detestable, they are put to death.’

Wilson asked the assembled students to close their eyes, bow their heads and raise their hand if they if they needed ‘healing in this area of sexuality.’

He is now part of a federal class action lawsuit in which plaintiffs are suing the Department of Education to stop religious schools from receiving federal funds if they discriminate against LGBTQ students. Under current law, such schools receive religious exemptions from complying with Title IX anti-discrimination laws.

In his TikTok from Friday, Andrew Hartzler said his aunt was wrong to argue that religious rights were curtailed by gay marriage. 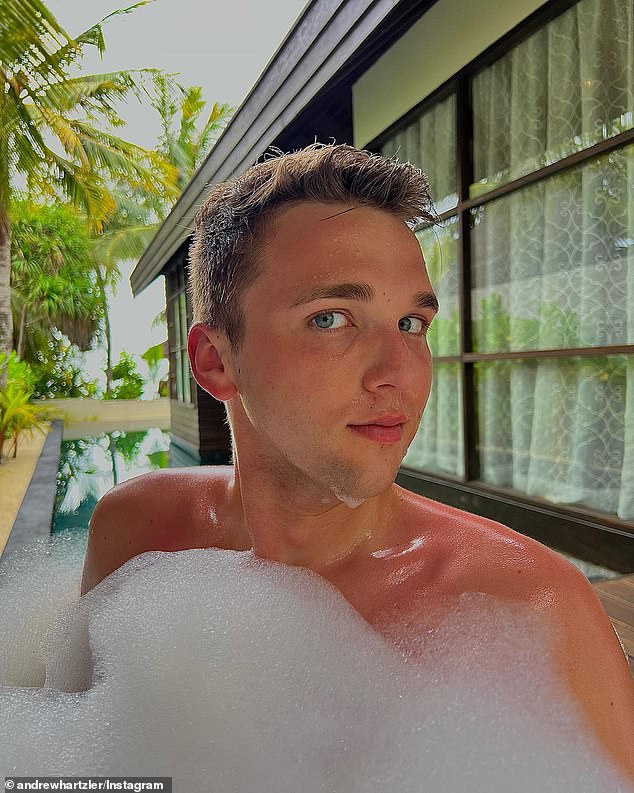 Hartzler is part of a class action suit suing his university over discrimination, arguing they should not receive federal funds 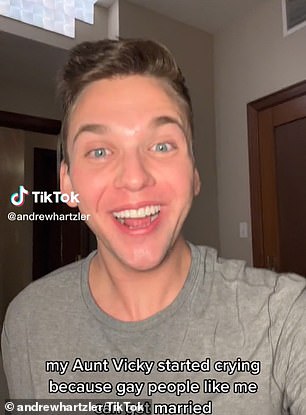 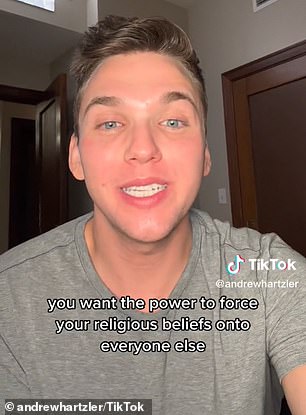 ‘It’s more like you want the power to force your religious beliefs onto everyone else, and because you don’t have that power, you feel like you’re being silenced,’ he said in the TikTok.

‘But you’re not. You’re just gonna have to learn to coexist with all of us. And I’m sure it’s not that hard.’

He said he hopes his words here and in his TikTok make his aunt reckon with the impact of her rhetoric.

‘I really wish that she would see how harmful her words are and that she wouldn’t use her political power to continue instilling religious exemptions into civil rights laws and allowing schools to actively discriminate against LGBTQ people,’ he said.

‘I think that she’s trying to play the victim when really she’s the perpetrator of a lot of harm being done, and I feel like she needs to take responsibility.’

Vicky Hartzler, an evangelical Christian, ran for Missouri’s Senate seat this year but lost a GOP primary to Eric Schmitt.

Former President Trump declined to endorse her race, writing on Truth Social: ‘I don’t think she has what it takes to take on the Radical Left Democrats.’

His aunt on Thursday told the House: ‘This is yet another step toward the Democrats goal of dismantling the traditional family, silencing voices of faith and permanently undoing our country’s God-woven foundation. 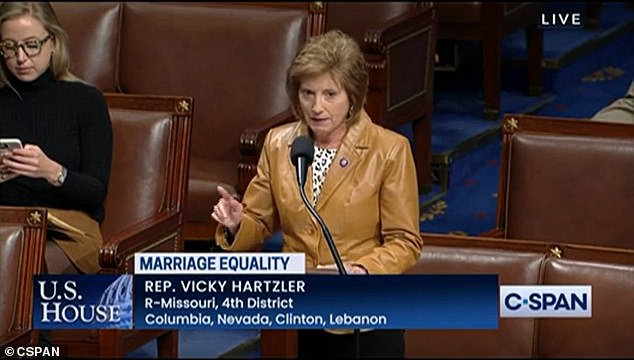 ‘This is yet another step toward the Democrats goal of dismantling the traditional family, silencing voices of faith and permanently undoing our country’s God woven foundation,’ the Missouri Republican said as her voice quivered 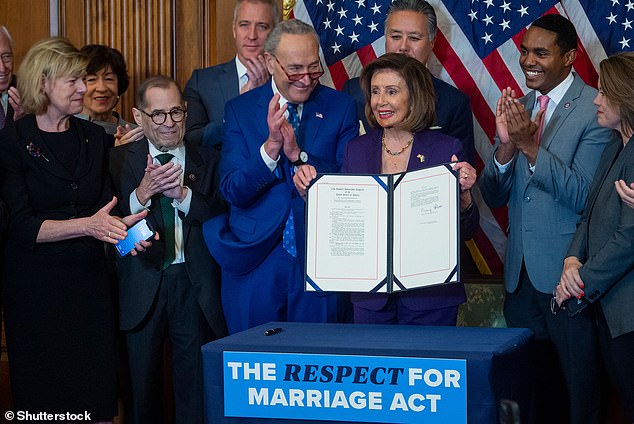 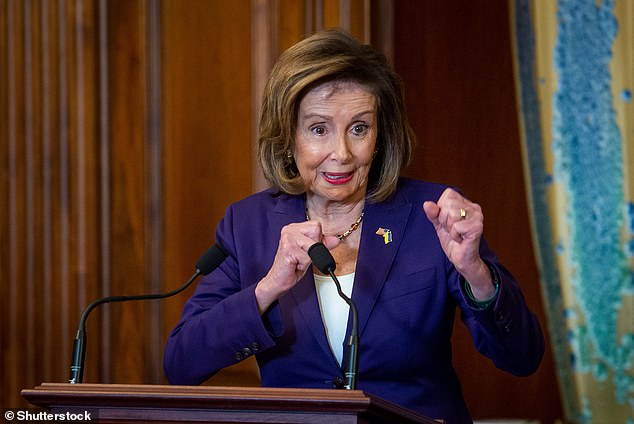 Pelosi choked up earlier in announcing the bill’s passing

‘This is the Democrats’ priority.

‘Well, Mr. Speaker, I’ll tell you my priority – protect religious liberty, protect people of faith and protect Americans who believe in the true meaning of marriage.

‘I hope and pray that my colleagues will find the courage to join me in opposing this misguided, and this dangerous bill.’

Speaker Nancy Pelosi cried for the opposite reason after the bill passed – wiping away tears as she celebrated the bill’s passing – one of the last bills that will pass under her leadership.

She had become choked up earlier, when announcing the bill’s passing.

‘I was emotional, I’m sorry,’ she said after banging the gavel several times on the desk.

Thirty-nine Republicans joined all Democrats in voting ‘yes’ on the bill, sending it to President Biden’s desk on a 258-169 vote.

One other Republican voted ‘present’ and four did not vote.

Last week, 12 Republicans joined all Democrats to vote for the legislation in the Senate, breaking a 60-vote filibuster.

The Respect for Marriage Act requires states to recognize any marriage that happened in another state and formally repeals the ‘Defense of Marriage Act’ that stated marriage was between one man and one woman.

The right to same-sex marriage has been legal in all 50 states since the 2012 ruling Obergefell v. Hodges. The bill, however, does not codify Obergefell, meaning if the Supreme Court overturned that ruling states could outlaw gay marriage but would have to recognize married same-sex partners if the ceremony took place in another state.

The bill came about in light of the Dobbs decision, when Justice Clarence Thomas suggested other substantive due process opinions – like gay marriage or the right to contraception – could be reconsidered.

Last month a bipartisan group of senators added a religious freedom amendment to the bill stipulating that nonprofit religious organizations would not have to provide goods or services for a marriage celebration and their stance on marriage would not affect any federal benefits or tax exemptions.