Gay rights campaigners have called on Prince William to challenge the government of Pakistan over its homophobic laws when he and his wife make an official visit there later this year.

The tour was announced by the Palace yesterday just days after the Prince said he would support his own children if they were gay.

Homosexuality is a criminal offence in Pakistan and punishable by long jail sentences. Raising the contentious issue in official meetings would be a breach of Royal protocol.

Prince William, Duke of Cambridge receives a gift bag from trust chief executive officer Tim Sigsworth as he visits the Albert Kennedy Trust to learn about the issue of LGBTQ youth homelessness

Veteran gay rights campaigner Peter Tatchell described Pakistan as a ‘rogue state’ and told The Mail on Sunday: ‘Prince William’s support for the LGBT+ community does not square with his visit to Pakistan, where same-sex relations are punishable by life imprisonment and there is state indifference to mob violence and so-called honour killing.

‘At the very least, he should speak out in support of the LGBT+ community during his visit,’ he added.

The couple’s visit to Pakistan is the first one by a key member of the Royal Family in over a decade. Last week, Prince William revealed his position about his own children while opening a new centre at the Albert Kennedy Trust in London, a charity for LGBT youth. 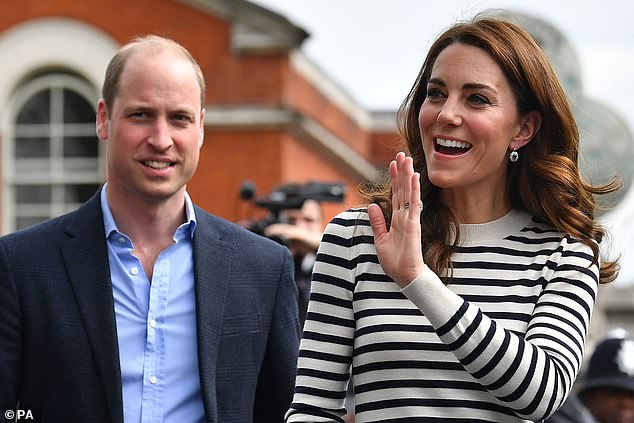 The Duke and Duchess of Cambridge who will carry out a high-profile visit to Pakistan this autumn, Kensington Palace has announced

Last night, Palace sources claimed that the topic of LGBT rights is ‘highly unlikely’ to be on the agenda and that the purpose of the trip is to bolster relations with Pakistan.

A palace source said: ‘The Duke of Cambridge’s views on human rights are well documented. While he is always respectful of tradition and cultural difference, he never shies away from difficult conversations.’