GBBO viewers are VERY unimpressed by the ‘vomit-inducing’ showstopping smörgåstårtes

Viewers of the Great British Bake Off were left unimpressed by this week’s showstopper challenge which asked contestants to make ‘savoury cakes’ which made some people ‘gag’.

On the third week of the series, which was bread week, the bakers were asked to make an extravagant smörgåstårtes – an impressive-looking dish that compiles layers of bread and savoury fillings including fish, vegetables and meat.

The dish, which is a delicacy in Sweden, Estonia, Iceland and Finland, is typically composed using rye bread and often uses mayonnaise as the base for fillings.

On week three of the Great British Bake Off, which was bread week, the showstopper challenge asked contestants to make a smörgåstårte 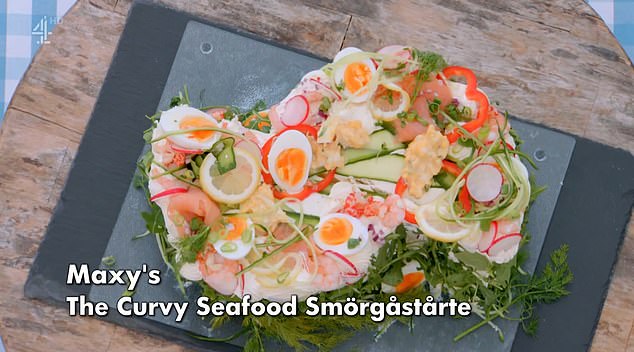 Maxy, who is originally from Sweden, made a seafood smörgåstårte which contained eggs and salmon 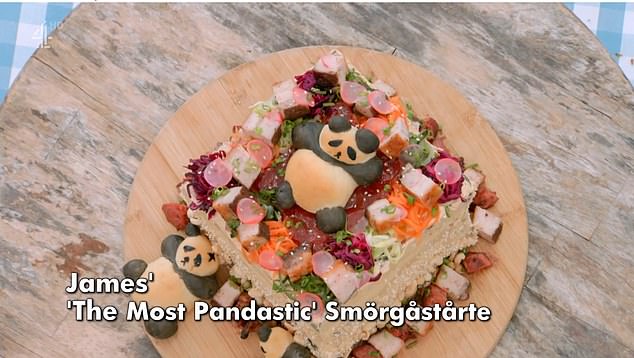 It is served cold and cut into portions like a cake would be, but it is always savoury.

Despite the bakers working on their designs for four and a half hours, many viewers were not happy at all with the challenge and the idea of eating dishes that look like sweet cakes, but which are filled with mayonnaise and meat.

Taking to Twitter to express their disgust, some viewers said the were left feeling unwell after watching the challenge – although a few others appeared to be on board with the idea.

As the bakers in the tent got to work on producing their smörgåstårtes they made their own mayonnaises and bread from scratch as they got creative with their designs and fillings.

One baker, James, decided to give his smörgåstårte an east-Asian twist, usind milk bread instead of rye and decorating his creation with a panda, an animal native to China. 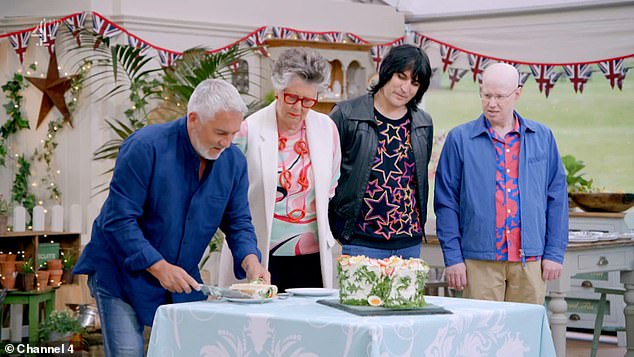 Judges Paul Hollywood and Prue Leith cut into the smörgåstårtes to check they were layered properly, while presenters Noel Fielding and Matt Lucas watched on

Dawn, who went for a much simpler design, gave her showstopper a Greek twist and filled it with chicken souvlaki – although sadly the judges deemed it a little bit too dry.

Watching the challenge, viewers wrote on Twitter that it had made them feel unwell.

One person wrote: ‘These are so strange… They look like cake but they have chicken and cucumber in them.’

Another said: ‘I cannot deal with these Swedish sandwiches. WTAF?’

One viewer, who appeared to be particularly put off by the smörgåstårtes, said the challenge was ‘vomitous’.

Lots of viewers who were displeased with the challenge made the same reference at the idea of making a savoury dish that is served like a dessert.

They referred to an infamous episode of Friends in which Rachel makes a trifle for the group as they celebrate Thanksgiving, but she is known for being a terrible cook and makes a rookie error while compiling the dish.

After two pages of the recipe book get stuck together, Rachel accidentally confuses the trifle for a shepherd’s pie and puts a later of beef, sautéed with peas and onions, into her dessert, leaving her hungry guests disgusted – apart from gluttonous Joey, who eats the whole thing. 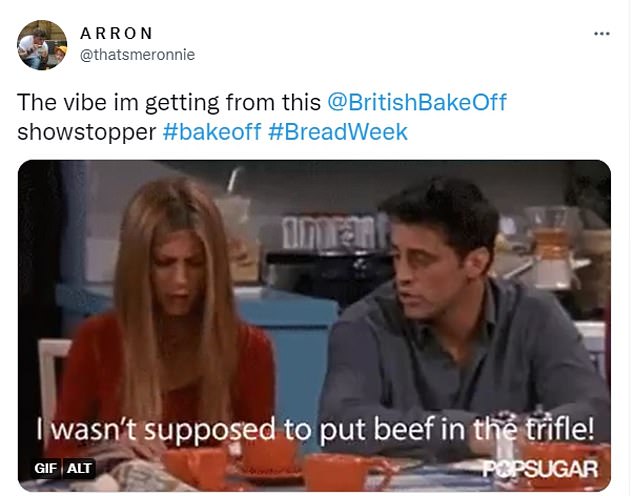 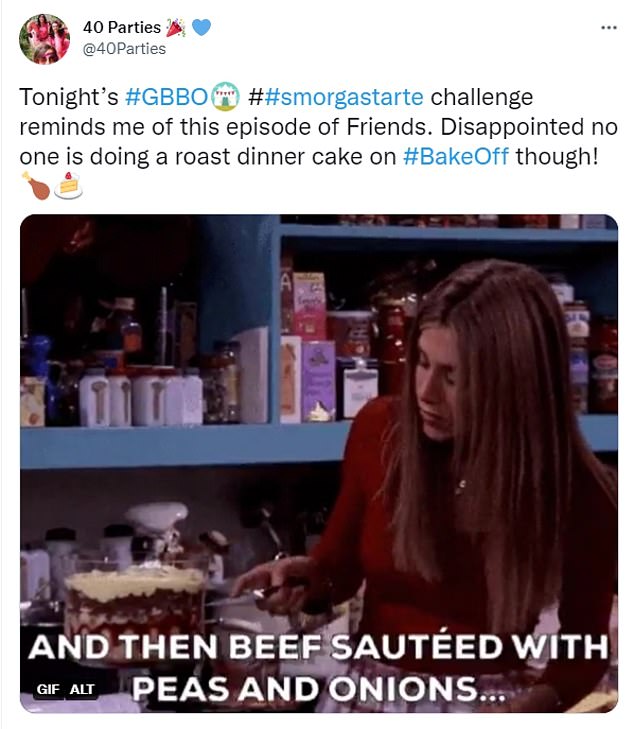 While some viewers pointed out bread week hadn’t been very focused on loaves, others harked back to a classic Friends episode where Rachel makes a rookie error while making her trifle

Referring to the episode, one person wrote: ‘What’s the next challenge? Making Rachel’s trifle from Friends?’

A few other viewers made the point that, despite it being bread week, ‘not a single loaf’ was made, with the other two challenges asking contestants to make pizza and pain au raisin.

However, there were a few viewers who disagreed with the chorus, and by the end of the episode they were sold on the idea of the smörgåstårte.

One person said: ‘I normally don’t understand the showstopper challenge at all on Bake Off but the savoury cake thing is right up my alley. Yum!’

Viewers were left in a state of shock after this week’s episode, when hosts Matt Lucas and Noel Fielding announced no one would be leaving the tent.

After two bakers, Rebs and Abdul, were off sick and couldn’t compete, judges Peu Leith and Paul Hollywood felt it was unfair to send any of the remaining bakers home.

However, their kindness means that the next episode, which will be Mexican week, will see two bakers sent home from the competition.