Gel made from the bark of a birch tree speeds up healing of wounds from burns, clinical trial finds

Tests on a gel, which contains betulin, showed it healed burn wounds quicker in 86 per cent of patients, compared to a typical gel used for burn treatment.

The extract of birch bark – used for centuries as a natural remedy – has previously been shown to help with skin wounds.

The new study was led by a team at the St Andrews Centre for Plastic Surgery and Burns at the Mid Essex Hospital NHS Trust.

Scientists have now proven its healing effects in a phase three trial, which was funded by the drug firm. Patients that used the birch-bark gel said it was ‘much better’.

The product will now be submitted for approval in the US and Australia.

The gel has already been approved in Europe for use in the treatment of partial thickness wounds (PTW) in adults.

However, it won’t be available to buy in Europe and the UK until at least the end of 2019.

Previously, the gel has been found to speed up wound healing in patients who had patches of skin cut out for surgical graft procedures.

It is being developed as a prescription medicine for epidermolysis bullosa (EB), rare inherited skin disorders that cause the skin to become very fragile and blister.

For this condition, as well as wounds from burns, there are very limited treatment options, the creators said.

The team, led by Quentin Frew, recruited 57 patients with superficial burn wounds – which usually take no more than three weeks to heal.

The burns had been caused by fire, scalding or touching hot objects within two days of the trial starting.

Each patients applied the birch-bark gel to one half of the wound, and a standard gel to the other half at least once every two days until their skin had healed. 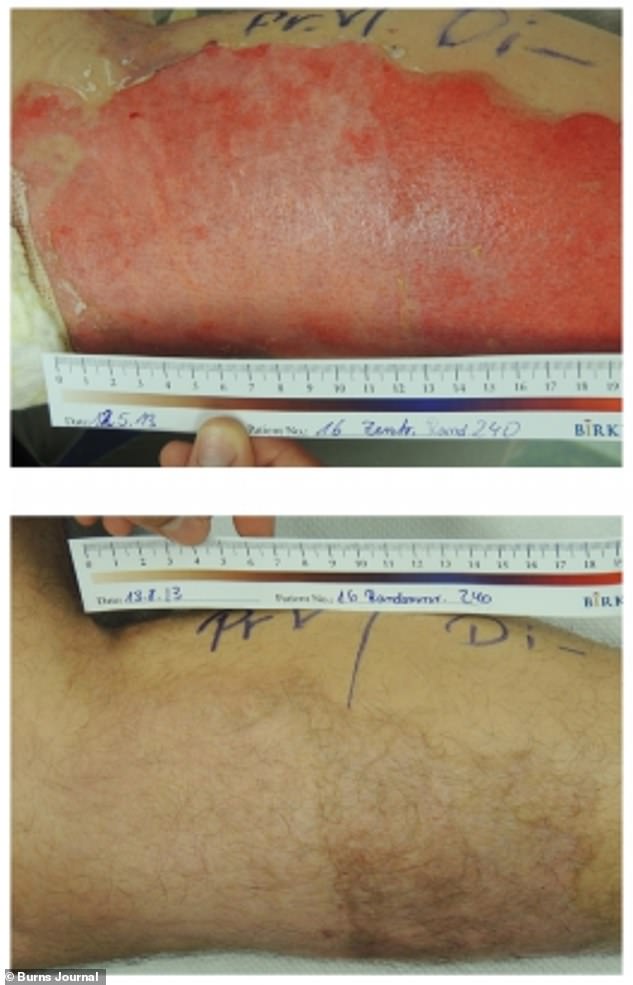 After three months (pictured bottom) and 12 months, the appearance of the birch-bark treated skin (left) was more like that of healthy skin in its texture and pigmentation compared to the standard gel treated skin (right)

The half treated with the birch-bark gel showed significantly better improvements than the standard gel, New Scientist reports.

At a three and 12 month follow up, the appearance of the birch-bark treated skin was more like that of healthy skin in its texture and pigmentation.

The slower a burn wound takes to close, the more visible scars may be.

Therefore, the fact the wound closed a day earlier when treated with the birch-bark gel may explain why it looked better many months later.

Wounds treated with Oleogel-S10 took an average of 7.6 days to heal, compared to 8.8 days with the standard gel.

Mr Frew said betulin appears to be the key ingredient causing the effects.

However, he added several other molecules, including oleanolic acid, have also been shown to have anti-bacterial and anti-inflammatory properties, which could also make an impact.

The topical product is formulated with the betulin chemical from the bark and sunflower oil.

It works by causing the keratinocytes – cells that regenerate the outer layer of the skin – to migrate and to branch the tissue between the wound and skin around it.

‘The goal in treatment of superficial partial thickness burns is wound healing without complications,’ the authors said in the report in Burns Journal.

‘In particular to avoid infections, to reduce the pain associated with these wounds, and to achieve a good long-term outcome in skin appearance.’

A previous trial of the product followed a similar method of treating half a wound with Oleogel-S10 and half with just a dressing.

Ten patients were enrolled who had EB, with 12 wounds, either recent or chronic, to be treated between them.

The gel was said to significantly accelerate the healing in eight wounds, with four left ‘undecided’, but none in favour of only dressing.