She’s a self confessed diva who found fame on The Only Way Is Essex.

And Gemma Collins, 39, oozed confidence as she arrived at the Barclays Souvenir Swap Shop event in Soho, London on Saturday.

The reality star showed off the results of her three stone weight loss in a blue patterned maxi dress, with elasticated waistband and free flowing long sleeves.

She accessorised the look with a pair of diamante sunglasses, silver gladiator sandals and the diamond cross necklace that James Argent had given her for her birthday, as she was pictured walking into the event.

Gemma looked glamorous with her long blonde hair styled into subtle beach waves and a natural makeup palette, which complimented her sun-kissed glow.

Before her arrival, the star kept her fans up to date as she made her way to the event.

Gemma was enlisted to host the event on behalf of Barclays, who have recently launched a campaign which gives people the chance to exchange their unwanted souvenirs to celebrate the launch of its new Travel Wallet.

The star has had a rather hectic 24 hours, as she spent the day yesterday soaking up the sun in Mykonos, Greece.

Details: She accessorised the look with a pair of diamante sunglasses, silver gladiator sandals and the diamond cross necklace that James Argent had given her for her birthday

‘Goodbye Mykonos. Back to work for the GC everyone wants a slice,’ she captioned alongside a photo of a plane on her Instagram story.

And she thanked airport staff for assisting her with her journey, saying: ‘Thank you Border Force for getting me through the airport so quick.’

On Friday, Gemma was seen living her best life as she slipped into a Versace-inspired swimsuit and looked body confident as she smoked, necked champagne and went jet-skiing with various different men.

Money talks: Gemma was enlisted to host the event on behalf of Barclays, who have recently launched a campaign to celebrate the launch of its new Travel Wallet 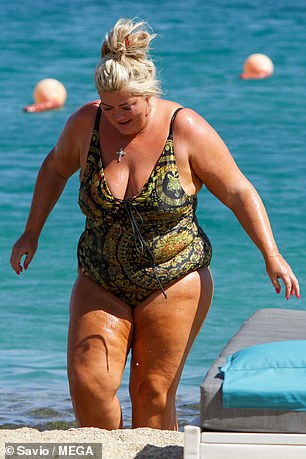 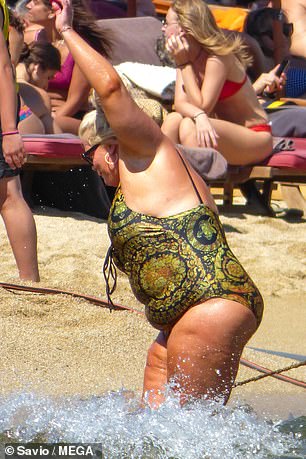 Diva forever! It looks like Marbs is no longer Gemma Collins’s number one holiday destination as she was spotted living her best life in Mykonos, Greece on Friday

At one point, the blonde beauty nearly fell over in the sea as she was nearly pulled over by a rather lively wave, but she managed to regain her composure in the nick of time.

Gemma has been keeping her fans up to date with her travels on her Instagram page, and she couldn’t resist flaunting her weight loss as she shared a collection of videos and photos to her story.

In one clip she focused the camera up and down her physique as she posed with a friend and revealed: ‘Holding the camera up so they can see my swimsuit!’

A different video saw Gemma sip a flute of Champagne as she exclaimed: ‘When in Mykonos guys, happy Friday!’ 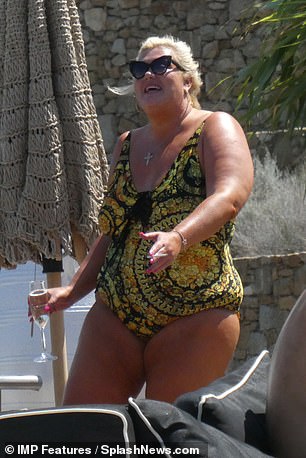 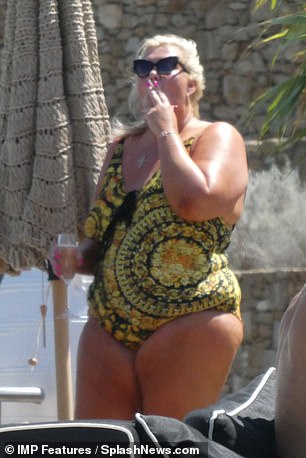 Loving life: Gemma appeared to be in the mood to party as she sipped on a glass of bubble and puffed on a cigarette during her trip to the exotic island 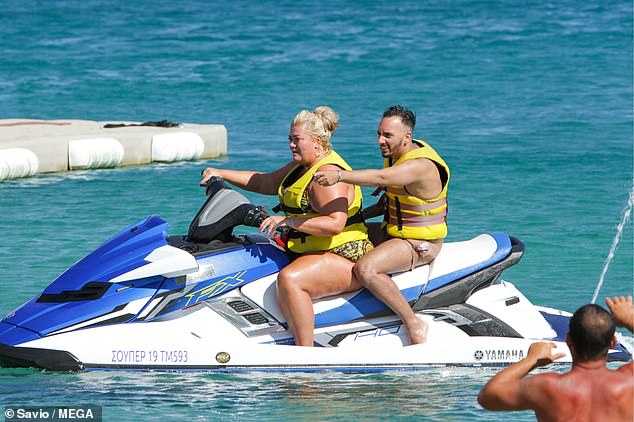 Speed demon: Gemma felt the need for speed as she navigated the waters on her jet ski

And she later thanked staff at Jackie O’ beach club after spending the night partying with revellers there.

She wrote: ‘The best place on EARTH �� I only was there for 24 hours but that’s what DIVAS do … RIGHT✌�� what a welcome to be called a GLOBAL ICON #mykonos #globalicon @jackieomykonos @priscilla_drag @jeffmehmet1 @aaronfrew @jaybirmingham_ @I am maximos @sakiiis the best 24 hours thank you x’

It was recently claimed that Gemma’s recent weight loss has been assisted by £250 weight loss injections.

According to The Sun Online, she has been taking SkinnyJab injections that act as an appetite suppressant.

The website boasts that the jabs ‘regulate the glucose level in your blood, allowing your body to use your stored fat for energy.

This means that you can safely consume small portions without experiencing the undesired effects of starvation mode.’

Gemma began shedding the weight following her appearance on Dancing On Ice earlier this year, where she took part in gruelling ice skating routines alongside her skating partner, Matt Evers, 43. 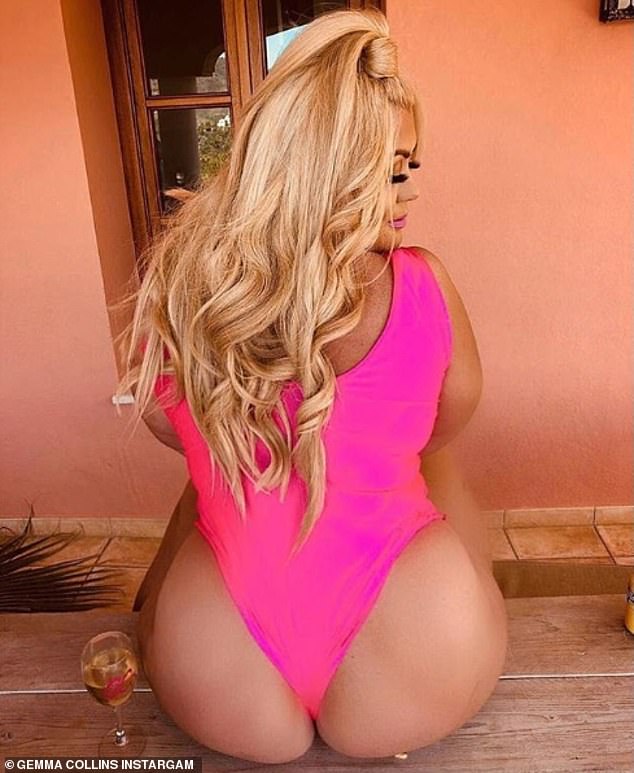 Shedding the pounds: Gemma has recently been showing off the results of her three stone weight loss on her social media (pictured earlier this month) 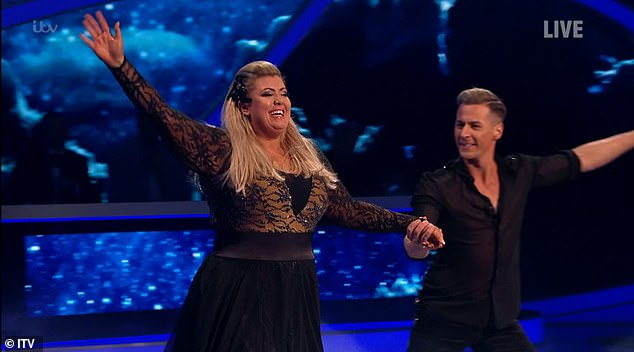 The start: Earlier this year the TOWIE star appeared on Dancing On Ice, where she took part in gruelling ice skating routines alongside her skating partner, Matt Evers, 43