The mystery illness that left Gemma Collins on a drip had clearly passed as the TV personality helped fiancé Rami Hawash celebrate his 49th birthday on Wednesday.

Stepping out in central London, the 41-year old TV personality was full of energy ahead of a dinner date with the Essex based garage owner at upmarket Mayfair bar-restaurant Sexy Fish.

Complimenting her figure in a black silk dress, Gemma – who has lost a reported three stone after overhauling her diet – caught the eye as the couple made their way inside the popular Asian eatery.

Upbeat: The mystery illness that left Gemma Collins on a drip had clearly passed as the TV personality helped fiancé Rami Hawash celebrate his 49th birthday on Wednesday

The pair were accompanied by close friend Jonathan Cheban while enjoying drinks at the venue before making their way to neighbouring Russian restaurant Novikov on a passing rickshaw.

The costly order includes a kilo of caviar, mini croissants, mini brioche buns, a variety of nibbles and an assortment of condiments.

Despite it being Rami’s big day it was Gemma on the receiving end of a romantic gesture, with her fiancé gifting her a freshly cut red rose that she held while making her way across Berkeley Square.

The former TOWIE cast-member appeared to appreciate the gift and reciprocated planting a kiss on Rami’s lips as they moved from one venue to another. 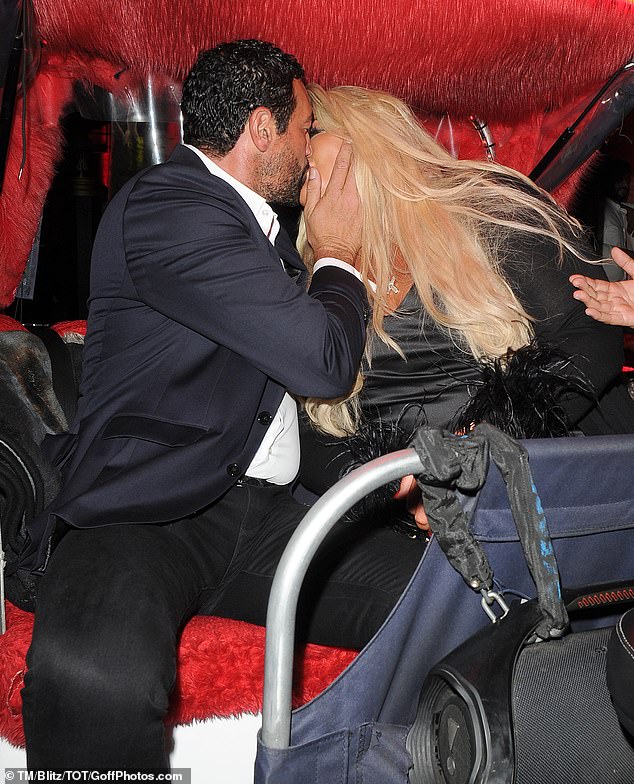 Smitten: Gemma and Rami shared a lingering kiss during a rickshaw ride in central London 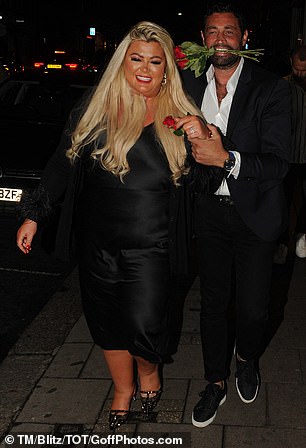 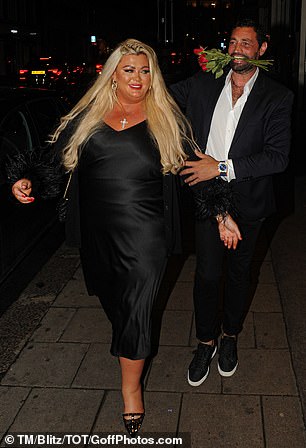 Looking good: Gemma – who has lost a reported three stone after overhauling her diet – caught the eye as the couple made their way inside Mayfair restaurant Sexy Fish 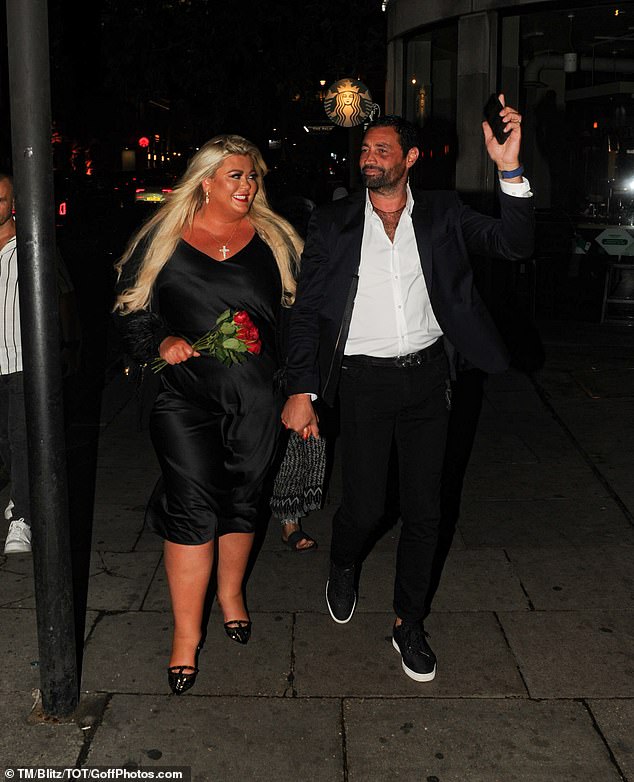 Feeling better: The TV personality had a spring in her step during her latest outing with Rami

Gemma was forced to seek urgent medical attention after collapsing during filming in Wales earlier this month.

The former TOWIE star explained how she became ‘really unwell’ with a mystery virus, with her fiancé Rami Hawash fearing he’d have to have to rush her to hospital.

Speaking to OK! Magazine, she said her ‘body was having none of it’ after suffering a bout of ill health combined with a heavy workload. 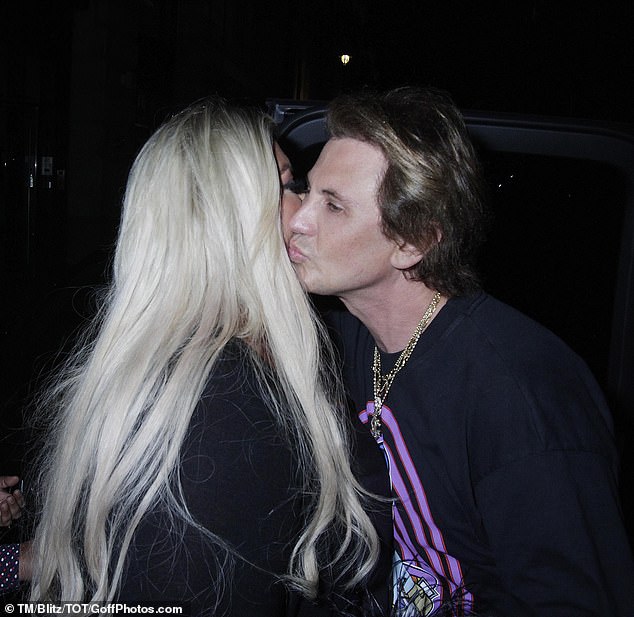 In good company: The pair were accompanied by close friend Jonathan Cheban while enjoying drinks at the venue 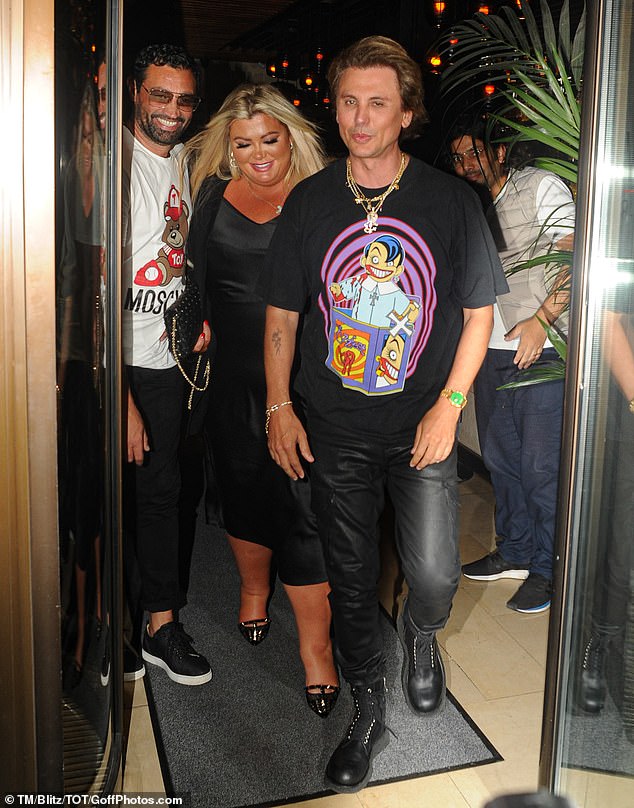 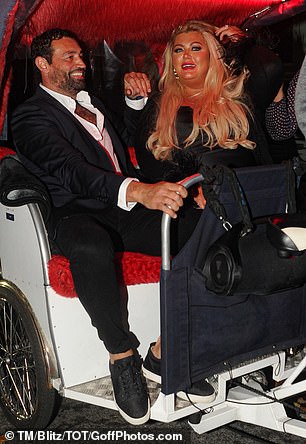 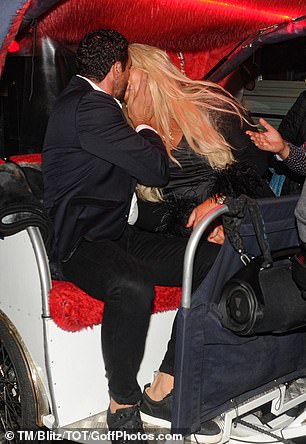 Here we go: Gemma and Rami boarded a rickshaw before making their way to another Mayfair restaurant on Wednesday evening 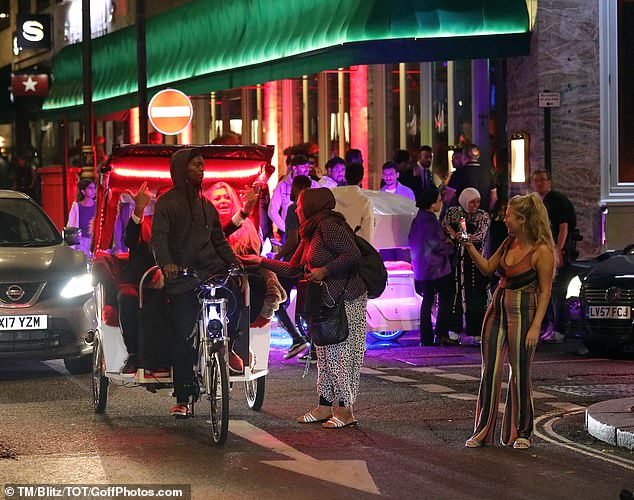 Say cheese: Revellers paused to get photos of the pair as they set off across Berkeley Square

Gemma was previously diagnosed with an under-active thyroid, and said she started to feel ‘very unwell’ during a recent stint of filming in Wales.

She said: ‘I have been so ill I cannot tell you. My workload has been a lot, but I’ve had a virus. I’ve been really, really, really unwell. I literally had to film up in Wales and I was very unwell.

‘I had to call the doctor out and the doctor said to me, “Look I’m going to give you medicine but I actually think this is a virus and it’s not going to work.”‘ 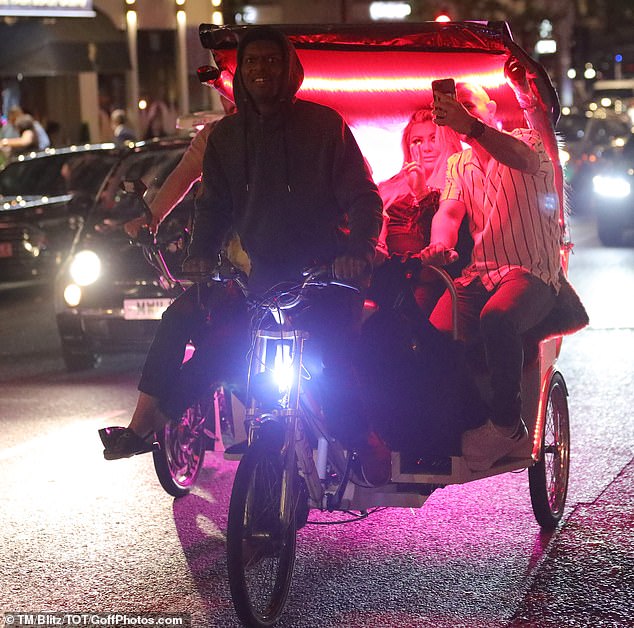 Night on the tiles: The pair were hard to miss as they set off on their three-wheeler with a friend 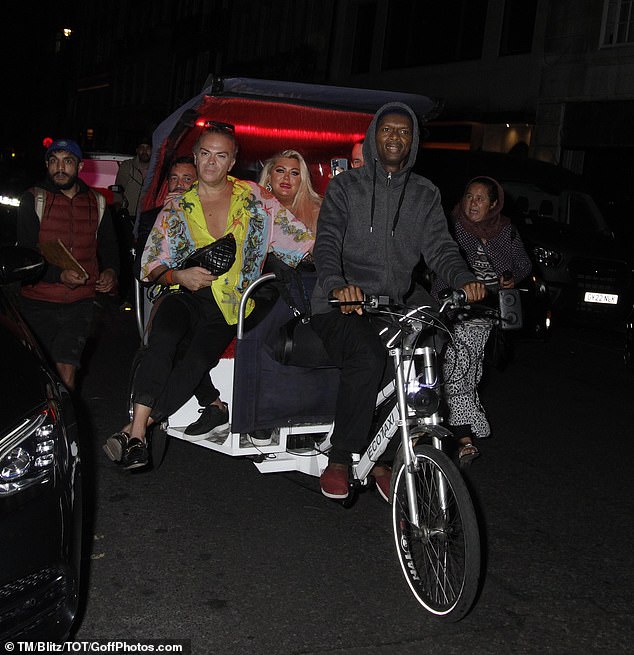 Make way: Gemma and her small group crammed into the rear of the rickshaw as it took them to neighbouring Russian restaurant Novikov 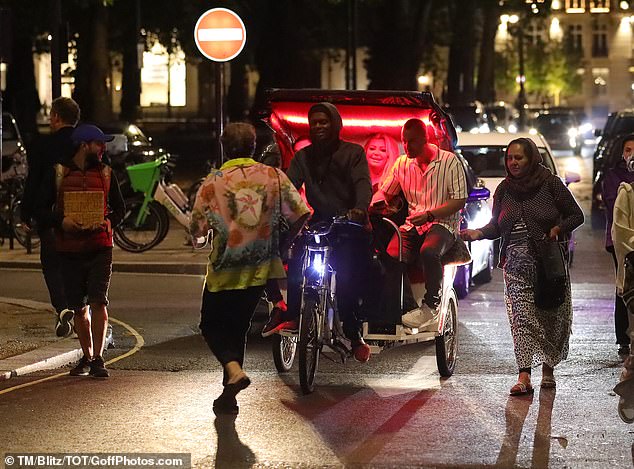 Keep up: Onlookers did their best to keep pace with the vehicle during its short journey

Gemma said that she tried to continue with work but her body was ‘having none of it,’ and she went on a drip to help ease her symptoms.

‘This time my body was having none of it. Basically, I’ve been on drips. Rami nearly had to take me to the hospital on Saturday night because I was collapsing on the floor,’ she explained.

Gemma has recently been sharing photos of drips attached to her arm on Instagram as she continues to battle symptoms. 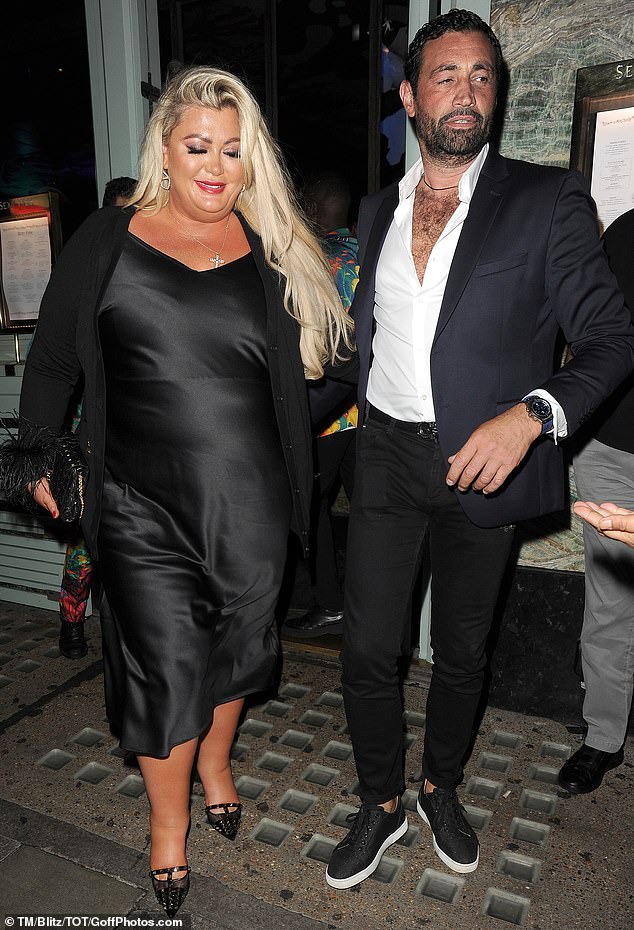 Lovely: Gemma rounded off her look with a pair of black strappy shoes and a matching handbag – her only notable accessory 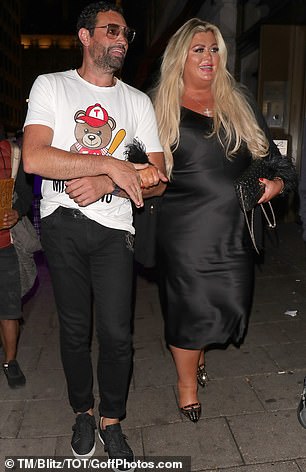 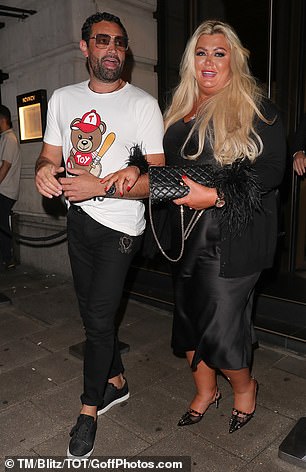 Steady on: Rami later stripped off his jacket, revealing the white statement T-shirt beneath 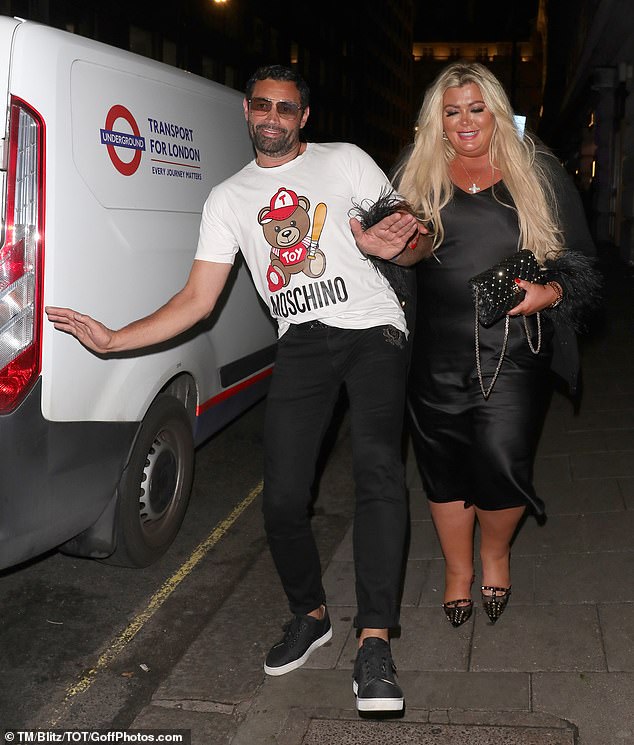 Banter: The birthday boy shared a light-hearted moment with onlookers as they made their way across the street on Wednesday evening

The star has been busy filming for a new reality show – More Than Daffs and Taffs which will see celebs with a connection to Wales immerse themselves in the Welsh culture, to shine a light on the preconceptions they may have of the country.

Gemma has lost an impressive 3.5 stone thanks to her committed workout regime and healthy eating after ditching fad diets, recently revealing her salad consumption has left her ‘verging on a Kardashian.’

Speaking exclusively to MailOnline, Gemma said that despite her health kick she still loves ‘what her mumma gave her’.

Discussing her healthier diet, the star said: ‘I think it comes down to being happy, now I manage my day and I make sure I have my breakfast in the morning.

‘I’m verging on a Kardashian at the moment I’ve been eating so many Caesar salads’. 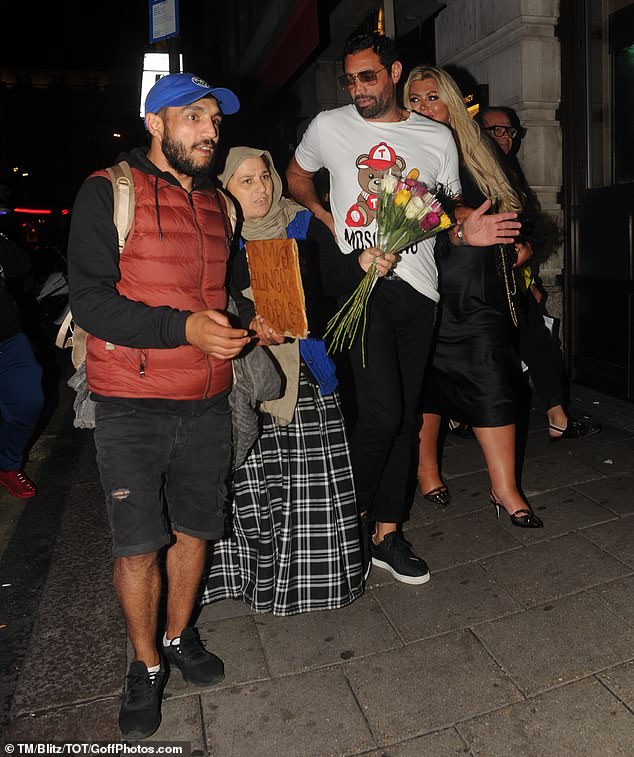 Side by side: The pair were pictured alongside a couple of local street traders in Mayfair 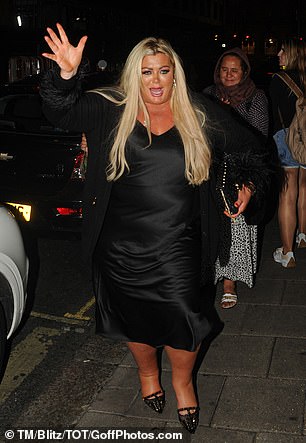 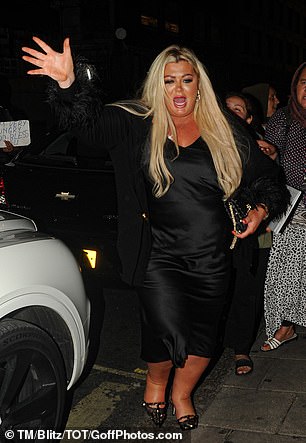 Taxi for Collins! Gemma appeared to flag a cab as she readied herself for the journey home 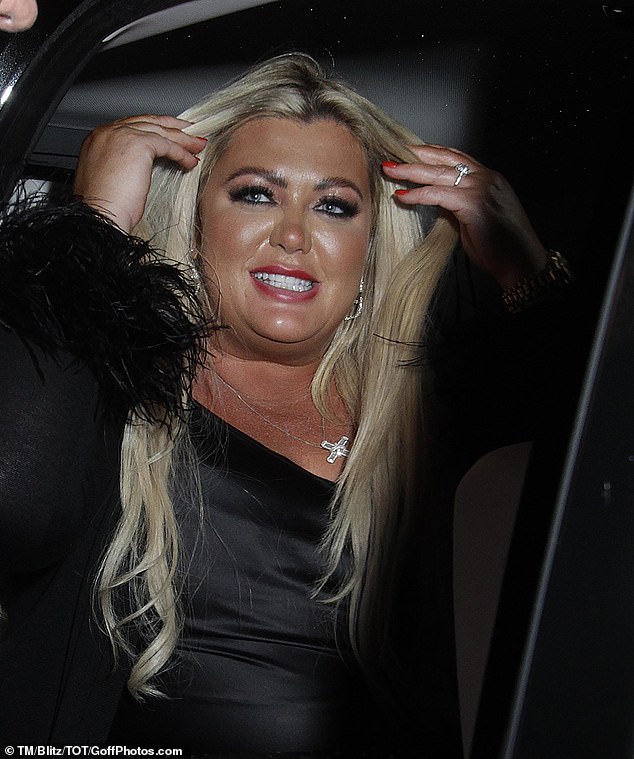 Let’s go: Gemma grinned after climbing into the rear of her taxi as the night came to an end 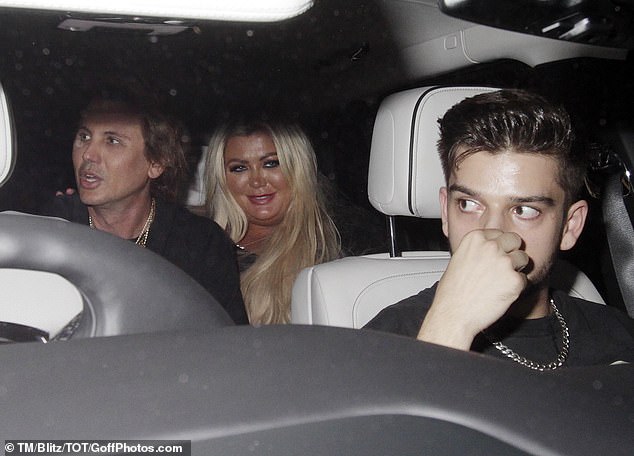 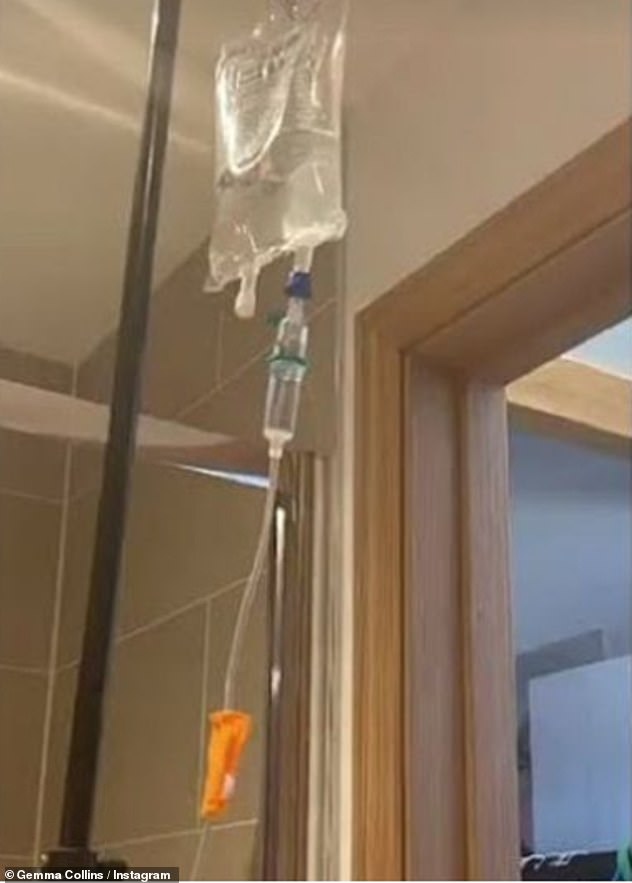 Collapse: The former TOWIE star recently explained how she became ‘really unwell’ with a mystery virus and has received treatment via drips, posting photos on Instagram