She’s been proudly sharing shots of her newly slimmed down physique in a variety of bikinis during her sunny break in Mykonos, after losing 3 stone in weight.

And Gemma Collins, 39, stayed true to form on Friday, when she shared new snaps of herself posing in a bright yellow and pink floral bikini, teamed with a cover up.

Teaming her swimwear with a pair of bold Dolce & Gabbana sunglasses, the TOWIE star, who recently split from James Argent, wowed as she posed in a grand doorway.

All things bright and beautiful: Gemma Collins shared a shot of herself posing in a bright floral bikini with a matching cover up as she holidayed in Mykonos on Friday

With her flaxen locks falling past her shoulders in soft waves, the reality TV star kept her makeup light and natural for the images, which showed her wearing flip-flops.

Captioning the post, she shared a quote attributed to Oprah Winfrey, which read: ‘The more you praise and celebrate your life, the more there is in life to celebrate.’

Gemma has flown out to Mykonos with her personal trainer pal and former TOWIE star Charlie King to help heal her broken heart. 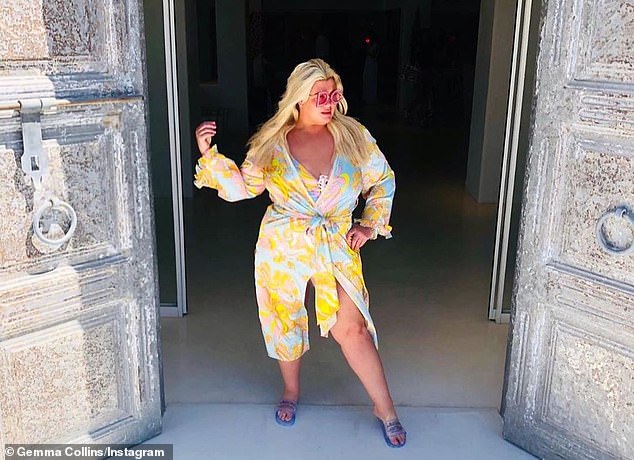 Bold: Teaming her swimwear with a pair of bold Dolce & Gabbana sunglasses, the TOWIE star, who recently split from James Argent, wowed as she posed in a grand doorway

The Diva Forever star, who has been vocal about her use of controversial £250 SkinnyJabs, has reportedly booked a boob job because her ‘body is getting smaller’.

She told The Sun: ‘I can’t wait to get rid of these boobs, they’re massive and look ridiculous. I have never looked better than I do now and I’ve never felt so good.’

While admitting it tends to be the ‘norm’ to opt for larger breasts when booking cosmetic procedures, Gemma insisted that she wants a her natural boobs reduced.

She added: ‘I never have wanted surgery. But as my body is getting smaller, I feel like I am falling over on top and I just want them gone.’ 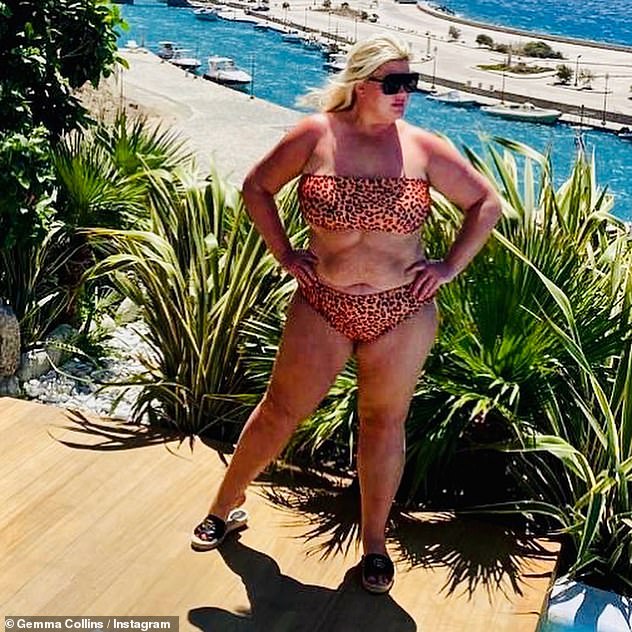 Confident: On Thursday, the slimmed-down star shared an empowering message on Instagram, telling fans she felt ‘liberated’ as she posed in a leopard print bikini

Meanwhile, her ex Argent seemed to be moving on from the couple’s recent love split by partying with close friends in Marbella.

He was in high spirits during an appearance at popular local nightspot Olivia’s La Cala, owned by old friend and former co-star Elliott Wright.

Argent, 32, was in good company as he let his hair down with Romana Bright – the younger sister of ex-girlfriend Lydia.

Argent and Gemma ended their relationship in July after she revealed a string of abuse messages, purportedly sent to her by the TV personality prior to their split. 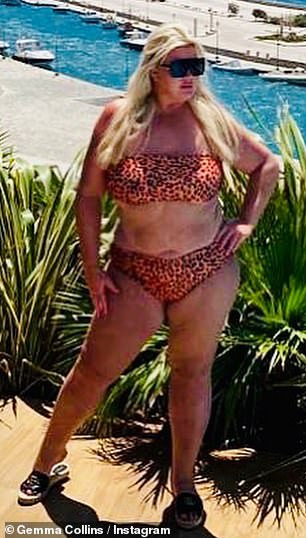 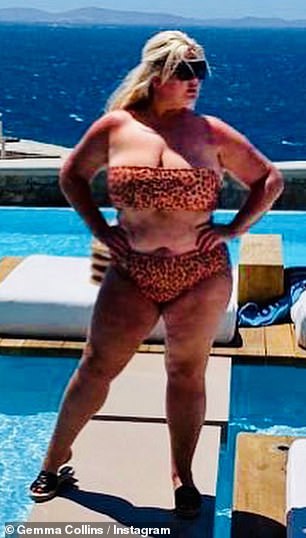 Walk on the wild side: The TOWIE star, 39, who has lost three stone in recent months, showed off her slimmer figure in the strapless animal print two-piece as she posed by the pool

It’s understood that Argent had made derogatory remarks abut her weight after she suggested that he had bought another woman dinner.

The series of texts began with Gemma saying: ‘What man pays for another woman!!!’, while Arg responded by saying: ‘Insensitive.’

Clearly riled, the blonde said: ‘And the woman that saved your life has to pay for herself!!!’ Her next message was masked, but her now-ex responded: ‘You are supposed to be treating me you hippo.’

Moments later, Gemma uploaded another series of messages, where he sent her a plane emoji in reply to a picture of flight details. 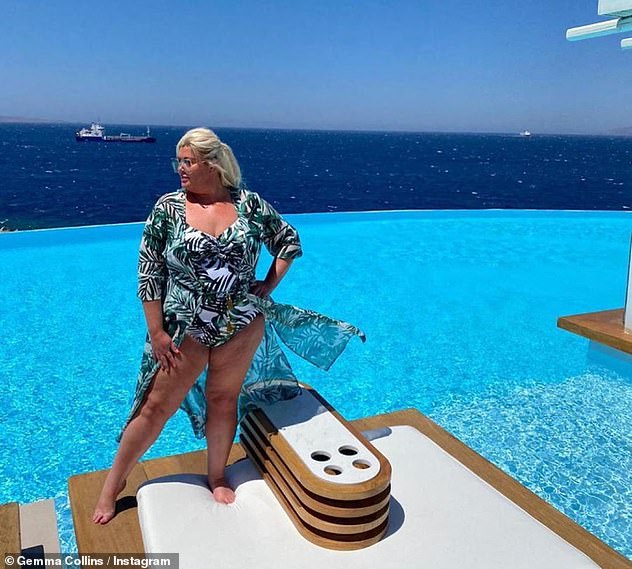 Work it! It comes Gemma declared she was ‘all woman’ as she posed up a storm in a plunging palm-print swimsuit on Wednesday

The self-proclaimed diva has decided to take some time off social media, citing that she was ‘devastated’ and ‘heartbroken’ by the exchange.

However after returning to the UK from her own Tenerife getaway, Gemma apologised to her former beau for releasing the messages.

In a screenshot obtained by MailOnline, the Diva On Lockdown star contacted her fellow reality star in the early hours of the morning. 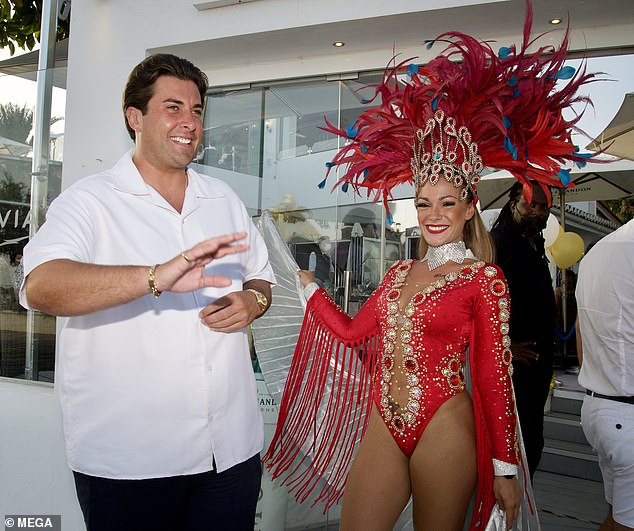 Good times: The dust appeared to be well and truly settled on Thursday evening as James Argent moved on from his recent love split by partying with close friends in Marbella

She wrote: ‘I am sorry about putting the messages up, I was just so hurt you suggested an open relationship, it didn’t look like a joke when you typed it.

‘I was so upset but I shouldn’t have put the messages up, that was anger on my part which was wrong. I am so sorry about that x.’ (sic)

It’s been a tough year for Argent, with him recently admitting that he is a cocaine addict and that he had overdosed twice last year before hitting rock bottom over Christmas and calling his friend and former co-star Mark Wright for help.

He checked himself into a 10-week bootcamp at The River rehab facility in Thailand earlier this year where he kicked his habit and lost five stone in the process. 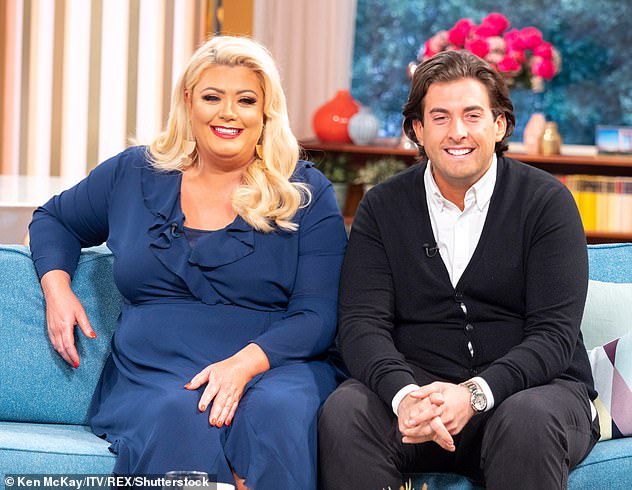 Horrible: The couple explosively split earlier in July when she revealed messages between them where James called her a ‘hippo’ and a ‘fat f**k’ (pictured in 2018)