Former Gen. David Petraueus warns in a new interview about the risks of Al Qeda reemerging in Afghanistan, and criticizes the Biden Administration’s withdrawal from a conflict he served in as premature.

Petraeus, who helped formulate the counterinsurgency strategy believed to have helped the U.S. cultivate allies on the ground and ultimately pull back from Iraq, defended some of the nation’s efforts at what critics call ‘nation-building’ – even as he allowed much of what the U.S. did was ‘overbuilt.’

The former CIA director said without U.S. trainers or advisors on the ground, terrorist threats could reemerge.

‘It’s easy to say, “You got Osama Bin Laden. What are you hanging around for?”’ he told the New Yorker in an extended interview.

‘It’s easy to say, “You got Osama Bin Laden. What are you hanging around for?”’ Gen. David Petraeus told the New Yorker in an extended interview

‘Well, because Al Qaeda will be back. If there is one thing we should have learned in the last twenty years of war, it’s that if you don’t keep an eye on an Islamist extremist group, it will come back,’ he warned, in an interview published on a day President Biden said Al Qaeda was no longer present on the ground.

He defended the role of a ‘comprehensive approach,’ after the U.S. spent much of two decades during the war not only defeating the Taliban, but paying Afghan security, overseeing construction, and undertaking training on a mass scale.

‘If you want to really deal with the problem, you can’t counter terrorists like Al Qaeda or the Islamic State with just counterterrorist forces. You have to have something that is more comprehensive. You need all those elements, but we don’t want to do that,’ he told the magazine.

He also took on President Biden’s contention that Americans couldn’t carry out a war that Afghans wouldn’t take on, after local forces melted away amid the Taliban advance.

‘American troops cannot and should not be fighting in a war and dying in a war that Afghan forces are not willing to fight for themselves,’ Biden said this week. 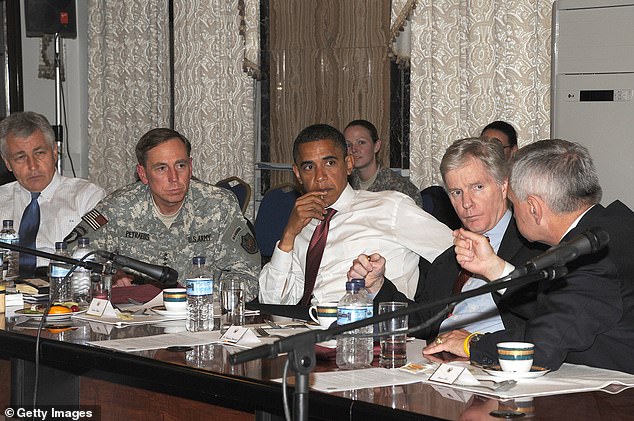 Petraeus defended Afghan forces who died on the battlefield 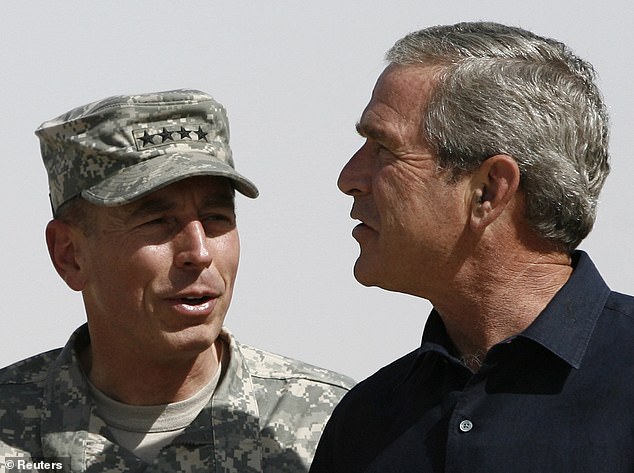 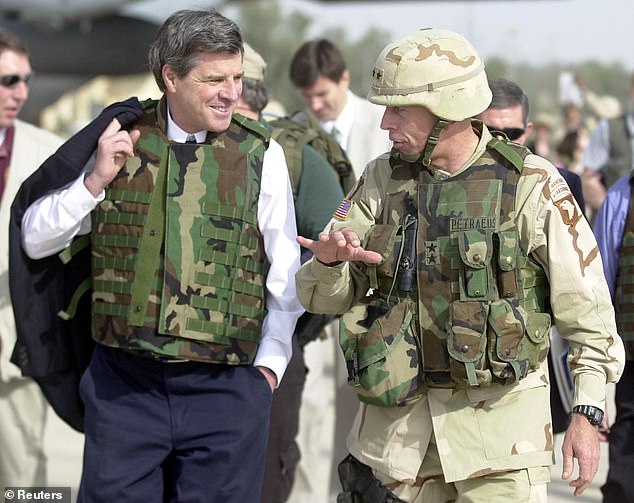 He defended nation-building aspects of the U.S. role. Here he is seen with former U.S. administrator for Iraq Paul Bremer, during the ill-fated Iraq reconstruction phase 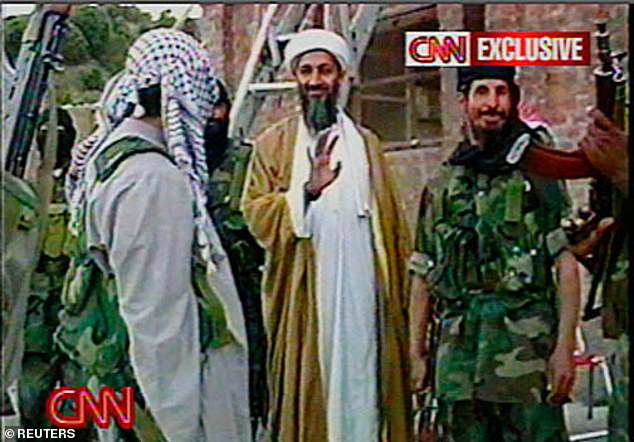 Petraeus wanred Al Qaeda could reemerge in Afghanistan. It became a safe haven for Osama bin Laden before Sept. 11th 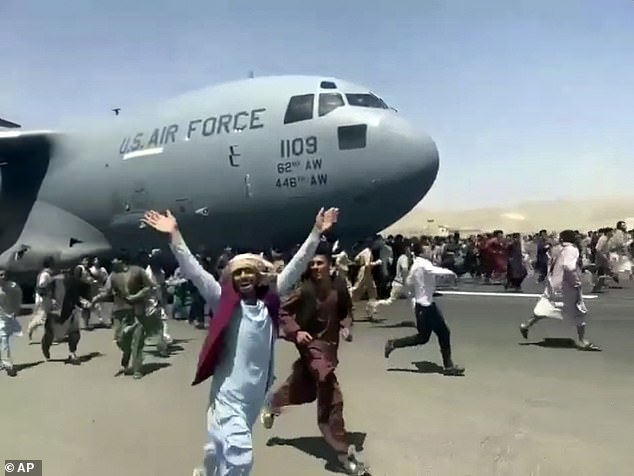 Hundreds of people run alongside a U.S. Air Force C-17 transport plane as it moves down a runway of the international airport, in Kabul, Afghanistan, Monday, Aug.16. 2021 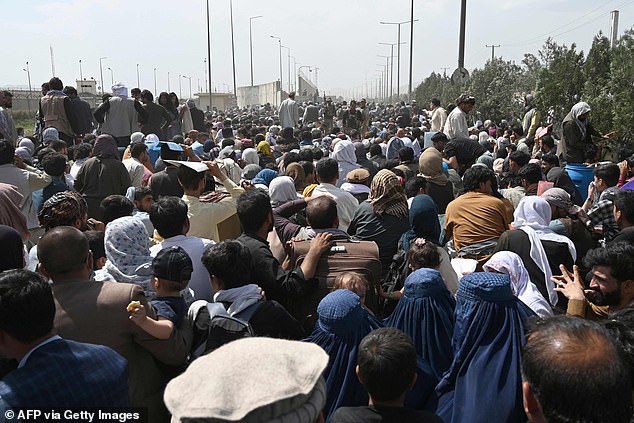 Afghans gather on a roadside near the military part of the airport in Kabul on August 20, 2021, hoping to flee from the country after the Taliban’s military takeover of Afghanistan

‘Anybody who served in Afghanistan knows a number of Afghans who died on the battlefield, which is something like twenty-seven times the number of U.S. losses,’ said Petraeus, who suffered a scandal at the end of his storied career by leaking classified information to his biographer, with whom he was having an affair.

‘So to say that the Afghans won’t fight for their country needs an asterisk. And it should say the Afghans will fight for their country if they are confident someone has their back and will provide reinforcements of ammunition, food, medical supplies, will provide emergency medical evaluation, and, most important, will provide close air support to get them out of a tough fight. Keep in mind, again, that the Taliban could mass anywhere on what were some isolated outposts,’ he said.

One of his faults with the pullback is that the U.S. took away experienced trainers who worked with Afghans to provide close air support on missions.

‘Afghanistan had so many disadvantages, no history of strong central government,’ he said, listing some of the problems the U.S. and allies encountered.

President Obama ultimately surged troops into Afghanistan, but Petraeus listed an initial failure to send in enough forces immediately after the fall of the Taliban.

‘Look, again, clearly there were tons of mistakes made along the way. Let’s focus on the most important one, which I happen to have said publicly, which was that we didn’t even get the inputs right in Afghanistan until late 2010,’ he said.

‘But of course we only had the inputs right for about seven months, because Obama announced the withdrawal date to begin the redeployment of those forces during the speech in which he announced the buildup. If [the former special representative Richard] Holbrooke is trying to negotiate from a position of strength, telling the enemy you are going to start withdrawing in July of 2011 probably is not providing him that position of strength,’ he said.

He acknowledged some U.S. projects were ‘overbuilt’ in an effort whose price tag could be as high as $2 trillion.

‘This kind of stuff. Threw resources at problems. You have them now and you are not going to have them a year from now, if you see what I mean,’ he said.

But the general is not prepared to say the U.S. ‘lost’ the war he served in.

‘Somebody asked me if we lost the Afghan war. I said I don’t think we lost it. I think we withdrew from it. And I think there is a pretty big distinction there,’ he said.