The fledgling field of gene therapy has scored another win: An experimental treatment seemed to help boys with the inherited nerve disease featured in the movie Lorenzo’s Oil.

Fifteen of the 17 boys treated in a study had no major disability two years later — remarkable for a disease that often causes swift decline and kills within a decade.

‘This appears to be a terrific new therapy’ for many kids who had little hope before, said one study leader, Dr. David A. Williams of Boston Children’s Hospital.

The news is bittersweet for Paul and Liliana Rojas, a couple from Dover Plains, New York, with two sons who have the disease. Brian, seven, received the treatment; Brandon, 10, didn’t.

Bittersweet: Paul and Liliana Rojas speak to their sons, Brian, second from left, and Brandon, at Boston Children’s Hospital. The young boys suffer from adrenoleukodystrophy, an inherited nerve disease. Brian was able to benefit from an experimental treatment while the disease had progressed too far in Brandon to qualify for the gene therapy study 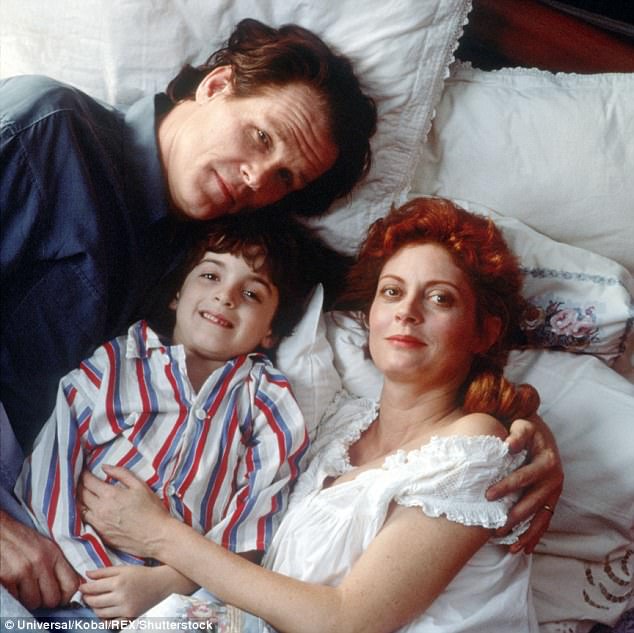 The disease was featured in the 1992 movie Lorenzo’s Oil (pictured), based on a true story

WHAT IS ADRENOLEUKODYSTROPHY (ALD)?

ALD is a rare, genetic disorder that is characterised by the breakdown of the myelin sheath – that surrounds the nerve cells in the brain – and the gradual deterioration of the adrenal glands.

Patients accumulate high levels of saturated, very long chain fatty acids in the brain and adrenal cortex because they do not produce enzymes that break down fatty acids

Onset of the classic – and most serious – childhood form of ALD only affects boys and tends to occur between the age of 4 and 10.

Initial symptoms include behavioural changes such as withdrawal or aggression, poor memory, and poor school performance.

Death usually occurs within 10 years of developing the ALD.

There is no cure and treatment usually involves medication to improve symptoms, a no-fat diet and daily doses of Lorenzo’s Oil.

Lorenzo’s oil was created by a father whose son, Lorenzio, suffered with ALD.

His oil was high in oleic acid and was found to lower the fatty acids in the brain.

While there has been scepticism surrounding how much it can improve symptoms, experts in the field do admit that the oil works more effectively than any other medical approach that had been tried.

Brandon was too far along in his disease to qualify for the study, his father said. ‘Brian was not. Thanks to Brandon he was diagnosed early,’ in time to be helped.

Study results were published Wednesday by the New England Journal of Medicine and discussed at a medical conference in Kansas City, Missouri. Government grants and the therapy’s maker — Bluebird Bio Inc. of Cambridge, Massachusetts — paid for the study, and some researchers work or consult for the company.

Only one gene therapy is sold in the United States, a leukemia treatment approved in August. Only a few are sold elsewhere. Researchers increasingly are trying these approaches for diseases caused by a single gene, as this one is.

Called adrenoleukodystrophy, it almost exclusively strikes boys, who have only one copy of the X chromosome, where the gene that causes the disease lies. It affects about one in every 20,000 boys worldwide.

They are unable to make a protein that helps break down certain fatty acids, causing the acids to build up and damage nerves, muscles and the brain.

Their plight became better known after the 1992 movie about a couple who, desperate for a cure for their son, developed a treatment from olive and rapeseed oils that seemed to help him. The real life Lorenzo died in 2008 at age 30, having lived two decades longer than doctors predicted.

Lorenzo’s oil did not turn out to be a cure. The only effective treatment is a stem cell transplant from a matched sibling, but only about 1 in 5 boys with the disease have such a donor.

The gene therapy tested a way for boys to serve as their own cell donors.

Doctors remove some of the patient’s blood stem cells, modify them in the lab to carry the healthy gene and give them back intravenously.

Before the modified cells are returned, patients take strong medicines to destroy much of their native bone marrow. That helps the genetically modified cells take hold and multiply, so they can supply the protein that the boys lack.

The study tested this treatment in 17 boys ages 4 to 13 with the most severe form of the disease that affects the brain. Two years after treatment, 15 were neurologically stable. The other two died, one from worsening disease and the other from complications of a donor transplant attempted after he withdrew from the study.

The results suggest this therapy is at least as good as stem cell transplants given to boys who have suitable donors ‘and it is possibly safer,’ Dr. Marc Engelen of Emma Children’s Hospital in Amsterdam wrote in a commentary in the journal.

The main questions are how long the benefits will last, how much the treatment will cost if it wins approval, and whether it will replace stem cell transplants from donors, he wrote. 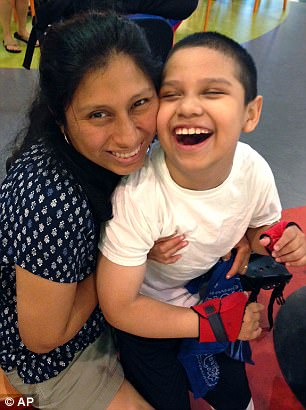 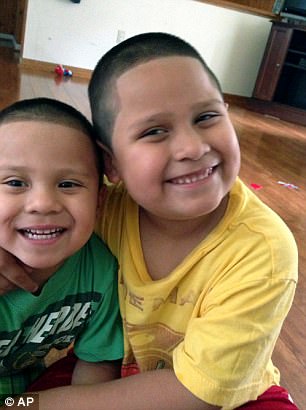 The family from New York has been a poster example of how the treatment can help the disease which primarily affects boys. Pictured: Brandon and his mom Liliana (left), and Brandon with his brother Brian (right)

The U.S. Food and Drug Administration requires gene therapy participants to be monitored for 15 years, so these patients will continue to be studied, Williams said.

Eight more patients are being added to the study as part of Bluebird’s plans to seek approval of the therapy in the U.S. and Europe.

Brandon Rojas now needs a wheelchair and feeding tube. He had been a healthy, normal child until suddenly starting to drool and have learning problems in school about the time he turned seven.

He was diagnosed three years ago and doctors advised the couple to have Brian tested too. They were on a Make-A-Wish Foundation trip when the results came.

‘We were driving to one of the Disney parks and had to pull over to get the call,’ Paul Rojas said. ‘Once we got off the phone, we both looked at each other and said we need to move forward now and save our younger son any way we can.’

The couple has joined an effort to increase newborn screening for the disease, especially now that a therapy may soon be available to help — if it’s tried soon enough.