Armed forces chief General Sir Nick Carter says it is ‘too early to say’ if the West were beaten in Afghanistan as he claims ‘Taliban 2.0 is different’

The head of the British armed forces said is too early to say the Nato alliance suffered a defeat in Afghanistan.

General Sir Nick Carter said in evidence to the Commons Defence committee that the Taliban authorities who took over after the collapse of the Afghan government in August were very different to the previous Taliban government.

Under their rule he said it was possible Afghanistan could become a more inclusive country than would otherwise have been the case.

He said: ‘Taliban 2.0 is different. There are a lot of people in Taliban 2.0 who who would like to govern in a more modern way, but they are divided among themselves, as political entities so often are.

‘If the less repressive elements end up gaining control… then I think there is no reason to suppose that Afghanistan over the next five years might not turn out into a country that is more inclusive than it might have otherwise.

‘I think it is too early to say that defeat has occurred. Victory here needs to be measured in the results and not some great military extravaganza.’

British forces were never defeated on the battlefield in Afghanistan, the head of the UK’s armed forces said.

He said: ‘What unravelled the whole effort was the political context in which all of this was conducted.

‘I am very proud of what our armed forces achieved on the battlefield. They were never defeated by a very cunning, ruthless and innovative opponent.’

He defended ‘bullish’ comments he made predicting the Afghan government would survive, despite his fears morale was being undermined by the withdrawal of foreign forces.

The army chief said: ‘The plan was to try to get the Afghan government to hang in and hold it together.

‘I am one of the voices they listen to, more so probably than any other foreigner other than the odd American.

‘If I had said that, then definitely I would have undermined them even more than they were undermined.’

He also defended comments he made saying Britain had to be ‘very careful using the word enemy’ when referring to the Taliban. 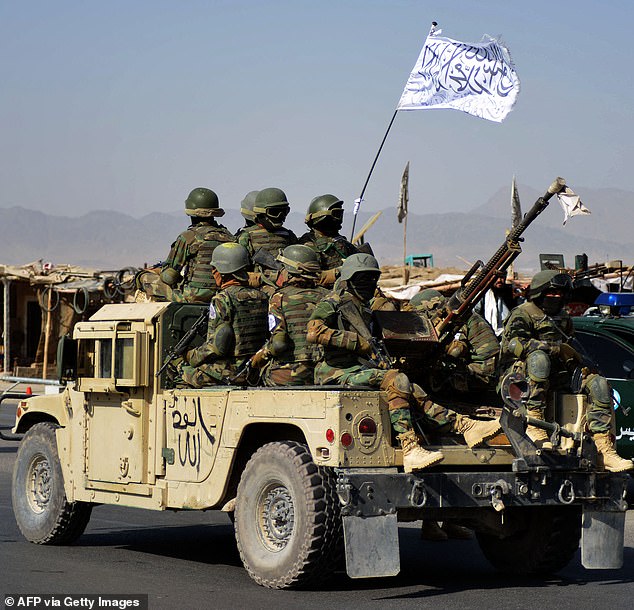 The army chief also defended comments he made saying Britain had to be ‘very careful using the word enemy’ when referring to the Taliban. Pictured: A Taliban military parade of the Al-Badr unit in Kandahar on November 8, 2021

When questioned on why he called the Taliban ‘country boys’, he told Defence Committee MPs:   ‘Just to put a couple of things straight on that quote.

‘I was quoting from (former Afghanistan) president (Hamid) Karzai, which I said in the interview.

‘And the second point I’d like to put on record is that I suspect people will be quite surprised to hear me say they are not the enemy.

‘The reason I said that was that I had 1,000 troops on the ground and we were trying to evacuate what turned out to be 15,000 Afghans, and I wasn’t exactly, at that particular point in time, going to call out the people who could have quite easily made my life very uncomfortable on the ground.’

When discussing the success of the military effort in evacuating Afghans to reach the UK since British forces withdrew, he said: ‘The answer is that there are still, I’d guess, about 300-odd who we’d like to see leave Afghanistan but the challenge is how you achieve that.’