It had threatened to be one of those night, the kind Jurgen Klopp is prone to having, until Alex Oxlade-Chamberlain jabbed out his right leg.

Liverpool’s crucial Champions League clash with Genk had reached the 57th minute, when Naby Keita touched a ball into Roberto Firmino and the Brazilian cushioned a pass into the path of the onrushing midfielder.

Little had satisfied Klopp to this point. He tries to be a more reserved character on the sidelines these days, refraining as best he can from emotion and animation, but from early on it was apparent that Liverpool’s manager was irritated by most of what he saw. 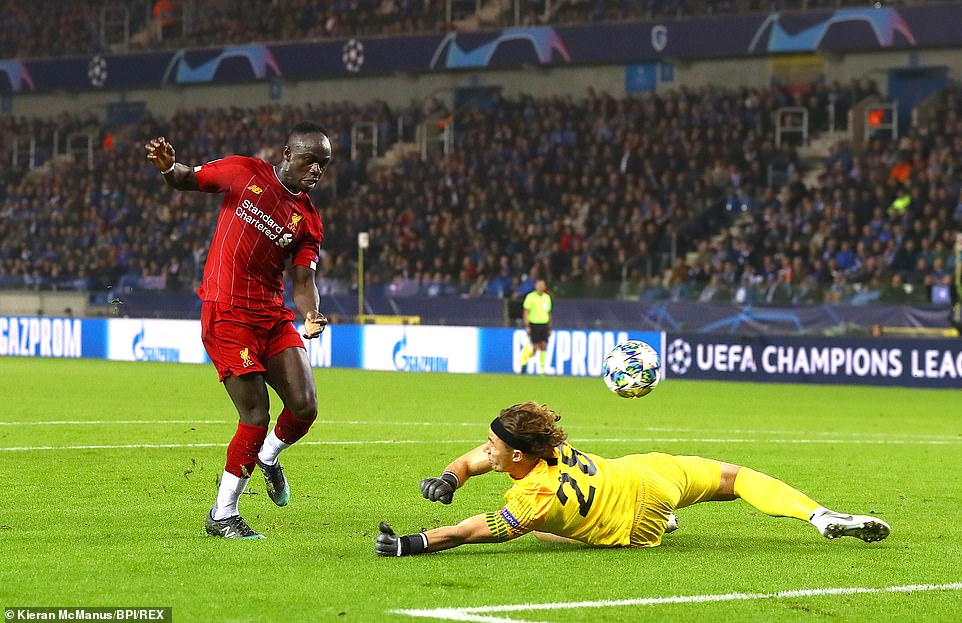 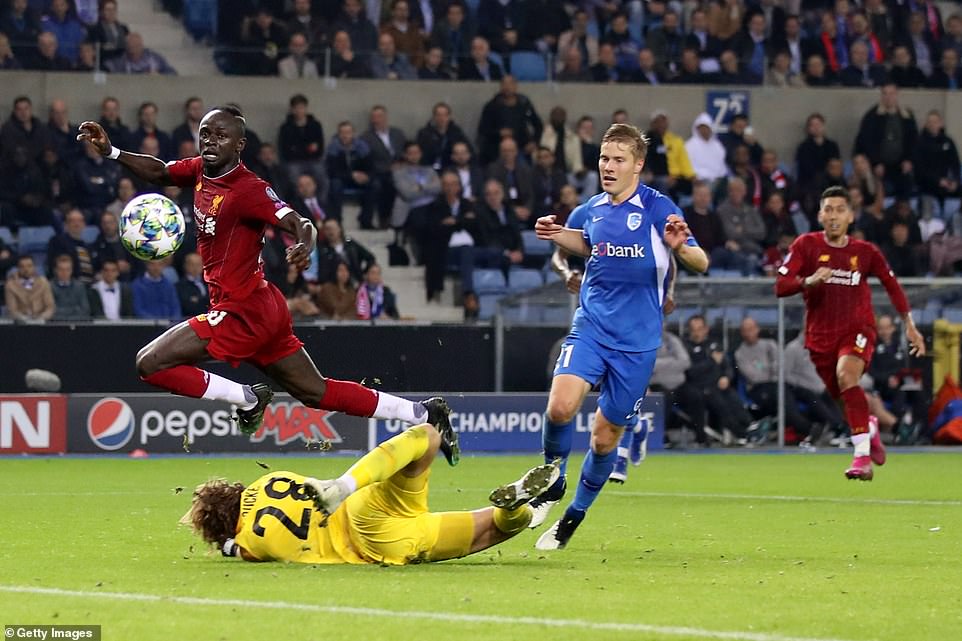 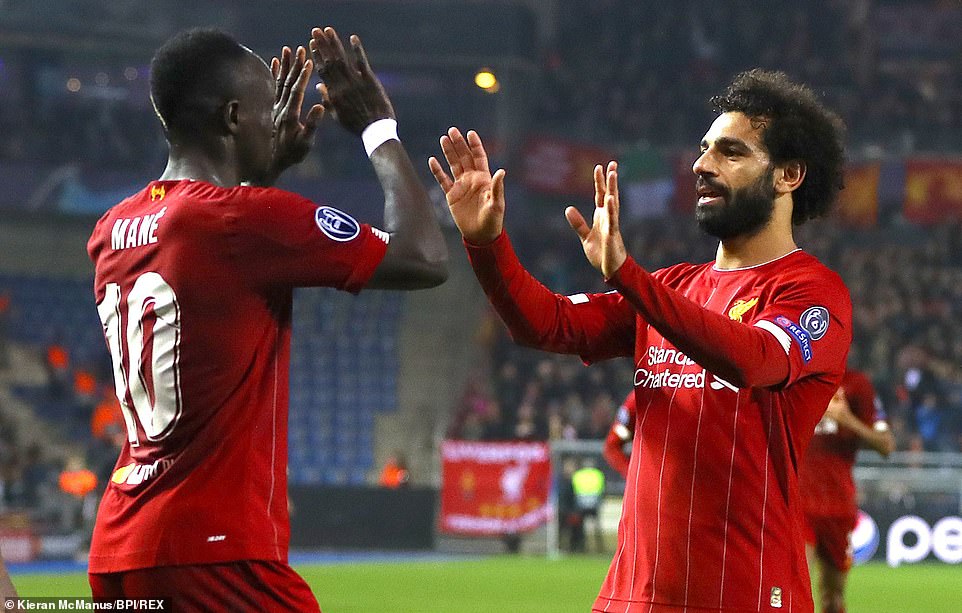 Despite suggestions that Mohamed Salah (right) doesn’t assist Mane (left), it was the Egyptian winger that put him through 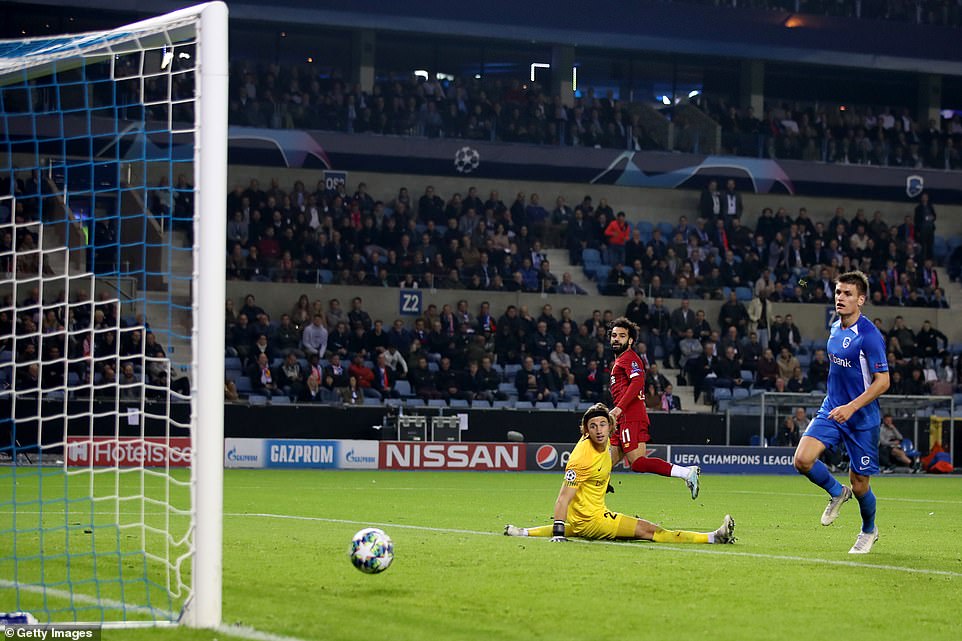 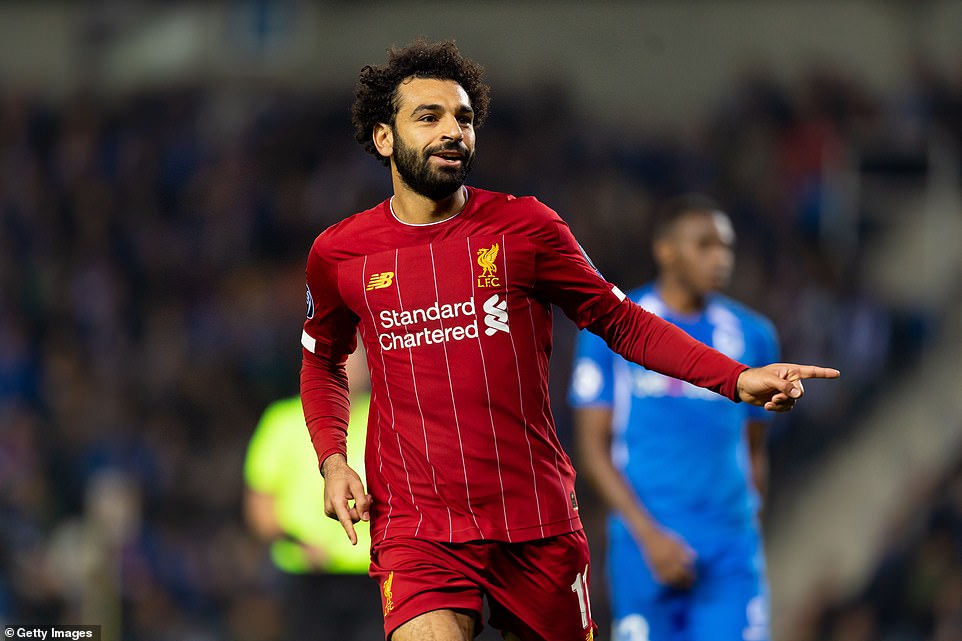 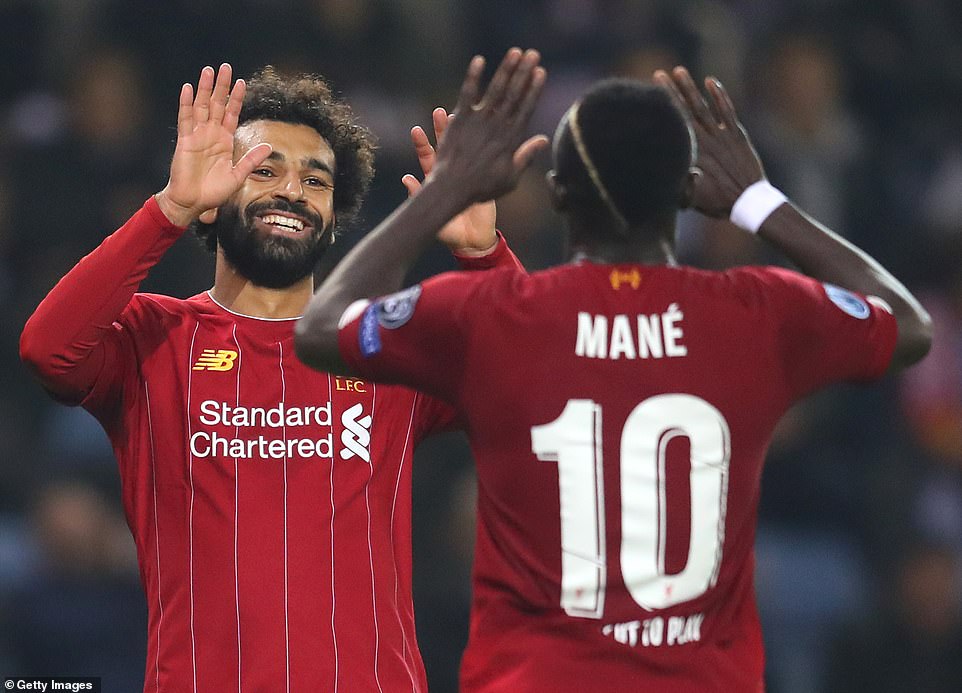 Klopp chuntered to himself, clasped his hands to his head in exasperation. He barked and he pointed and he was agitated to the point that he could not keep still. Liverpool were not sticking to their conductor’s plan in a fixture that had huge significance for Group E.

Enter Oxlade-Chamberlain. He had already provided the game’s best moment, with the opening goal, but better was to come. When Firmino’s lay-off rolled towards him at the perfect speed, Oxlade-Chamberlain did not hesitate and gave the Brazilian another Champions League assist.

Without breaking stride, the midfielder flicked a chip from 20 yards that was so precise it clipped the underside of the bar before bouncing into the net. It was wonderful, the kind of impudence he has always had in his locker.

‘An absolutely great moment for him,’ Klopp enthused.

Oxlade-Chamberlain has been crying out for a game such as this, one that he left his fingerprints all over. The story of his road back to fitness from a horrifying knee injury has been well told but, even still, you cannot underestimate what this picture book moment will have done for his confidence.

Klopp, understandably, wrapped him in a hug when he decided Oxlade-Chamberlain had done enough for the evening. The game was won by that juncture and Liverpool were in control of Group E but, when he reviews the footage, he will see there is much to improve.

The irony is Klopp could not have wished for a better start. With just 111 seconds on the clock, his side had raced into the lead thanks to Oxlade-Chamberlain’s first goal in this competition since his howitzer in the first leg of the 2018 quarter-final against Manchester City.

Given the ease in which Oxlade-Chamberlain — who came in for Jordan Henderson on the right-side of midfield — swept his effort past Genk keeper Gaetan Coucke, guiding into the far corner following a lay-off from Fabinho, you anticipated a contest would become a procession. 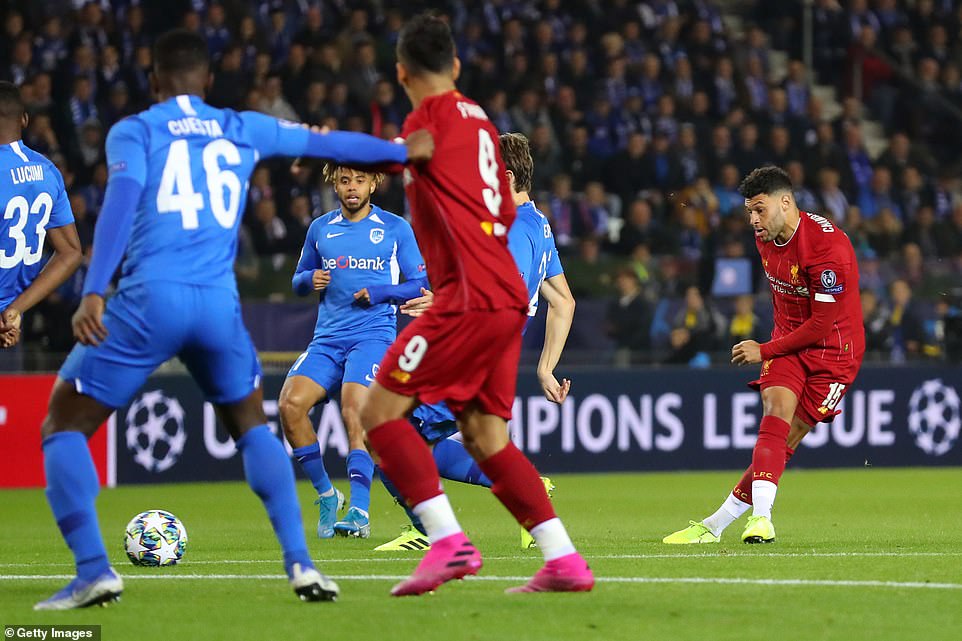 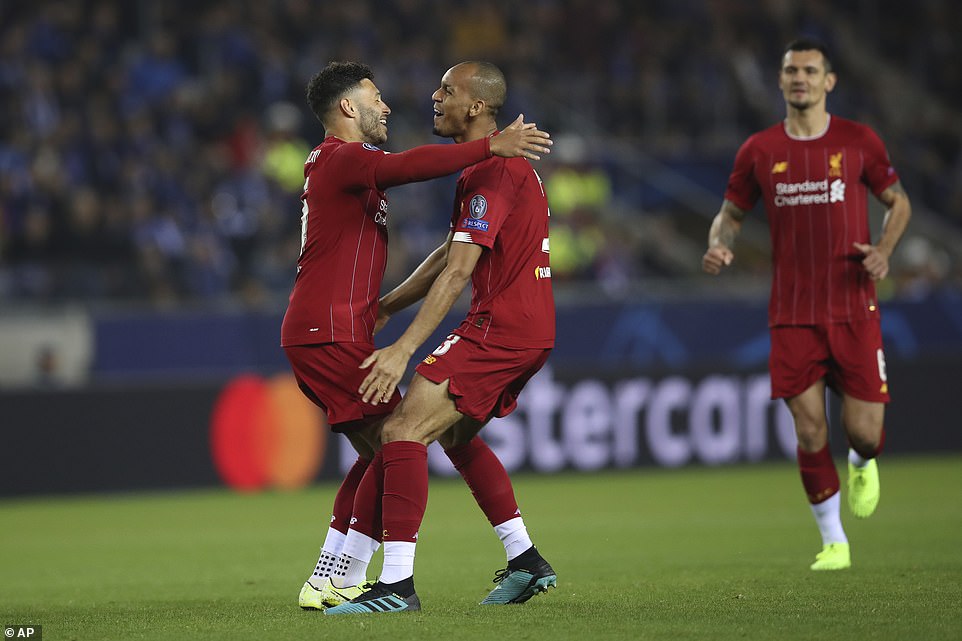 The England international is hugged by team-mate Fabinho (centre, right) before the pair are joined by Dejan Lovren 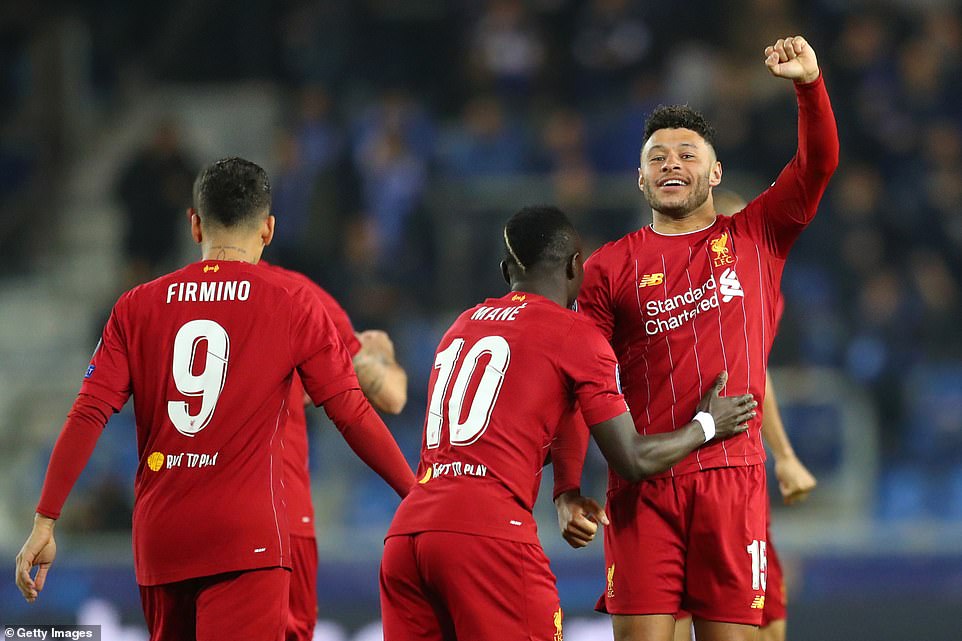 Oxlade-Chamberlain, a hugely popular figure within the dressing room, was immediately engulfed by his team-mates. He is still looking for rhythm following the horrific knee injury that cost him 12 months and every moment such as this will help rebuild his levels.

Surprisingly, though, the expected power surge for his team — where one goal became two then three and possibly more — failed to arrive. If anything, Liverpool took backward steps and they kept offering Genk opportunities to get back into the game.

Really, they could have been pegged back in the fourth minute. Half of Liverpool’s team were left marooned in Genk’s penalty area when the hosts sprung a counterattack that concluded with Ally Samatta, their captain, dragging a shot wide under pressure from Naby Keita and Andy Robertson.

They came even closer in the 26th minute but, this time, VAR was Genk’s enemy. There was a two-minute delay as the Slovakian officials checked to see why Samatta’s towering header from Junya Ito’s precise cross should be disallowed. It was marginal but aren’t all these calls now? 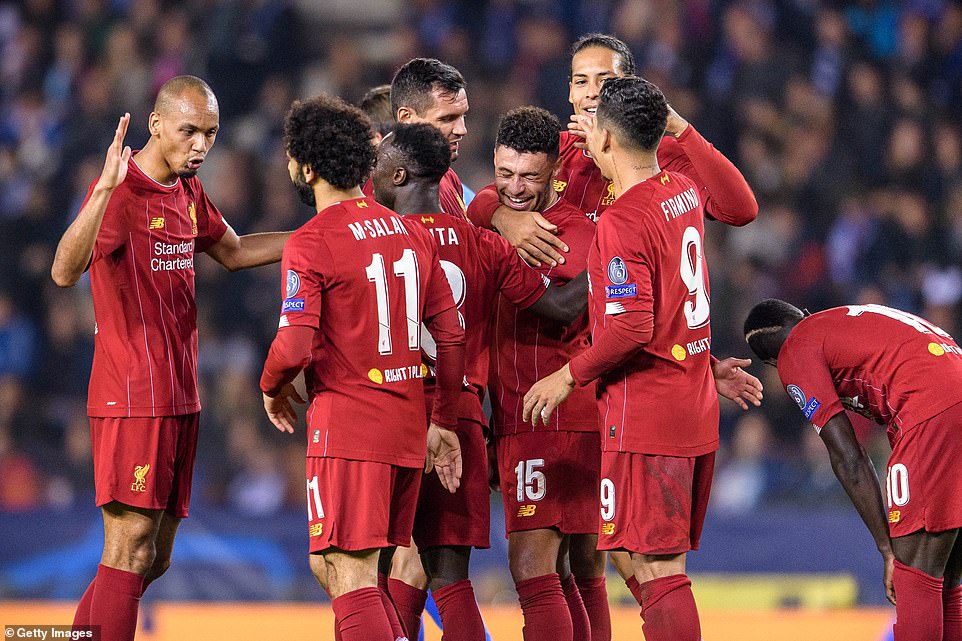 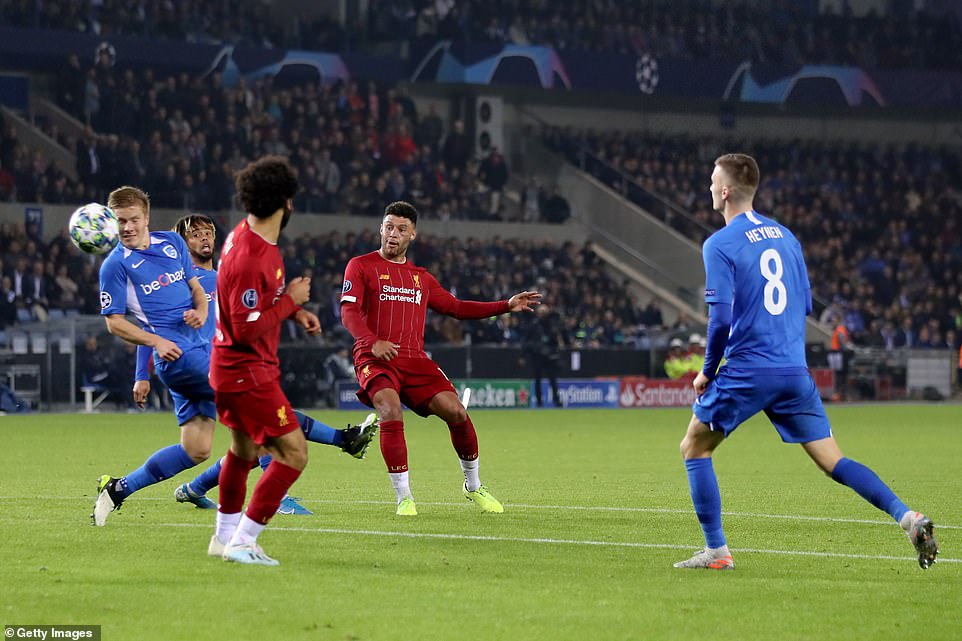 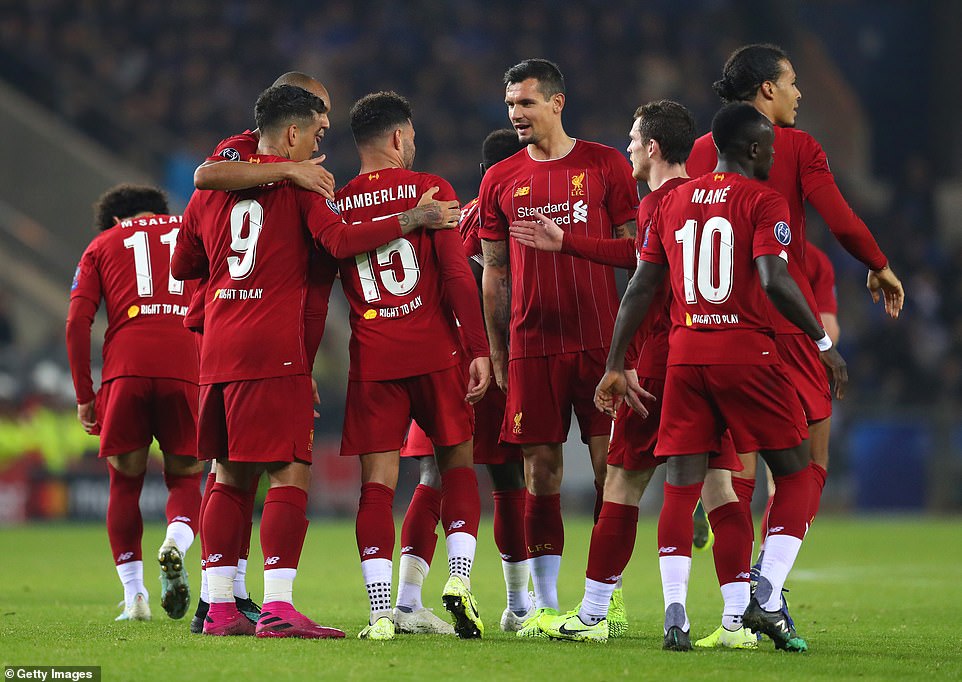 Genk, at that stage, had deserved something for their efforts. Liverpool were loose and sloppy, erratic in possession and the usual cohesion in their defence was out of sync; too many players wanted to get forward too often and it was making life uncomfortable.

Fortunately for Klopp, Genk ran out of steam. Liverpool were far more disciplined in the second half and played with the wisdom you would associate of a team that has reached the last two finals of this tournament. They must have been better as Klopp returned to the dugout for long spells.

‘It was completely unnecessary what we had done,’ said Klopp. ‘We showed them some things at half-time and the spaces to play in. We got the job done.’

Once Oxlade-Chamberlain broke Genk’s resistance, there was never any doubt about the outcome and, eventually, they bolstered their goal difference thanks to strikes from Sadio Mane and Mohamed Salah — much-needed for him — but it was not all smooth.

Any chance of Klopp finishing with a smile, however, was eliminated when Genk substitute Stephen Odey pilfered a late consolation. The defending was erratic and it Klopp greeted it by stretching out his arms in dismay. He’s a hard man to please. 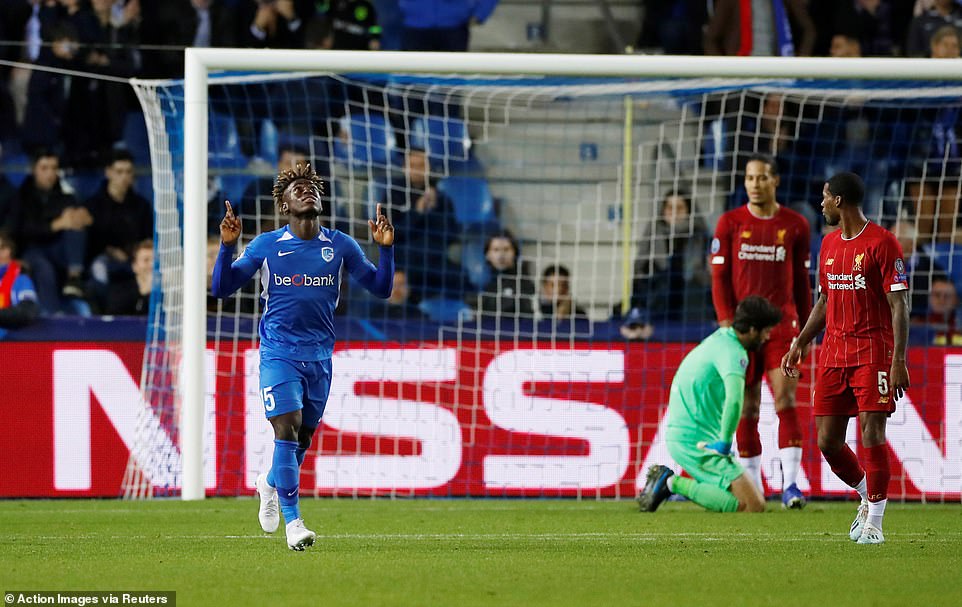 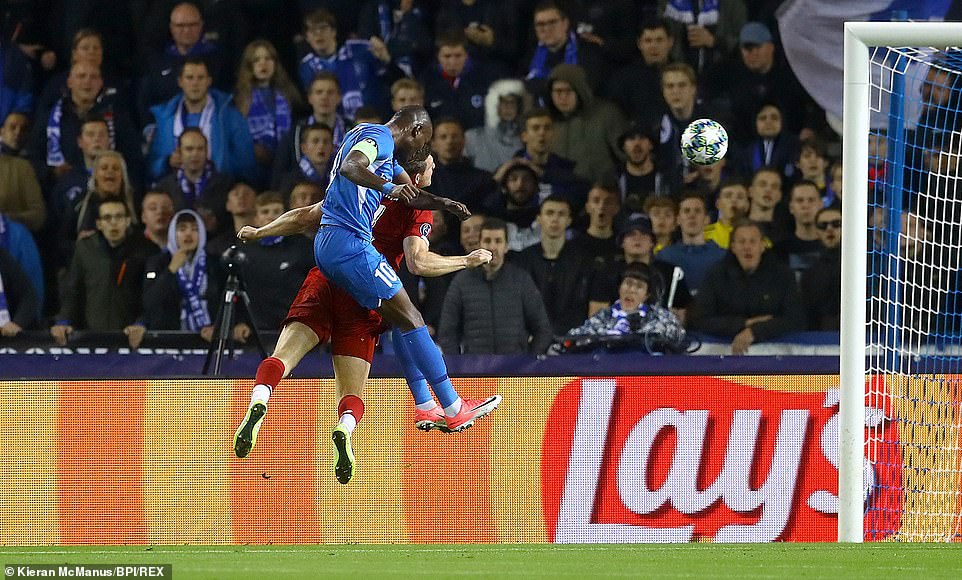 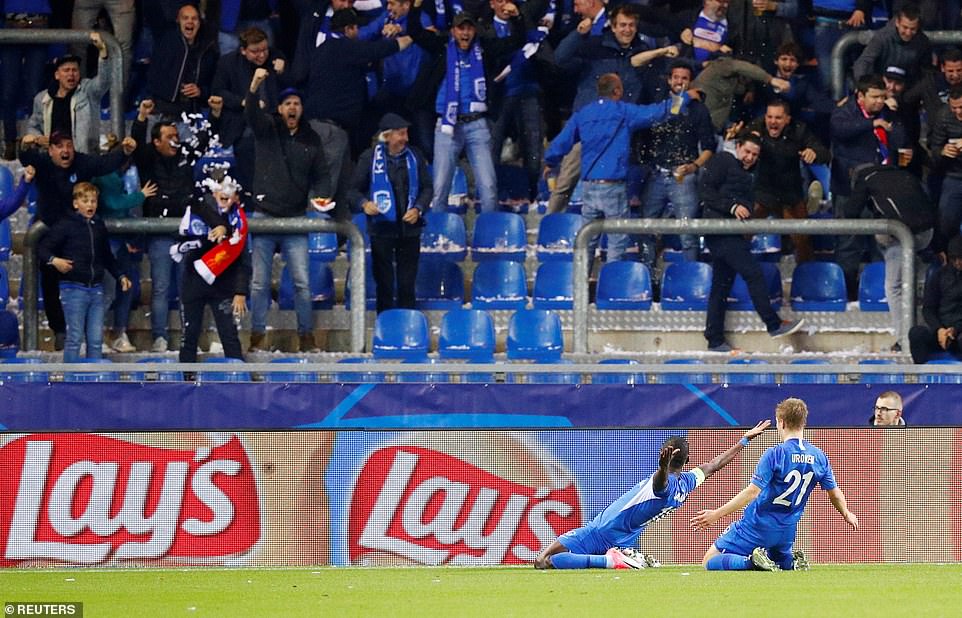 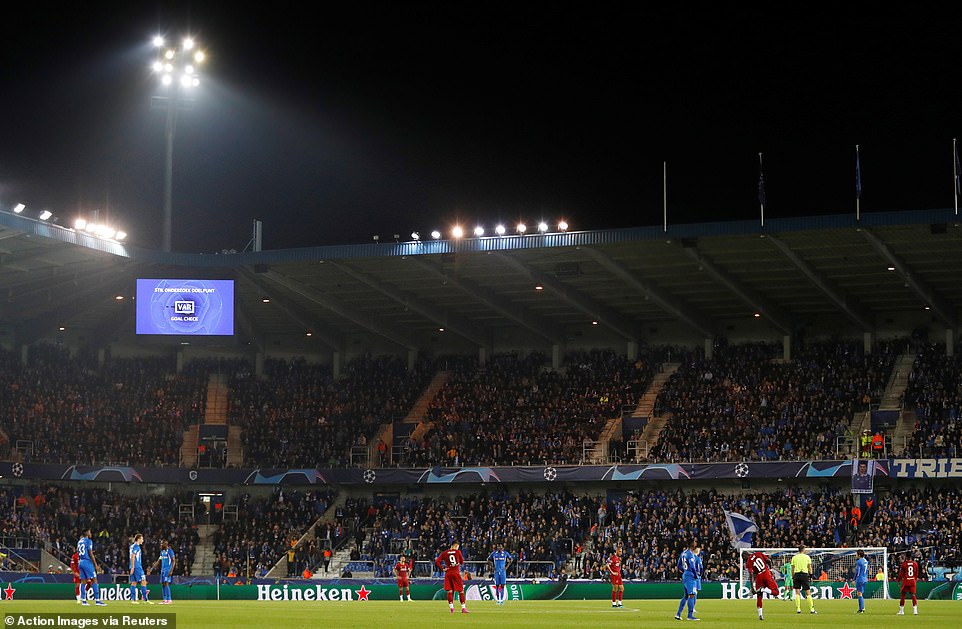 However, Samatta’s header was ruled out by VAR after Genk’s Ito was deemed to be in an offside position in the build up 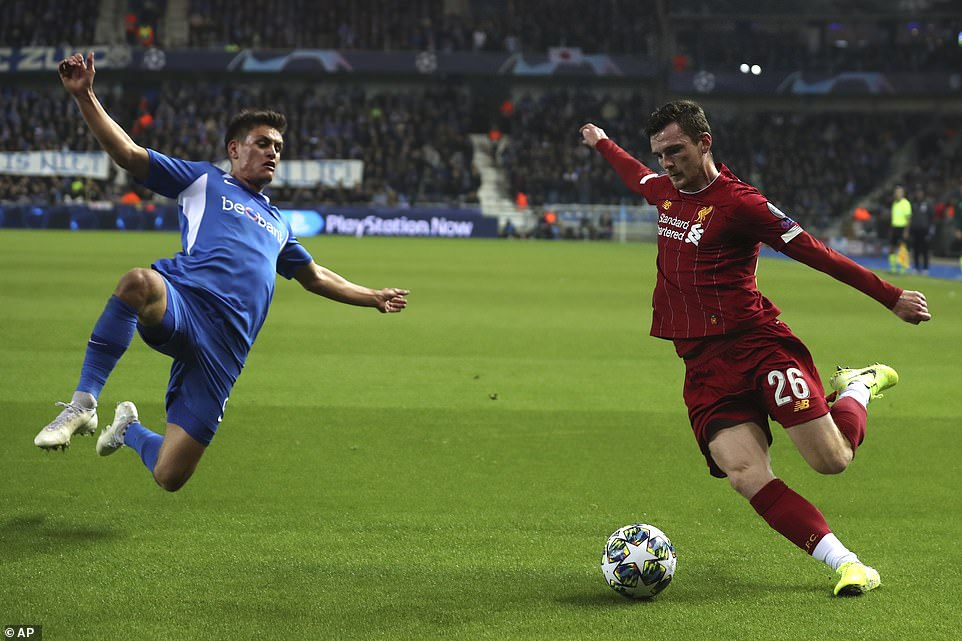 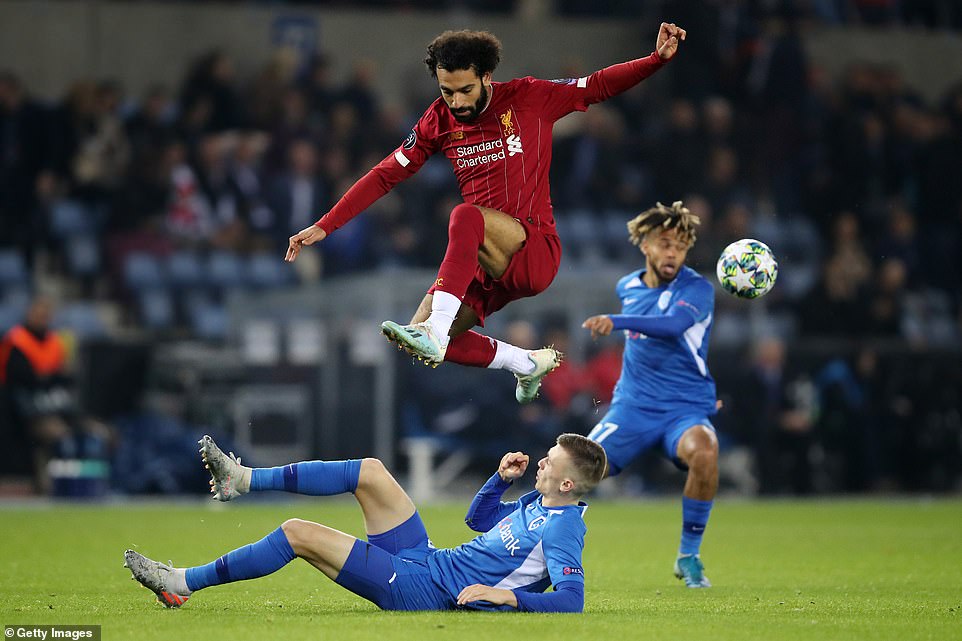