The Attorney General said he was ‘not enthusiastic’ about the prospect but that the question could soon arise of ‘whether there will need to be parliamentary scrutiny of judicial appointments in some manner’.

His comments come after the Supreme Court unanimously ruled yesterday that Boris Johnson’s decision to prorogue Parliament was unlawful.

The remarks by Mr Cox are likely to prompt a furious backlash because the separation of powers and judicial independence are fiercely guarded principles in the UK.

Any attempt to introduce political influence over the appointment of senior judges would be incredibly controversial.

Geoffrey Cox, pictured in Downing Street today, told MPs in the House of Commons that the question of ‘parliamentary scrutiny of judicial appointments’ may well need to be addressed in the coming months and years 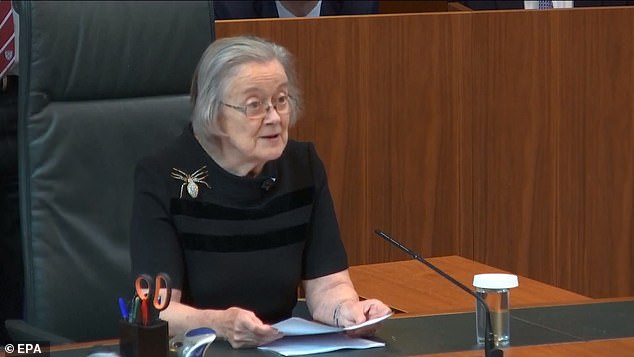 Lady Hale, the President of the Supreme Court, is pictured yesterday as she read out the court’s ruling that the prorogation of Parliament was unlawful

Mr Cox appeared in the House of Commons today to outline the government’s official response to the Supreme Court’s ruling on prorogation.

He was asked by Tory MP John Stevenson if he believed ‘that the appointment of Supreme Court judges should receive the formal approval of Parliament?’

Mr Cox replied: ‘I understand the question and I say to you, quite frankly, I think that is a matter which this House in the coming months and years may need to reflect upon depending upon how the constitutional arrangements… because I do think that we are going to have to look again at our constitutional arrangements, and we should see if we can find some common ground on that.

‘We need to have a proper consideration of it. As we leave the European Union, a great gap opens up, where we take away from legal integration all of this European Union law, and we need to think about the implications of that.

‘So I agree that one matter may very well be whether there will need to be parliamentary scrutiny of judicial appointments in some manner.

‘I have to say that I am not enthusiastic about it, but I understand why you ask.’

The UK’s current system for appointing justices to the Supreme Court involves the Lord Chancellor convening an independent selection commission chaired by the current president of the court.

The selection commission invites applications from judges with enough experience and consults widely on who should be given the role.

The Lord Chancellor is a member of the Cabinet but one of the key functions of their job is to protect the independence of the courts.

There is no parliamentary oversight of the existing process.

In the US, Supreme Court justices are nominated by the president and then confirmed by the US Senate in a process which is increasingly political and often results in major rows.