Geoffrey Cox is the high-flying barrister with the booming baritone voice drafted in to help Theresa May out of a Brexit crisis – only to torpedo both her attempts to get a deal through Parliament.

The 58-year-old Attorney General’s rise from political obscurity in the heart of the south west to a key role in shaping the UK’s departure from the EU has been somewhat meteoric.

The married father-of-three has represented the sparsely populated farming constituency of Torridge and West Devon since 2005 but was only raised to to the Government’s top legal post in July.

Prior to that he was best known for being the UK’s richest MP thanks to his almost four-decade legal career, which saw him act in some massive and long-running cases as well as representing his constituents. 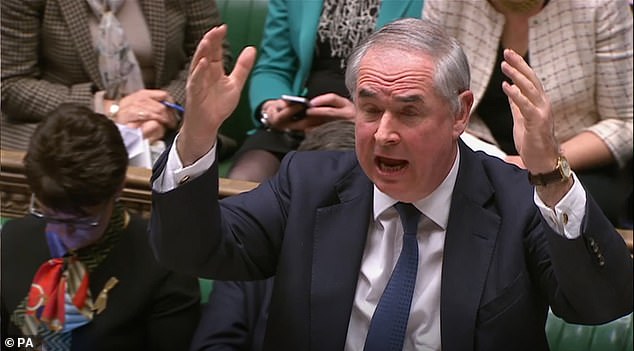 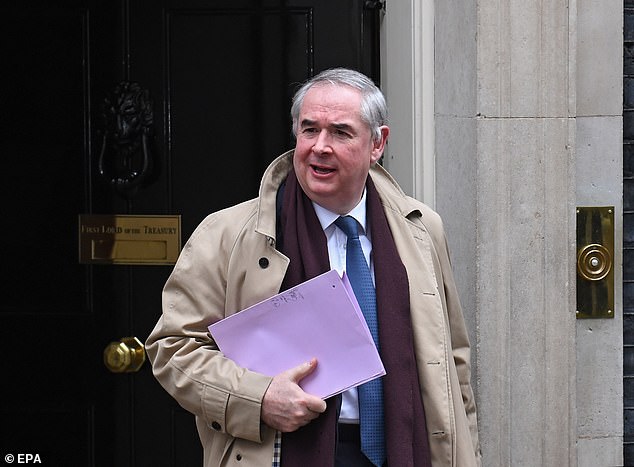 Mr Cox’s impact as the mac-wearing Attorney General, following the low-key tenure of his predecessor Jeremy Wright, has been huge and central to the ongoing Brexit drama

He reportedly halted a career earning him more than half a million pounds a year on joining the Government last year.

But his impact as the mac-wearing Attorney General, following the low-key tenure of his predecessor Jeremy Wright, has been huge.

His legal advice to the Prime Minister on the Withdrawal Agreement and amendments has been pivotal in shaping support and opposition to it.

His ruling today that the 11th hour deal struck in Strasbourg last night failed to reverse his legal advice that Britain could be locked into EU rules forever through the Irish border backstop, meant that the DUP and hardline Brexiteer Tories would not back it.

Mr Cox is from a old Devon family and lives near Tavistock with his wife Jeanie. They have a daughter, Charlotte, and sons James and Jonathan.

But he only really leapt into the political consciousness with his speech at the 2018 Conservative Party.

His delivery, honed by years of delivering hard-hitting and often persuasive arguments in the country’s most senior country, saw him stand out a mile from the drab, unimaginative risk-averse political discourse that has dominated the landscape throughout the Brexit years.

He was sent on stage to be the warm-up act for Theresa May ahead of her crunch speech to party activists.

And he won over the audience as his booming Shakespearean voice and flamboyant manner sent Twitter into meltdown, extolling the possibilities that lie ahead for Brexit Britain in a voice reminiscent of Brian Blessed.

This transferred itself to the Commons, even if sometime he does not appear to know when to stop.

He came up with what became the Cox Codicil, a document attached to the Withdrawal Agreement that would make clearer how the backstop would work – and how the UK could leave it if necessary.

Last week, he described this by its off-the-cuff nickname of ‘Cox’s codpiece’ – referring to a protective pouch used to cover a man’s genitals.

Speaking in a Commons debate, Mr Cox said: ‘It’s come to be called Cox’s codpiece. What I am concerned to ensure is that what’s inside the codpiece is in full working order.’

But even as his Shakespearean delivery won him support among Westminster watchers starved by a thin diet of Theresa May’s ‘nothing has changed’ rhetorical gruel, it did not go down well as he attempted to win over the EU.

While there are a host of old-fashioned posh English barriers in the UK’s top courts he came across as arrogant, ruffling feathers at the talks came to the crunch.

Sabine Weyand, the EU’s deputy chief negotiator, did also not appreciate it when he reportedly call the senior political operator ‘my dear’.

Somewhat more remarkably for such an old-fashioned 58-year-old father of three, he has shown himself unafraid to unload his views on Twitter.

This morning he gave a one-word response to claims he had told Theresa May her new Brexit deal was not legally valid, describing the suggestion as ‘b*llocks’.

The Attorney General also attracted attention when he posted a tweet with the accidental addendum: ‘Get Outlook for iOS’.

When a Twitter user subsequently suggested he instead get a ‘proofreader for tweets’, Mr Cox replied: ‘Good idea.’ 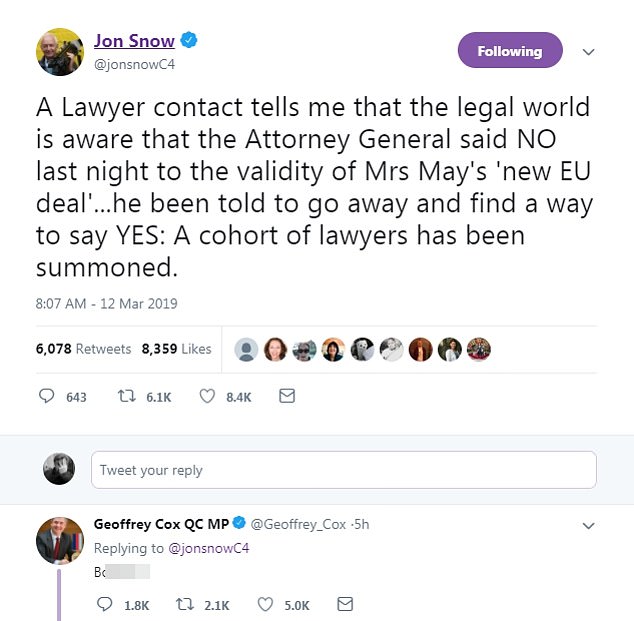 Before entering Government Mr Cox was a colorful character away from the public eye as well.

Reporters ringing him for a comment on a story involving his constituency would often miss him but be treated to his answerphone message, in which he intoned his apologies for not taking the call as Big Ben went ‘bong’ in the background.

But his earlier political career was not without controversy.

As a supremely well-off backbencher he showed his eye for the minutiae of his work when, in 2016, he tried – and failed – to claim 49p on expenses for a pint of milk.

Later that year he found himself in political hot water when he was forced by the standards watchdog to apologise to the Commons after forgetting to declare £400,000 of earnings.

He had referred himself to the Standards Committee the previous October, saying he had forgotten to make the declaration because he had been working in Mauritius and ‘failed to give this matter the due thought and priority it required’.