Concerned Cabinet ministers are bracing for Boris Johnson to wield the axe at a long-anticipated reshuffle tomorrow as Geoffrey Cox urged the Prime Minister not to sack him as Attorney General.

Downing Street confirmed yesterday that the planned shake-up of the PM’s top team will go ahead with a new look Cabinet scheduled to meet on Friday morning.

Mr Johnson is widely expected to get rid of a handful of senior ministers as he looks to promote Tory rising stars and define the direction of his new administration.

Boris Johnson, pictured in Birmingham yesterday, will tomorrow conduct a reshuffle of his Cabinet 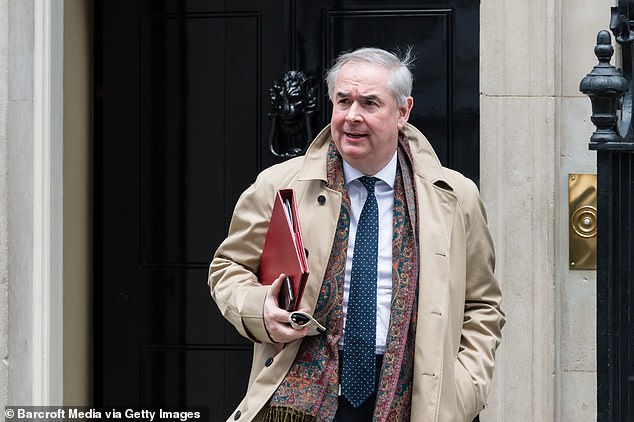 Attorney General Geoffrey Cox, pictured in Downing Street yesterday, has been widely tipped for the sack

Mr Cox is one of a number of ministers who have been widely tipped to be sent back to the Conservative backbenches.

But today he signalled he would like to continue in the role as the government’s chief legal adviser.

Ups and downs: Who is safe, who is for the chop and who is on the up in Cabinet reshuffle tomorrow?

There have been reports that Number 10 does not believe Mr Cox is a ‘team player’ and that he could be replaced by Lucy Frazer QC who is currently a Justice Minister.

Asked this morning if he was concerned that he could lose his job because of an alleged reluctance to engage in party politics, Mr Cox said: ‘It has been an enormous privilege to do this job and the Prime Minister, it is his complete prerogative to decide which team he puts around him.

‘If I were not to be Attorney General shortly then I do not believe it would be for any such reason.

‘You ask me an entirely hypothetical question, the premise of which I don’t accept.’

But asked whether he had had enough of the job, Mr Cox said: ‘Absolutely not.’

If Mr Cox is kicked out of the Cabinet it is thought he could be appointed the chairman of the government’s planned so-called democracy commission which will be tasked with examining the relationship between parliament and the courts.

Nicky Morgan, the Culture Secretary, will almost certainly be removed from the Cabinet with her appointment only ever expected to be a temporary arrangement after she was elevated to the House of Lords.

It is thought Ms Morgan could be replaced by Cabinet Office minister Oliver Dowden.

Nicky Morgan, pictured yesterday in Downing Street, will almost certainly be replaced as Culture Secretary while Andrea Leadsom has been widely tipped to be ousted as Business Secretary

The Telegraph predicted fellow Cabinet Office minister Chloe Smith could be handed a new ‘minister for the Union’ role while Transport Minister Nusrat Ghani is tipped to be given the new minister for HS2 role.

Michael Gove, the Minister for the Cabinet Office who has been Mr Johnson’s Brexit problem solver since he became PM, could be given a beefed up role to handle trade talks with the EU.

Former Brexit Secretary Steve Barclay is also tipped to make a swift Cabinet return while Environment Minister Zac Goldsmith could be appointed president of the COP26 UN climate change summit due to take place in Glasgow in November this year.

Mr Johnson is also expected to ask Northern Powerhouse Minister Jake Berry to attend Cabinet in a sign that he is serious about delivering for voters in the north of England.

The Attorney General has suggested that MPs and peers could scrutinise the appointment of judges to the Supreme Court in a bid to boost transparency.

The Tories pledged at the general election to examine the relationship between the government, Parliament and the courts, and vowed to set up a Constitution, Democracy & Rights Commission within a year to come up with proposals to restore trust in democracy.

Asked about the proposals at an event at the Institute for Government in central London, Mr Cox said: ‘Let me make plain: we’ve no desire to see politically appointed judges – that is completely off the table.

‘There is no question of politicians appointing judges. We have a good system now – the Judicial Appointments Commission – we’re not going to be talking about a party politically appointed set of judges.

‘However, I think there is a case for looking at how Supreme Court judges are appointed.’

He restated his opposition to US-style hearings, but said: ‘In Canada now, for appointments to the Supreme Court, there is a committee of the Canadian Parliament that will carry out interviews.

‘In our country it could be a joint committee of the House of Lords and the House of Commons under clear guidance – there would be rules as to the questions that could be asked.’