At the extreme pressures found at the bottom of the Earth’s outer core, iron assumes a stronger form to cope with the stress in a process called ‘twinning’.

This is the conclusion of a study by researchers from the SLAC National Accelerator Laboratory who recreated the pressures of the core in the laboratory.

They did this by shining two lasers at a sample of iron the width of a human hair. The first created a shock wave that fleetingly heated and compressed the metal.

The second laser — part of SLAC’s Linac Coherent Light Source — enabled the team to probe the effect on the atomic structure of the iron within a billionth of a second.

At the extreme pressures found at the bottom of the Earth’s outer core (shown in the above artistic cutaway), iron assumes a stronger form to cope with the stress in a process called ‘twinning’. This is the conclusion of a study by researchers from the SLAC National Accelerator Laboratory who recreated the pressures of the core in the laboratory

Much of the iron you might encounter out and about — whether for example in buildings, machinery, Victorian lampposts, etc. — has a structure that crystallographers would refer to as ‘body-centred cubic’.

This means that the crystal lattice is arranged into a pattern of nanoscopic cubes, with iron atoms at each cube’s centre, as well as each of the eight corners.

When iron is subjected to higher pressures, however, this structure changes — taking, above 10 gigapascals, a hexagonal form that allows the atoms to pack together more closely.

In their study, paper author and geologist Arianna Gleason of SLAC and her colleagues wanted to see what would happen to the hexagonal close-packed form of iron if you continued to pile on the pressure up to that found in the Earth core.

‘We didn’t quite make inner core conditions, but we achieved the conditions of the outer core of the planet — which is really remarkable,’ said Professor Gleason.

The team were unsure how iron would respond to such extreme conditions — equivalent to some 360 million times the pressure at the Earth’s surface and as hot as surface of the Sun — as no-one has previously been able to observe such.

It turns out that iron undergoes another structural transition, much like the one from a cubic to a hexagonal form it experiences at much lower pressures.

‘As we continue to push it, the iron doesn’t know what to do with this extra stress,’ Professor Gleason explained.

She continued: ‘It needs to relieve that stress, so it tries to find the most efficient mechanism to do that.’

The coping mechanism that iron resorts to — twinning — sees the arrangement of atoms shunted to the side, rotating all the hexagonal prisms by nearly 90 degrees.

Twinning is a common pressure response in various minerals and metals, including calcite, quartz, titanium and zirconium.

‘Twinning allows iron to be incredibly strong — stronger than we first thought — before it starts to flow plastically on much longer time scales [than it would have otherwise,’ Professor Gleason said. 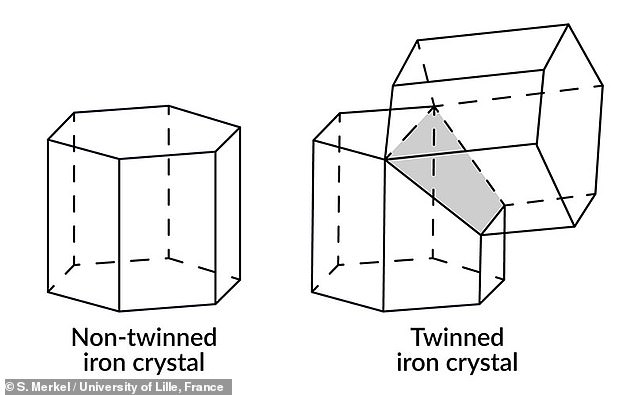 ‘As we continue to push it, the iron doesn’t know what to do with this extra stress,’ Professor Gleason explained. ‘It needs to relieve that stress, so it tries to find the most efficient mechanism to do that.’ The coping mechanism that iron resorts to — twinning — sees the arrangement of atoms shunted to the side, rotating the hexagonal prisms by nearly 90°

‘Now we can give a thumbs up, thumbs down on some of the physics models for really fundamental deformation mechanisms,’ said Professor Gleason.

‘That helps to build up some of the predictive capability we’re lacking for modelling how materials respond at extreme conditions.’

Alongside this, the team explained, the same methods could be applied to better understand how other materials behave under extreme conditions.

Prior to their experiments, the researchers were unsure if iron would respond too fast for them to measure or too slow for them to ever see.

‘The fact that the twinning happens on the time scale that we can measure it as an important result in itself,’ explained paper author and geophysicist Sébastien Merkel of the University of Lille, France. 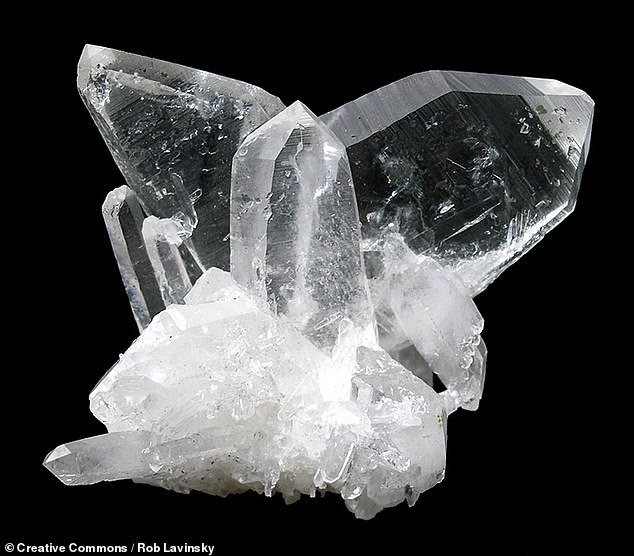 Twinning is a common pressure response in various minerals and metals, including calcite, quartz, titanium and zirconium. Pictured: a twinned crystal of quartz

‘The future is bright now that we’ve developed a way to make these measurements,’ added Professor Gleason, noting as well that recent upgrades to the Linac Coherent Light Source will allow materials to be studied at higher X-ray energies.

This, she explained, will enable studied of ‘thicker alloys and materials that have lower symmetry and more complex X-ray fingerprints’ — while also allowing larger samples to be observed, permitting a more comprehensive look at iron’s behaviour.

Furthermore, Gleason said, ‘we’re going to get more powerful optical lasers with the approval to proceed with a new flagship petawatt laser facility.

‘That’ll make future work even more exciting because we’ll be able to get to the Earth’s inner core conditions without any problem,’ she concluded.

The full findings of the study were published in the journal Physical Review Letters.

Charged metals passing through these fields go on to create electric currents of their own, and so the cycle continues.

This self-sustaining loop is known as the geodynamo.