BBC newsreader George Alagiah has said he is ‘in a sort of limbo’ as he waits to hear the outcome of his latest round of cancer treatment.

The broadcaster, 63, says he is determined to live each day ‘to the full’  after he revealed earlier this year that he was being treated for a recurrence of the illness.

Alagiah, who appeared on The One Show yesterday, said: ‘I’m living with cancer like lots and lots of other people.

‘It keeps coming back and my amazing doctors shove it back into its hole.’

The broadcaster, 63, (pictured) underwent 17 rounds of chemotherapy to treat advanced bowel cancer in 2014, and revealed earlier this year that he was having treatment to deal with a recurrence of his illness

Alagiah, who is among those who have called for earlier screening for the disease, said he had completed some treatment a month ago.

‘The only way I know – and different people deal with cancer in a different way – is to live each day as it comes along and live it to the full.’

The newsreader was on the programme to discuss his debut novel, political thriller The Burning Land, which will be released on August 29.

He said he started it before being diagnosed with cancer but stopped writing it when he became ill. 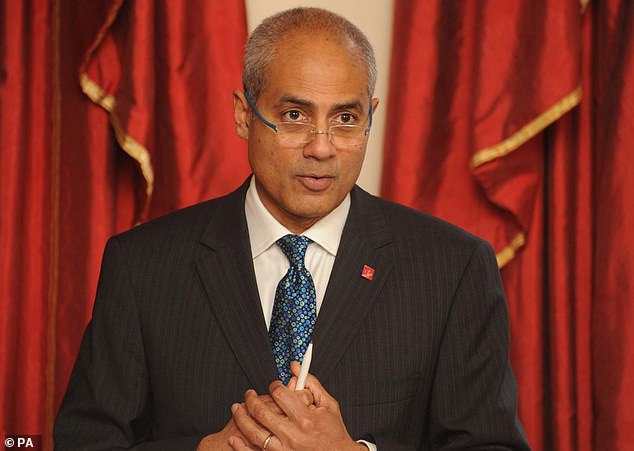 Appearing on The One Show on Monday, Alagiah (pictured in April) said: ‘I’m living with cancer like lots and lots of other people. I’m in a sort of limbo’ 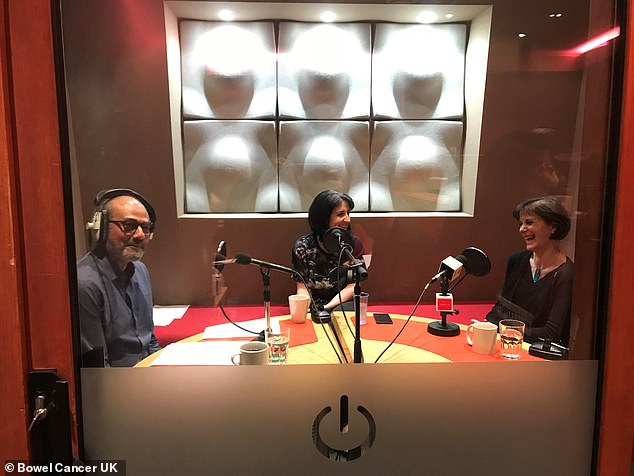 Pictured: The journalist hosting George Alagiah: A Bowel Cancer UK podcast, in which he speaks frankly about the impact it has had on is life

‘Once cancer came, it’s a life-changing situation and I didn’t even think about it,’ he said.

‘But I had a couple of years when it seemed to go away and I picked it up again and then was fortunate enough to have Canongate, my publishers, come and say they really liked it.’

In June Alagiah thanked the public for the ‘tremendous’ support they had showed him since his 2014 diagnosis for bowel cancer, as he revealed the cancer had returned. 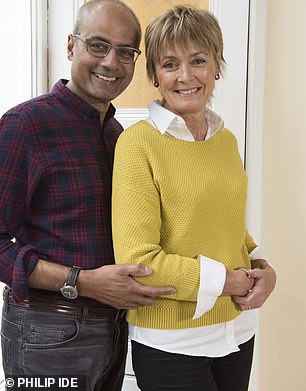 The BBC journalist (pictured with his wife, Fran) has talked openly about how bowel cancer has affected his family and those around him

His agent Mary Greenham said in a statement: ‘George Alagiah will aim to be on-air as much as possible but may need to reduce his workload in the next few weeks as he begins a new regime of treatment to deal with a recent recurrence of his cancer.

‘He is always grateful to the public for the tremendous support he has received.’

Alagiah underwent 17 rounds of chemotherapy to treat advanced bowel cancer in 2014 before returning to presenting duties in 2015, but in January 2018 he revealed that he was struggling once again.

The journalist recently opened up about his Stage 4 diagnosis and how it affected his family and mental health in a new podcast.

Speaking on the George Alagiah: A Bowel Cancer UK podcast, he said in April: ‘Everybody’s got their way of dealing with it, but I had to get to what I now call my place of contentment.

‘Because there was so much thrashing about in my mind, some of it negative, some of it dark.’

George started his journalism career at the BBC in 1989 and became one of the BBC’s leading foreign correspondents, reporting on new stories in Iraq and Afghanistan.

In January this year George presented News at Six for the first time in more than a year this after taking time off to battle cancer. 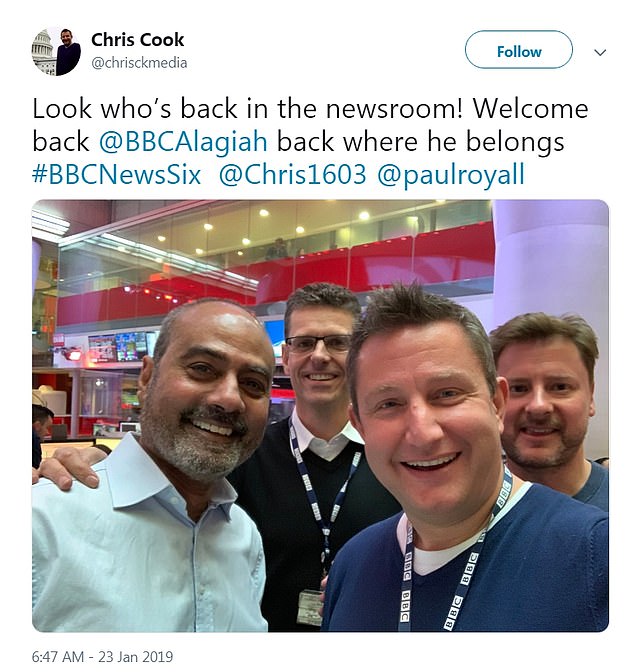 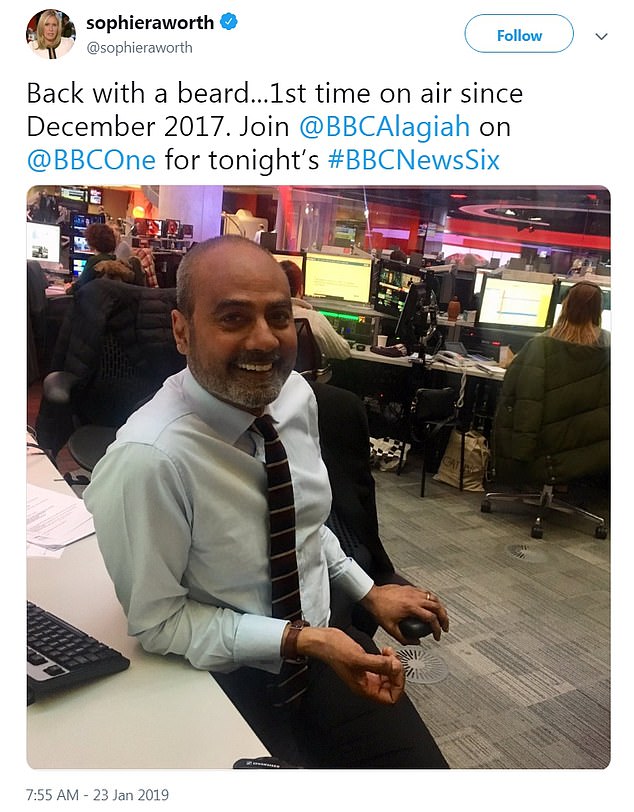 Social media users praised his return as they shared outpourings of support during his first broadcast back on the BBC.

On Twitter, one person said: ‘#bb1 Welcome back dear Geroge Alagiah. Hooray for you. #georgealagiah.’

Another user was happy to see him back and commented on his new appearance, they said: ‘Great to see @georgealagiah back leading BBC news. Love the new look!’

And one more said she was thrilled her ‘favourite newsreader’ was back.

BBC News at 6 programme editor Jonathan Whitaker later shared a photo of Alagiah ‘back in the hot seat’ ahead of the 6pm broadcast.

Speaking last year when he learned the bowel cancer had returned, he said it had been ‘harder for his family.’

He said: ‘My brilliant doctors are determined to get me back to a disease-free state and I know they have the skill to do just that.

‘I learned last time around how important the support of family and friends is and I am blessed in that department.

‘I genuinely feel positive as I prepare for this new challenge.’

He added: ‘Always knew cancer could come back but still tough dealing with disappointment.