George Clooney flashed his classically good looks while attending the premiere of his new directorial project, The Tender Bar, in Los Angeles on Sunday.

And naturally the 60-year-old A-lister was seen with his stunning wife of seven years, Amal Clooney, 43, on his arm who looked a vision in a dress with midriff cutouts.

Also in attendance at the very star studded event were the film’s stars including Ben Affleck, Lily Rabe, Tye Sheridan and Christopher Lloyd, with other big names coming out to see a special viewing of the Amazon Studios picture.

Big night: The Hollywood heartthrob attended the premiere of his latest directorial project, The Tender Bar, at the Director’s Guild in LA alongside wife Amal Clooney

A suit-clad Clooney was seen leading the charge at the event which was held at the Director’s Guild of America in Hollywood.

He was seen posing alongside Amal who looked beautiful in a black and white gown that exposed a hint of her legs, which she paired with elegant crystal adorned heels and a clutch purse.

The couple — who share four-year-old twins Ella and Alexander — looked as close as ever as the wrapped their arms around each other and at one point he beamed at her with pride. 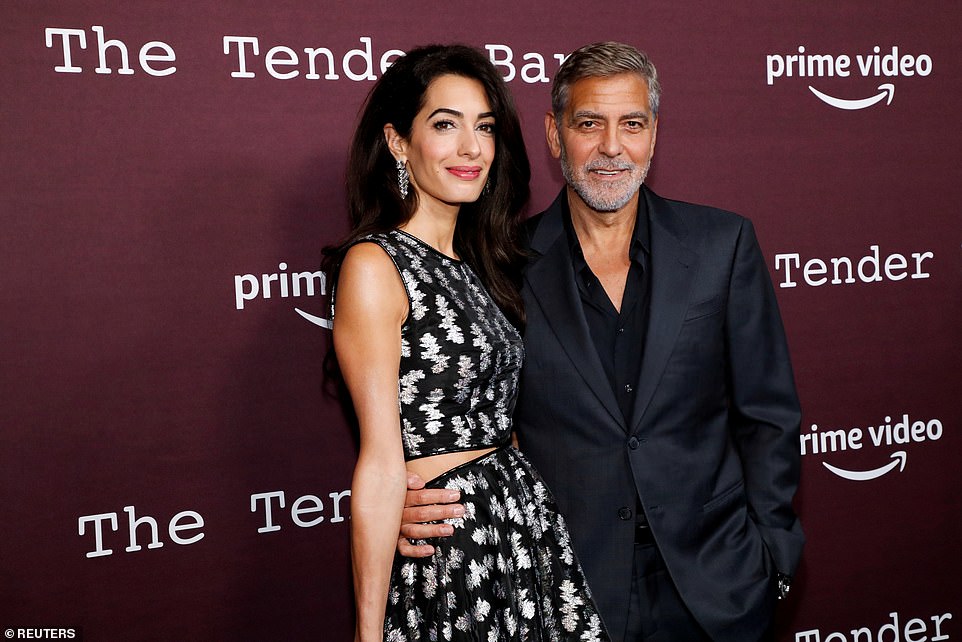 I got you: Clooney, 60, was seen wrapping his arm around Amal, 43, on the red carpet 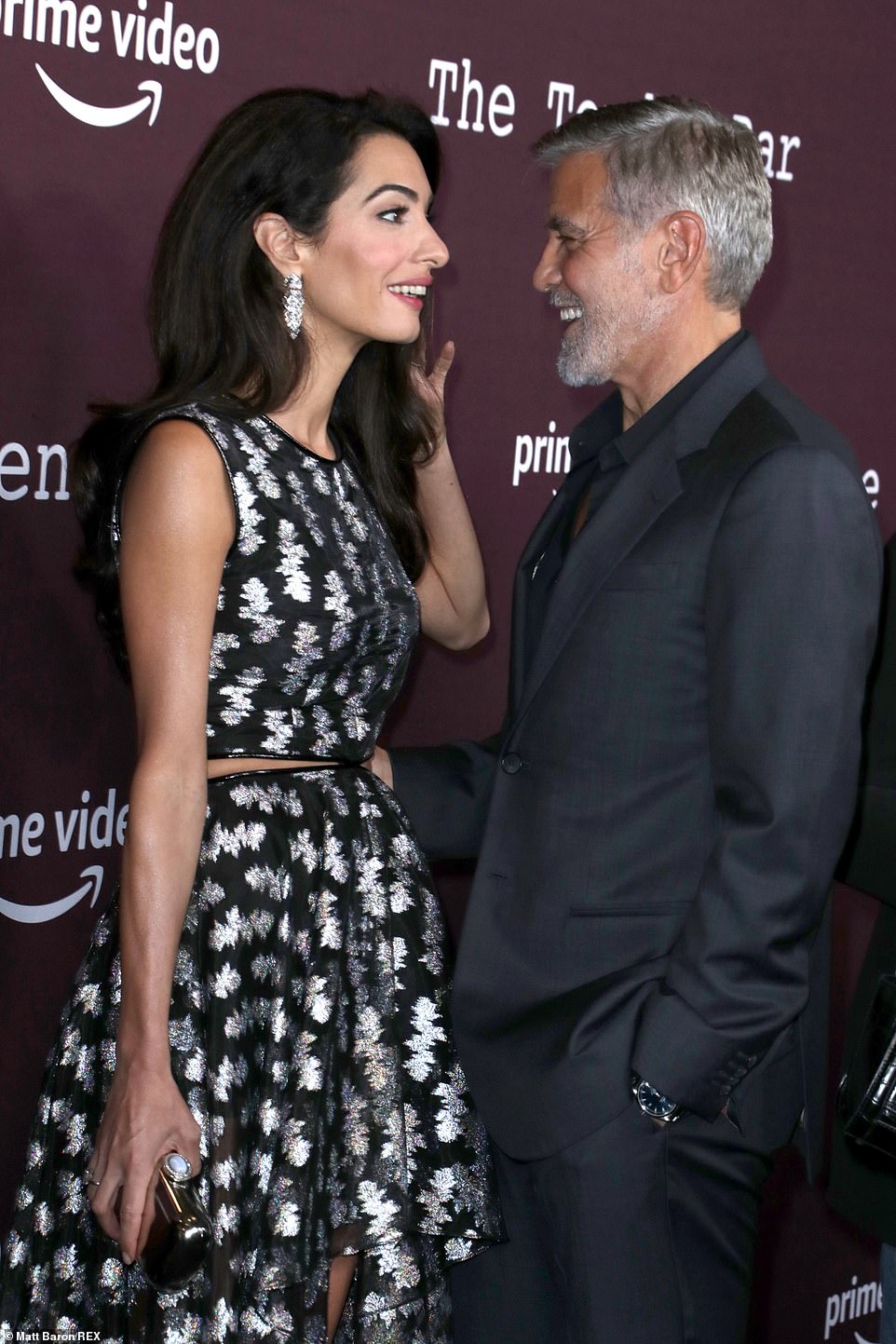 Beaming: The two-time Academy Award winner beamed at his stunning bride with joy as they walked the step and repeat 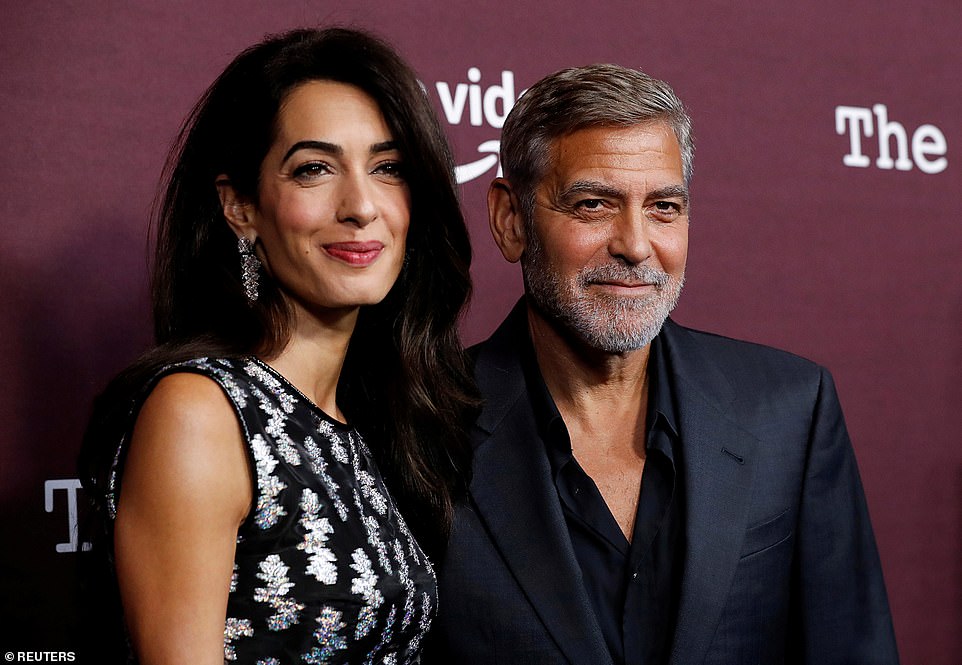 Power couple: Though Clooney continues to be a leading name in Hollywood, Amal stands on her own as a high profile barrister proving to have both beauty and brains

After some pictures with his real-life leading lady, Clooney let loose while walking the step and repeat with good buddy and film star Ben Affleck.

The life-long friends could not contain their elation at the event as they laughed uncontrollably before continuing to show off their goofy side with the full cast. 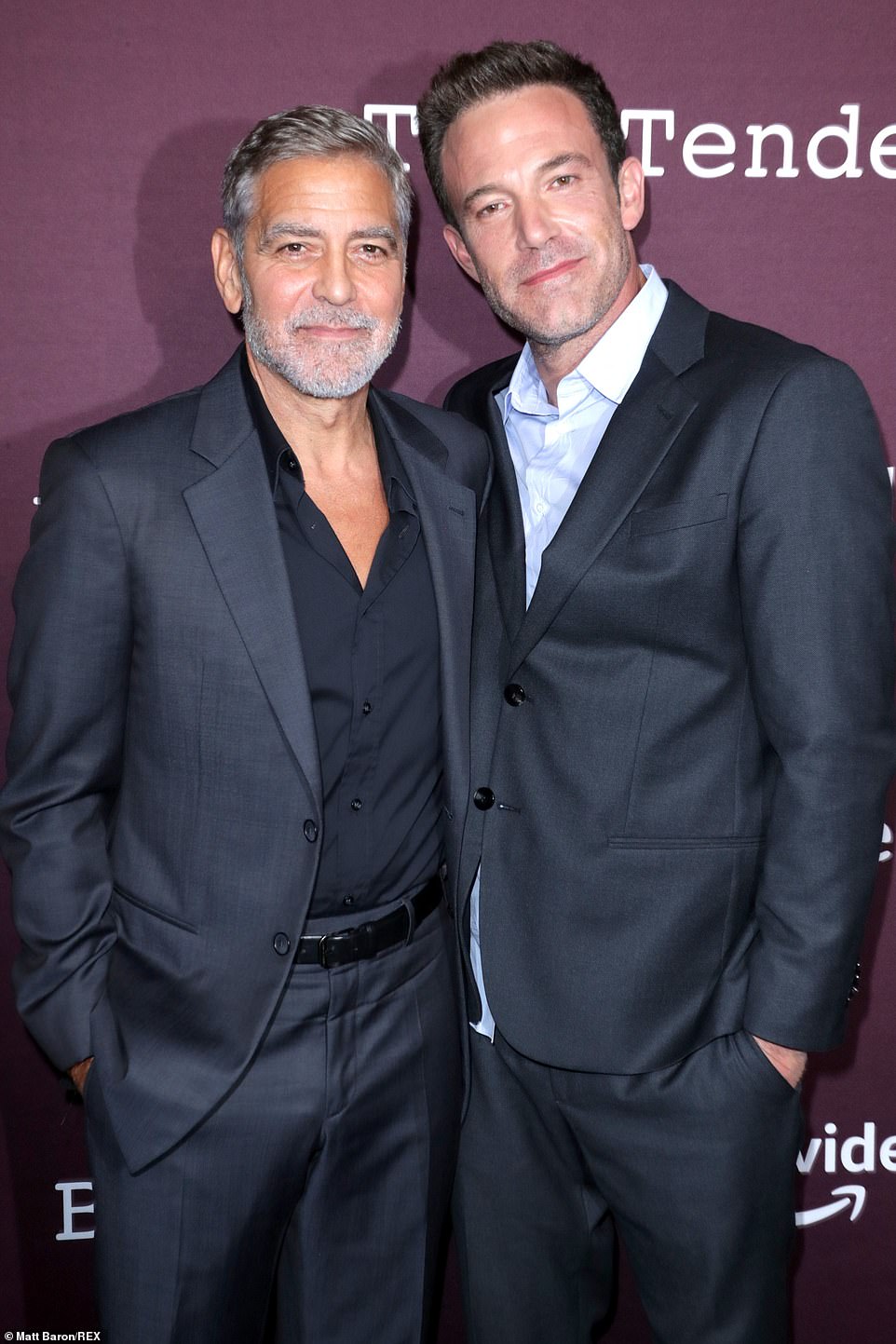 Dapper duo: Clooney (left) was seen buddying up to Affleck (right) who stars in the Amazon film

Collaborators: In the movie Affleck plays the uncle of the protagonist, a character named, J.R. who owns a bar in Long Island 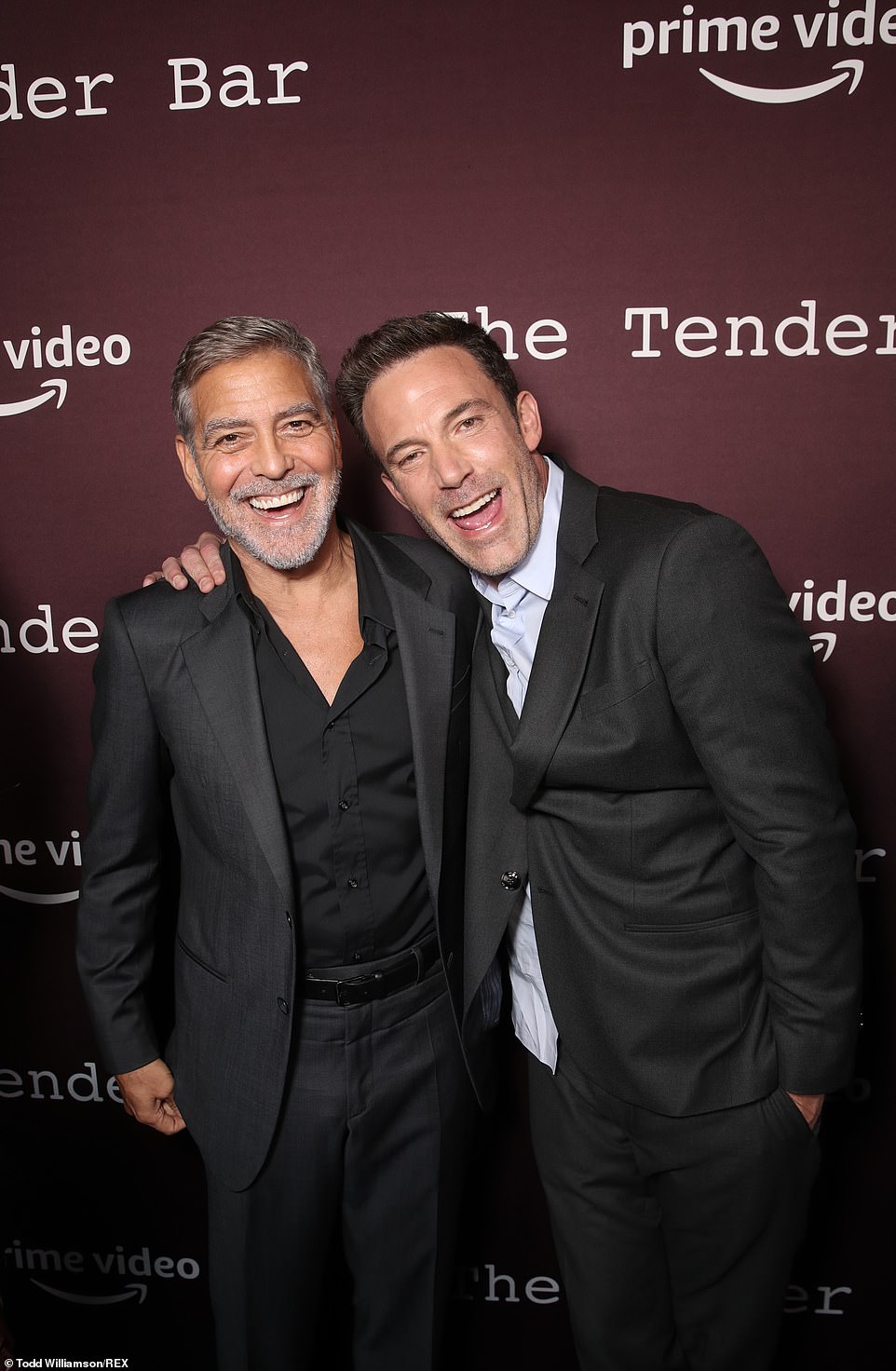 Flying solo: Despite his very high profile romance with Jennifer Lopez, Affleck appeared without her at the event 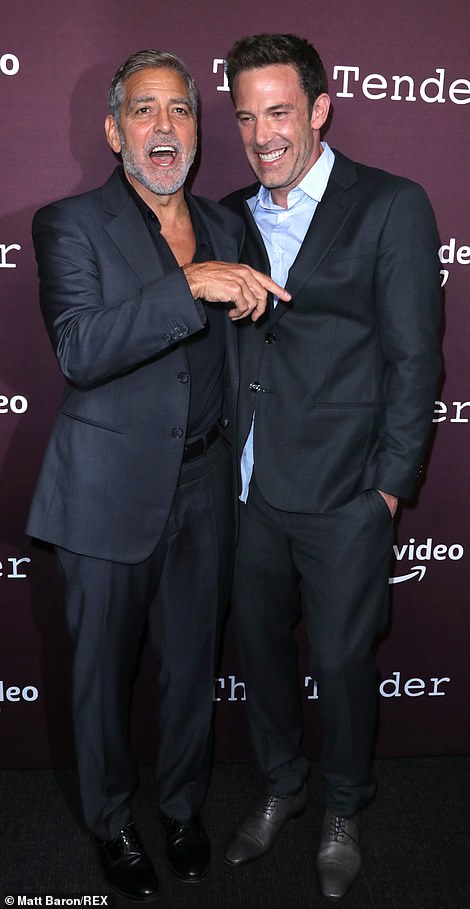 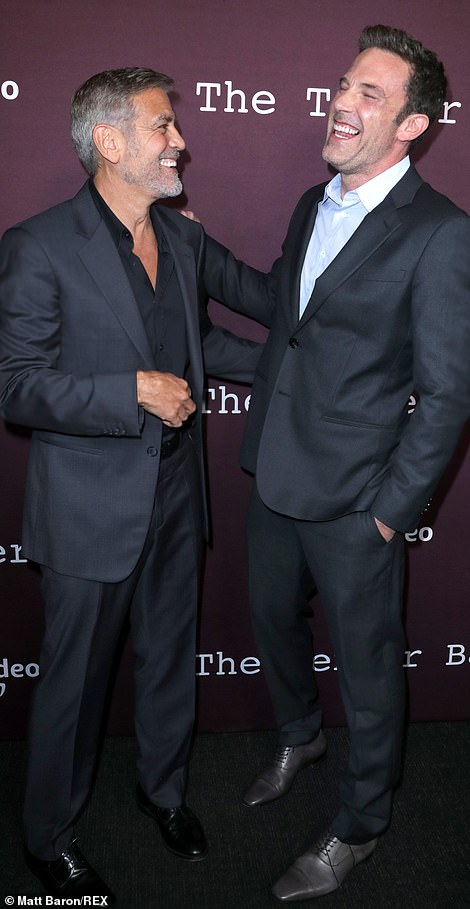 Sharing a laugh: The powerhouses could not contain their laughter and energy at the premiere 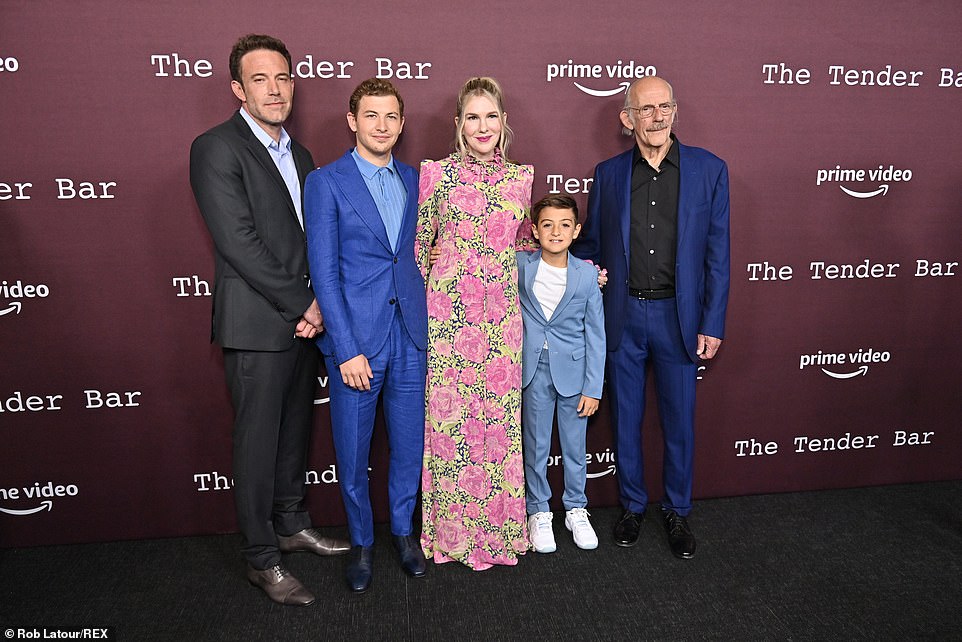 A his mother (played by Lily Rabe) struggles to provide him with opportunities while they continue to reside with her father (played by Christopher Lloyd), J.R. decides to take hold of his future and pursue romantic and professional dreams.

The film is based on J.R. Moehringer’s bestselling memoir of the same name and the screenplay was written by William Monahan, who penned The Departed.

Expecting! Lily Rabe cradled her baby bump as it was revealed she is expecting her third child 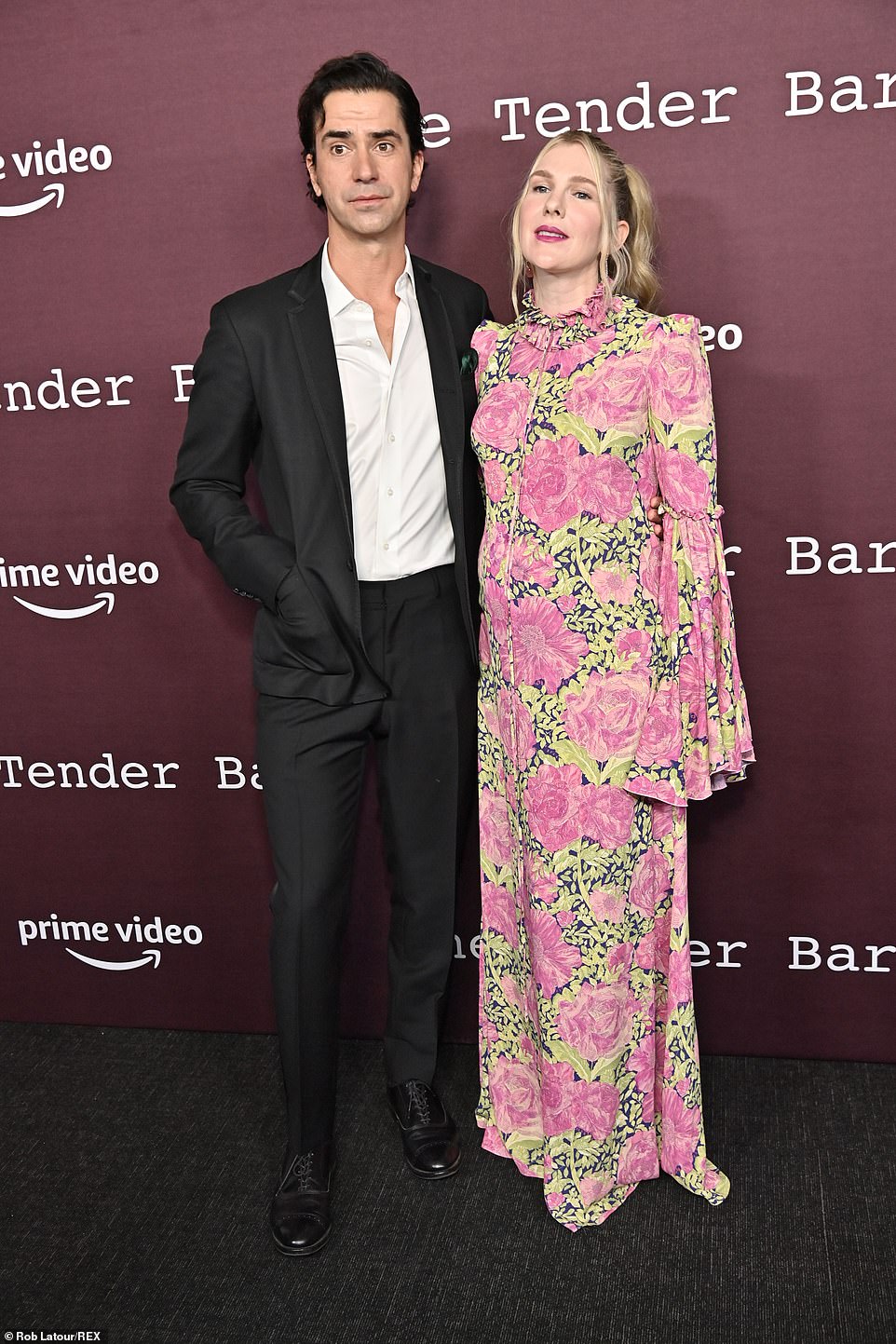 Parents of three: Hamish Linklater and Rabe have been partners since 2013 and most recently welcomed their second child in June 2020 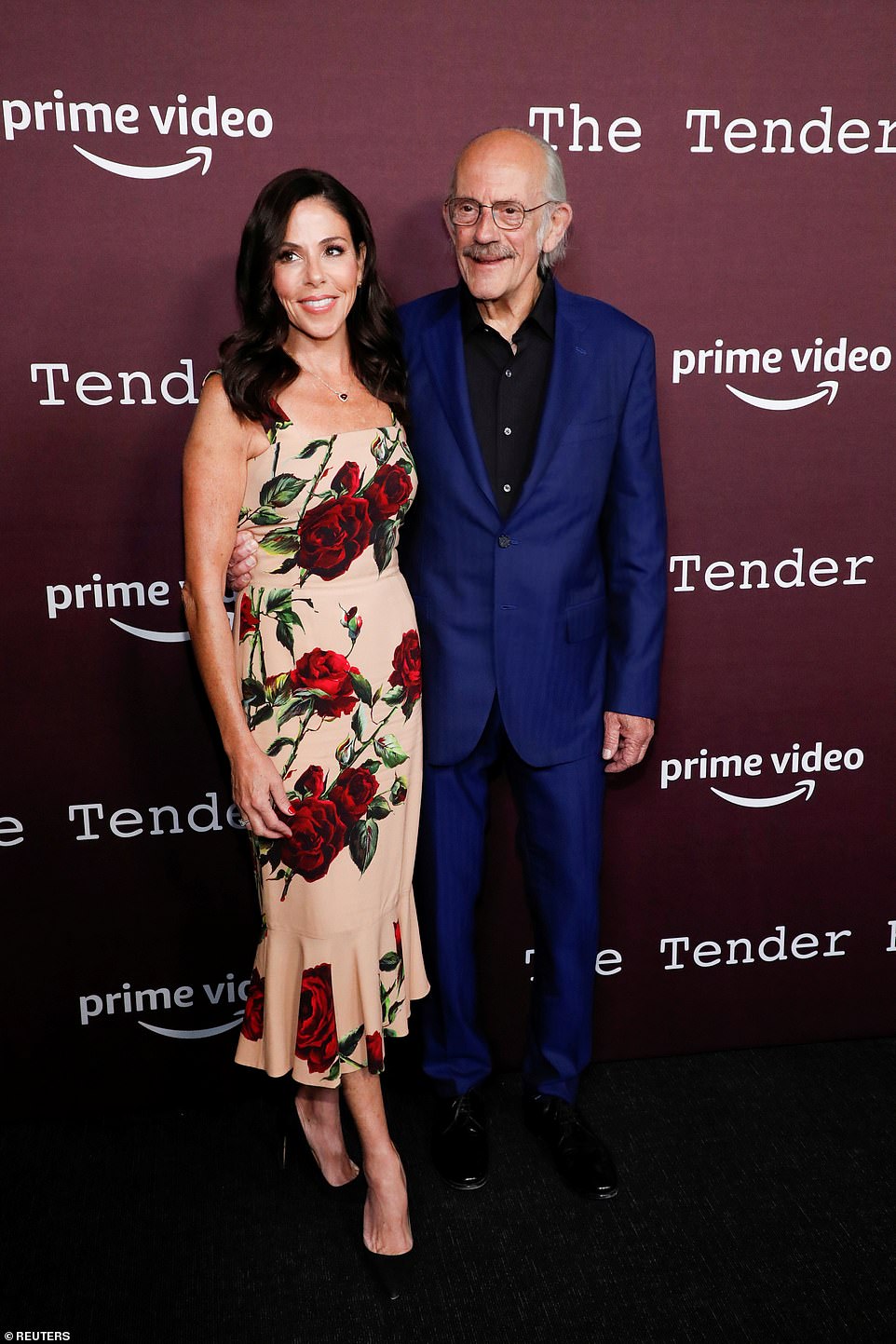 Couple: The Back To The Future vet appeared alongside his wife Lisa Loiacono, a real estate agent 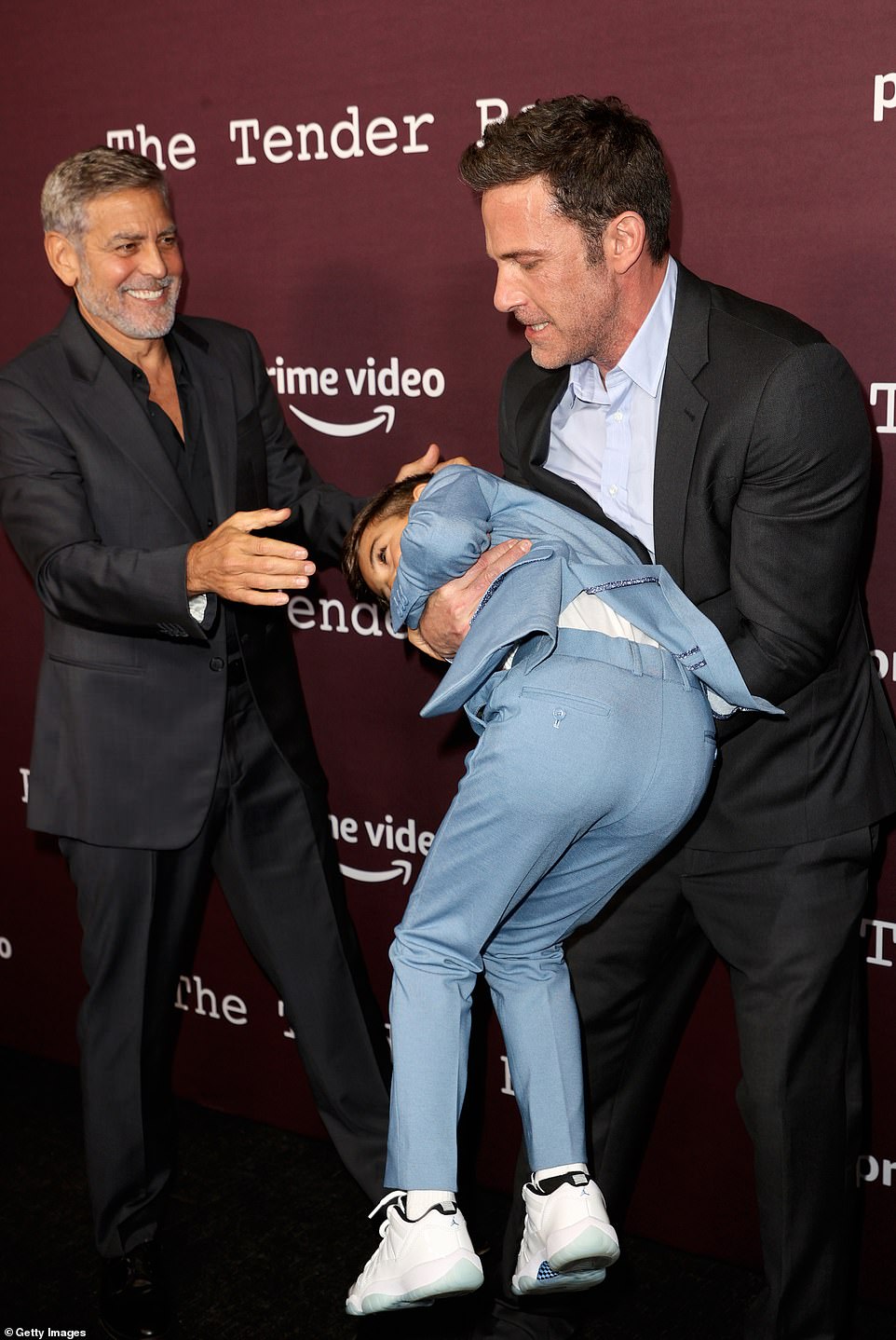 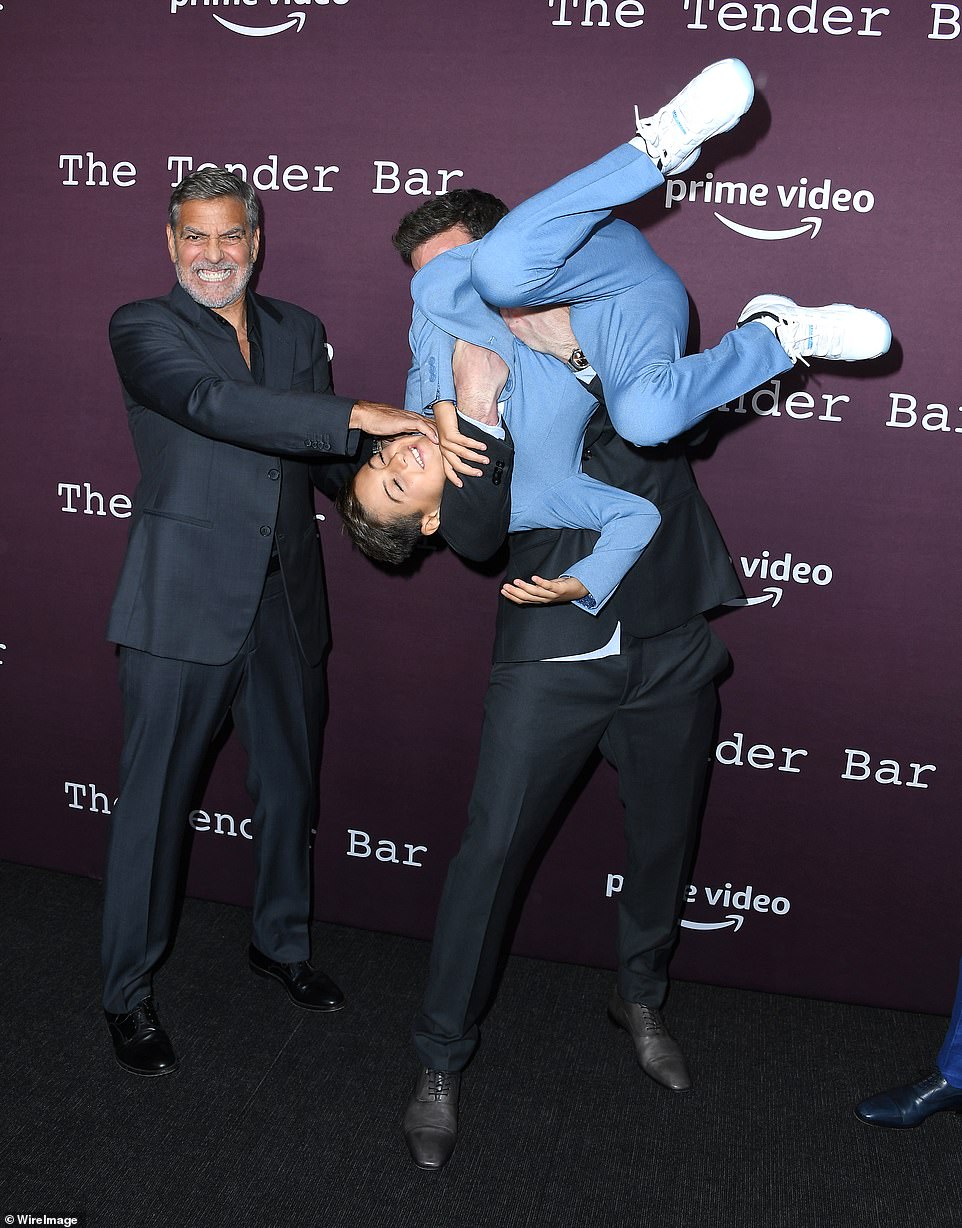 Action shot: Ranieri was in the best of company alongside Clooney and Affleck who had a little fun 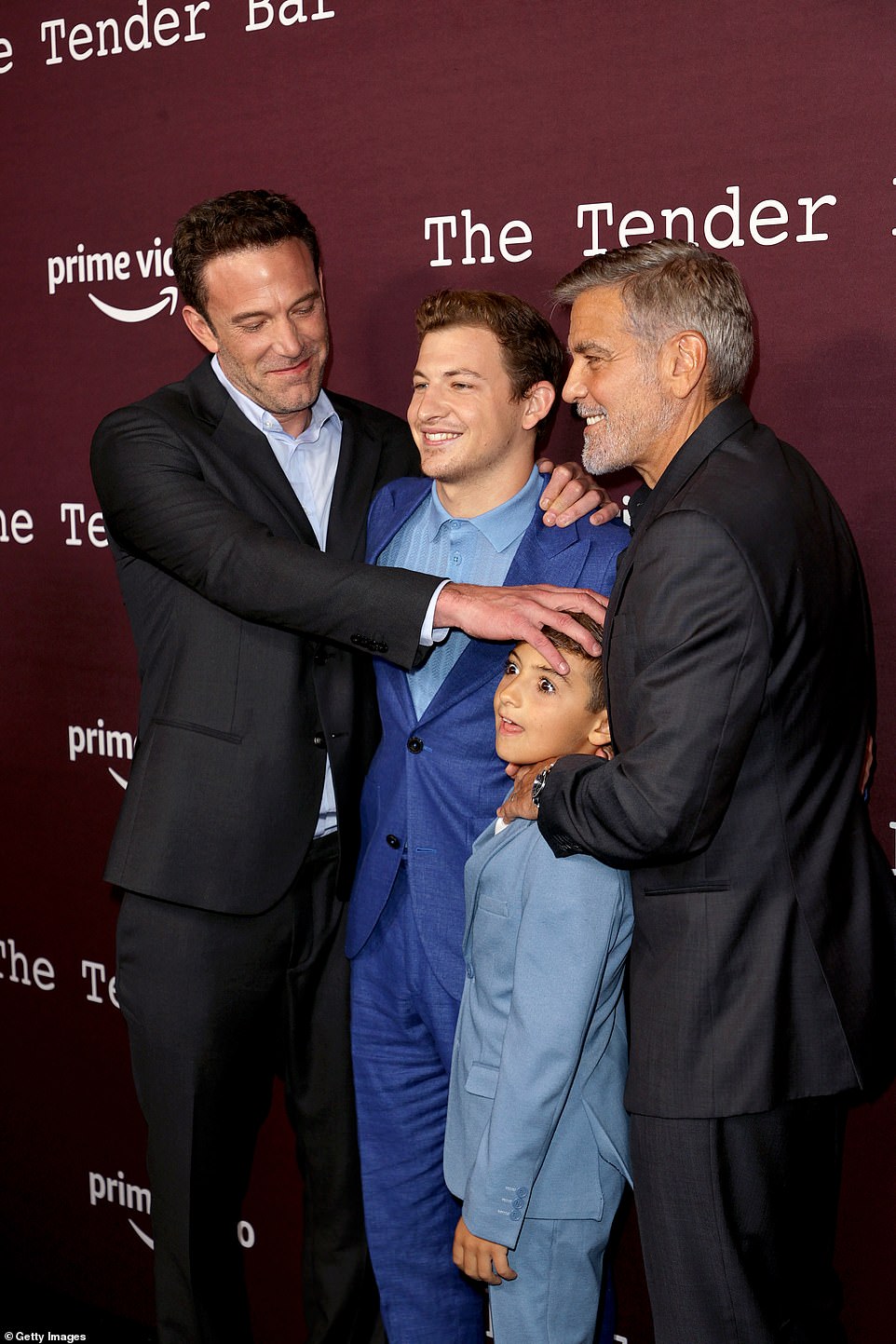 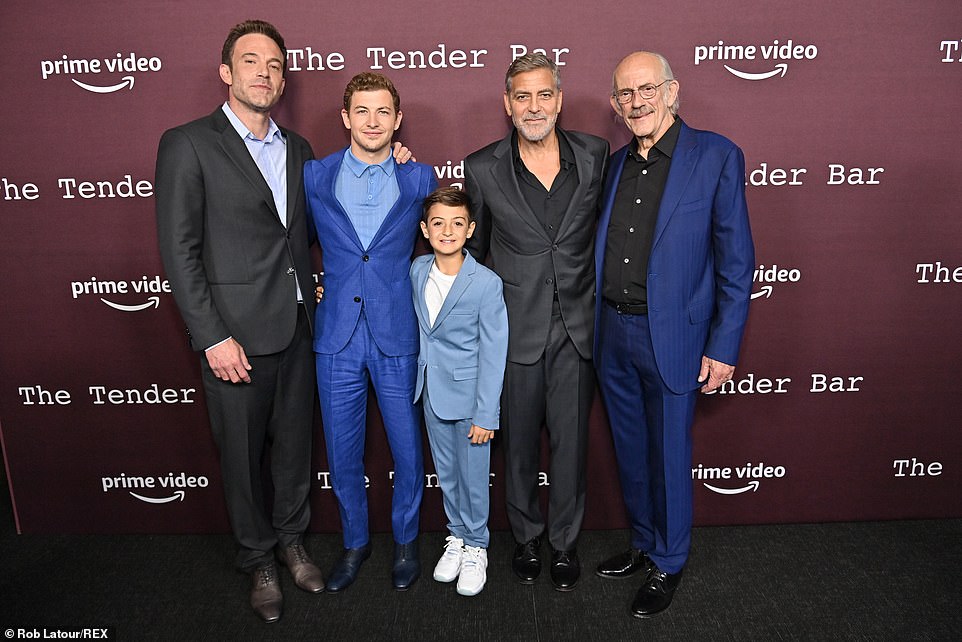 Rabe, 39, appeared at the event with partner Hamish Linklater, where she was seen cradling her baby bump, as just one week ago it was confirmed that the couple of eight years are expecting their third child together.

Lloyd, 82, of Back To The Future fame also was in good spirits at the event as he donned a suit while holding his wife Lisa, a real estate agent, close.

Tye, 24, looked handsome in a blue suit for his big debut, and was seen sandwiched in between Affleck and Clooney, alongside newcomer Ranieri, who was hoisted up into the air by a playful Affleck. 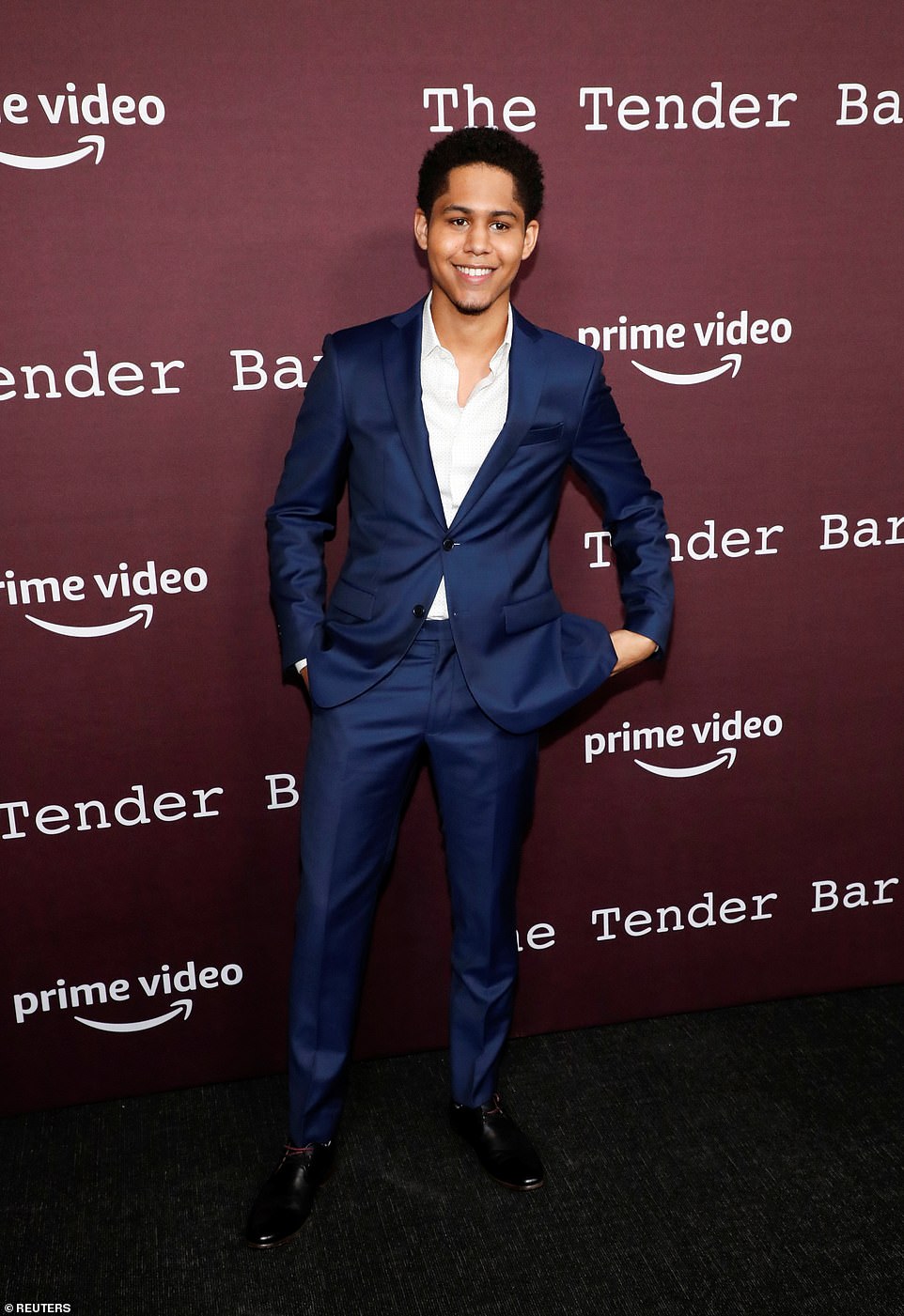 Other guests: Others who showed up to see the film included TV personality Sibley Scoles (left) and CMO of Prime Video and Amazon Studios, Ukonwa Ojo (right) 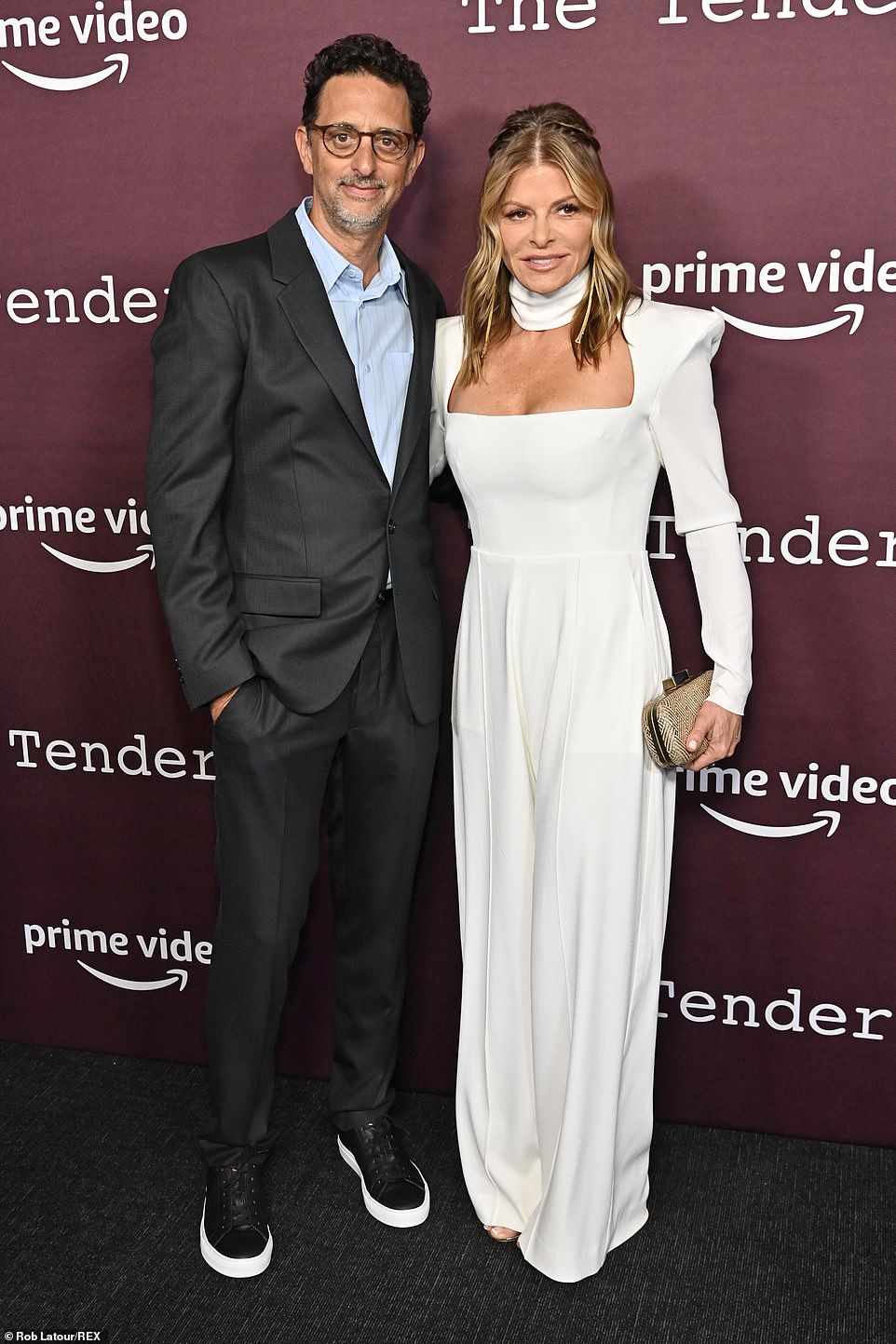 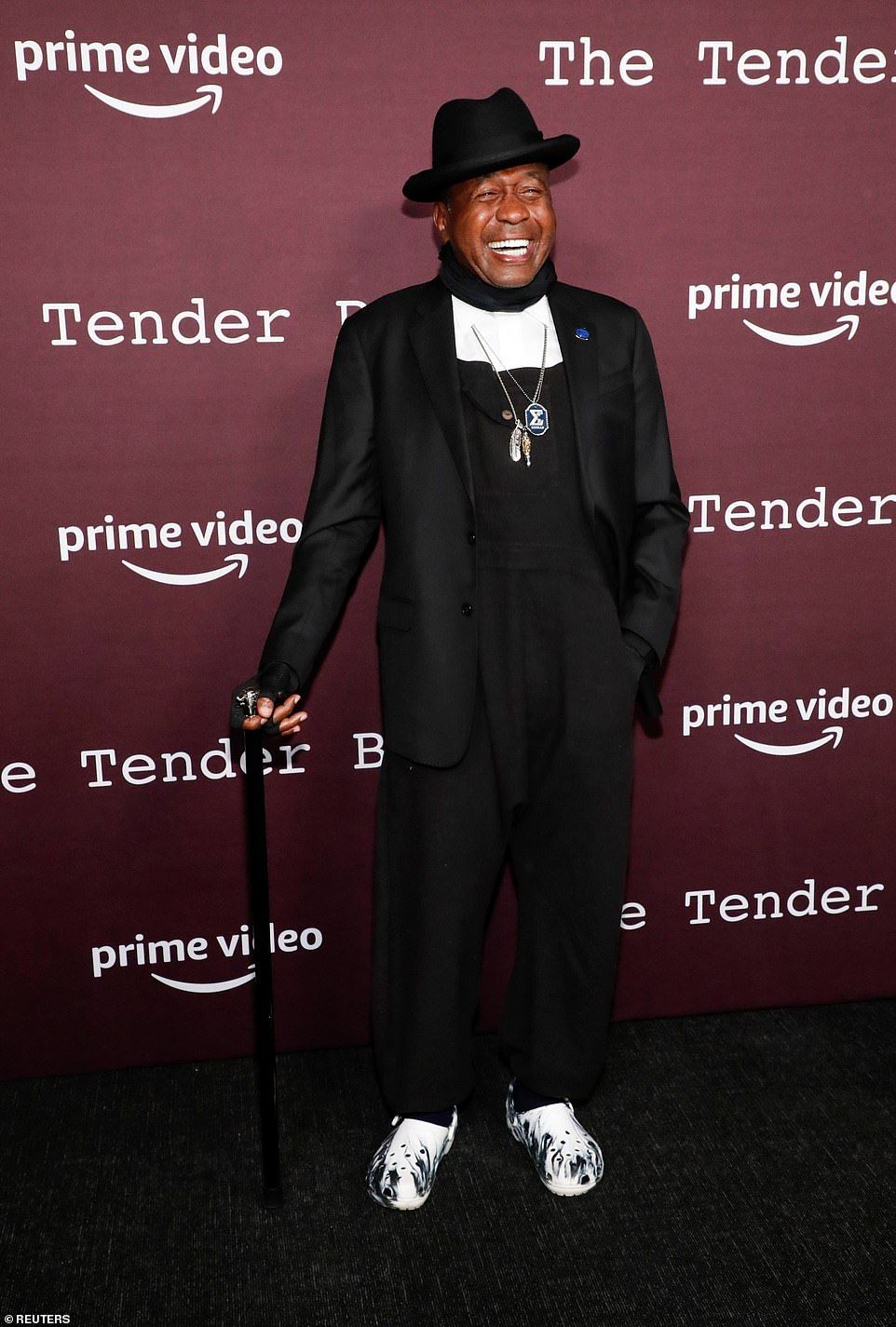 The movie is set for limited theatre release in Los Angeles and New York on December 17, before it will open nationwide on December 22.

Afterwards it will be available for global streaming on Amazon Prime Video, January 7.  ing 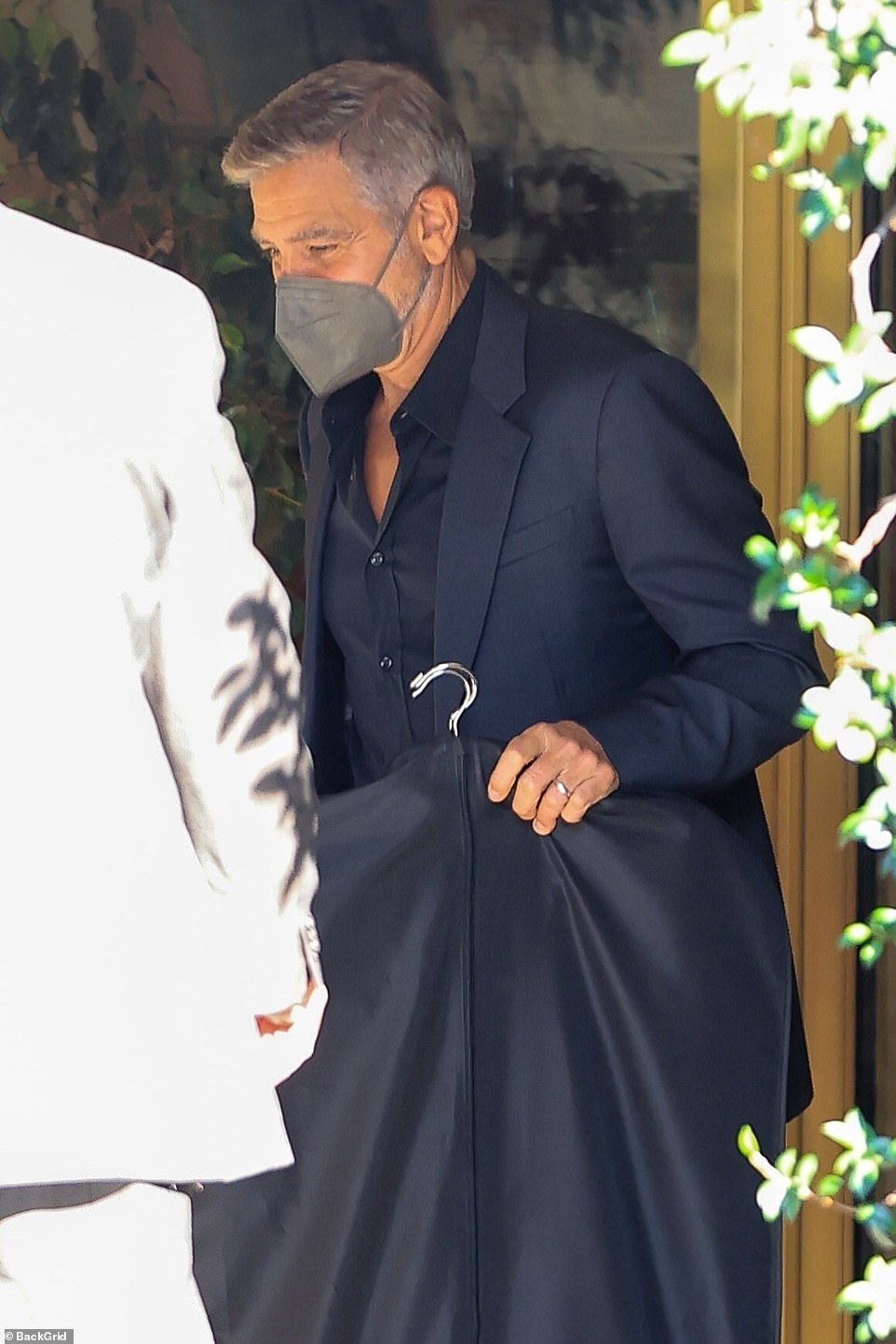 Earlier: Clooney was seen leaving the Sunset Towers hotel ahead of the event

Show time: He hopped from the hotel to the DGA for the The Tender Bar premiere with what looked to be a slew of wardrobe options in hand