A member of the Bush family took aim at those in favor of gun control with a controversial Instagram over the weekend.

Charles Walker Bush, the adopted son of Marvin Bush, posted photos of his four automatic rifles on Saturday, writing: ‘Just to p*** the snowflakes off. Have fun trying to take them. #assaultisaverbnotanadjective #ar15 #marchforourlives’

Gramps: Charles Walker Bush posted a photo of his four automatic rifles on Saturday and wrote: ‘Just to p*** the snowflakes off. Have fun trying to take them’ (Charles Bush and Gerge H W Bush) 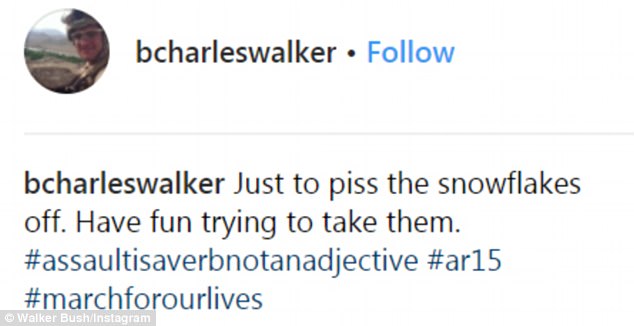 Remark: He tagged the post with #marchforourlives on the day that hundreds of thousands around the country protested gun laws in the US 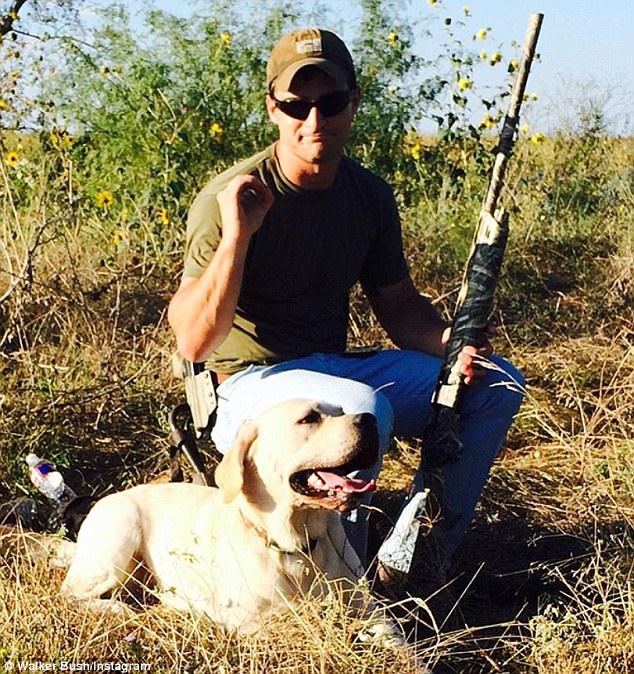 Shoot: Bush, who served in the Marine Corps, has posted photos of his guns multiple times in the past on social media, and this new post led to some outcry

‘I respectfully disagree with your views on gun control but what are you accomplishing by trolling people who are sympathetic to victims of mass shootings and simply want to try to prevent them from happening in the future,’ wrote one Instagram user.

‘Today I saw children stand up in front of half a million people and talk about losing loved ones to gun violence. Are they “snowflakes”?’

Bush, who served in the Marine Corps, responded to the comment, writing: ‘I’m sympathetic to anyone who has lost a loved one, friend, or anyone they know to senseless violent acts.

‘However, I find it ironic that the same people who claim our government is corrupt and tyrannical are the same ones calling for that same government to take away the given right to protect themselves against that government.

‘I think there is a lot of irrationality in today’s culture. I posted this because I believe it is my duty to stand up for the things I believe in and hold dear, one that is a precious right of the people on the brink.’

Other Instagram users were fans of the caption and sentiment that Bush presented in the post, but not a woman by the name of Diane Mead.

‘I think at this stage of the game George Herbert Walker Bush and George W. Bush would want to categorize themselves snowflakes. On this issue,’ wrote Mead.

‘They have great respect for guns. They are smart guys. Go ask them. Get educated by your intelligent relatives.’

Among the guns that Bush posted meanwhile looked to be a 6.5 Grendel and a Barrett .338 Lapua.

He has made no secret of his love for guns in the past, or been afraid to take a political stand even if it differs from the views of his family. 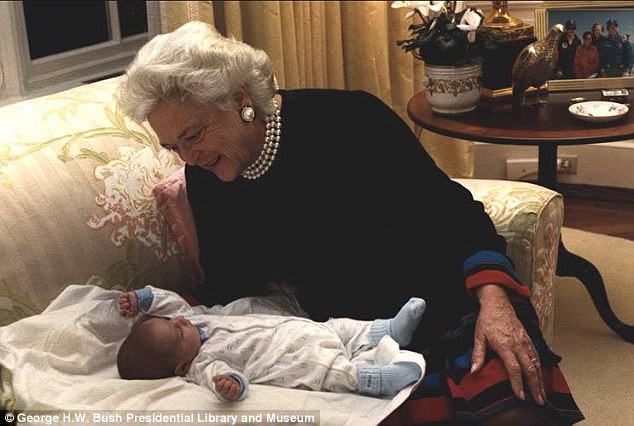 Baby love: Bush in the grandson of George H.W. Bush and nephew of George W. Bush. His father is Mrvin Bush, who adopted Charles in 1989 (with his grandmother in 1989) 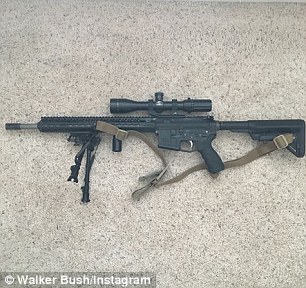 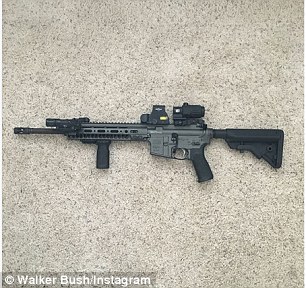 Gun show: ‘I think at this stage of the game George Herbert Walker Bush and George W. Bush would want to categorize themselves snowflakes. On this issue,’ wrote one critic (two of Bush’s guns above)

He called for an NFL boycott earlier this year after players began protesting by taking a knee during the anthem, writing: ‘Way to slap people like Pat Tillman, Nate Boyer, and Ahmard Hall (just to name a few) in the face. Your brothers and mine. Get off your high horses and use your millions for something meaningful.’

A majority of the Bush family was off in Colorado over the weekend, attending the wedding of Pierce Bush.

Charles did not seem to be among those who made the guest list, but his cousins Jenna Bush Hager, Lauren Bush Lauren and Ashley Lauren were there as were his uncles Neal and Jeb.

And George W. Bush was there as well, and could be seen cutting a rug with the bride in one video posted to Instagram.