George H.W. Bush remains in hospital to build up strength

Former US president George H.W. Bush will remain in hospital over the coming days as he recovers from an infection, his spokesman said Friday.

Bush was hospitalized shortly after the funeral of wife Barbara last week.

Bush, the 41st president and father of the 43rd, George W. Bush, will stay at Houston Methodist Hospital ‘through the weekend to continue his recovery and regaining strength,’ spokesman Jim McGrath said in a statement.

Former US president George H.W. Bush (seen with his son last weekend) will remain in hospital over the coming days as he recovers from an infection

’41 is in excellent spirits, and is looking forward to resuming his schedule and going to Maine next month,’ McGrath said.

Bush, 93, was admitted to intensive care on April 22, just a day after his wife of 73 years was laid to rest at age 92 following a memorial service.

Prior to that service, he had sat near his wife’s coffin, greeting well-wishers who had come to pay their respects.

On Wednesday Bush’s office said he was alert, talking with hospital staff and family, and eager to follow the progress of the Houston Rockets basketball team as they navigated the NBA playoffs. 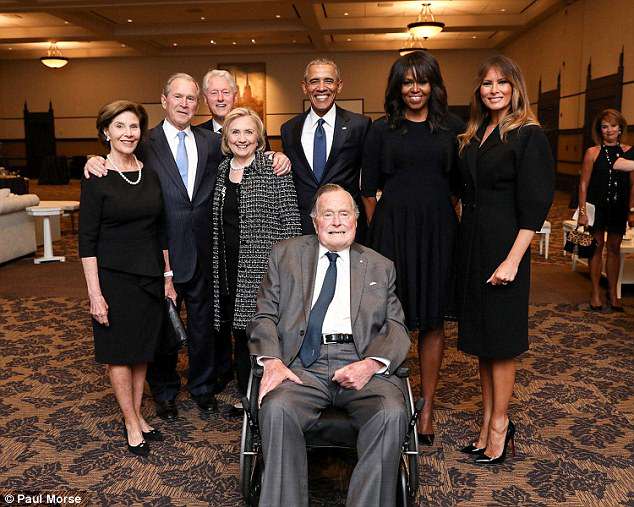 Bush, who suffers from Parkinson’s disease and is wheelchair-bound, has been hospitalized on several occasions in recent years.

He attended his wife’s funeral along with three other former presidents: his son, Bill Clinton and Barack Obama.

The elder Bush was elected president in 1988 but served only one term, going down to defeat against Democrat Clinton in 1992.