George Osborne faced a furious Tory backlash last night after suggesting that Britain’s independent economic watchdog was in favour of remaining in the EU.

The Chancellor was accused of ‘politicising’ the independent Office for Budget Responsibility (OBR) after he used his Budget speech to suggest the watchdog backed his view that leaving the EU would wreck Britain’s economy.

Tory MP Stewart Jackson mouthed the words ‘complete b******s’ as Mr Osborne said Brexit would ‘put at risk all the hard work that the British people have done to make our country strong again’.

Five minutes into his speech, the Chancellor launched into a lengthy defence of EU membership, quoting selectively from the OBR to make his case, despite the watchdog barely mentioning the EU referendum in its extensive report on the state of the economy.

Mr Osborne said: ‘The OBR are explicit today that their forecasts are predicated on Britain remaining in the European Union.

‘The OBR correctly stay out of the political debate and do not assess the long-term costs and benefits of EU membership.

But they do say this, and I quote them directly: ‘A vote to leave in the forthcoming referendum could usher in an extended period of uncertainty regarding the precise terms of the UK’s future relationship with the EU. This could have negative implications for activity via business and consumer confidence and might result in greater volatility in financial and other asset markets’.

‘Citing a number of external reports, the OBR say this: ‘There appears to be a greater consensus that a vote to leave would result in a period of potentially disruptive uncertainty while the precise details of the UK’s new relationship with the EU were negotiated.’

‘The House knows my view. Britain will be stronger, safer and better off inside a reformed European Union.

‘I believe we should not put at risk all the hard work that the British people have done to make our country strong again.’

Former Tory defence secretary Liam Fox MP accused Mr Osborne of ‘politicising’ the OBR for his own political ends, adding: ‘To use the Budget as a tool for the ‘remain’ campaign was both inappropriate and unnecessarily provocative.’ 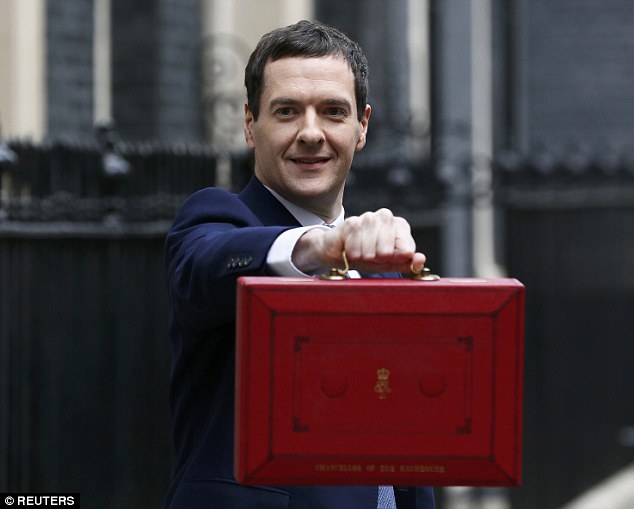 Savers who put money in the stock market will be charged less tax when they cash in their investments.

In an unexpected announcement, capital gains tax for investors who sell stocks and shares will be almost halved.

However anyone who has put money into property will continue to pay the higher rates. David Hicks, of Deloitte, said: ‘With capital gains tax staying at existing rates on buy-to-let property, investors will have to think hard on future investment decisions.’

When you sell an investment and make a profit, or a gain, you pay tax on the amount you make. Around 400,000 people pay capital gains tax every year, raising £5.5billion in revenue for the Treasury. Every saver gets an allowance of £11,100 a year before they are charged the tax. 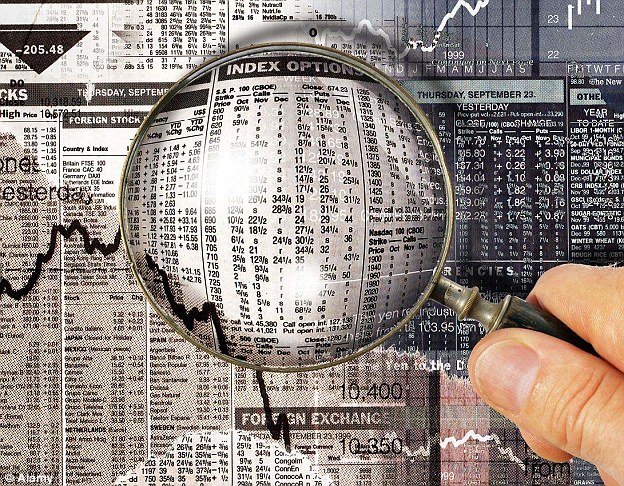 Under the new rules, from April 6, the same basic-rate payer would pay tax of just £1,390, saving £1,112. A higher-rate taxpayer would pay £2,780, saving the same amount. The changes are forecast to put an extra £2.8billion in investors’ pockets over the next five years.

Tax expert David Kilshaw said: ‘Investors in stocks and shares are likely to be the main winners. Investors in residential property, often the villain in George Osborne’s Budgets, are once again left out in the cold.’

From April 2019, people who sell a second home or a buy-to-let property will only have 30 days to pay capital gains tax, compared to as long as two years currently. This is expected to generate a £1billion Treasury windfall.

Matthew Elliott, chief executive of the Vote Leave campaign, said: ‘Disappointingly, the Chancellor sought to politicise the OBR and drag it into his campaign to keep us in the EU, despite the OBR making clear that it was not making a judgment about the referendum.’

In its report, the OBR said it was ‘not for us to judge at this stage what the impact of Brexit might be on the economy and the public finances’.

The studies by external bodies cited by the OBR produced mixed forecasts on the likely impact of leaving the EU. The watchdog said there were only ‘tentative signs’ that uncertainty about the referendum result ‘was affecting business and consumer confidence’.

Treasury sources last night denied leaning on the OBR to include pro-Brussels sentiments in its report.

A source said: ‘If we had wanted to drag them into this we would have asked them to produce an assessment of the costs of leaving the EU. The OBR alone is responsible for the contents of its documents. But the idea that the Chancellor could have delivered a speech about the risks facing Britain without mentioning the referendum is just not realistic.’

Expert whose sums don’t add up

Andrew Pierce for the Daily Mail 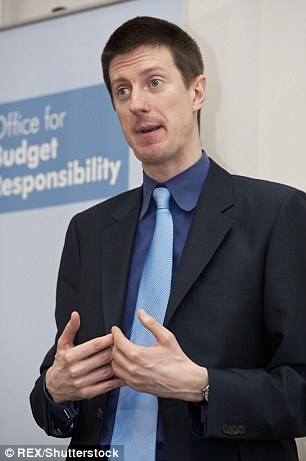 When he was appointed as Britain’s so-called ‘fiscal policeman’, Robert Chote couldn’t have hoped for more effusive praise. George Osborne hailed him as ‘one of the most credible independent voices on the public finances’.

That was six years ago when he was chosen to be director of the Office for Budget Responsibility, the body set up by the Government to fulfil its promise to make economic policy-making more transparent.

Its aim was to try to restore public trust in forecasting after successive Chancellors had been accused of getting Treasury officials to cover up their mistakes by using bogus statistics. However, Osborne’s humiliating admission yesterday that the financial figures he had set out in November – endorsed by the OBR – were deeply flawed is also hugely embarrassing for Chote.

Mischievously, many MPs – Tory and Labour – were heard muttering last night that his forecasts are becoming criminally negligent. It isn’t the first time Chote and his team have been rebuked. In 2012, his forecasting was branded ‘appalling’ and a ‘disaster’ by Doug McWilliams, the chief executive of the Centre for Economics and Business Research.

Indeed, the OBR has often been accused of being the Chancellor’s in-house prophets who keep getting their forecasts wrong.

As for Chote, the 48-year-old has been criticised for exploiting the way Osborne clearly respects him by acting some times as ‘one man judge and jury’ on the state of the British economy.

He trained as a journalist, and was once economics editor of the Financial Times – when he had a series of run-ins with the then Chancellor, Gordon Brown, and his sidekick Ed Balls. Relations were so bad at one point that Brown’s aides tried to get Chote’s editor to move or sack him.

Undaunted, Chote’s career blossomed and in 2002 he became director of the Institute of Fiscal Studies. For eight years, he appeared in the media, fearlessly dissecting the economic policies of the main political parties.

Inevitably, he continued to hound Mr Brown, whose Budgets were routinely excoriated by Chote’s institute for being ‘all smoke and mirrors’ that hid the true scale of Britain’s economic problems from voters.

After Chote was hired to head the OBR (amid accusations the Chancellor had picked him because he would look favourably on a Tory-run Treasury), he got off to an ignominious start – delivering wildly over-optimistic growth forecasts for 2011, 2012 and 2013, which he was forced to revise.

And last year, the OBR was criticised for appearing to be too close to the Treasury after emails came to light from Osborne’s officials which showed they had tried to get the OBR to provide more upbeat language in its forecasts. An embattled Chote tried to ride out the storm by dismissing the emails as having been sent by a junior official. But the impression remained that he was too close to Whitehall, and the Chancellor in particular. A Cambridge graduate and the son of an Olympic javelin-thrower, Chote had studied at Johns Hopkins University in America and then wrote travel books, including one titled The Alternative Holiday Guide To Exploring Nature In The Wilds Of Europe.

He is married to Sharon White, who is the first female, and first black, head of media regulator Ofcom. She once worked in Tony Blair’s policy unit and the couple were nicknamed ‘Mr and Mrs Treasury’. As the OBR is meant to be completely independent, Whitehall wits commented at the time that there must be no pillow talk between the pair.

The couple live in Hampstead, north London, have two school-age sons and are regular churchgoers. In a recent interview, Chote said he liked economics at school but added: ‘My maths wasn’t good enough to be an academic economist, hence journalism.’ Of his work at the OBR, he said: ‘We can’t guarantee our forecasts will be accurate.’