George Osborne got behind a string of high profile transport projects yesterday – but left it unclear when they will be completed.

The Chancellor announced backing for part of High Speed 3, a proposed rail line crossing the North of England.

He also gave the ‘green light’ to Crossrail 2, a major rail project crossing London, and raised the prospect of a giant tunnel being built through the Pennines.

The Chancellor announced backing for part of High Speed 3, a proposed rail line crossing the North of England

Mr Osborne said he was ‘making the Northern Powerhouse a reality’ and ‘investing in infrastructure’.

But the amount of money committed to the projects will only begin to fund their development, and all are years away from construction even beginning.

He was also criticised for failing to resolve the thorny question of whether a new runway will be built at Heathrow – despite years of delays.

Mr Osborne announced £60million for High Speed 3 between Manchester and Leeds. Independent estimates put the overall cost of the project at around £7billion.

Tax savings for the North Sea oil industry worth £1billion over five years were announced yesterday.

Prior to the 2014 referendum, the SNP predicted a separate Scotland could generate £4.7billion from the North Sea in 2016/17 and £4.9billion the following year.

However excess supply has pushed the price of oil down 65 per cent since summer 2014 when it reached $115 a barrel and is now around $40.

Just four years ago the industry paid £11.3billion in tax revenues but this has collapsed to £2.2billion last year and it will be zero this year.

The Office for Budget Responsibility also forecast the industry will cost the government £1.1billion next year and £1billion by 2018.

In a reference to the independence referendum, Mr Osborne added: ‘Thankfully, the Scottish people decided that we are better together in one United Kingdom.’

The cost of running 125mph trains all the way across from Liverpool to Newcastle and Hull will be even more, and is decades away.

Crossrail 2 got £80million to help fund development of the line between South West and North East London.

The 18-mile road tunnel through the Pennines, linking Sheffield and Manchester, is expected to cost £6billion. The Chancellor allocated £75million to ‘explore options’ for the project.

Mr Osborne did pledge £161million for Highways England to speed up upgrades to the M62, to make it four lane.

There will also be upgrades to roads in the North Pennines including the A66 and A69.

Aides said the Chancellor was bringing forward capital spending in this Parliament ‘to invest in the Government’s priorities and boost jobs and productivity’.

By spending billions more than planned in the early years, he hopes to boost growth and close a black hole in his deficit reduction plans.

But critics point out the projects have been long promised, without earth being turned. HS3 was first announced by the Chancellor in 2014.

Meanwhile, he first put aside £2million to investigate the feasibility of the Crossrail 2 project, which is expected to cost up to £32billion, in 2013. 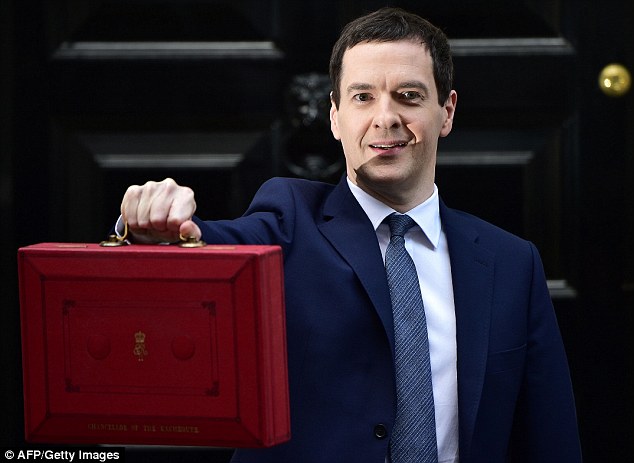 Budget: Mr Osborne announced £60million for High Speed 3 between Manchester and Leeds. Crossrail 2 got £80million to help fund development of the line between South West and North East London

SEVERN TOLL CUT AND £500,000 FOR BIKE RIDING IN YORKSHIRE

The Budget included a series of specific measures to boost the regional economy. They included:

Mike Perls, of the Institute of Directors, said: ‘For too long, productivity and growth in the North West has suffered because of under-investment in the northern infrastructure, certainly in comparison to the London investment.

‘This however, is only the start of the beginning. Transport is only one strand of achieving a Powerhouse and we need to see further investment – in science, energy, technology clusters and infrastructure, in further devolution of powers, in finances and in our cultural offer.’

The Chancellor has to stop promising and start delivering

Gavin Hayes, of Let Britain Fly, added: ‘It’s disappointing that whilst the Chancellor stated in his Budget speech “we are the builders” he then failed to reaffirm the Government’s commitment to make a final decision on building a new runway in London and the South East by the summer.

‘The Government claim this was a budget for the long-term, but here we have an urgently needed upgrade that will deliver tens of thousands of new jobs and generate tens of billions in GDP and there was no mention of it in the Chancellor’s speech.’

Lilian Greenwood, Labour’s shadow transport secretary, said: ‘Investment in transport infrastructure for the North is vital but under this Government there has been a huge gap between rhetoric and reality.

‘The Chancellor has to stop promising and start delivering.’

MANCHESTER LEADS MARCH OF THE MAYORS

By Tamara Cohen, Political Correspondent for the Daily Mail

The City of Manchester will be handed sweeping new powers over crime and policing, Mr Osborne announced, and a string of areas across the country will have elected mayors.

As part of a major expansion of devolution within England, the city’s mayor will preside over the criminal justice system as well as health and social care.

Greater Manchester will be given a greater role in the local probation service, education and health services in prisons, and work with youth offenders as well as supporting victims of crime. A Ministry of Justice spokesman said the area, combining ten local authorities, would have more powers over commissioning and shaping services, but not take full control of courts or prisons.

Manchester will elect its first mayor next year, along with Liverpool, the Tees Valley, the North-East and Sheffield, developing Mr Osborne’s vision of a ‘Northern Powerhouse’. The West Midlands will also have a mayor, as will East Anglia and the West of England – each of which will have almost £1billion of local investment to spend on public services.

But the flagship project will be in Manchester, which is already due to be handed £6billion in health and social care spending to distribute as it wishes. Mr Osborne said the local area would know what is best for patients, although critics said it could turn out to be a poisoned chalice amid intense pressure on the NHS and care budgets.