UK taxpayers will be able to hold on to more of their hard-earned cash after the Chancellor increased income tax-free earnings in today’s Budget.

Delivering another jump in the personal allowance, George Osborne said that from 6 April 2017, the start of the 2017/18 tax year, individuals will be able to earn £11,500 before they start to pay tax.

And in a boost for higher earners, he also increased the threshold at which 40 per cent income tax kicks in to £45,000 – this was the biggest giveaway to 40p taxpayers since the rate’s introduction nearly 30 years ago.

Keep more of your money: By raising the personal allowance and higher-rate thresholds, most people will pay less tax

The move represents a further step in the plan to raise the personal allowance all the way up to £12,500 and Mr Osborne claimed today’s rise would provide a tax cut for 31million people.

It is also a step towards rewarding higher earners who have suffered years of fiscal drag as the failure to raise the 40p tax threshold in line with wages has pulled millions more into the tax bracket.

Today’s announcement was part of the Tories’ manifesto commitment to raise the personal allowance to £12,500 by the end of parliament in 2020.

George Osborne had previously said in November’s Autumn Statement that the personal allowance would be increased in 2017/18 to £11,200.

The Treasury said today’s rise in the personal allowance ‘continues to ensure that no-one working 30 hours per week on the National Minimum Wage will pay income tax in 2017/18, and will bring the total number of taxpayers taken out of income tax since the start of this parliament to 1.3 million. 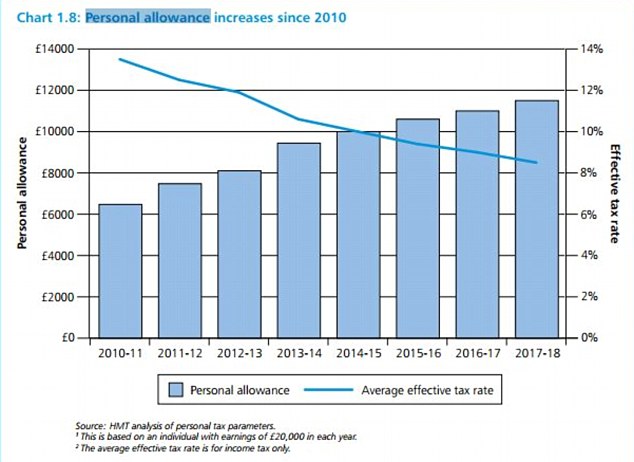 Going up: The personal allowance has been gradually rising since the 201/11 tax year

In the current tax year, individuals start paying 40 per cent tax when they earn £42,385.

The Treasury said the move to the £45,000 threshold ‘will be the biggest above-inflation cash increase to this threshold since it was introduced by Lord Lawson in 1989.

‘This delivers the Government’s ambition to reverse the trend whereby an increasing number of individuals are faced with paying the higher rate. In 2017/18, there will be 585,000 fewer higher rate taxpayers than at the start of the parliament.’ 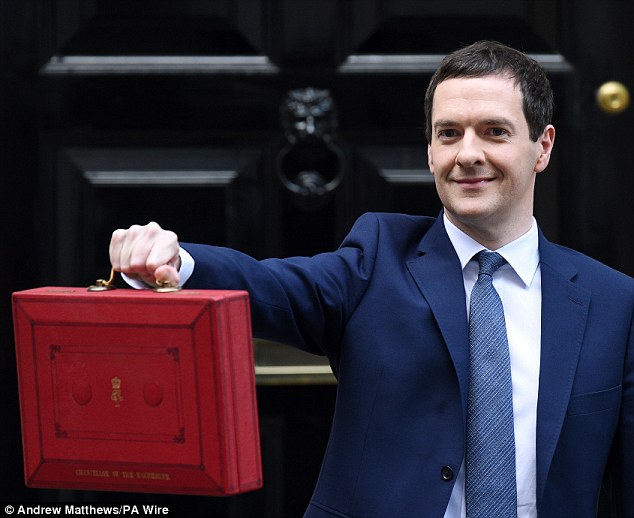 Ready for the off: George Osborne outside 11 Downing Street ahead of his Budget speech

Vince McLoughlin, partner at business and tax advisers Russell New, said: ‘The increase of the 40p tax threshold is welcome news, and it is well aligned to meet the chancellor’s target of £50,000 by the end of this Parliament in 2020.

‘This move will support middle class workers and management in addition to entrepreneurs throughout the UK as it simply enables them to keep more of their hard earned income. This move will also increase tax revenues which, in turn, provides more incentive to work and less inclination for businesses to avoid tax.’

He added: ‘This tax rate, when conceived years ago, was for the relatively well-off. However, mortgage and rent, season tickets, car, insurance, etc – all leave little for luxuries that one would normally associate with the well-off.

‘For these middle-income earners who are instinctively striving to improve their purse-strings there is no better way to support them by increasing the threshold where employee pay 40 per cent tax.’

However, thinktank The Resolution Foundation said increases in the higher-rate threshold benefit relatively few employees, with just 15 per cent (or 3.9 million) earning above the current threshold.

‘Raising the HRT is therefore a targeted tax cut on some of the country’s highest earners’, it said.