George Osborne MISSED his borrowing target for the last year by £1.8BILLION

George Osborne has been dealt a blow in his efforts to shore up the nation’s finances after official figures showed the Chancellor missed his borrowing targets for the year.

The Office for National Statistics said the budget deficit stood at £74 billion for the financial year ending in March.

The Office for Budget Responsibility had forecast borrowing to hit £72.2 billion for 2015/16, meaning the Chancellor overshot his borrowing target by £1.8 billion.

The missed target had become increasingly clear in recent months as borrowing figures showed Mr Osborne was perilously close to his targets.

But a little over a month since his last Budget the figures will come as a fresh blow to the Chancellor.

Mr Osborne’s plans have a huge hole in them after an embarrassing u-turn on cuts to disability benefits in the face of a Tory revolt.

A Treasury spokesman said the ‘figures confirm that the record post-war deficit we inherited has been cut by almost two thirds as a share of GDP’.

He said: ‘We are borrowing £18 billion less than last year and March’s monthly borrowing was the lowest for a decade.

‘But while the deficit is falling, the job of repairing the public finances is not done and the Budget set out action to ensure that debt falls in 2016-17 and Britain is back in the black by the end of this parliament.’ 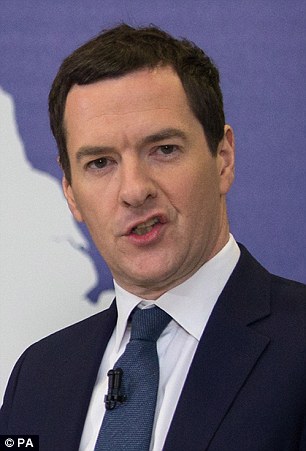 Shadow chancellor John McDonnell said: ‘The latest figures for public sector borrowing show George Osborne is on course to miss his only remaining target for the economy, with the Tory Government’s deficit significantly higher than forecast.

‘Government debt is rising even as unemployment increases and exports slump. ‘This is a record of further failure from the Chancellor of the Exchequer.

‘His recovery is built on sand and his unaffordable and counterproductive fiscal targets mean that failures will continue.

‘Labour’s Fiscal Credibility Rule would set a realistic target to get rid of the deficit on day-to-day spending whilst allowing government the capacity to invest in the high-tech, high-wage economy of the future.’

It added that the Government saved £1.3 billion on the cost of ‘day-to-day’ activities of the public sector, but spent £6.1 billion on infrastructure.

Public sector net debt excluding public sector banks increased by £47.5 billion year-on-year to £1,594.1 billion to the end of March, the equivalent to 83.5 per cent of gross domestic product.

The ONS said central government received £636.2 billion in income for the financial year to March, up 4 per cent on 2015, as it raked more money from taxes.

But it said the Government spent £696.2 billion – around the same as the year before – with two-thirds being used for central government departments, a third on social benefits including pensions, unemployment payments, child benefit and maternity pay, and the rest on capital investment and the interest on the Government’s outstanding debt.

Samuel Tombs, chief UK economist at Pantheon Macroeconomics, said weak growth from tax receipts in the middle of last year was the reason the Chancellor missed his borrowing target.

He added: ‘Nonetheless, the risk of a much bigger overshoot this year has grown as the economy has slowed.

‘With the fiscal projections also resting on optimistic assumptions for revenues from tax avoidance measures and savings from the welfare budget, we continue to think that the Chancellor will have to implement even more austerity than planned to achieve a budget surplus by 2020.’ 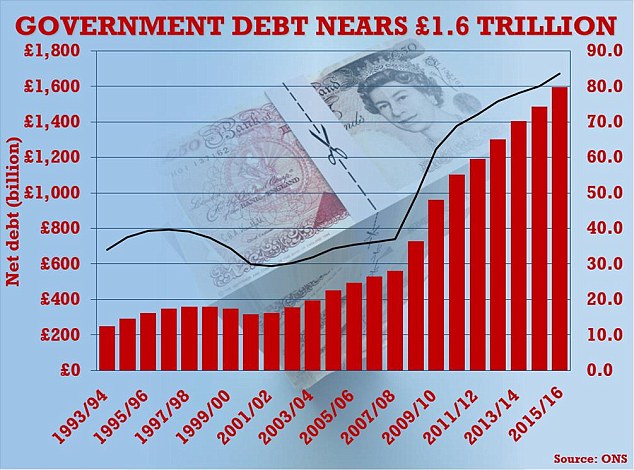 Today’s data revealed total national debt was very close to breaching the £1.6trillion mark for the first time after Mr Osborne borrowed £74billion in the past 12 months