Can George Osborne write like an injket printer? Chancellor mocked after posing with pen over printed Budget speech

As Chancellor of the Exchequer, writing the Budget speech is one of the biggest parts of George Osborne’s job.

But he was mocked online this morning after posting a picture online which appeared to show him writing in a perfect Times New Roman font.

Mr Osborne tweeted the picture of his Budget speech, but social media users were quick to point out that the sheet of paper in front of him had been typed and not handwritten.

The Chancellor is announcing sweeping tax cuts for the low paid and middle classes while promising to take the axe to Britain’s benefits bill.

But he is also using his Commons statement to set out reforms to education and welfare, push through road, rail and infrastructure projects and promise bold action to back the ‘aspirations of working people’.

Against the backdrop of the deepening euro crisis in Greece, Mr Osborne will warn of the perils of a ‘country not in control of its borrowing’.

And he will make clear that years of austerity still lie ahead in his plan to get Britain back in the black.

In a tweet posted online this morning, Mr Osborne said: ‘Today I will present a Conservative Budget – a Budget that puts economic security first.’ 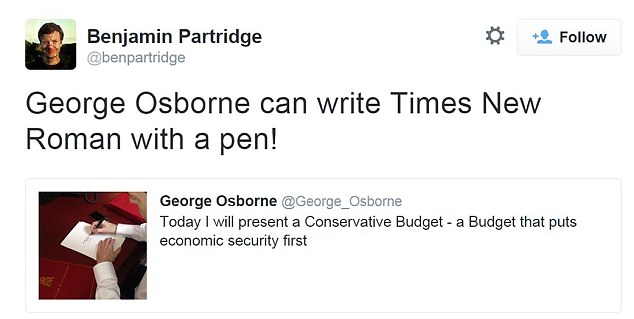 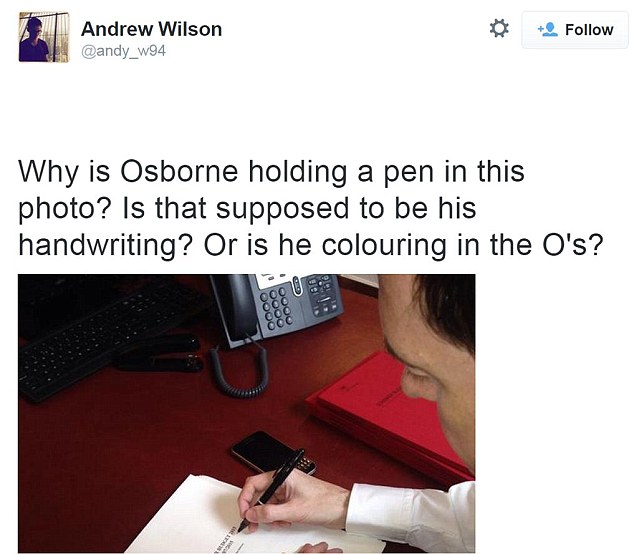 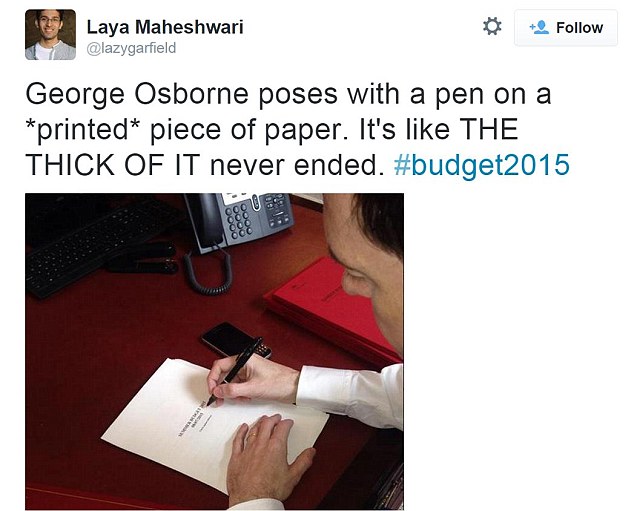 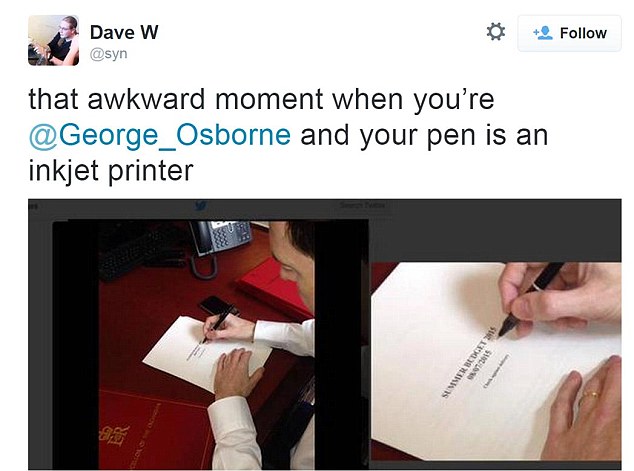 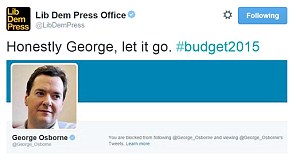 Just four months ago, George Osborne and his Lib Dem number two Danny Alexander stood together in Downing Street ahead of their last Coalition budget.

But the relationship between the Chancellor and his former allies appears to have dramatically soured after it emerged he had officially ‘blocked’ the Lib Dems on his official Twitter account.

Mr Osborne’s decision, which means the Lib Dems cannot view any of his Twitter messages, was ridiculed this morning.

One party source said: ‘You would’ve thought he had much greater things to worry about on Budget day than the Lib Dem press office.

‘He must have seen something from us he didn’t like and decided to block us. It’s rather daft. It gives you a bit of an insight into his state of mind.’

The picture was taken at his desk in Number 11 Downing Street, with his official red leather folder to his left and the red Budget book to his right.

While Mr Osborne hoped to communicated the message behind his Budget measures, some on Twitter were more interested in what he was doing with his pen.

Andrew Wilson asked: ‘Why is Osborne holding a pen in this photo? Is that supposed to be his handwriting? Or is he colouring in the O’s?’

Dave W added: ‘That awkward moment when you’re George Osborne and your pen is an inkjet printer.’

Freed from the shackles of coalition with the Lib Dems, Mr Osborne will use his Commons statement to set out the first all-Tory Budget since 1996.

He will give more detail of his plan to tackle the £75billion deficit and have the government raising more than it spends by 2018-19.

The Conservatives are committed to cutting £12billion from the welfare budget, with tax credits and housing benefit suffering the biggest cuts.

However, the Treasury has raked in more than expected in taxes in the last year creating ‘wiggle room’ for Mr Osborne to implement the benefit cuts over the next three years instead of two.

Analysts have suggested the Treasury could receive an additional £700 million this year – twice official expectations – thanks to new pension freedoms.