George Osborne is the most substantial politician in this Government, the least irresponsible Chancellor of the Exchequer since Ken Clarke lost the job in 1997.

But yesterday he delivered his Budget in the tones of a rattled man, who sees his prospects of becoming prime minister shrinking by the day.

‘The storm clouds are gathering,’ he warned. He spoke of the uncertainty of nervous markets. He asserted that the British economy is fundamentally strong, but faces ‘very difficult world conditions’. He acknowledged that the recovery has slowed, and that growth will undershoot his forecasts, just as most of the numbers have fallen short of predictions since 2010.

The Office for Budget Responsibility says that Britain’s productivity is still lagging behind expectations, although Osborne takes refuge in the fact that most of Europe is doing no better, or even worse. He continues to expect a budget surplus by 2020, although torpid tax revenues make this seem pretty speculative.

George Osborne is the most substantial politician in this Government, the least irresponsible Chancellor of the Exchequer since Ken Clarke lost the job in 1997. But yesterday he delivered his Budget in the tones of a rattled man, who sees his prospects of becoming prime minister shrinking by the day

The Chancellor was justified in pointing out that the country would be in much deeper debt if Labour’s prescriptions had been followed since 2010 (he claims the Exchequer would be £930 billion worse off, and he may be right).

But this is scant comfort, when the most pertinent fact about Britain is that as a nation we are still vastly over-borrowed. The reasons are simple: we are cutting public spending less than prudence demands, still paying ourselves as a nation more than we earn.

Though he claims our economy is basically sound, this remains doubtful as long as its chief engine is consumer spending and borrowing, while manufacturing languishes. One of these fine days, our hideous trade imbalance with the rest of the world is likely to jump out and bite us.

More from Max Hastings for the Daily Mail…

All British Budgets are ham theatre. Chancellors announce the shuffling of a few millions here, a few there, whereas the number that matters — overall government expenditure — amounted last year to £748 billion. Most of this, however, is what the Government regards as non-discretionary spending: on welfare, pensions, the NHS and, at David Cameron’s stubborn insistence, overseas aid.

George Osborne nowadays seems to assume strategic responsibility for everything from education to railways and children’s health.

Some of these ideas are entirely sensible, but why the education parts should have been unveiled in a Budget speech was hard to justify, save to emphasise that the Chancellor does all serious policy-making, while David Cameron takes Prime Minister’s Questions in the Commons, glad-hands visiting foreign leaders and launches a small number of RAF Tornados against evil-doers.

Osborne gabbled through much of his speech yesterday. Our attention was distracted in every TV shot by the proximity of Theresa May’s cleavage. Perhaps this was prearranged to prevent us from noticing how petty were most of the Budget measures, hitting rock bottom with the portentous announcement that tolls on the Severn Bridge will be halved in 2018.

The Chancellor now knows that, well before the next election and maybe even before David Cameron quits the premiership, this economic cycle will hit a downturn. He is surely right that there is plenty of bad news coming in from across the world, especially China, and that this must affect us.

He is also entitled to say that, since 2010, he has struggled manfully to contain public expenditure, to reverse the insane extravagances of the Blair-Brown era. But not enough. Over past decades all Western European nations, and especially Britain, have indulged a wildly exaggerated sense of entitlement.

We have given ourselves state health and welfare benefits which are becoming unaffordable as the balance of global wealth tilts sharply away from the West towards Asia. We do not face absolute poverty, but it is essential to moderate state spending before fiscal disaster ruins our children’s futures.

Every electorate in the developed world resists cutbacks. France, in particular, has become almost ungovernable, as vested interests take to the streets to fight every encroachment on cherished privileges.

What is different in Britain is that Cameron’s Tories occupy as politically powerful a position as any government we are likely to have for decades.

The Labour opposition is almost moribund. There is never a right time to do unpopular things, but with more than four years before the next general election, Osborne and Cameron could and should be making a start on curbing the ever-ballooning costs of the NHS and the welfare system.

They can have a good argument about whether they begin by imposing a small charge for GP visits, to deter time-wasters, or by means-testing some drugs and treatments.

But it does not require a public school education to see that ring-fencing the health service from all budget cuts — not to mention doing the same for overseas aid — is crazy and unsustainable.

Something has got to be done some time — and if not now, when? Unfortunately, even tragically, George Osborne flagged his intentions, and his motives, in last autumn’s spending review.

He proposes to run the Treasury from now until David Cameron quits chiefly with an eye on securing the succession for himself. He is making policy as an aspiring prime minister, his economic programme shorn of fiscal objectivity and a noble aspiration to reform Britain in the long term.

This may be the way politicians behave, but it is not the way statesmen do. If I was a personal friend of Osborne, I would counsel him thus: you are an extremely able man, who since 2010 has done well by Britain. Justly or not, however, you lack the gift of making yourself liked. You are probably the fittest man to be the next prime minister, but you are unlikely to get the job.

You have a chance instead to earn the historic gratitude of the British people by doing hard things that need to be done. You can show yourself to be a Chancellor of real integrity, in the mould of men such as Geoffrey Howe and Ken Clarke. 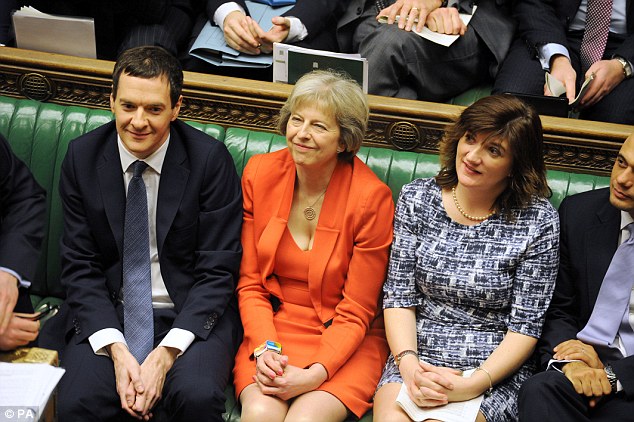 Osborne gabbled through much of his speech yesterday. Our attention was distracted in every TV shot by the proximity of Theresa May’s cleavage. Perhaps this was prearranged to prevent us from noticing how petty were most of the Budget measures

Yesterday, instead, was a missed opportunity, just as was the last spending review. Osborne cheapened himself by using his platform to claim that Brexit from Europe will damage the economy. We know he believes this, but the Budget speech was not the moment to make such a divisive point.

The Chancellor will further damage his hard-earned reputation if he chooses to follow David Cameron in addressing government as an endless succession of tactical issues, bereft of higher or longer-term purpose.

The above is written in sorrow. It is because George Osborne is capable of great things that it is dismaying to see him immerse himself in small ones, chiefly related to his own future.

He proudly declared yesterday ‘we choose to put the next generation first’. If he was serious about that, however, he would recognise that checking the careering juggernauts of health and welfare spending, and our consequent future indebtedness, are vastly more important than freezing fuel duty.

‘We are the builders,’ he said, announcing yet another railway for his fantasy ‘Northern Powerhouse’. But he would seem more deserving of our respect if he set about putting Britain on a path to long-term solvency, instead of merely papering over the yawning cracks in the nation’s finances.