George Osborne wooed Middle Britain with tax cuts and a big boost for savers yesterday but admitted the UK’s finances had plunged deeper into the red.

In a high-stakes Budget, he also slapped a surprise sugar tax of 8p on a can of fizzy drink and made incendiary remarks on the perils of Britain leaving the EU.

The Chancellor was forced to concede that previously rosy forecasts on growth, productivity, taxes and debt had all been blown dramatically off course – leaving the nation £55billion worse off.

In a high-stakes Budget, George Osborne slapped a surprise sugar tax of 8p on a can of fizzy drink and made incendiary remarks on the perils of Britain leaving the EU. The Chancellor was forced to concede that previously rosy forecasts on growth, productivity, taxes and debt had all been blown dramatically off course

But he is gambling that – with a £9billion tax raid on big business – he can balance the books and even fund an £850million-a-year savings account for the under-40s.

The Treasury will give £1 for every £4 a saver puts aside, up to a maximum of £1,000 a year, to fund retirement or a deposit on a first home. Financial experts said the potential £125,000 nest eggs may threaten the traditional pension.

In a package aimed squarely at middle-class voters, Mr Osborne pledged to increase the ISA limit to £20,000 a year, lift 600,000 earners out of the top rate of tax and free the same number of small firms from the burden of business rates.

His levy on sugary drinks stunned Westminster and raised accusations of ‘nannying’. But he insisted he could not stand by when there was an obesity crisis among children.

The Chancellor used his Commons speech to claim that voting to leave the EU would cause ‘an extended period of uncertainty’.

He said this was the opinion of the supposedly independent Office for Budget Responsibility – the same body that produced wildly inaccurate growth forecasts in last November’s autumn statement.

Tory MPs said the Chancellor was guilty of ‘politicising’ the OBR and scaremongering.

In his eighth Budget: 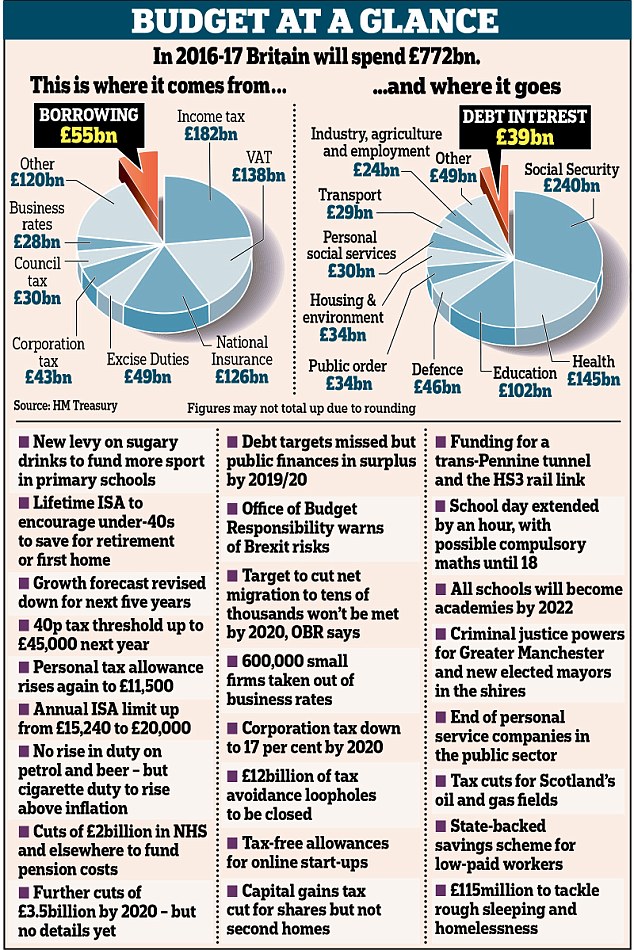 Critics claimed the sugar tax and other eyecatching measures were intended to distract from woeful figures on debt, borrowing and growth.

As recently as November, the OBR published forecasts that gave Mr Osborne an extra £27billion.

Yesterday, however, it said productivity would be far worse than predicted barely four months ago – leaving a £56billion black hole in the Chancellor’s plans.

Even after a £5.5billion package of cuts and the raid on big business, he will still have to borrow an additional £38billion over the course of this parliament.

Mr Osborne insists that – despite missing two other key targets on controlling spending – he is still on target to clear the deficit by 2020.

But this depends on a miraculous turnaround in the nation’s finances in the last year of the parliament, when the country is expected to move from a £21.4billion deficit to a £10.4billion surplus. 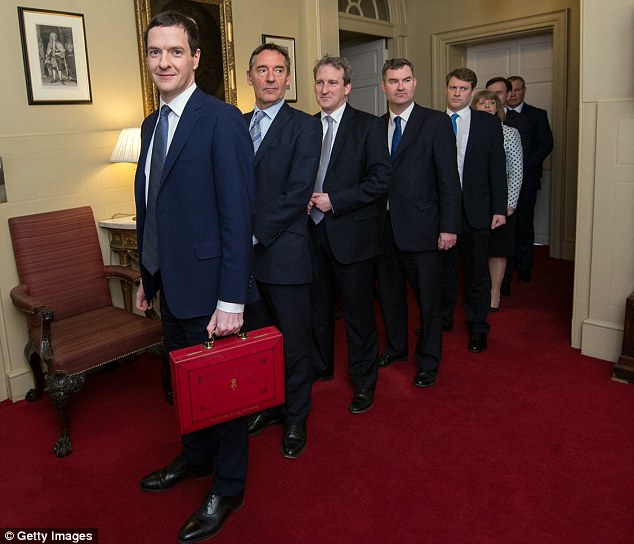 In a package aimed squarely at middle-class voters, Mr Osborne pledged to increase the ISA limit to £20,000 a year, lift 600,000 earners out of the top rate of tax and free the same number of small firms from the burden of business rates

James Sproule, chief economist at the Institute of Directors, warned: ‘The further predictions are into the future, the less accurate they become.

‘We should be especially cautious of the OBR’s projection that GDP will steadily tick up by around 2 per cent for the next five years.

‘If the Chancellor is hoping the next few years will be as predictable as the OBR forecast, he could be in for a shock, with deficit eradication targets slipping further into the future.’

In his first Budget response, Labour leader Jeremy Corbyn sought to appeal to his core vote. He described Mr Osborne’s plan as ‘the culmination of six years of his failures’ which had ‘unfairness at its core’.

Chef and campaigner Jamie Oliver welcomed the sugar levy, declaring it a ‘symbolic slap’ to big business. MPs had previously been told a decision had been put off until after the June 23 referendum. In a boost for firms, corporation tax will be cut to 17 per cent by April 2020. But bigger enterprises were clobbered with complex rule changes and other charges worth £9billion a year.

The Treasury also expects to rake in £12billion a year by cutting down on tax avoidance.

AS BUDGET IS UNVEILED, EMPLOYMENT RATE HITS A RECORD HIGH

George Osborne received a pre-Budget boost yesterday when figures released ahead of his speech showed record employment and another fall in the jobless count.

The three months to January saw 478,000 more people in jobs than a year earlier, with the employment rate hitting 74.1 per cent – the joint highest since records began in 1971.

Wage growth continued to rise slowly, with average earnings increasing by 2.1 per cent in the year to January, up fractionally on the previous month.

Public sector employment increased by 3,000 to 5.3million, largely due to a rise in the number of NHS staff. Local government employment fell to a record low of 2.2million.

Other figures revealed a 177,000 increase in part-time workers to almost 8.5million in the past year.

Employment minister Priti Patel said the figures showed the Tories were ‘delivering on our promise to support people to get on in life, and create greater economic security for all’.