Defence ‘to be cut by £1BILLION’: Move could hit operations overseas as Osborne seeks to reduce budgets of most government departments by extra 5 per cent

By Larisa Brown Defence Correspondent For The Daily Mail

Military chiefs have been told to slash the defence budget by £1billion in a move that could hit operations overseas, it emerged last night.

The department has already suffered devastating cuts while the foreign aid budget will be protected.

Chancellor George Osborne is seeking to cut the budgets of most government departments this year by an extra five per cent, according to the Times.

As a result the Treasury has told most departments – with the exception of health, education and international development – to find savings amounting to £3billion or more before the Budget on July 8.

The move is likely to infuriate military top brass and many Tory MPs who have repeatedly called for David Cameron to commit to spending two per cent of national income on defence in line with the Nato target.

By asking the department to further slash its budget, it raises the chances of Britain missing the crucial figure which could impact the country’s relationship with the US and other nations.

Defence sources last night warned the cuts would result in military training and possibly operational deployments being curtailed or cut.

A source told the newspaper: ‘The department is on budget so you would have to stop doing a lot of stuff.’

A saving of £1billion by the end of March next year would ‘not be a thing you could just swallow and carry on’, the source said.

Mr Cameron has already promised not to slash regular troop numbers and has committed to renewing the Trident nuclear deterrent programme.

Finding £1billion in the department could therefore prove difficult and analysts have warned operations overseas could become strained. 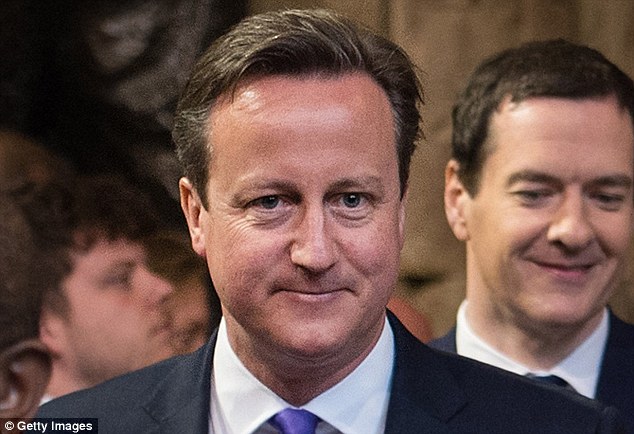 It comes after the Prime Minister was accused of being ‘disingenious’ earlier this week after claiming Britain would remain at the ‘forefront’ of efforts to defeat the Islamic State – but made no mention of defence spending in the Queen’s speech.

Analysts said that such a reduction would make it harder for the prime minister to keep defence spending above the Nato minimum of two per cent of national income.

The U.S is putting pressure on Britain to retain defence spending above this threshold at a time of growing insecurity caused by the rise of Islamic State and the resurgence of an adversarial Russia.

It is expected to be an issue that President Obama will raise with David Cameron when they meet at a G7 summit next month in Germany.