George Stubbs review: Anyone who visits this exhibition will surely enjoy the ride

George Stubbs didn’t just paint his creatures with accuracy, he did so with compassion… Anyone who visits this exhibition will surely enjoy the ride

George Stubbs: All Done From Nature

As nicknames go, the ‘Liverpudlian Leonardo’ isn’t a bad one. It’s how the 18th-century painter George Stubbs is often referred to: partly because he was born on Merseyside, and partly because he brought a scientific rigour to his art that recalled Leonardo da Vinci’s.

Stubbs is best known for his pictures of horses – and here in an excellent new exhibition we see a handful of his early drawings. These were the result of 18 infamous months when he locked himself away in a barn in the Lincolnshire village of Horkstow.

There, from an iron bar on the ceiling, he suspended the carcass of horse after horse, depicting them in various states of dissection. Stubbs revelled in removing the skin, blood and guts. 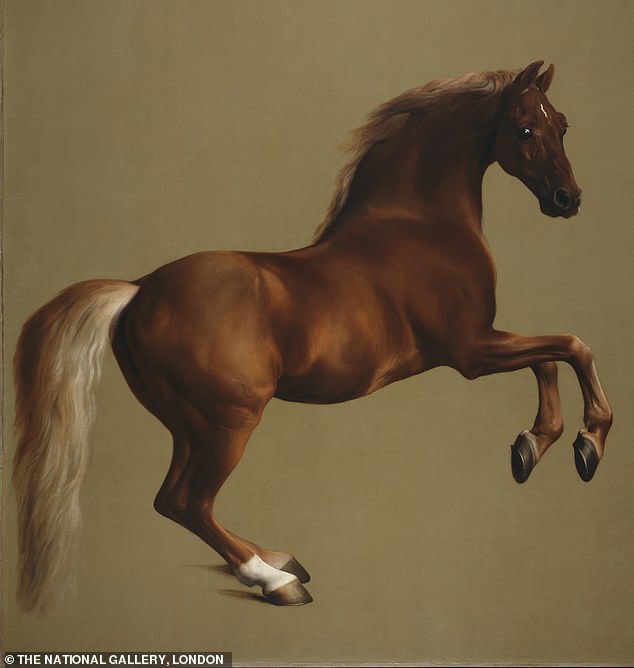 In Whistlejacket (c 1762), the 2nd Marquess of Rockingham’s life-size horse rears up unsaddled, his mane and tail flowing free

He was eventually driven out of Horkstow by locals who feared he was a necromancer.

Largely self-taught, Stubbs preferred to trust his own eyes rather than follow a teacher or conventional taste. In 1766 his barn drawings were published in The Anatomy Of The Horse, a book so accurate it was still used in veterinary schools in the 20th century.

With their 350-degree vision, horses make excellent guide animals for blind people who are scared of dogs. Miniature horses are used, of course.

In time, Stubbs was receiving commissions from England’s gentry to paint their steeds. In Whistlejacket, the 2nd Marquess of Rockingham’s life-size horse rears up unsaddled, his mane and tail flowing free.

Stubbs didn’t just paint his creatures with accuracy, he did so with compassion – witness the sensitivity he conveys in their large eyes. Human subjects never got the same love as equine ones.

In many ways he was an artist in the right place at the right time. The thoroughbred racehorse was a new breed in the 18th century. Aristocrats were as likely to seek portraits of their horses as of their families.

Anyone who visits this exhibition will surely enjoy the ride.