The Bush family added one more member to their ranks this weekend with the marriage of Pierce Bush to his new wife Sarahbeth Melton.

And on Saturday, several of his famous family members were on hand to celebrate his nuptials, including pregnant sister Lauren Bush Lauren, cousin Jenna Bush Hager, and W. Bush himself — who can be seen dancing up a storm to an ’80s pop hit in video taken from the party. 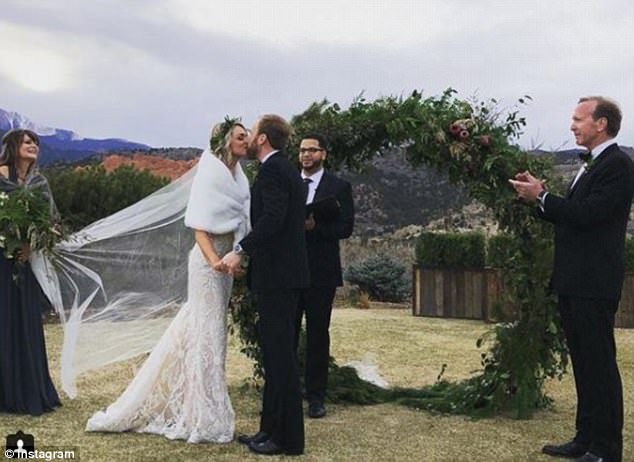 Famous family: The 32-year-old is the son of Neil Bush and his ex-wife, Sharon 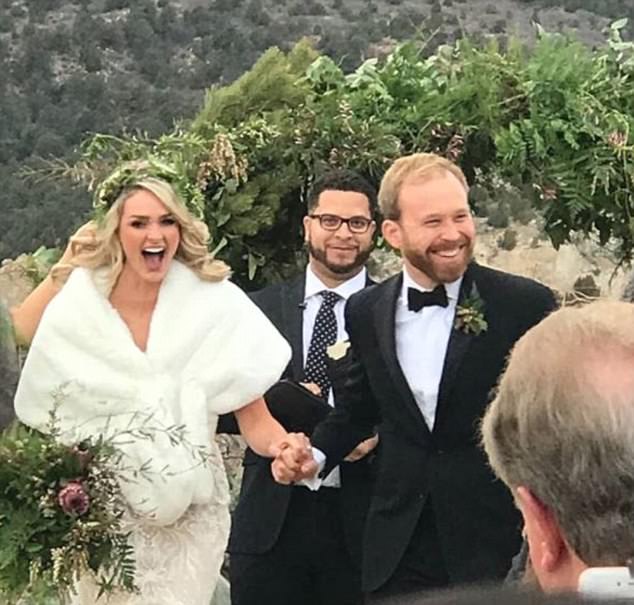 In nature: They had an outdoor ceremony at the Garden of the Gods park in Colorado Springs 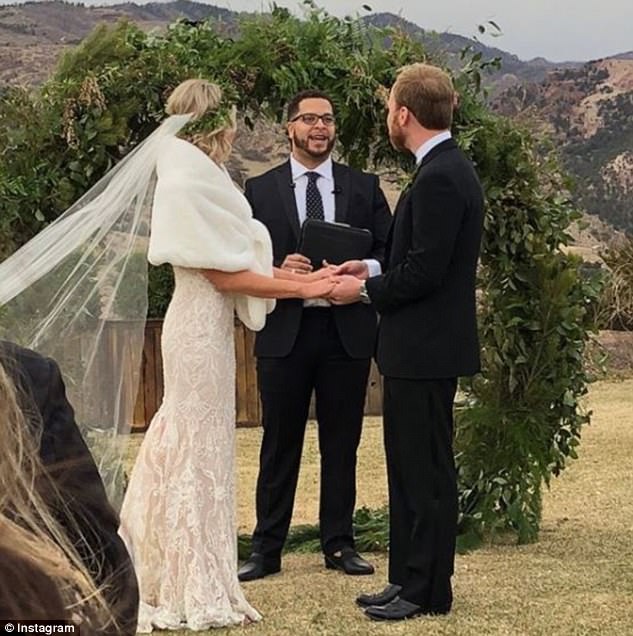 Special day: They were wed by Darryl Blackburn, who works with Pierce at Big Brothers Big Sisters Lone Star 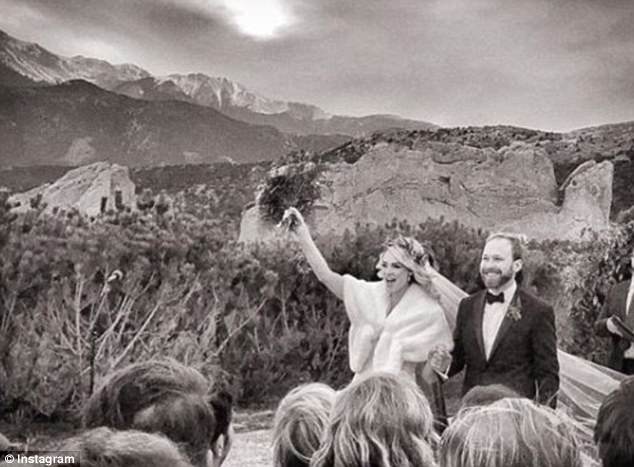 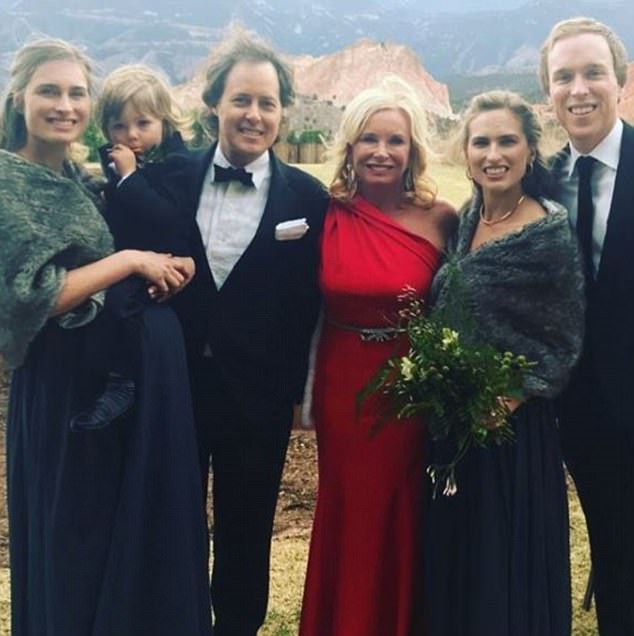 The fam’s here! Pierce’s mom Sharon (in red) posed with his sisters, Lauren (far left) and Ashley (second from right), as well as Lauren’s husband David and Ashley’s fiancé 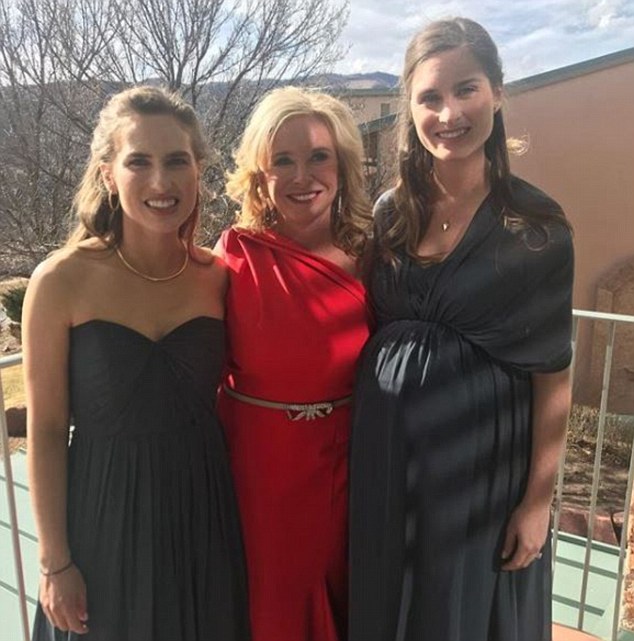 One on the way! Ashley (left) and Lauren (right) were both bridesmaids, and Lauren showed off her baby bump. She is currently expecting baby number two 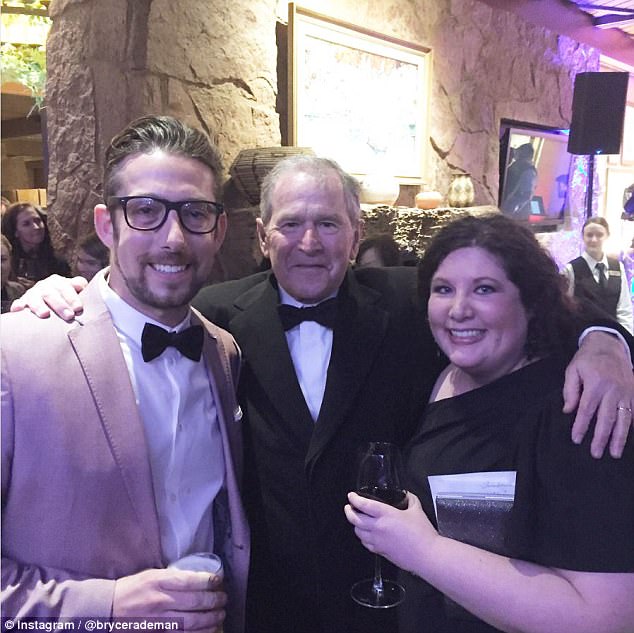 The happy couple tied the knot at the Garden of the Gods park in Colorado Springs, Colorado.

While the groom opted for a classic tux, the bride wore a stunning lace gown with a formfitting cut and plunging neckline.

The ceremony was held outside, and the weather is still a bit chilly in Colorado — so Sarahbeth topped her dress with a furry white cape. She also wore a veil, which was finished off with a leafy garland atop her head.

The whole group stood in front a large green display, with the scenic mountains making for a breathtaking backdrop.

They were wed by Darryl Blackburn, who works with Pierce at Big Brothers Big Sisters Lone Star. 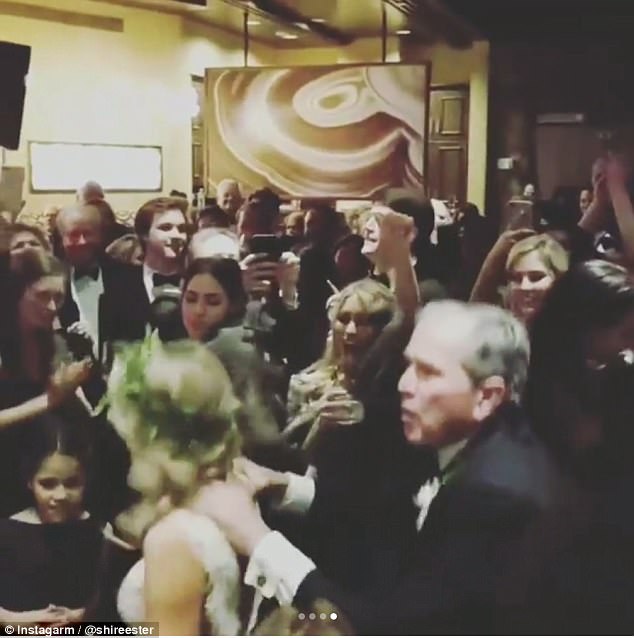 Par-tay!George W. Bush (right) could be seen dancing with the bride during the party in a video shared by a guest 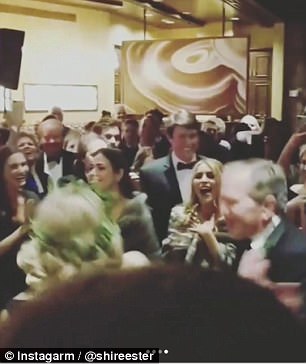 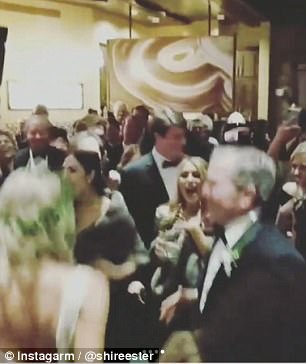 The 71-year-old, who doesn’t drink alcohol, really let loose to You Spin Me Round by Dead or Alive 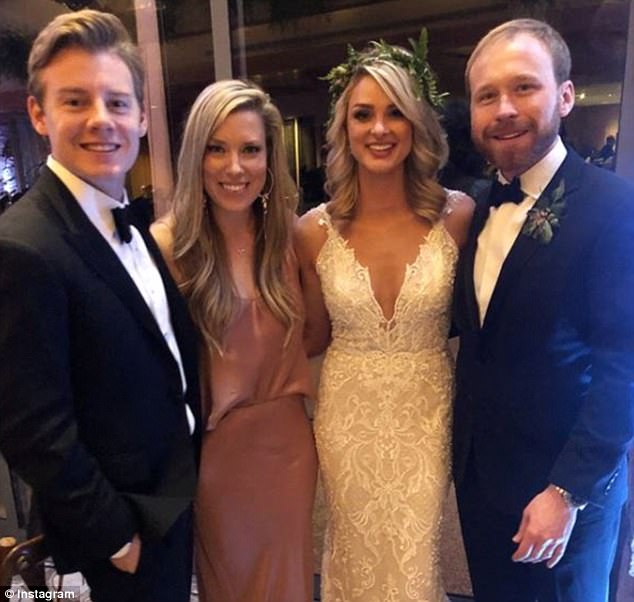 The party was held inside, where Sarahbeth kept on a leafy garland atop her head 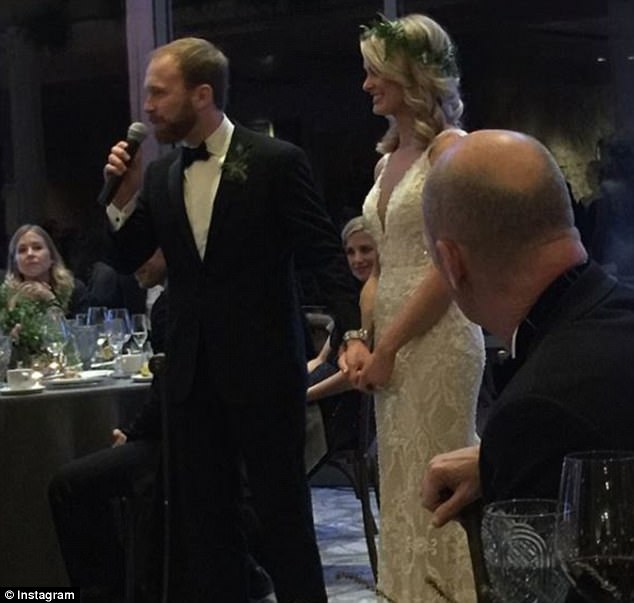 A toast! The groom even got up to say a few words to his guests at the party 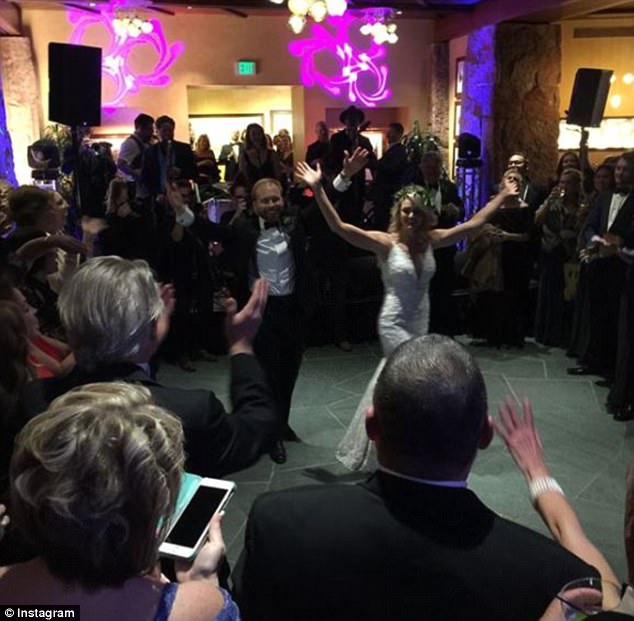 Dancing the night away! Pierce’s family took to Instagram to share loving words for him and his new wife 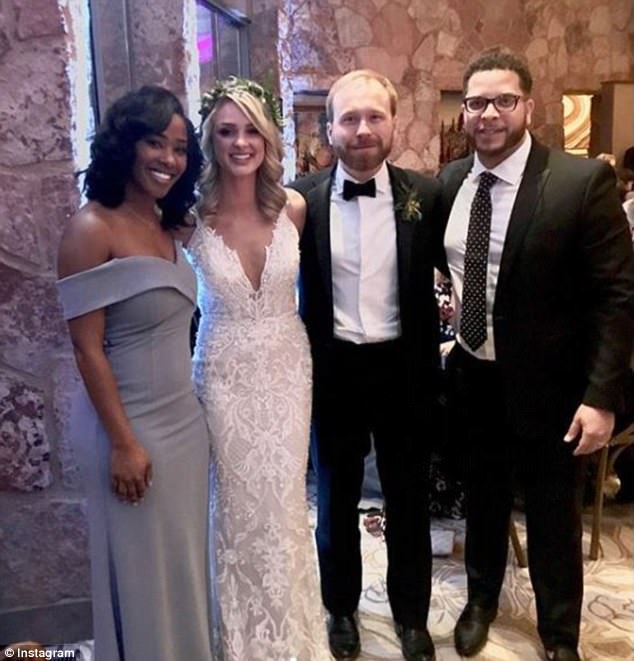 ‘I love you, Sb, and am so blessed to call you my wife!’ Pierce wrote to Sarahbeth

‘Got to marry my best friend this weekend!’ Pierce wrote on Instagram following the wedding. ‘I love you, Sb, and am so blessed to call you my wife! Thank you for lighting up my life and being such a positive force for good with everybody you meet, especially me!’

Pierce’s parents are Neil Bush and Neil’s first wife, Sharon. Neil is the fourth of George H.W. Bush’s six children, and he is brother to George W. Bush, and Jeb Bush.

While it is unclear if Uncle Jeb was in attendance, Uncle George W. was there to celebrate — and can be seen in a video recorded during the party.

In the clip, the former president can be spotted dancing enthusiastically as the live band plays Dead or Alive’s You Spin Me Round.

W. Bush, who doesn’t drink alcohol and has spoken openly about his past issues with alcohol abuse, clearly did not need any liquid courage to let loose on the dance floor. The 71-year old can be spotted dancing in front of the bride, vigorously grooving to the ’80s pop tune.

It’s also unknown whether his paternal grandparents attended, though they very well may have stayed home.

In fact, George H.W. and Laura Bush skipped Pierce’s sister Lauren’s wedding to David Lauren in 2011, which was also held in Colorado on Ralph Lauren’s ranch. 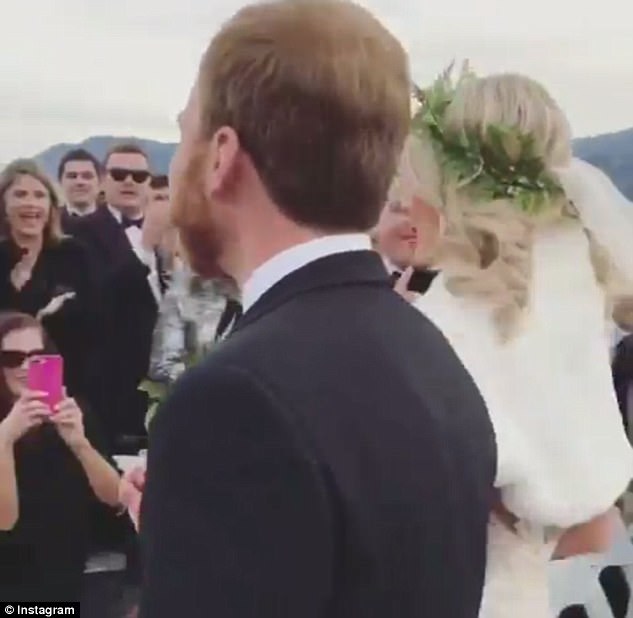 Spot her! Pierce’s cousin Jenna could be seen in photos and video from the day (back left) 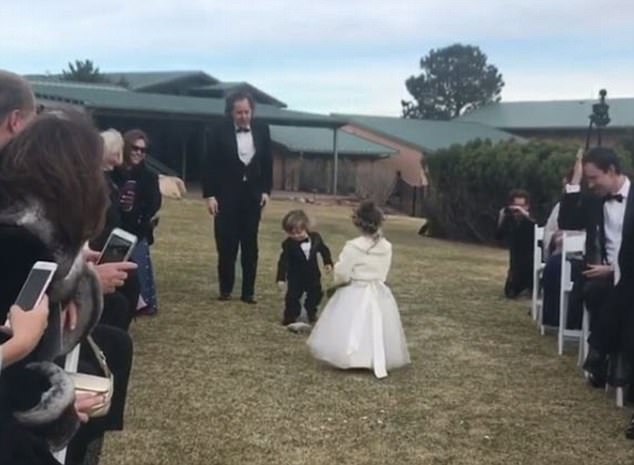 Bringing the bling! Lauren’s son James, who is Pierce’s nephew, was the ring bearer 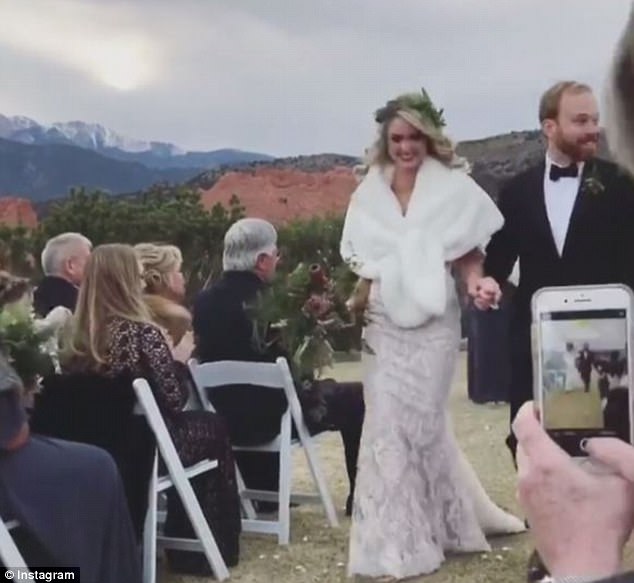 Decisions, decisions! While the groom opted for a classic tux, the bride wore a stunning lace gown with a formfitting cut and plunging neckline 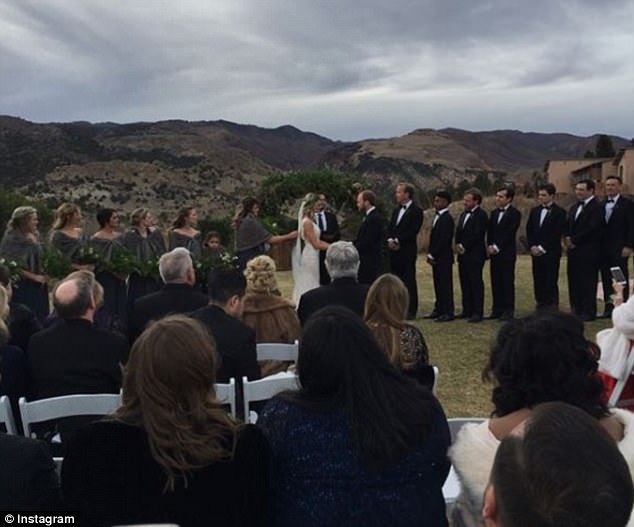 They do! They had a large bridal party who stood outside in front of a crowd 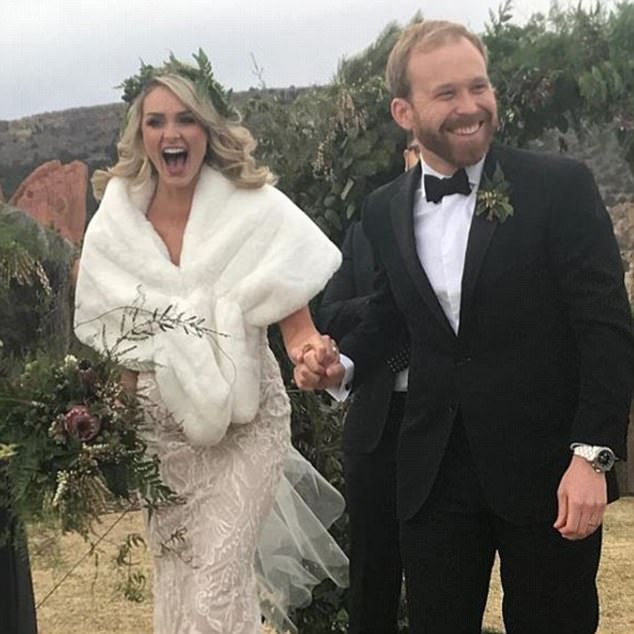 Brrr! The bride wore a furry cape to keep warm outside in the Colorado cold 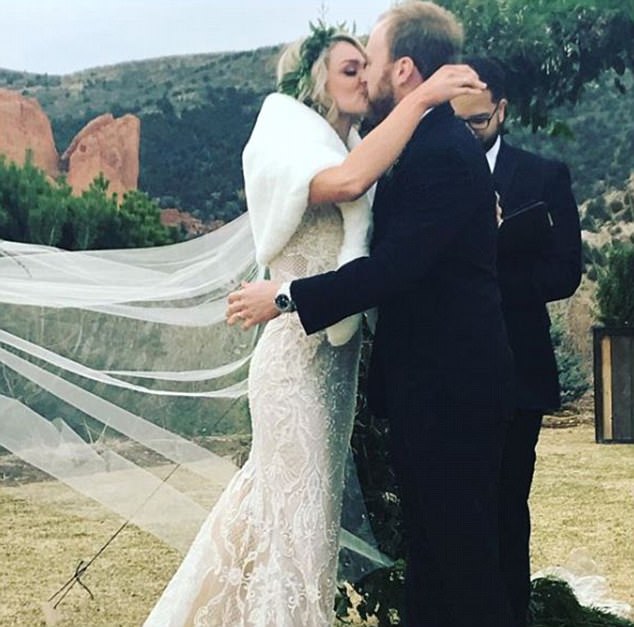 Both of the groom’s parents shared kind words on Instagram. Pierce’s father Neil wrote that nothing can make ‘me more happy than to see this amazing couple married in an incredibly beautiful and touching ceremony’

Tensions have existed in the Bush family since Neil divorced his first wife Sharon in 2003, after 23 years of marriage. The collapse of their relationship ended in a series of bitter court battles, which dragged the name of the family through the mud.

Sharon later returned to court to try to get more than her $30,000 a year settlement out of her ex-husband, but a judge refused her request.

However, Lauren herself was there for her brother’s big day — as was Lauren’s husband David and their son James. James, who is two, served as ring bearer at the ceremony.

‘Beyond happy for my brother Pierce and his beautiful bride Sarahbeth who tied the knot in the majestic Rocky Mountains yesterday!’ Lauren wrote on Instagram. Later, she commented on her brother’s picture: ‘SO much love for the happy couple! Loved celebrating with you both in the beautiful Rocky Mountains!’

Pierce’s parents also shared some kind words, with his father Neil writing on social media: ‘Talk about happiness… Nothing can make Maria and me more happy than to see this amazing couple married in an incredibly beautiful and touching ceremony over a weekend of celebration.’

‘Can’t wait to see what my beautiful grandchildren will look like! So much love to you both,’ wrote mom Sharon. 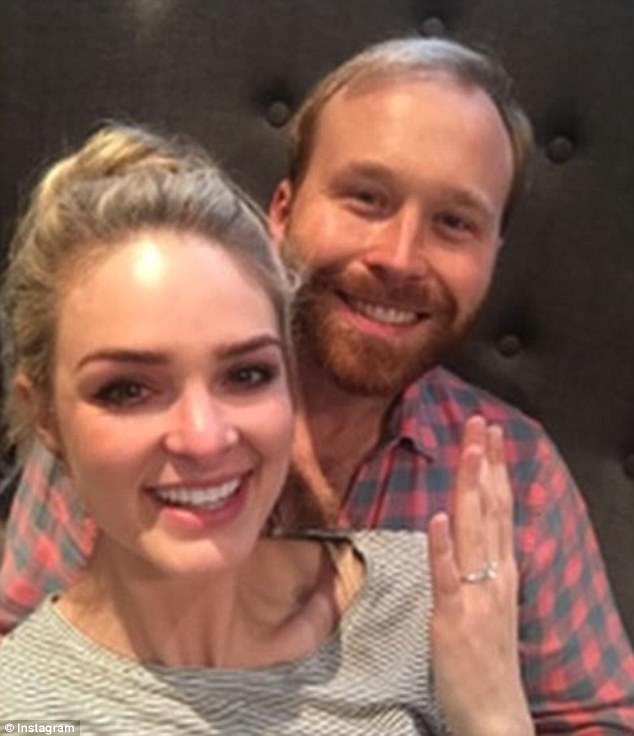 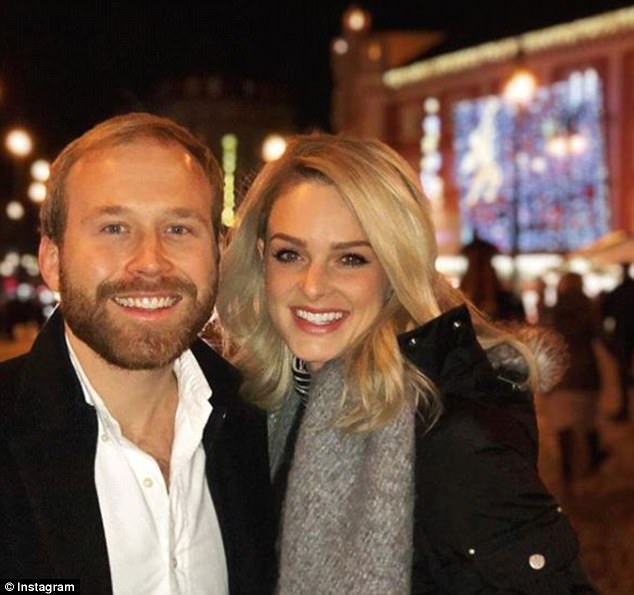 So in love! Sarahbeth has already changed her last name on Instagram 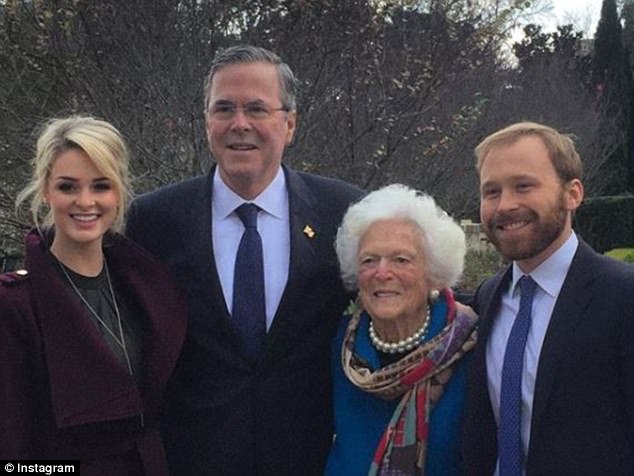 Family time: Pierce is the nephew of Jeb Bush (pictured in 2016) and George W. Bush. is grandparents, George H.W. and Barbara Bush, skipped his sister Lauren’s wedding in 2011 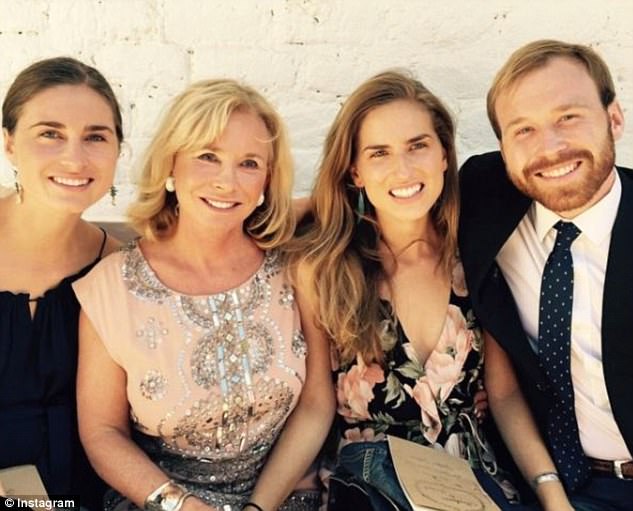 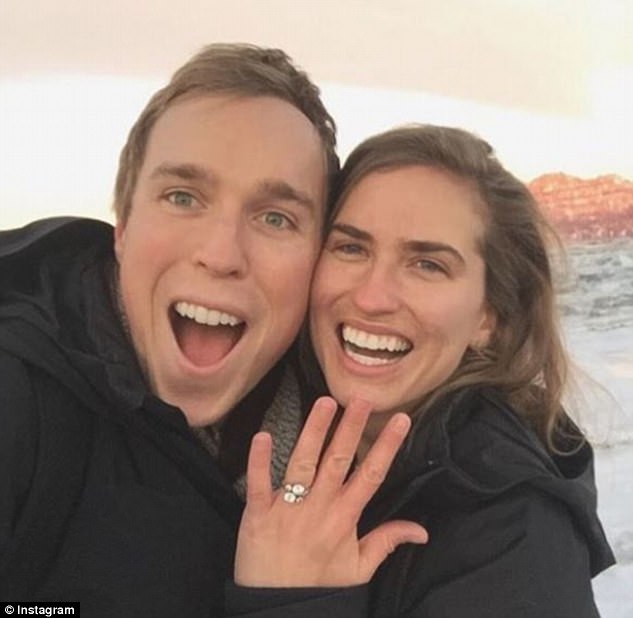 Next up: Ashley also got engaged recently, saying ‘yes’ to Julian LeFevre in December

After the ceremony was held outsides, guests moved indoors for a reception, where the groom himself got up to say a few words.

Pierce and Sarahbeth got engaged in May of last year, and Pierce happily announced the good news on Instagram.

‘Popped the [question] and she said YES!!! I am a very lucky guy to marry SB!!!! She is incredibly beautiful, courageous, kind, funny, wise, and carries out everything in life with an attitude of abundant love!!’

Neil’s other sister, Ashley, is also getting married soon. She and her soon-to-be-husband, Julian LeFevre, got engaged in Iceland in December.