George Zimmerman says he is $2.5M in debt and does not have a job

George Zimmerman is back in a Florida courtroom as he faces a criminal charge for stalking in Seminole County.

The good news for Zimmerman is the stalking charge is only a misdemeanor, which means that he is looking at no more than a year in jail and a $10,000 fine.

The bad news for Zimmerman is he has no way to pay that fine, as he filed an application requesting a public defender because he is $2.5 million in debt.

He states in that application that he has no cash, savings, checking account, investments, equitable property or a job.

The 34-year-old Floridian also has no income and does not receive unemployment or social security.

Zimmerman was not required to explain how he spent $2.5 million in the documents, which was enough to land him a public defender in the case.

Rock bottom: George Zimmerman is $2.5 million in debt, has no cash, savings, checking account, equitable property, job or source of income he says in court docs 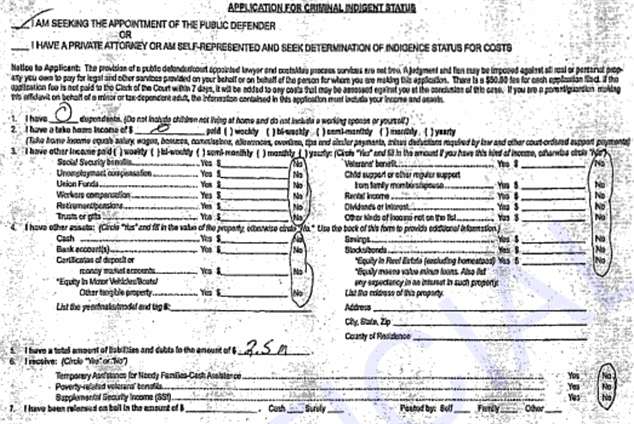 No money, no problems: Zimmerman did not have to explain just how he managed to spend $2.5 million, and his application for a public defender was granted by the court

This all stems from an incident last year when Zimmerman lashed out at private investigator Dennis Warren over the Christmas holiday.

Warren told police he had wanted to see if Zimmerman wanted to be interviewed for a documentary about Trayvon Martin and reached out to the him with a phone call.

In that report, obtained by DailyMail.com, Warren stated that he called Zimmerman once in September and left a voice message.

And all in just nine days.

Those texts came after Zimmerman heard that Warren had also reached out to his uncle about the documentary, Rest in Power: The Trayvon Martin Story.

That project was being developed by the Weinstein Company, with Jay Z producing and a script that is partially based on Lisa Bloom’s book, Suspicion Nation: The Inside Story of the Trayvon Martin Injustice and Why We Continue to Repeat It.

When Zimmerman learned about Warren’s outreach he texted one of the film’s producers, Mike Gasparro, and said: ‘Help Mrs. Warren out and give him a heads up, I’m going to find him. And I’m bringing hell with me’

Court records also reveal he later sent another message, reading: ‘DENNIS IS A F****NG PUSSY WHO BOTHERED MY UNCLE IN HIS HOME … He’s well on his way to the inside of a gator as well, 10-4?’

And it did not stop there, with Zimmerman then texteing Wareen directly, writing: ‘Answer your phone, P****!’ and “I’ll see you before you realize it.’ 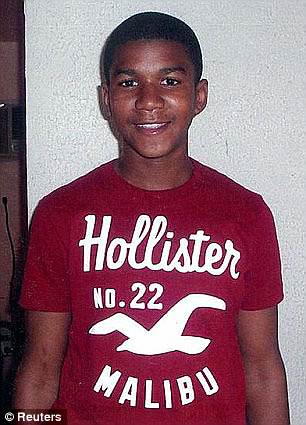 Zimmerman was angry over a Trayvon Martin documentary  (Martin above)

He also threatened to show up at Warren’s home, feed him to an alligator (again) and sent a link to a story in which he stated: ‘I know how to handle people who fuck with me, I have since February 2012.’

That was when Trayvon Martin was killed by Zimmerman.

Warren eventually told police and when an officer called to speak with him, court documents claim that he said: ‘You f***ing c***, what do you want?’ and ‘What are you calling me for you f***ing whore?’

When the officer asked Zimmerman if he was aware of who he was talking to, he replied: ‘You are the f***ing blonde c*** who arrested me on Samantha [Scheibe, his ex].’

He then added: ‘You have been involved with me since that Martin kid.’

The 34-year-old was accused of murdering Martin, a 17-year-old unarmed black teenager, in Sanford, Florida in February 2012, but he claimed he had acted in self defense.

The Department of Justice cleared him of Civil Rights violations in connection with youngster’s death earlier this year – and Zimmerman responded by saying he did not feel guilty for the killing.

‘Only in a true life-and-death scenario can you have mental clearness to know that you cannot feel guilty for surviving,’ he said in a video released by his law firm.

Since his acquittal, Zimmerman has been arrested several times by Lake Mary police.

In July 2013, just weeks after his acquittal, he was pulled over for speeding in Texas and had a firearm in the glove compartment of his vehicle.

‘Don’t play with your firearm, OK?’ an officer told him before he was sent away with a warning.

In September 2013, his estranged wife, Shellie Zimmerman, called 911 and claimed he had attacked her father and threatened he with a gun. She decided to not press any charges.

Then in November 2013, Zimmerman was arrested for domestic violence against his new girlfriend, Samantha Scheibe. She later dropped the charges.

Nearly a year later, in September 2014, Zimmerman was arrested for the road rage incident involving Apperson.

And in January, he was arrested for allegedly hurling a wine bottle at his girlfriend during a domestic dispute. No charges were filed in that case.

Then, in May of 2015, Matthew Apperson was arrested for firing a gun at Zimmerman while he sat in his car. Zimmerman avoided being shot and only suffered minor injuries.

Apperson was charged with attempted second degree murder and used Florida’s ‘stand your ground defense’ – the same defense Zimmerman used in his trial when charged with Martin’s murder.

He was found guilty and sentenced to 20 years in prison.