Stetson Bennett threw two touchdown passes and ran for two scores in the first half as No. 1 Georgia demolished No. 3 TCU 65-7 Monday night to become the first team to win consecutive College Football Playoff national championships.

The Bulldogs (15-0) became the first repeat champs since Alabama went back-to-back a decade ago and left no doubt that they have replaced the Crimson Tide as the new bullies on the block.

TCU (13-2), the first Cinderella team of the playoff era, never had a chance against the Georgia juggernaut. Unlike Michigan in the Fiesta Bowl semifinal, the Bulldogs would not succumb to the Hypnotoads’ spell.

Georgia turned in one of the all-time beatdowns in a game that decided a national title, reminiscent of Nebraska running over Florida by 38 in the 1996 Fiesta Bowl, USC’s 36-point rout of Oklahoma in the 2005 Orange Bowl and Alabama’s 28-point BCS championship blowout over Notre Dame in 2013.

But this was worse. 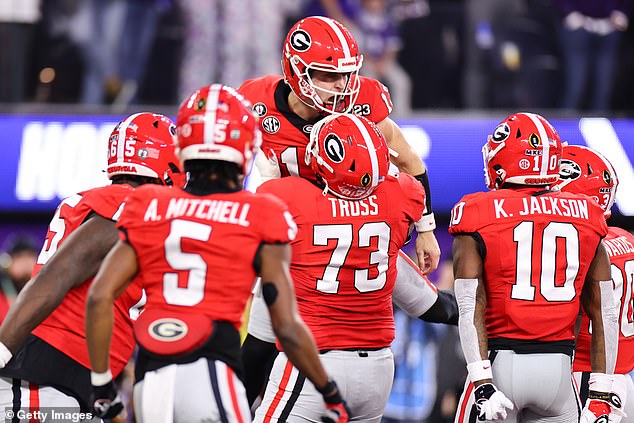 Too much talent. Too well-coached. Two straight titles for coach Kirby Smart’s Dawgs.

No team has ever scored more points in a national championship game, dating to the beginning of the BCS in 1998.

With 13:25 left in the fourth quarter, coach Kirby Smart called timeout in the middle of an offensive drive so Bennett could exit to hero’s ovation in the final game of his circuitous college career.

He finished 18 for 25 for 304 yards and four touchdown passes, adding two on the ground. 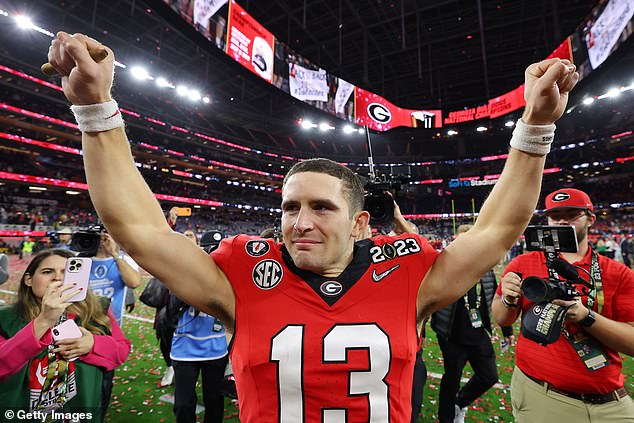 Bennett threw for four touchdowns, 304 yards on 18/25 in his second CFB championship win

Bennett walked on at Georgia nearly six years ago at the beginning of the Bulldogs’ growth into college football’s most dominant program.

While Bennett’s unlikely journey traces the path of the Bulldogs’ recent past, Brock Bowers epitomizes Georgia’s present and future as a powerhouse team stacked with superb talents who have known nothing but championships for two incredible years.

The quarterback’s remarkable connection with his tight end was on display throughout and that chemistry played a major role in making sure the Bulldogs became champions again.

Bowers finished with seven catches for 152 yards and a touchdown from Bennett, including a 22-yard TD catch that firmly shut the door on the Horned Frogs in the third quarter of this epic blowout. 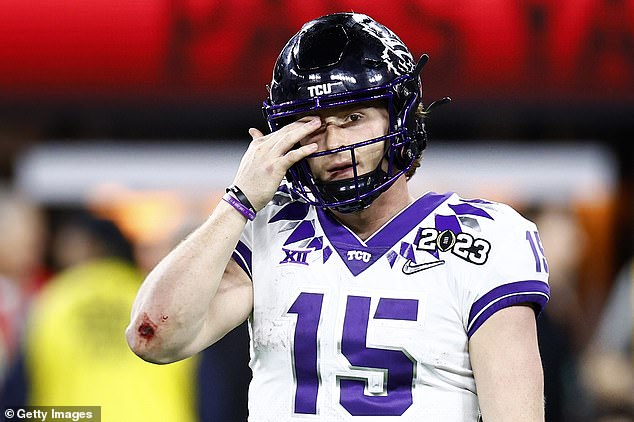 Bennett is more than five years older than Bowers, but the quarterback has bridged that modest generation gap to form a partnership that got one last national showcase at SoFi Stadium.

In the first half, Bennett became the first player in Georgia´s lengthy history to rack up 4,000 total yards of offense over his career with plenty of help from Bowers. He also broke Aaron Murray´s single-season yards passing record for the Bulldogs in the first half, an appropriate punctuation to a season in which the Bulldogs broke open offenses early with passing before running their way to victories.

Bennett is older than five starting quarterbacks of current NFL playoff teams, but he finished 29-3 as a starter at Georgia. Bennett joined Matt Leinart and A.J. McCarron as the only quarterbacks to lead their teams to back-to-back national championships in the 21st century when Georgia became just the fourth team to repeat since 1980. 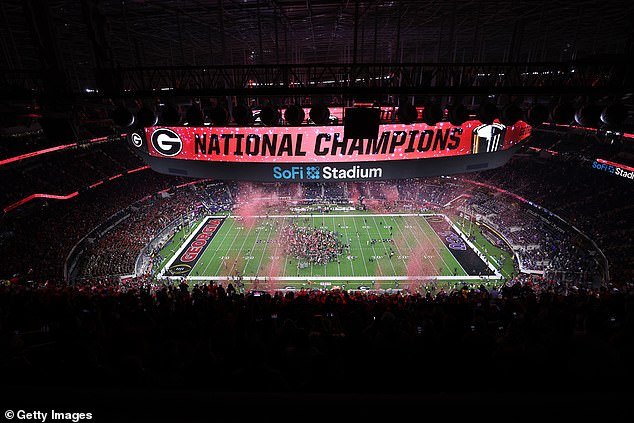 The Dawgs were dominant from kickoff, with lineman enjoying chicken wings on the sideline

Bowers’ decision to move from Northern California to Athens and his subsequent growth into a football juggernaut inspiring comparisons to Travis Kelce is a prime illustration of what Georgia has become in the past few seasons – a national powerhouse that can snare players from every corner of the map and turn them all into stars.

Bowers, a 6-foot-4 multi-sport athlete with freakish speed for his size, has been a spectacular success since arriving at Georgia in 2021. He has led the Bulldogs in receiving for two straight years, playing multiple roles and causing innumerable headaches for opposing defenses with his strength, speed and versatility.

Until late in the third quarter of the title game, Bowers had more yards receiving than TCU’s offense had total yards.

By the time the game reached its final moments, Georgia offensive linemen were snacking on chicken wings on the sideline. 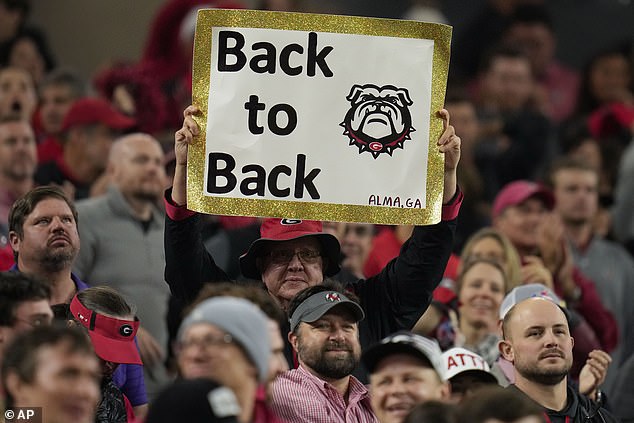 The Bulldogs were a different kind of dominant this season: not quite as stingy on defense, but more explosive on offense.

Earlier in Smart´s tenure at his alma mater, Georgia fans worried about whether the former defensive coordinator for Saban would be able to build an offense to match this high-scoring era of college football.

Under third-year coordinator Todd Monken, the Bulldogs have become prolific, creative and diverse offensively. They picked TCU´s 3-3-5 defense from all angles.