A Georgia Southern University graduate who was left paralyzed from a routine neck adjustment at a chiropractor is now able to move both sides of her body as she makes a slow but miraculous recovery.

Caitlin Jensen, 28, was hospitalized on June 16 after an appointment with Dr. TJ Harpham, 42, left her with four ruptured arteries that led to a stroke and three heart attacks.

After being moved to Atlanta’s Shepherd Center this week to begin her physical therapy, her family says Jensen has made remarkable improvement.

Darlene Jensen said although her daughter still needs a speaking valve and glasses to correct her double vision, she can now move both sides of her body as he maintains a positive attitude through days of rigorous physical therapy.

‘I’m proud that even though she has been dealt some hard blows, she wakes up every day with a beautiful smile on her face, and love in her heart,’ Darlene wrote on Frider on her Facebook page documenting her daughter’s recovery.

Caitlin Jensen, 28, is now able to move both sides of her body after being left paralyzed in June following a routine neck adjustment with a chiropractor 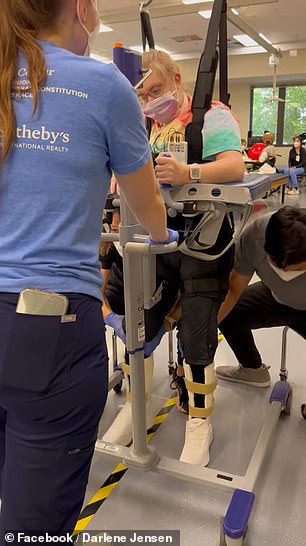 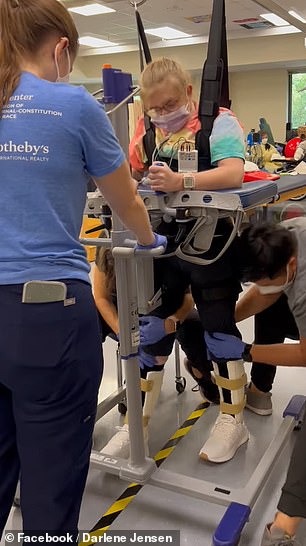 Jensen’s mother, Darlene, shared video of her daughter taking her first steps with the help of a walking harness on Friday, which only provides 20 percent support 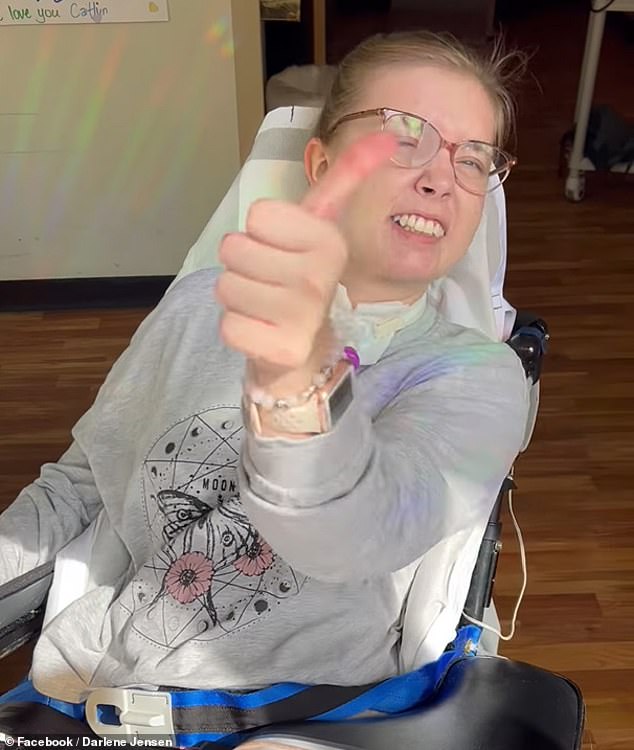 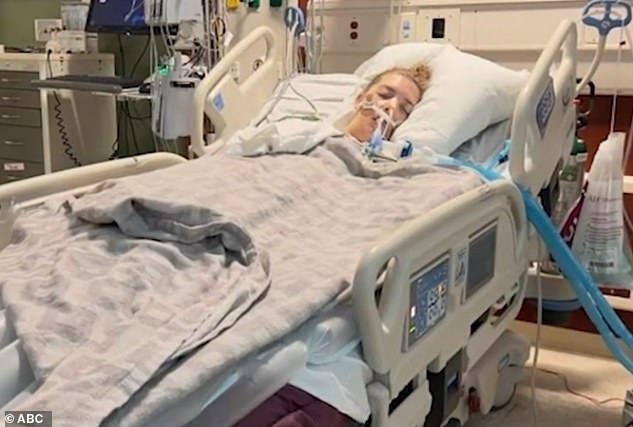 After being hospitalized in June, Jensen could only communicate with her eyes and portions of the left side of her body 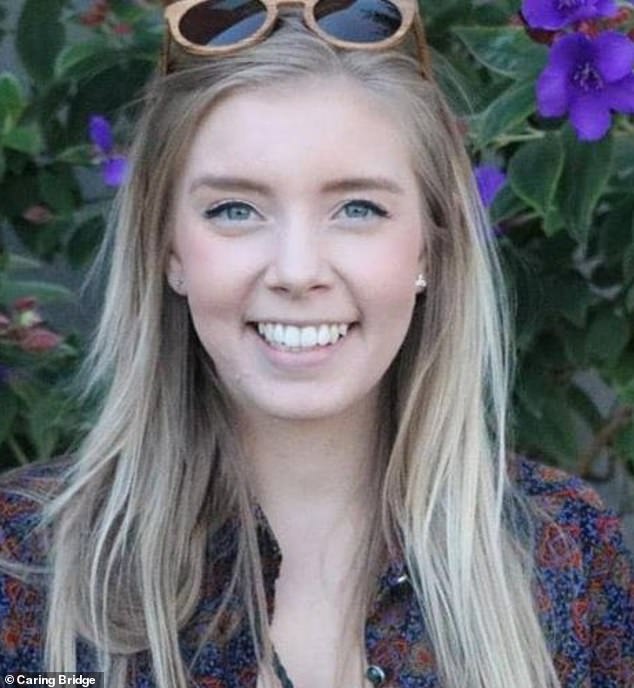 Jensen continues to battle pneumonia, and ranks the diffulties of daily life as a 10 – on a scale of one to 10, according to mother Darelene. But, she remains strictly committed to her routine at the Shepherd Center, which specializes in treatment for spinal cord and brain injuries.

Detailing her latest work on Friday, Darlene said her daughter was able to complete an hour of speech therapy using a speaking valve to help her.

The 28-year-old has been practicing to say ‘Bro,’ to surprise her brother after being able to successfully say ‘Mom,’ for the first time at the end of August.

Jensen was also able to complete sitting practices on Friday without assistance and took her first steps with a walking harness that provided only 20 percent assistance.

She then went on to take pottery classes where she could move her hands to paint a vase, and took part in a meeting about mobility solutions. 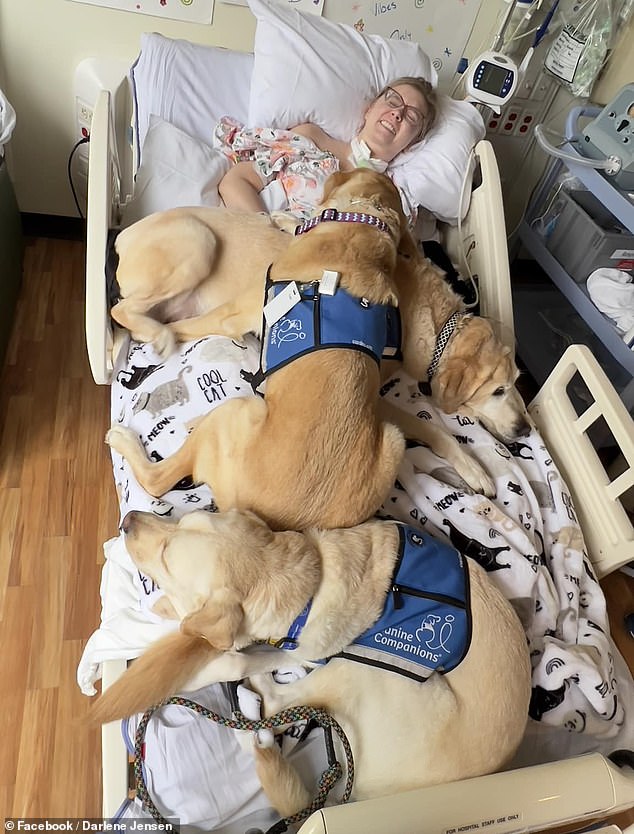 Pictured: Jensen resting happily with three service dogs on top of her 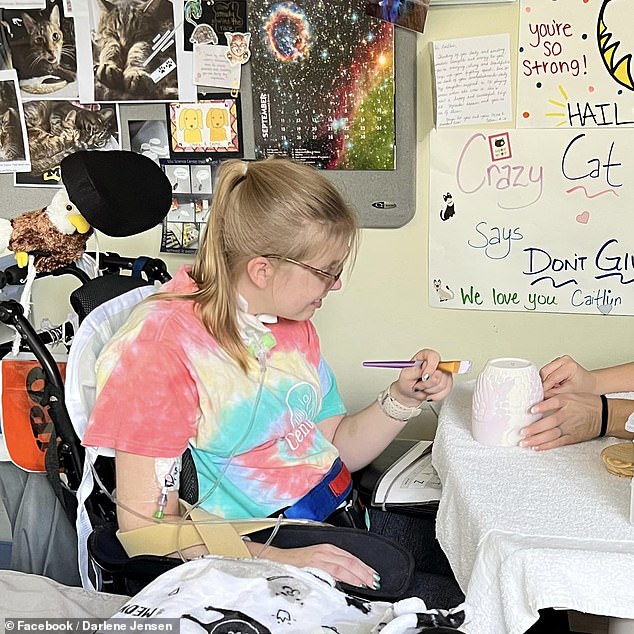 Following hard physical therapy on Friday, Jensen went to a pottery class to paint a vase 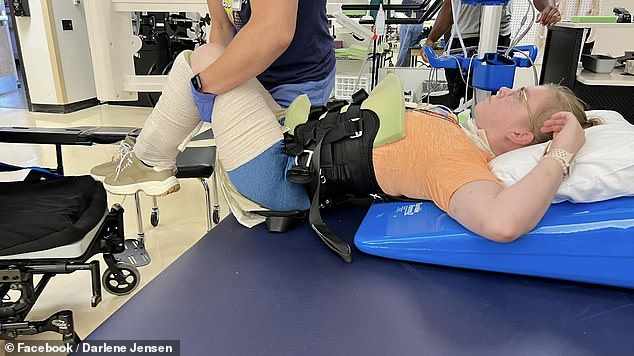 From a scale between one and 10, Jensen ranked her daily life’s difficulty at a 10, but she remains committed to completing her physical therapy routine

*** EDIT: I guess the video didn’t post earlier – it’s up now – rejoice with us!!*** I’m not crying, you’re crying!! 😭❤️‍🩹 My baby girl said “mom” with her speaking valve during speech therapy today. She’s working SO HARD. Sounds are still few and far between, but she is working really hard on building a strong foundation. I’m incredibly proud of her!! I told her that this means more than her first words when she was a baby, because I know how much it means to her. Every milestone is a major victory!! ❤️‍🩹🙏🏻🙌 #teamcaitlin 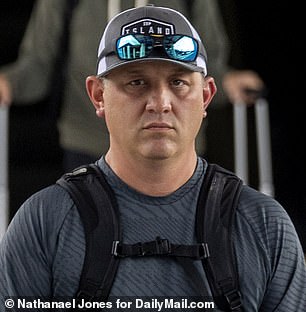 Dr. TJ Harpham, the chiropractor who treated Jensen, has repeatedly declined to comment about what happened to his patient

Darlene said Jensen would continue the new routine on Saturday and for the days to come until she recovers further.

‘I credit her a great deal for her attitude. I think that her positive spirit and attitude has really helped a lot,’ Jensen told WJCL.

She also thanked the thousands of people who have raised more than $107,000 for her daughter’s medical expenses on GoFundMe.

‘We’ve been blown away by the support and very appreciative because we do have a very long road ahead of us,’ Jensen added. ‘It helps to know those funds are there for her needs, because we don’t even know what all of her needs are going to be yet.’

Darlene previously told DailyMail.com that her daughter had been to Harpham on several occasions to address neck stiffness she was experiencing from ‘sitting at her desk for months working on her last classes,’ but had never undergone a neck adjustment.

‘You don’t think that a 28-year-old healthy woman is going to be having such an emergency and having a stroke,’ she said.

Working on “BRO” (for Caleb) in speech therapy! 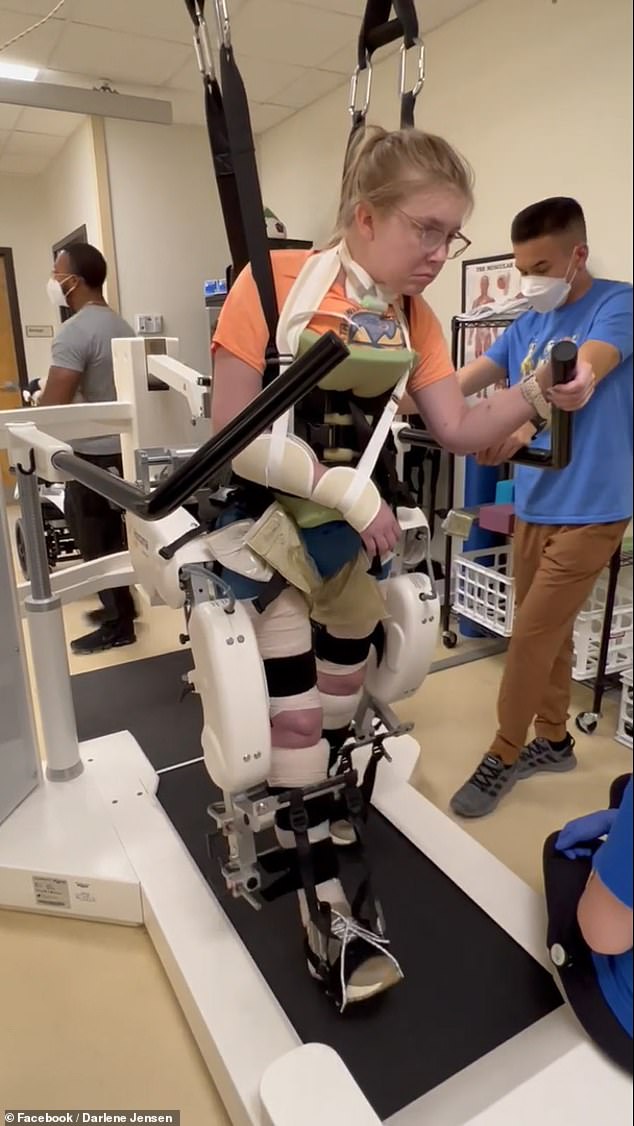 Thousands of people have raised more than $107,000 for her Jensen’s medical expenses on GoFundMe, where Darlene posts regular updates about her daughter

Darlene previously recalled the shocking call she received from Harpham on her daughter’s phone.

Harpham has repeatedly declined to comment on the incident.

Darlene said she was by her daughter’s side when her heart stopped for 10 minutes.

Harpham has repeatedly declined to comment on the incident.