A Georgia family says police officers opened fire at a car containing five children ages nine to 16, shooting at the three youngest children as they exited the car and ran, before hitting the car itself and arresting the their two older brothers.

The Georgia Bureau of Investigations said in a statement that Georgia’s Waycross Police Department called them in to investigate an officer involved shooting that occurred in Waycross on Saturday at about 8am.

According to the GBI’s preliminary investigation, the incident began when Waycross officer saw a traffic violation at a cross street and attempted to get the car’s license plate number. 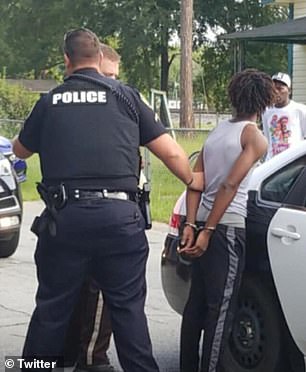 A Georgia family said that officers shot at a car containing five children, ages nine to 16, before arresting the two eldest children (left). A 15-year-old (right) was wounded during the arrest 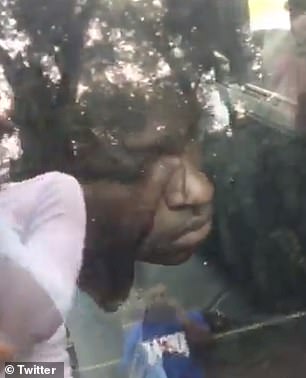 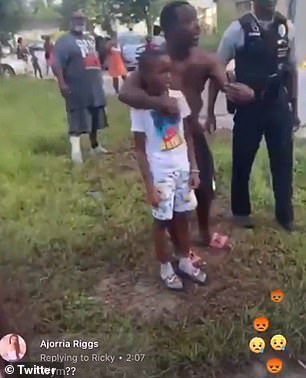 Video from the arrest shows the 15-year-old boy with blood dripping down his head. The boy’s father (right) is pictured here during the arrest as it happened

As the car approached another cross street, however, three children – ages nine, 12 and 14 – were seen getting out of the car and running away.

A second officer arrived at the scene as backup, while first officer followed the three children in his cruiser.

The second officer was said to have approached the car the children where in from the front, when the car drove towards him, at which point the officer shot at the car multiple times.

Two teen boys – ages 15 and 16 – were said to have gotten out of the car while it was still in drive.

After hearing the gun shots, the first officer returned to the scene where the car was stopped. The three running children were said to have gone home.

While the 15- and 16-year-old boys were being arrested, police said there was an altercation between the second officer and the 15 year old, which left him with minor injuries that needed to be treated by EMS.

Waycross Police Department in Ware County, Georgia is under fire after allegedly shooting at an unarmed 9-year-old and 12-year-old.  pic.twitter.com/MIRxVaPZDp 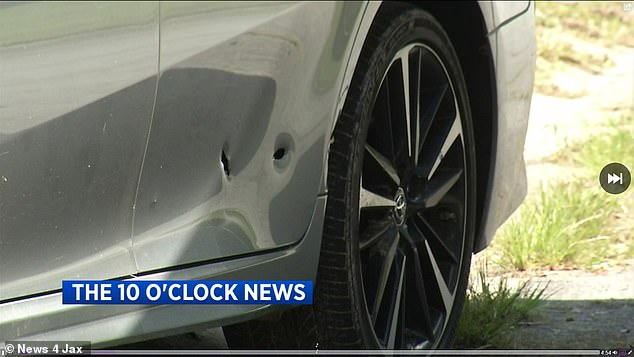 News footage shows apparent bullet holes in the car’s rear door, stemming from an officer shooting at the car while the two older brothers were still inside it 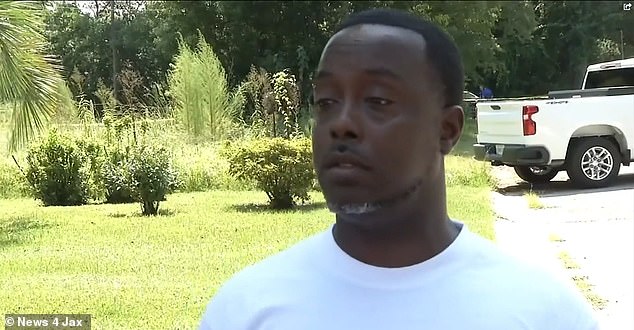 The children’s father, Dominique Goodman Sr. (pictured), was heard in a video pleading for police not to shoot his two children during the arrest

In dramatic video of the boys’ arrest, the five children’s father, Dominique Goodman Sr., and a woman can be heard begging the police officers not to shoot his two sons as they’re lying face down in the dirt road.

‘My kids, man! Those are children man! They’re minors man!’ Goodman shouts as he approaches the intersection where his sons are being arrested.

‘You’re not going to shoot them, please!’ a woman standing nearby shouts at the officers.

The three younger children – a nine-year-old boy and 12 and 14-year-old girls – told News4Jax that they were on their way back from Walmart when they saw an officer following them.

They said that the officer didn’t turn his cruiser lights on to pull them over until they were nearing their own neighborhood, at which point their older brothers – the 15 and 16 year olds – got scared and told them to get out and run home to get their dad.

When the younger three children exited the car and started running, they said an officer started shooting at them.

The nine-year-old boy said that the officer fired at least seven bullets and one of them got close to his head.

‘It went past my face,’ he told the news station. ‘I could have gotten shot in my face, but they shot the swing.’

Video footage of the car the children were in shows apparent bullet holes in the rear passenger door.

Goodman said that the family was supposed to be heading off together to go to a football tournament that two of the children were playing in Jacksonville, Florida, that morning.

But, he said, the kids got excited, ‘jumped the gun’ and left early, without telling him.

The incident with the police occurred on the drive back home from Walmart.

Video footage also showed the 15-year-old boy sitting in a police car with blood on his face.

The teen later told News4Jax that he wasn’t sure why they were pulled over because they weren’t speeding. He also claimed that during the arrest, while he had his hands up, a police officer hit him in the eye with his gun and another officer tasered him in the back.

The family said that the two teen boys were taken to the police station and held for hours.

Authorities told News4Jax that the teen boys were arrested ‘based on circumstances surrounding the incident’ and that they are now facing several charges.

Police said the 16 year old has been charged with possession of a handgun by a minor, reckless driving, aggravated assault on a police officer, driving without a license and a stop sign violation.

The 15 year old, meanwhile, is charged with possession of a handgun by a minor, felony obstruction of an officer and removal or attempt to remove a firearm from an officer.

The two officers involved in the incident have been placed on administrative leave pending the outcome of the investigation.

The NAACP’s Atlanta chapter is asking that police release the body and dash cam footage immediately so they can carry out their own investigation into what happened.

‘I’m very concerned that shots were fired while children were involved,’ Atlanta attorney Gerald Griggs, VP of the NAACP Atlanta chapter, told the Atlanta Journal-Constitution. ‘We’re concerned that level of force was used.’

The GBI is still investigating and has asked that anyone with information about what happened call the GBI at 912-389-4103 or the Waycross Police Department at 912-287-2921.