A few years ago, Private Eye published an ‘all purpose interview’ with former contributor Gerald Scarfe, which read: ‘Acid pen… biting satire… Sixties… Private Eye… asthmatic childhood… Jane Asher… cakes… vitriol…Cheyne Walk… intensely private… marked contrast… Sixties… cakes…’ It is to Scarfe’s credit that he includes this joke in his autobiography, as it encapsulates much of the book – apart from his wife Jane’s cakes.

Our most famous living political cartoonist, often compared to Hogarth (not by Scarfe himself), has written a sweeping account of his 83 years, encompassing several wars, Fleet Street, the stage, rock ’n’ roll and Hollywood. He also analyses his drawing methods while revealing what makes his eye so good – a virtually photographic memory.

After an asthmatic, bed-ridden, wartime childhood, the self-taught commercial artist’s story took off when he arrived at Private Eye in 1963. His drawing of a naked Harold Macmillan adopting the iconic seated pose of Christine Keeler propelled Scarfe into the cartooning stratosphere. Gone were the days of drawing furniture and submitting gags to Punch as he was wooed by Time magazine and the Daily Mail (which won him over with an E-Type Jag and free petrol). 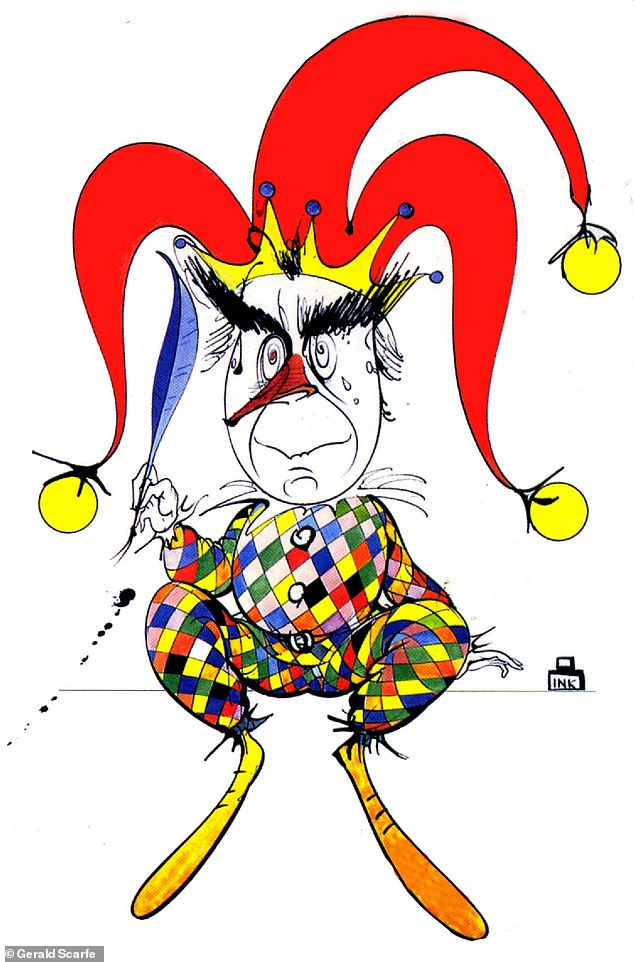 In Long Drawn Out Trip, Gerald Scarfe (above, in a self-portrait from 1988), our most famous living political cartoonist, has written a sweeping account on his 83 years

Suddenly he was despatched to draw The Beatles, Arthur Miller, Rothko, Robert Oppenheimer – while following the US election – ‘Hi Gerry, are your pencils sharp today?’ quipped Richard Nixon. He also found time to cover the Vietnam War, producing rep-ortage drawings.

These are some of the book’s best chapters – his account of riding in a US army helicopter over the jungle evokes Apocalypse Now. Then he’s off to the Six-Day War and then back to Northern Ireland for The Troubles, when his hire car was hijacked by the IRA.

Inevitably, telly beckoned – and soon he was directing documentaries, winning a Bafta, experimenting with animation, creating opera and theatre sets, winning an Olivier Award, working with Pink Floyd and ultimately designing the film Hercules. The child who was once enraptured by Pinocchio was now fêted by the Disney colossus. 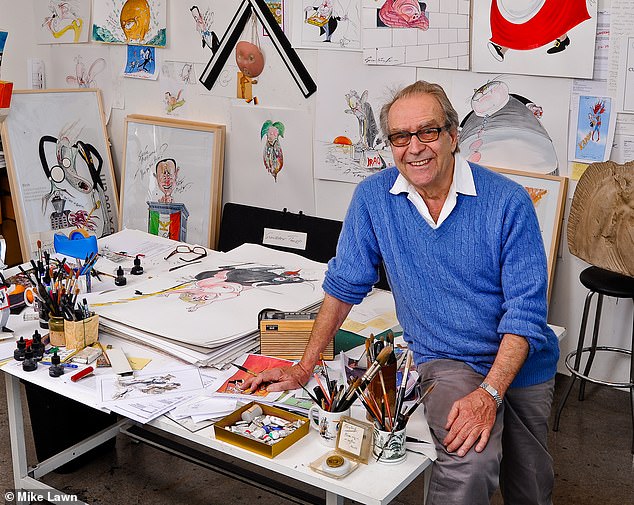 Despite being a memoir of an artist, surprisingly few of his drawings feature in the book and this does detract from its appeal. Above: The artist in his Chelsea studio

As the scourge of the Establishment joined the Establishment (dining with Princess Margaret after drawing her as a warthog), Scarfe (CBE) fretted about his ‘art’. His contemporary, David Hockney, pops up throughout – first when a teenaged Gerry beat him in an Eagle comic drawing competition, and later when Hockney beat Gerry to a design commission at Glyndebourne.

One suspects that for all Scarfe’s huge success, he would rather be considered a ‘proper’ artist like Hockney than a political cartoonist who can be sacked. When this happened to him at The Sunday Times, he felt it bitterly.

However, there’s something missing – Scarfe’s artwork. I would like to have seen his war reportage, the sculptures he produced for Time or the gags he drew for Punch. He says in his introduction, ‘the strongest memories are brought back by looking at my drawings’ but these are mostly absent.

Otherwise, this is a fascinating and surprisingly gentle read, from a man famed for his venomous nib. The only non-politician he apparently dislikes is comedian Rowland Rivron. Perhaps he’s been sweetened by the cakes.

Forget Google or Apple: the most powerful corporation in history was founded in 1599 by a motley group of London merchants who included grocers, vintners and haberdashers. ‘The East India Company has, thankfully, no exact modern equivalent,’ William Dalrymple writes. ‘Walmart, the world’s largest corporation in revenue terms, does not number among its assets a fleet of nuclear submarines; neither Facebook nor Shell possesses regiments of infantry.’

The East India Company (EIC) grew to control almost half the world’s trade and rule over a sub-continent, backed by a vast private army larger than that of the British Crown. But the initial aims seemed modest enough when Queen Elizabeth I granted its royal charter: to import Indian tea, textiles and spices, and sell them at a profit.

The first task was to cultivate the Mughal emperor, Jahangir, who ruled over most of India and Afghanistan. An early envoy, Sir Thomas Roe, arrived in 1615 with presents of ‘hunting dogges’ and crates of red wine. The emperor was underwhelmed: as Roe reported back, Jahangir lived in a world of unimaginable opulence, ‘laden with diamonds, rubies, pearles… rubies as great as walnuts’.

Roe told the EIC that force was not an option when dealing with the Mughal Empire. Initially it heeded his advice. As profits rose, however, the directors began flexing their muscles – and were quick to take advantage when Mughal India fractured into small competing states. One by one, local nawabs and princes were alternatively cajoled and intimidated into becoming mere figureheads while company officials took charge.

A century after its creation, there were still only 35 permanent employees in the modest London office. Yet this skeleton staff executed what Dalrymple calls ‘a corporate coup unparalleled in history: the military conquest, subjugation and plunder of vast tracts of southern Asia. It almost certainly remains the supreme act of corporate violence in world history.’ 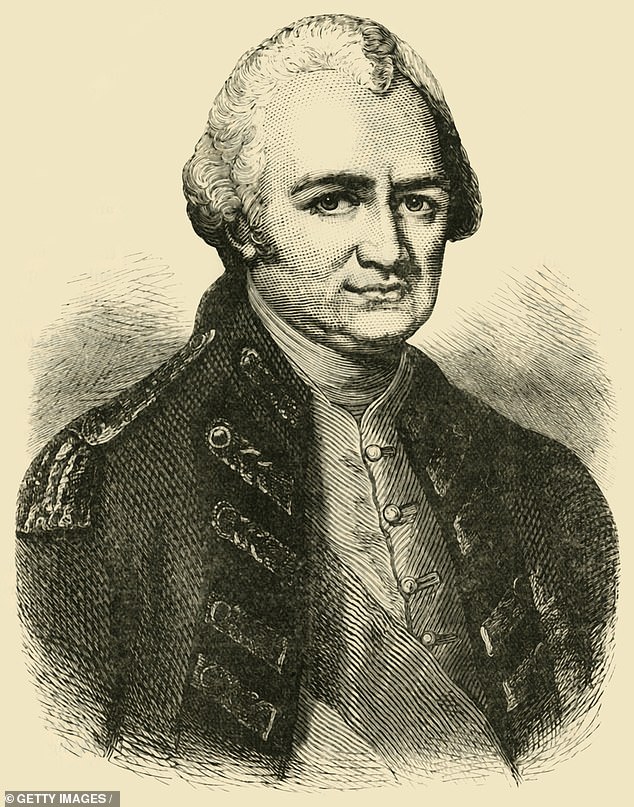 William Dalrymple’s The Anarchy is a magnificently readable depiction of The East India Company. Robert Clive, aka ‘Clive of India’ (above) exemplified the company’s imperial larceny

The author is no misty-eyed nostalgic: some of his descriptions are not for the squeamish. But don’t be deterred. This is a magnificently readable book, deeply researched and richly atmospheric, written with a historian’s understanding of power and a novelistic eye for detail. For all his moral indignation, Dalrymple cannot hide his awe at the outrageous scale of the EIC’s imperial larceny – as exemplified by the figure of Robert Clive, aka ‘Clive of India’, the anti-hero of his story.

In 1757, after leading the EIC’s troops to victory over the Nawab of Bengal and his French allies at the Battle of Plassey, Clive began plundering and asset-stripping on behalf of the company, a process known as ‘shaking the pagoda tree’. The entire contents of the Bengal treasury, worth £260 million in today’s money, were loaded into 100 boats and floated down the Ganges to the company’s office in Calcutta. Clive’s personal share of this prize was almost £25 million. At 33, he became one of the richest men in Europe.

Victory at Plassey allowed the EIC to begin seizing local tax revenues, providing the resources that enabled it to defeat a succession of rivals until it finally conquered the Mughal capital of Delhi in 1803.

But India wasn’t big enough to satisfy its appetite. The company ferried opium to China and sent Chinese tea to Massachusetts – the tea whose dumping in Boston harbour began the American War of Independence.

After the loss of America, it seemed increasingly anomalous that Britain’s most important remaining colony, India, was effectively the property of a private business. MPs abolished the EIC’s monopoly of trade with the East in 1813, and after the Indian Mutiny of 1857 they finally removed it from power altogether.

The company’s navy was disbanded, its army was passed to the Crown and all its Indian possessions were nationalised.

The East India Company is not entirely extinct, however. The name is now owned by two brothers from Kerala who sell ‘condiments and fine foods’ from a London showroom.

Dominion: The Making Of The Western Mind

No one could accuse Tom Holland of lacking ambition. Although he balks at the description, his subject here is little less than a history of Christianity, which he bundles into a provocative thesis that the modern world has been progressively shaped by the consequences of the life and death of Jesus Christ.

He covers this ground in 21 episodic chapters (roughly one for every intervening century), which expand on an often minor historical incident – such as a woman setting fire to herself in Baroda, India, in 1825, which led inexorably to the banning of the practice of ‘suttee’. Of course, Holland is more sophisticated than to indulge in cultural competitiveness.

Crucifixion provides a powerful underlying image. In ancient times a notably cruel form of punishment, it became a symbol of Christianity’s appeal, showing how suffering humanity can overcome its humiliations. 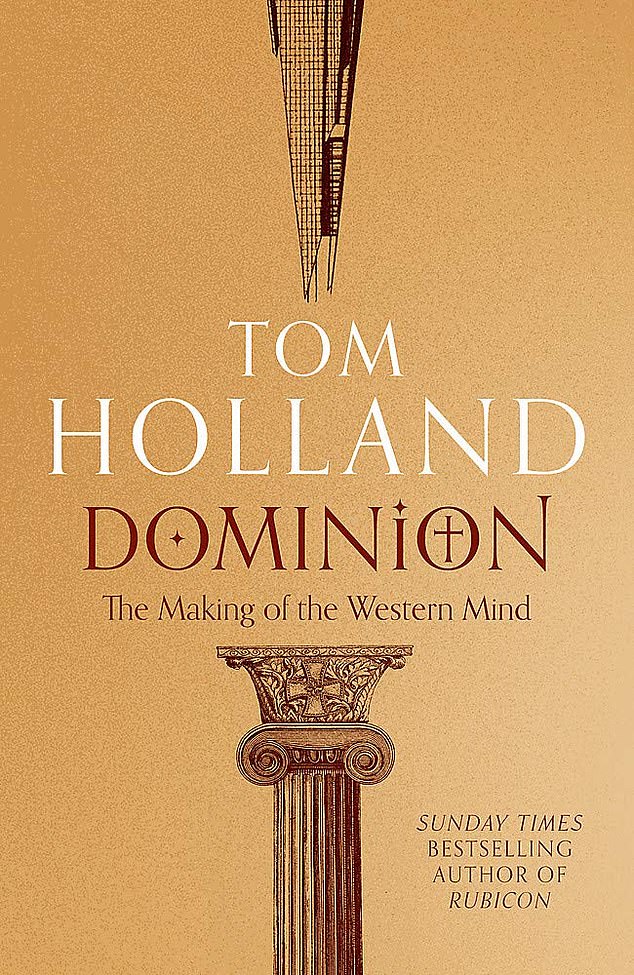 Dominion is essentially a  history of Christianity. Completely comprehensive, it’s also an intelligent and entertaining book, fizzing with ideas

Holland’s argument flows from there – first, that core Christianity promotes the interests of the weaker over the powerful, and second that the West’s progress, whether cerebral, social or even political, has stemmed from this.

He takes us in sprightly fashion through this process. It is good to be reminded of, along with the Emperor Constantine accepting Christianity and the Creed-confirming Council at Nicaea in 325, figures such as Macrina, sister of Saint Gregory, who cared for lepers and abandoned babies in Cappadocia, modern Turkey.

The millennium proved a crucial date. The failure of the Kingdom of God to arrive as forecast led to recurring demands for reform. Gradually the Church became a state at the centre of ‘Christendom’, with legislation centred on the ‘natural law’ that one should ‘love your neighbour as yourself’. Cue all sorts of altruism, from the abolition of slavery to human rights.

Holland places later intellectual achievements, from the scepticism of French philosophes to Darwin’s religion-defying ideas, within the framework of efforts to understand the natural God-given universe. Marx’s designs stem from the Christian premise of giving to each according to his ability.

Nearer our time, The Beatles’ cry ‘All you need is love’ is easy to place. But it led to sexual excess that was challenged by the #MeToo and LGBT movements – the latest manifestations of that empathy for the underdog, which looks back to the Cross.

Occasionally Holland verges on Christian propagandising. It is not the only culture to promote promote humility and contemplation and Marxists, for example, would argue that Christianity flourished as the religion of all-encroaching capitalism.

But Holland is not aiming at being completely comprehensive. His achievement, nevertheless, is to encapsulate so much, so intelligently and entertainingly, in a book that’s fizzing with ideas.