‘The only good news is the victory but we have to improve’: Gerard Pique urges Barcelona to up their game for Champions League clash with Lyon

Gerard Pique fears Barcelona risk defeat in the Champions League at Lyon on Tuesday if they do not improve on the performance produced in their 1-0 victory over Real Valladolid.

By their standards, Barca laboured to a win secured by Lionel Messi’s 43rd-minute penalty, and while they sit seven points clear at the top of La Liga, their influential defender believes they need to significantly improve.

‘We didn’t play well, it wasn’t a good game,’ he told Movistar Partidazo. ‘The only good news is the victory, to get back to winning three points but we have to improve. For Tuesday, we have to be better.

‘If not, it will go poorly. You have to find fluidity and play, that is what has brought us titles. If we don’t speed up the ball, we have possession, and we turn into a weak team. This is what we have to improve because our opponents know it.

‘When you play three or four games in a row, your legs start to get heavy. Sometimes the manager (Ernesto Valverde) asks me and I am here to help the team. Tuesday is another battle.’

It was for a challenge on the 32-year-old Pique that Barca were awarded their match-winning penalty, which represented Messi’s 30th goal of the season but came before another he missed, and Pique added: ‘(Michel) knocked into my back, he unbalanced me and I fell.

The 55-year-old Valverde dismissed concerns about his team’s performance, and also around Messi’s missed penalty. 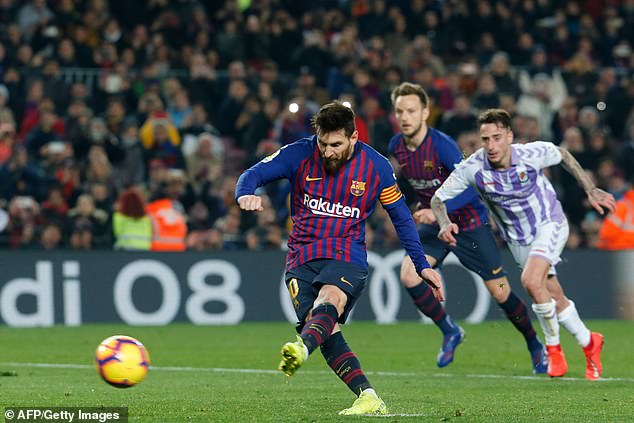 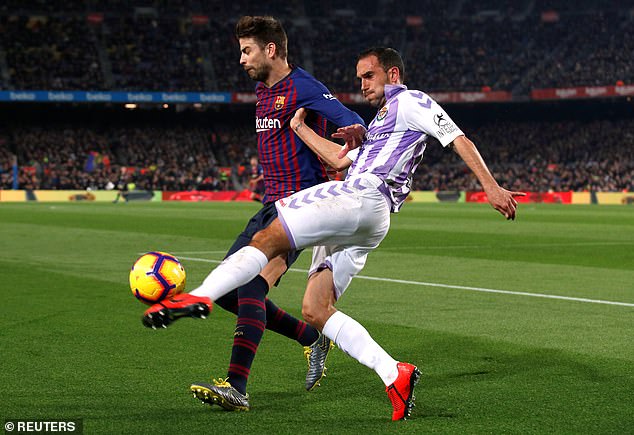 ‘If we are able to generate the chances that we have generated in the second part (of this match), things will go well,’ he told the television channel. ‘In the important matches we have been reliable.

‘I was sure (Messi) would score both. He is quite confident in everything and could make some more goals.’

Valladolid remain 15th and threatened by relegation, but despite them again dropping points, manager Sergio Gonzalez saw cause for encouragement from their performance.

‘We came out stronger from this game,’ said the 42-year-old, according to his club’s official website. ‘We have given a good impression and we can leave the Camp Nou with our heads held high.

‘I’m very happy with my players. They have executed (our tactics) very well.’