Cosi Doerfel, 47, from Munich, slept apart from her Remainer husband for three weeks after they argued about Brexit

Two Remainers almost divorced when one became such a fierce anti-Brexit campaigner that they had to sleep in separate beds.

Cosi Doerfel, 47, from Munich, who lives near Liverpool with her Scottish husband Jim, 49, from Ayre, and their two children, aged eight and 11, slept apart from him for three weeks and even looked for a new place to live when they argued about Brexit.

She had started campaigning with the In-Limbo Project, for EU citizen’s in the UK, as she was concerned about how the UK’s decision would affect her rights.

Cosi, who is disabled and has lived in the country for 30 years, also said that it had forced her herbal teas business to close down, leaving her family reliant on Jim’s electrician job for income.

‘The more time I spent on researching Brexit and the In-Limbo Project, the more my husband did not want to face up to what I was discovering,’ she said.

‘It seemed monstrous to him and he couldn’t believe that what I was saying was true. 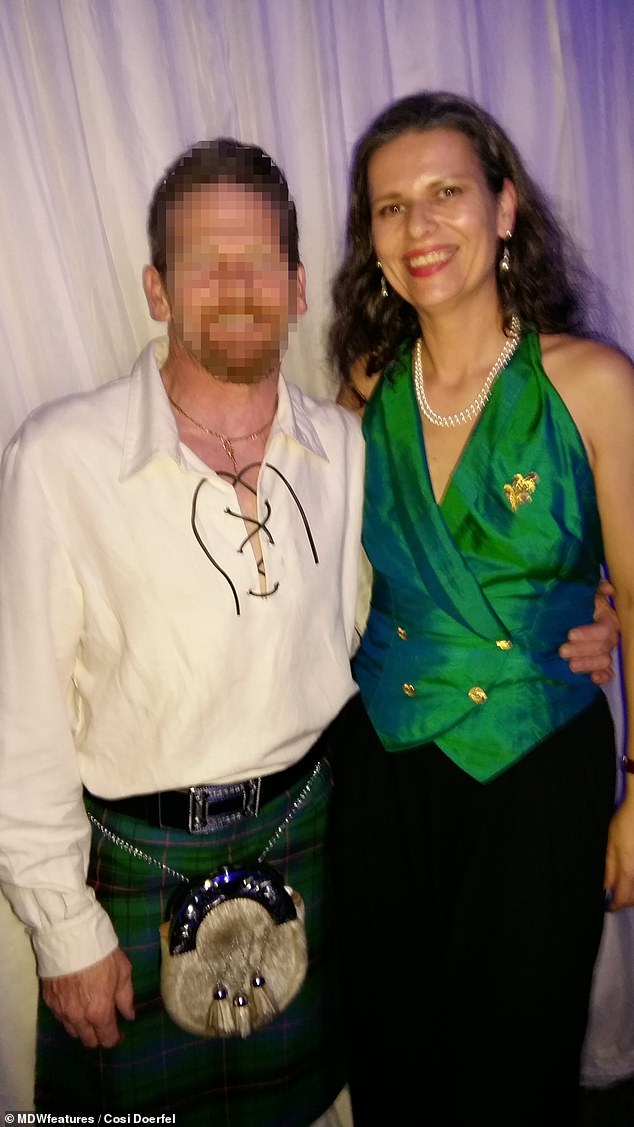 Cosi and her Scottish husband Jim, 49, who works as an electrician, live together with their children near Liverpool 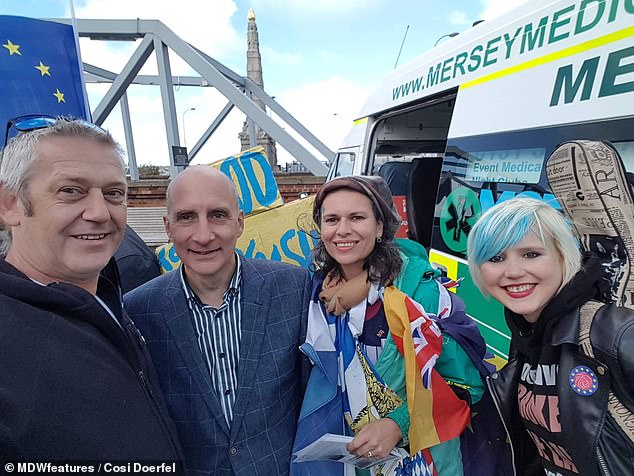 ‘The more time I spent on the computer, reading legal texts and government webpages as well as supporting the In-Limbo group members, the less we spoke.

‘He couldn’t cope with the fact that I was diagnosed with PTSD and that the objectification and insults at the hands of the Home Office and the politicians had caused old wounds to open up and the therapy I was undergoing was also taking a lot of my time and energy.

‘We drifted further and further apart and had more and more arguments until eventually we were sleeping in separate rooms and only living in the same house because neither was prepared to leave the children – we both refused to move out.

‘However, things got so bad and scary that I did actually contemplate moving and enquired at the town hall about what my rights are and whether there was any help available for me.

‘In between this hectic schedule, we had a fight which culminated in him sleeping on the guest bed for about two or three weeks and things became unbearable. 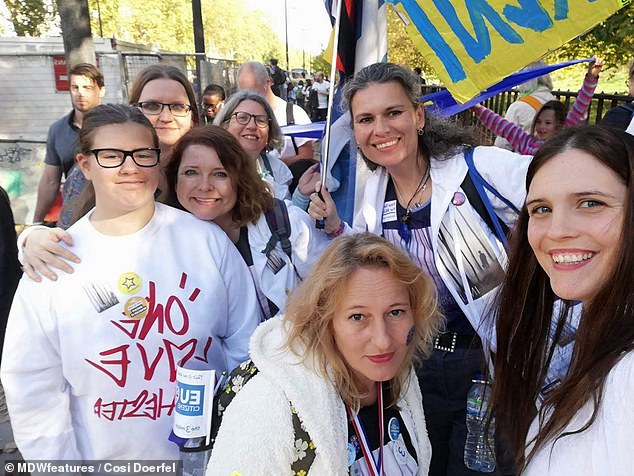 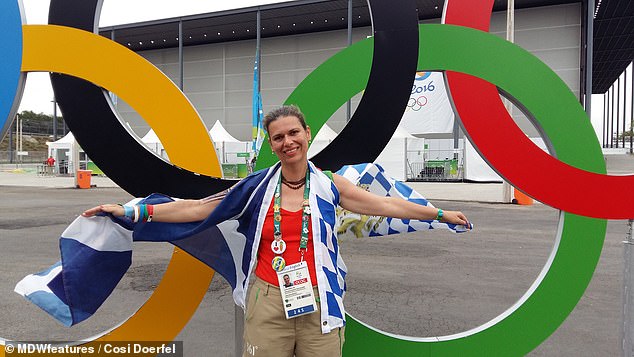 Although the business was yet to provide much income, she had hoped it would help supplement her husband’s wages 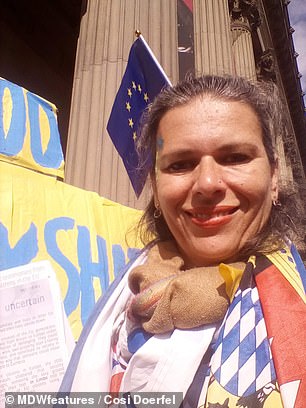 ‘I had to get out and enquired at the town hall about social housing and whether there was any help available if I left at short notice.

‘I was told that here was nothing they could do for me.

‘There wasn’t any domestic violence, so I couldn’t go to a shelter and housing benefit has been scrapped – it’s all universal credit now, but only British citizens can get universal credit.

‘Two days later my husband broke down in tears and said that he was proud of my campaigning against Brexit, that he had been too optimistic thinking that it would never happen, that he admired my strength and fighting spirit and thanked me for campaigning.

‘He also asked whether I was having an affair – to which I laughed and said ‘I wish’. We started talking again; he joined anti-Brexit groups on Facebook, he joined me at anti-Brexit events and has listened to my speeches.

‘It took over a year for my speeches to reach the person who should have been closest to me. He actively campaigns online and at real events, but also looks after the children and the household to enable me to do more in the campaign against Brexit.’ 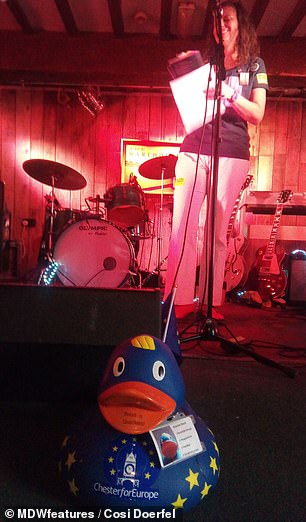 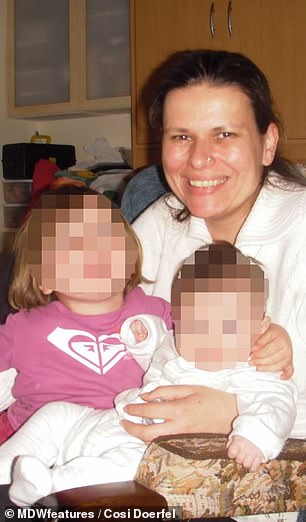 Although she looked at moving out of the Liverpool family home because of disagreements with her husband, she felt she couldn’t leave because of her 11-year-old and eight-year-old children

Cosi has campaigned against Brexit since the 2016 EU referendum.

She is allowed to stay in the UK under the Indefinite Leave to Remain scheme but says the UK government is already going back on some of its promises.

‘Although I have now obtained Indefinite Leave to Remain through the EU Settlement Scheme, I do not know whether the government will stay true to the promises that were made about settled status,’ she said.

‘Several things have already been changed about it, several promises already broken.

‘For example, the time I can be out of the country without losing the status has been reduced from five years to two years.

‘I do not know what the Home Office will do with the data they obtained from me (including facial recognition data, my fingerprints and all my tax records). 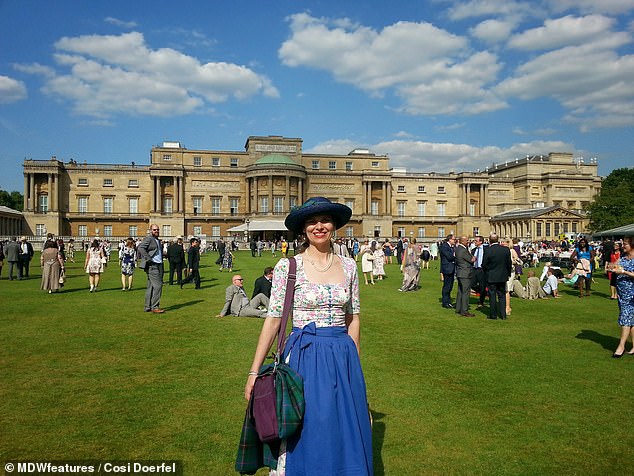 She also said that she can stay in the UK, where she has lived for 30 years, because of the Leave to Remain scheme 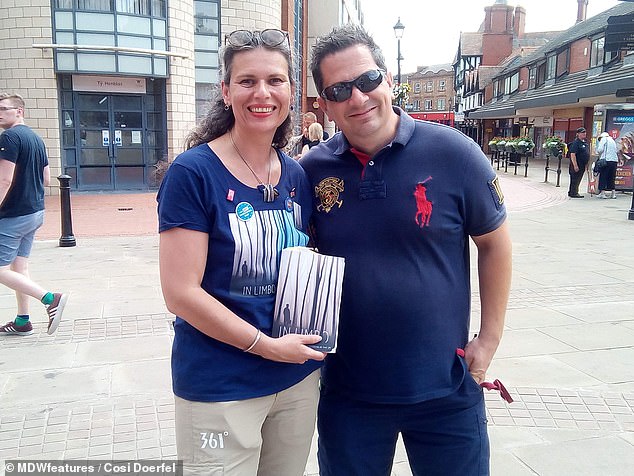 However, she isn’t sure if the government will keep its word. Cosi said the amount of time she can leave the country without losing her status has already been reduced from five years to two

Cosi, pictured here with her husband and daughter, said that Britain’s decision to leave the EU has affected ‘every aspect’ of her life

When Brexit happened she stopped doing a business development course at the Chamber of Commerce. Her business also folded.

‘The business was something I had put my heart and soul into and studied towards’, she said.

‘I went to university to study herbal medicine. I put a lot of brain power into it.

‘I just thought let’s get this stupid referendum out of the way and then I’ll register the business with HMRC and of course the referendum results came out and it was not what I expected.

‘That completely threw a spanner in the works, I may as well throw the last 12 years in the bin.’

With all the family income just coming from her husband, Cosi said that they have had to cut back on expenses such as travel, meaning she gets to see her family less.

‘I’m not available to work and I’m not bringing anything anymore. I’ve had to rely on my husband.

‘There was no money in the business at the time, but I was hoping it could add to the income we rely on.

‘We’ve had to economise even more so that we can still pay for the children’s activities because we prioritise them a lot.’

She also said that Britain’s decision to leave the EU has affected ‘every aspect’ of her life.

‘Having lived in the UK all my adult life means that all my qualifications are British and not recognised elsewhere,’ Cosi said.

‘I have paid National Insurance Contributions for nineteen years and now do not know whether I will be able to get a pension and I am too old to start again in another country.

‘Brexit has affected every aspect of my life; my mental health, relationships with friends, husband, children, everything.’