One of Europe’s largest mosques is to open in Cologne, Germany today.

Turkish President Recep Tayyip Erdogan reported the news during his controversial visit to the country with police deploying in force amid planned protests.

The inauguration will be the closing event of Erdogan’s three-day state visit, aimed at repairing frayed ties with Berlin after two years of tensions.

The sheer size of the Cologne Central Mosque has disgruntled some locals, triggering occasional protests

In talks with Chancellor Angela Merkel on Friday, both leaders signalled their interest in a cautious rapprochement, but Merkel stressed that ‘deep differences’ remained on civil rights and other issues.

Up to 10,000 Erdogan critics are expected to take to the streets in Cologne, protesting everything from Turkey’s record on human rights and press freedom to its treatment of minority Kurds.

About 300 people had gathered on the bank of the Rhine early Saturday. They held banners proclaiming ‘Erdogan not welcome’ and shouted slogans such as ‘International solidarity’ and ‘Away with fascism’. 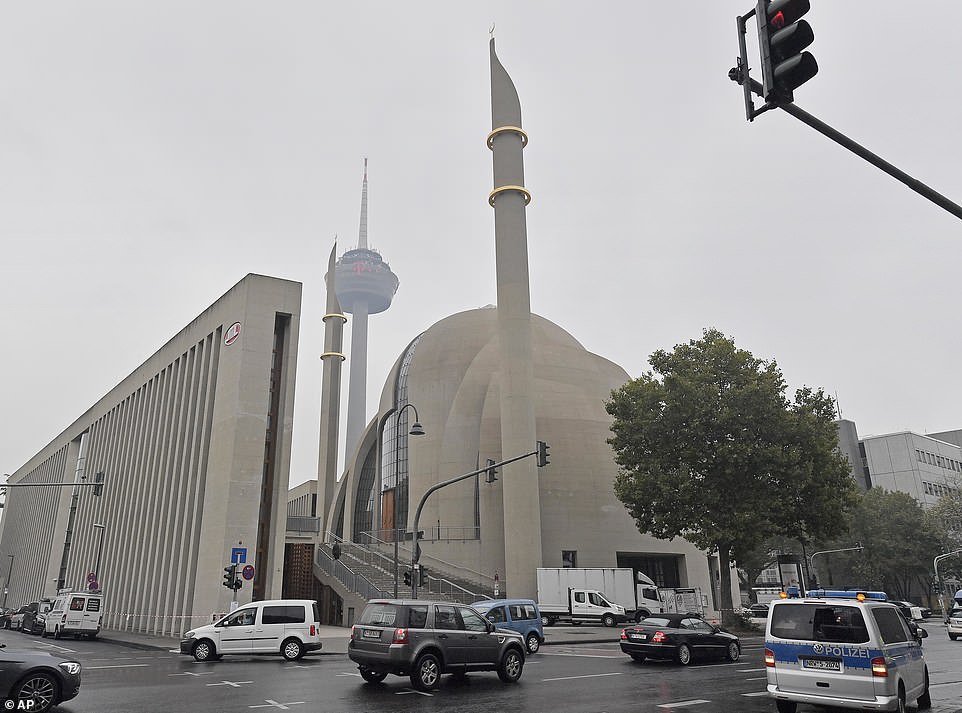 The biggest mosque in Europe was designed to resemble a flower bud opening, and its two towering minarets has disgruntled some locals

Cansu, a 30-year-old student of Turkish origin came from Switzerland for the rally.

‘I want to be the voice of people who can’t take to the streets in Turkey. Because they have been arrested, killed or otherwise suppressed. Erdogan thinks anything that differs from his opinion is terrorism. I am here to show solidarity.’

And Tomas, a German student turned up in a suit spotted with fake blood. He held a giant banner with several other people that read ‘Dictator. Mass murderer’.

‘I can understand that he was invited to Berlin. But that he is coming to Cologne is a provocation. We are here to show: Cologne does not want you,’ the 22-year-old said. 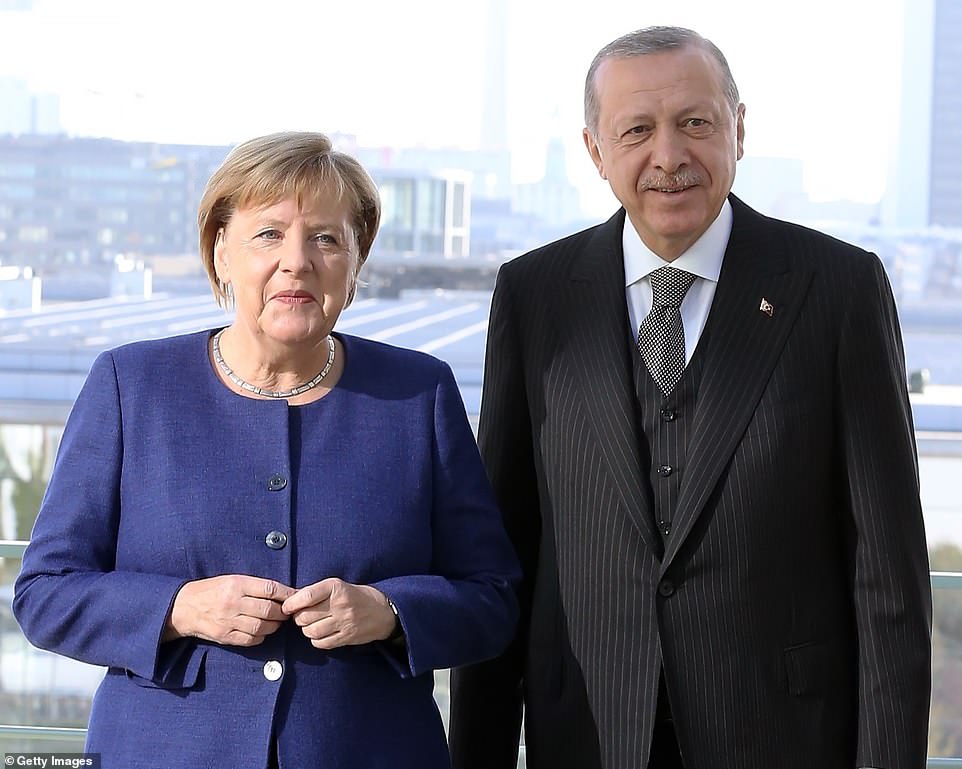 Erdogan supporters meanwhile have gathered at the Cologne Central Mosque, an imposing dome-shaped building next to the shadowy, Turkish-controlled Ditib organisation.

They are expected to gather a few kilometres (miles) away from the neighbourhood of the mosque.

The giant Cologne Central Mosque opened its doors in 2017 after eight years of construction and budget overruns. It can house more than a thousand worshippers. 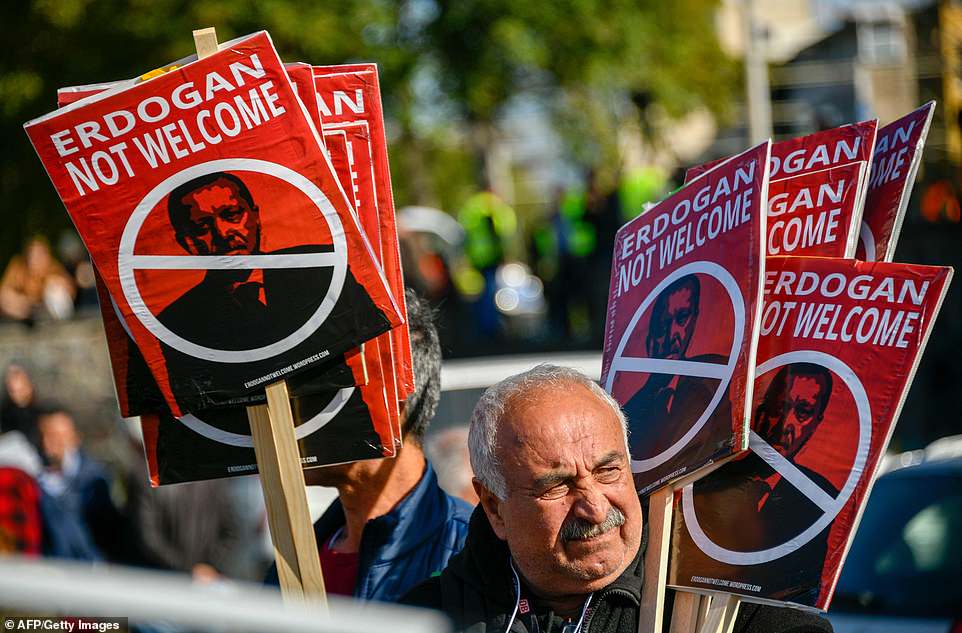 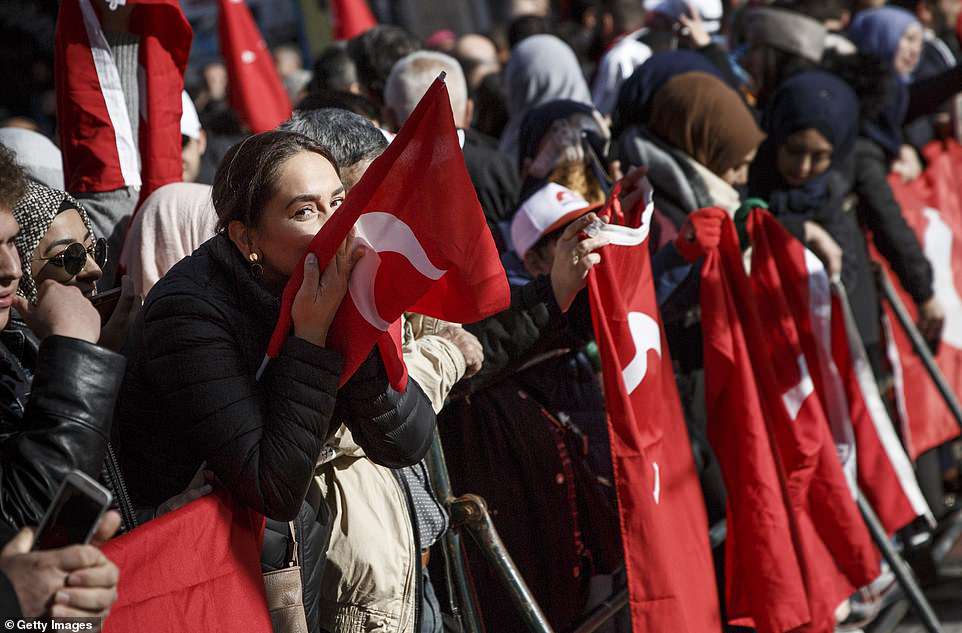 The sheer size of the building, designed to resemble a flower bud opening, and its two towering minarets has disgruntled some locals, triggering occasional protests.

The Turkish-Islamic Union of the Institute for Religion (Ditib) that commissioned the glass and cement structure is itself not without controversy.

The group runs hundreds of mosques across Germany, and its imams are paid by the Turkish state. 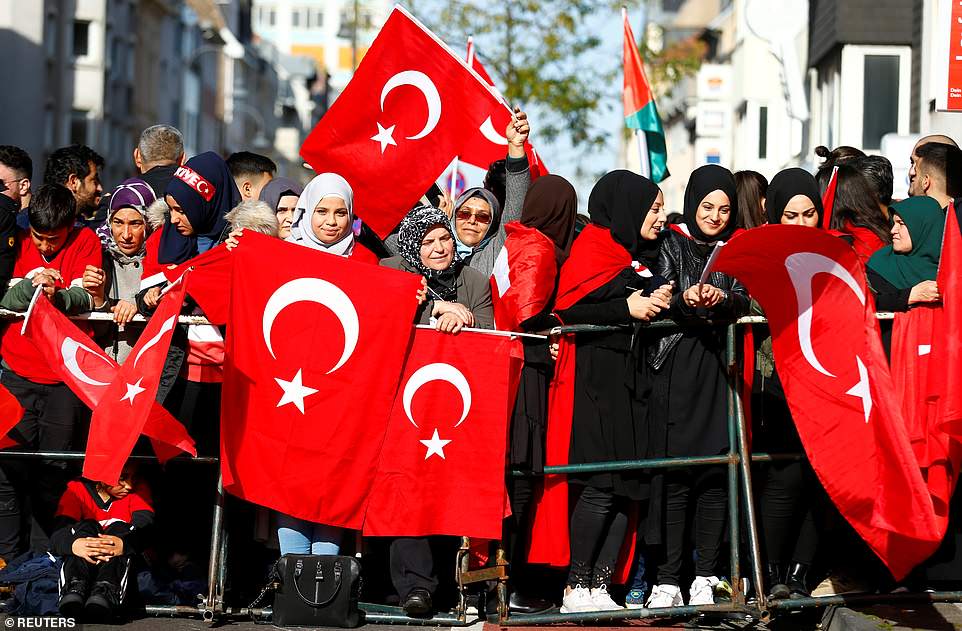 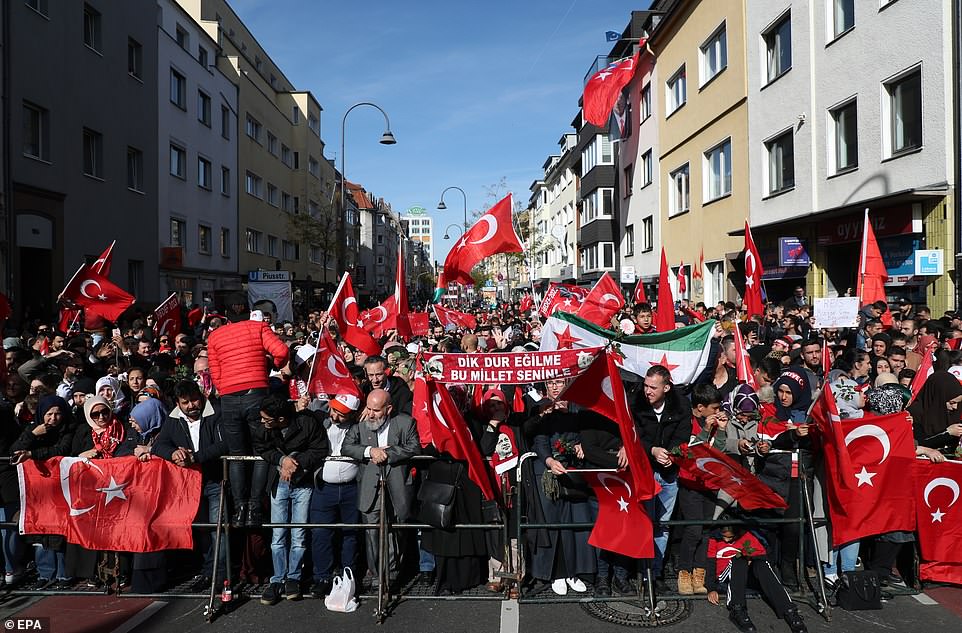 Merkel, whose country is home to more than three million ethnic Turks, stressed the need for continued dialogue to overcome disagreements, particularly ‘in questions about a democratic, open society’.

But she also highlighted Germany’s interest in a ‘stable’ Turkey, a country she relies on to help stem the flow of migrants arriving on European shores. 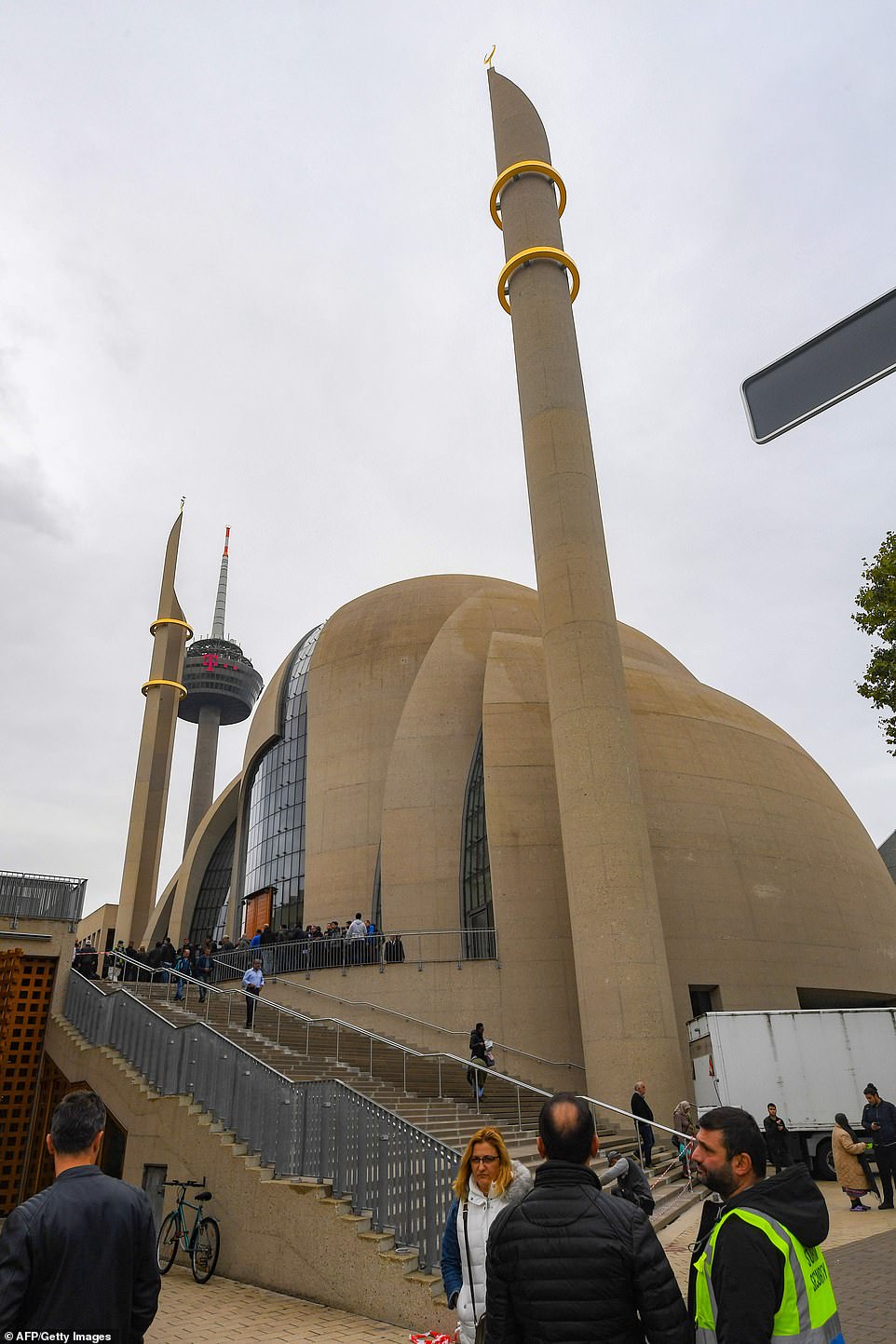 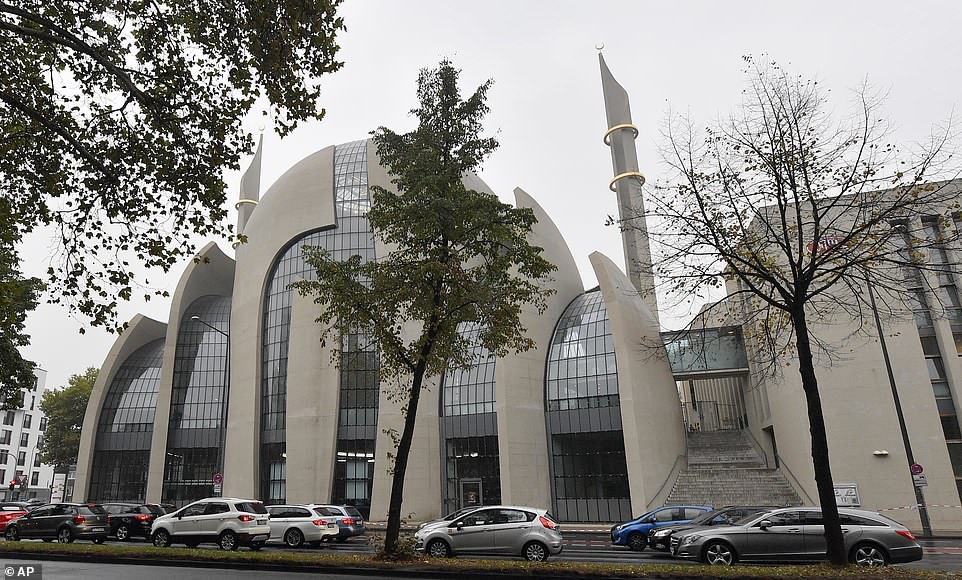