By Stephen Wynn-davies For Mailonline

German police have raided more than 80 properties in 25 cities as part of a major crackdown on a criminal gang, consisting mainly of refugees, suspected of funding Islamist extremists.

Police have identified 67 people, including 44 Syrians, and said most of those in the gang came over to Germany in the wave of refugees that arrived in 2015 following Angela Merkel’s open-door policy.

The other nationalities include 10 Germans, five Jordanians and five Lebanese, with two of these reportedly identified as being a threat because of their suspected ties to Islamic terrorism.

The major police investigation into the gang has involved more than a thousand officers and started after a car accident in May 2020 when police found €300,000 in cash hidden in a bag in one of the vehicles.

North Rhine-Westphalia Justice Minister Peter Biesenbach, 73, described the arrests as a major crackdown against an international money laundering gang that started operating in 2016.

Police have identified 67 people in a gang suspected of funding Islamic extremists. Police said 44 of these are Syrian nationals and that most of the gang came over to Germany in the wave of refugees that arrived in 2015 following Angela Merkel’s open-door policy 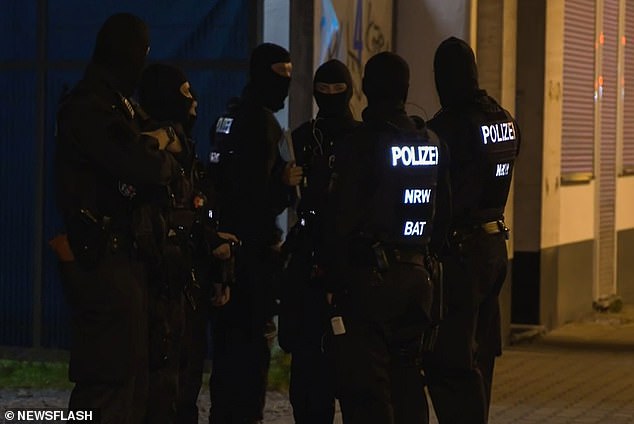 As well as the people arrested, police said they also seized cash and top-of-the-range cars including a €330,000 Lamborghini Aventador that was seized in Düsseldorf, a Lamborghini Urus worth €220,000 and a tuned-up Porsche 911.

There are also other luxury items including a €150,000 Burmester stereo sound system with speakers worth an additional €30,000, police said.

In bank safety deposit boxes, officers found €794,000 connected to the gang and in another safe in one of the properties, they found €500,000. They also seized jewellery, watches and gold, police said.

The gang also invested in property worth hundreds of thousands, according to police, and despite their enormous wealth even managed to get extra money in social welfare benefits.

The police say that the cash was used to fund a network of terror organisations such as the Al-Nusra-Front, linked to Al-Qaeda.

The raid happened in cities in the German states of North Rhine-Westphalia, Lower Saxony and Bremen with 11 arrests.

The money was believed to have been earned by the gang’s criminal activities including extortion, drug trafficking, robberies and kidnapping, with the total amount flowing through the hands estimated to be over €140 million. 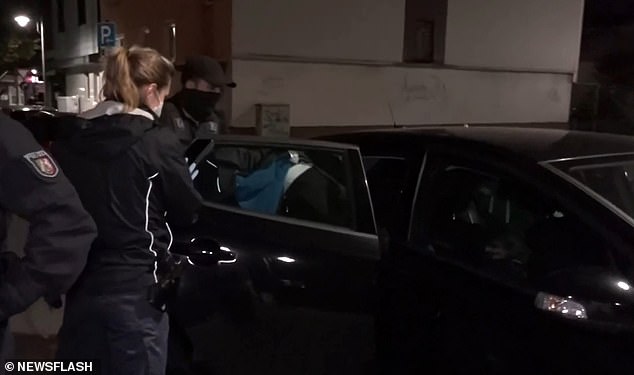 A total of 11 people have been arrested after raids were carried out in cities in the German states of North Rhine-Westphalia, Lower Saxony and Bremen

North Rhine-Westphalia’s Interior Minister Herbert Reul said: ‘The gang’s criminal activities are made all the worse by the fact that they bring into disrepute the genuine refugees who have a real need to seek protection in our country.

‘It is sickening that there are a few people who claim they want to build a new life here away from war and then use that to commit serious crimes.

‘It’s made even worse in cases like this where the money they obtain goes back to the Middle East, presumably to finance more war and terror there.’

Police say that they also seized numerous computers and laptops which are now being evaluated to assess the money laundering network used by the gang.