A town in Germany is considering halting the arrival of refugees amid worries it can no longer provide enough school places.

Freiberg council is planning to vote on whether or not to ban asylum seekers from coming to the picturesque Saxon university town until December 2019.

Its mayor, Sven Kruger, said: ‘We need a break in order to deal with acute needs.’

Freiberg council is planning to vote on whether or not to ban asylum seekers from coming to the picturesque Saxon university town until December 2019. Pictured: The town centre

According to The Local, Kruger, a member of the left-wing Social Democrats party, added: ‘We don’t want to endanger the work done thus far on successful integration.’

The primary concern in the town is over a lack of school places.

There is already a shortfall of about 300 kindergarten places and 12 school classes, according to Welt. 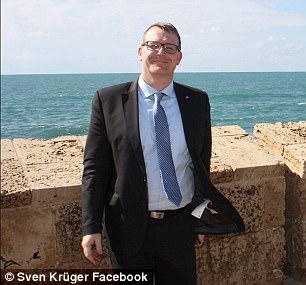 Its mayor, Sven Kruger (pictured), said: ‘We need a break in order to deal with acute needs.’

He has also said the settlement has received such large numbers of children that it ‘cannot fulfill the legal entitlement to a kindergarten place or compulsory education’.

The mayor said some of the schools in his town have an average of 30 per cent of pupils who do not speak German as a first language.

At some schools, 43 per cent of pupils speak German as their second language, he added.

Saxony’s interior ministry, meanwhile, said a ban on newcomers could be necessary to ‘avoid social and societal exclusion’.

Last year, the town sent a letter to Chancellor Angela Merkel requesting hundreds of thousands of euros to assist in costs associated with integrating migrants.

Over a million migrants from around the world have come to Germany since Chancellor Merkel opened the country’s doors during the migrant crisis of 2015.