A German TV show has ridiculed the state of Brexit negotiations – saying that like in football ‘in the end England loses’.

The show on the Das Erste channel mocked Theresa May, who is facing a titanic battle to get her deal passed by MPs amid overwhelming opposition from all political parties.

And it poked fun at leading Brexiteers and Tory MPs Nadine Dorries and Dominic Raab, accusing them of massively underestimating the scale of the Brexit task.

Summing up Brexit, the presenter said: ‘So to summarise, and based on Gary Lineker: Brexit is an easy game- 65 million Brits are chasing a ridiculous idea and at the end England will always lose.’

And he also took aim at the British spy hero James Bond as he pilloried the state of the talks.

Predicting what a post Brexit future will look like, he said: ‘So every After Eight would need a visa, James Bond could no longer hunt international bad guys – he’d spend the whole two hours of the film at passport control.’

Mrs May is under massive pressure as she desperately tries to drum up support for her Brexit deal in the face of fury from all opposition parties and over 90 of her own MPs.

She faced a two-and-a-half-hour mauling as she defended her deal in the House of Commons yesterday – with Remainers and Brexiteers uniting in urging her to go back to the negotiating table.

And she is facing fresh blows today after Donald Trump said he does not think the UK will be able to do a trade deal with the US under the terms of the deal.

While ex loyalist Sir Michael Fallon has also broken ranks with the leadership and declared the PM’s Brexit deal ‘doomed’.

But she is sticking to her guns on her deal and will over the next two days travel to all four parts of the UK to defend her deal as part of her Brexit PR blitz.

However, in a sign that Europe are gleefully mocking the disarray in Britain, the German TV presenter said that Britain is ‘in the sh**’.

He said: ‘Unfortunately the Brits have gone into Brexit completely without a plan like someone who jumps off a ten metre diving board with no idea what’s in the basin.

‘Theresa May really wobbled around for a long time, and then after a long back and forth she negotiated a draft contract with the EU, but at home it’s not been welcomed as suspicion is building towards her.’ 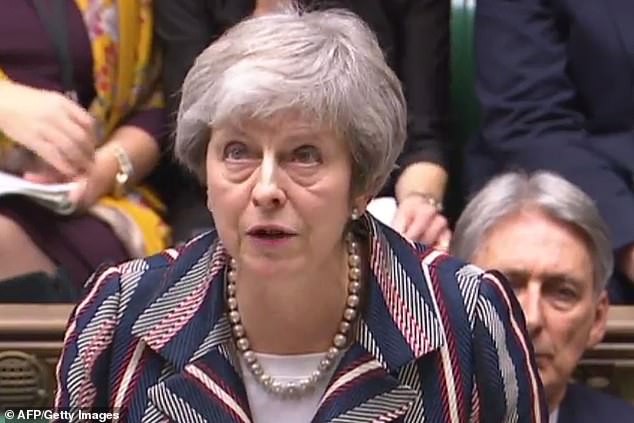 And he gleefully warned that if the UK crashes out of the EU with no deal then Britain’s eocnomy will tank.

He said: ‘The economy would totally go down the drain, the pound would lose value, trade would become extremely complicated.’

The mocking put-down comes as the PM is battling to keep her Brexit deal on the road today after Mr Trump savaged it as ‘great for the EU’ – and warned it would hit trade with the US.

No10 furiously rejected the dramatic intervention from the President – which echoed the complaints of Brexiteers and threatened to kill off the package altogether.

As the PM’s allies reeled from the blow, one government minister highlighted a tweet claiming Mr Trump was aiming to ‘finish off’ Mrs May. And Cabinet Office minister David Lidington said bluntly that the President was ‘wrong’.

But senior Tories and Eurosceptics seized on the extraordinary intervention from the White House with glee – saying it could not be ‘brushed off’ and Mrs May must reopen negotiations with Brussels.